Despite all the work it needed, an eighteenth-century house won author P.J. O’Rourke’s heart from the get-go.

Every old house has a unique history of who’s done what and why. While most of these stories are pretty predictable in light of when the home was built, some buildings have stories that are hard to imagine. A case in point is P.J. O’Rourke’s house near Peterborough.

O’Rourke is the best-selling author of fifteen books and his sixteenth, The Baby Boom—How It Got That Way…And It Wasn’t My Fault…And I’ll Never Do It Again, was published in January by Atlantic Monthly Press. He’s also written for numerous publications, including Rolling Stone and the Atlantic, and has established himself as America’s premier political satirist. Time and the Wall Street Journal have called him the “funniest writer in America,” and he frequently appears on television and National Public Radio’s Wait, Wait, Don’t Tell Me.

O’Rourke found his way to New Hampshire after visiting a college friend and his wife in Jaffrey in 1979. He was living in New York at the time and wanted a place outside the city. When a two-bedroom cottage in Jaffrey with a lovely view and fifteen acres came on the market that year, O’Rourke couldn’t refuse. He bought the property even though it needed work. “I couldn’t get a parking spot in New York City for $66,000,” he says, “and I thought, ‘What do I have to lose?’” A couple of years later, he became a freelance foreign correspondent and took his accountant’s advice to become a New Hampshire resident.

He lived in that house for ten years, but the time came when he and his wife, Tina, needed a bigger house with room for a family that now includes three children and four dogs. So he got back in touch with real estate agent Heather Peterson, who sold him the first house. “Both times I told her what I wanted, and both times I bought the first house she showed me,” he says. “When we drove up the driveway, I saw this house and said it was the house my mother always wanted. She had always loved Colonial architecture, and although she had been dead for fifteen years, this house really struck a chord.”

The house, on a beautiful eighty-acre site with a spectacular view of Mount Monadnock, was built in Walpole in the 1790s. In 1939, it was taken apart and moved to where it now stands. “It was put together again in 1940 with some unfortunate additions,” O’Rourke says.  Although the paneling in the living room, the pumpkin pine floorboards and the main beams date back to 1790, the siding does not. Nor do the woodwork details and the ceiling. While the previous homeowners were interested in preserving Colonial architecture, “they weren’t sticklers for accurate details,” O’Rourke says. That’s putting it mildly: in a hysterical Wall Street Journal piece published in October 2013, he calls these homeowners “amateur architects” and refers to them as “Mr. and Mrs. Frank Lloyd Wrong.” O’Rourke surmised that after the house was dismantled, “mice ate the plans.” When workmen finished putting the house back together, “they had so many parts left over that they built a barn with them. Our chickens scratch authentic, antique twenty-four-inch wide pumpkin pine flooring and roost on fireplace mantles that, for all I know, were hand carved by Duncan Phyfe.” O’Rourke continues, saying that Mr. and Mrs. Wrong “tacked on random boxy additions in an architectural style that might be called Old Sturbridge Village Self-Storage.” 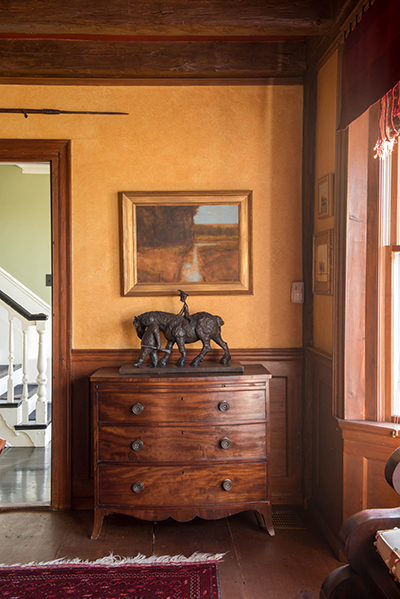 In the dining room is Patrick Oliphant’s 2007 sculpture called Bush, Cheney and the Country. Above it hangs a landscape by Maryland artist Kevin Fitzgerald and over the door is a spear from South Africa used for killing lions.

O’Rourke already had renovated an old house and says he “learned the hard way that you don’t do the cosmetic stuff first.” The house’s wiring and plumbing systems dated from 1940 and the insulation wasn’t very good, so he began with those projects.

The house also had “a hideous picture window in the dining room” and an “ugly” bay window in the living room. “It was very 1970s and made up of three, great big sheets of floor-to-ceiling insulated, twin-paned glass that got all fogged up on the inside,” O’Rourke says. “The result was just awful.”

There was also grass cloth wallpaper and a playroom “box” added on to the house. “The porch was walled in to waist height and also walled in from the top, so there was only a narrow view down to the mountain. One whole wall of the porch had jalousie windows and a fake tile concrete floor. It was terrible.”

So O’Rourke went to work with Andy Weber, a contractor from Jaffrey. “I asked him to put a pair of bay windows—one in the living room, one in the dining room—so it would look like it was a one-hundred-year-old aesthetic error instead of a twenty-year-old error,” O’Rourke says. “Because rooms in these center-hall Colonials are not huge, the bay windows actually work. They make the room appear a lot bigger.”

Published in January by Atlantic Monthly Press, O’Rourke’s newest book has been called “a terrific American memoir” and his “best book ever” by fellow author Christopher Buckley.  O’Rourke appears at The Music Hall in Portsmouth on April 16.

Other projects included putting a screened porch on that “awkward” addition to the house and transforming the “rather lumpy-looking three-bay garage attached to the house.” The garage area was so big that it became a mudroom, a breakfast room, a coat closet, a laundry room, a one-bay garage and a storage shed. “This was without altering the footprint,” O’Rourke adds. “We have not altered the footprint of any part of the building.” As work proceeded on the mudroom, the kitchen expanded into what had been the garage and got a little more space.

When it came to decorating the home, O’Rourke says that was easy. “The décor is ‘Me and Tina Random,’” he says. “I spent twenty years filing stories from forty different countries and brought things home. I’ve always liked folk art, so a lot of what you see around this house are things from various expeditions.”

In the living room—O’Rourke’s favorite room in the house, because of its original woodwork and the view—are an Australian aboriginal painting, a cross from Mexico, figures from Paraguay, baskets from the Philippines, another cross from Ethiopia, a bellows from Syria, Inuit sculptures, and wooden masks from Cuba and Tanzania. Near the fireplace is a lamp next to a modern leather chair where O’Rourke likes to read. “I have a bad back, which was an excellent excuse to pay too much for an Eames chair,” he says. “But it really does work.”