A perfect and functional makeover for a family

A spacious Windham home gets a family-friendly renovation that adds warmth, function and an English pub-style game room.

Fifteen years ago when Steve and Andrea VanSeters were looking for a home to accommodate their growing family, the couple opted for new construction in an appealing Windham neighborhood. Not only did the five-thousand-square-foot home offer room to grow (it had four bedrooms, four bathrooms, a finished basement and a large garage with a second story), the property was a blank slate awaiting the VanSeterses’ finishing touches and style.

“We liked the look of the house—it has a hip roof and is not a traditional Colonial—and it was pretty empty inside,” Steve says. “We found the fact that we were able to customize the interior and landscaping
very appealing.”

Andrea adds that the couple had anticipated finding a finished, move-in ready home, but as they looked at existing properties, they didn’t find many that matched their style.

“Then we came across this big, beautiful house we could design from scratch—we had to choose almost everything,” Andrea says, recalling that they bought the home after their son was born and their second child was on the way.

The home’s interior evolved over the years as the family’s needs changed.  When the children started to outgrow the playroom in the finished basement, Steve and Andrea created a second play space in the finished seven-hundred-square foot space above the garage.

In time, Steve and Andrea envisioned an adult-friendly makeover for that playroom, a space where they could entertain friends and family, play pool, and watch movies, the Boston Red Sox or the New England Patriots.

“The room over the garage started as a playroom for the kids,” Steve says. “They enjoyed it, but as they got older, we wanted a place that was separate from the house where we could entertain.” 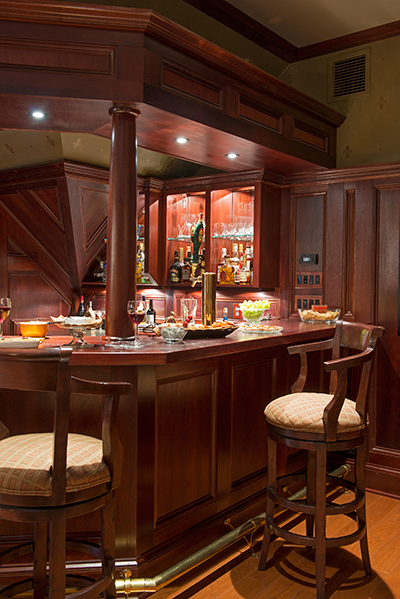 Family and friends enjoy cozying up to the custom-crafted mahogany bar for a beverage, snack or conversation.

While exploring ideas for redesign, they flipped through New Hampshire Home and came across an English pub-style game room designed by Anne Cowenhoven of Accent & Design in York, Maine. The images provided inspiration, but it was Cowenhoven’s expertise that created a room with the personality, pizzazz, features and furnishings on Steve and Andrea’s wish list: a piano, pool table, fireplace, bar and stools, large television, and comfortable area in which to sit.

Cowenhoven’s design team included award-winning cabinetmaker and woodworker Loran Smith, who has since relocated to Boulder, Colorado, and artist/muralist Judy Dibble of Brookwood Designs of Hopkinton.

Smith custom-crafted the bar, the beams, the woodwork, the wainscoting and every piece of molding. Mahogany was chosen throughout. “We were looking for that English-pub feel,” Steve says, “and that was one of the wood choices we felt would be a good fit. We wanted something distinct from the wood we had in other parts of the house, such as the cherry or red birch in the kitchen.”

The old carpeting was removed and replaced with hardwood floors. Cowenhoven designed the paneling that was installed along three walls, and Smith built bookcases into the fourth. The wall with the gas fireplace includes cozy, built-in window seats based on Cowenhoven’s design.

A beautiful oriental rug from Mir Sultan Oriental Rugs in Bedford anchors the space with tones of rich browns and greens. Dibble painted the faux-finish, olive-green glaze with a gold fleur-de-lis pattern. Cowenhoven re-covered the pool table with the same shade of olive- green felt, to match the wall. The bar was built into a corner to make use of the plumbing layout. 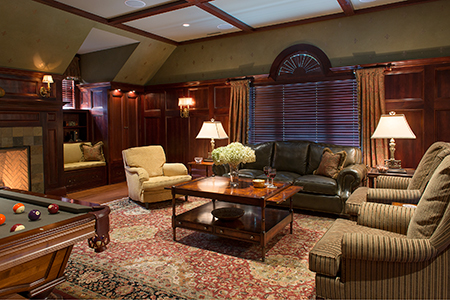 Luxurious, woven drapes in a paisley design, an Oriental rug and other furnishings add depth and harmony to the seven-hundred-square-foot game room.

“We’ve had some great parties up there,” Steve says. Andrea adds that another advantage to having both a game room and a playroom downstairs is that friends don’t have to find a babysitter in order to visit. The kids can enjoy the amenities of the well-appointed play space while the adults retire to the comfortable English pub upstairs—without having to drive.

As part of this renovation, a smaller room off the entryway was redesigned as a library and home office. Features include custom-built bookshelves in cherry, with matching ceiling beams, paneling, a custom desk and, last but not least, painted ceiling panels in tones of rich gold and red.

“The ceiling is incredible thanks to Judy,” Andrea says. “She’s extremely talented.”

Another major change was the redesign of the family room next to the kitchen. The space had been decorated years earlier, but the family did not utilize it fully.

“The room was challenging,” Andrea says. “It has a lot of windows, with the fireplace on the far wall opposite the large, open entrance. It was hard to figure out where to put seating and how to make it all work. The room was pretty, but it didn’t draw me in. Now, with Anne’s help, it’s a room that we thoroughly enjoy every day.”

“It was hard to picture how the furniture would be arranged in a way that didn’t feel too segmented and would allow for interaction. Anne got to know a lot about what we like to warm up a room,” he says.

“The room’s dynamics didn’t work for the family,” Cowenhoven says. “We took out the carpet and installed hardwood floors.” New furnishings included a big sectional couch in brown and black tweed that can seat seven or eight people, a piece she says “fits the room perfectly.” Her redesign also included new wood wainscoting, built-in window seats and bookshelves with built-in lighting.

Notable features are the room dividers and columns in the family room. They were originally painted all white with wainscoting, but by the time Dibble worked her magic, the tops were faux-finished to look like granite and the white dividers painted in a faux-wood-grain to match the rest of the room.

Dibble says, “I love working with Anne. She is so creative. She gets these great, fun ideas to interpret into art.”

With improvements in style, comfort and function, the VanSeters family can fully enjoy their home with family and friends.

“We love it,” Andrea says. “We’re so happy with everything.”

More photos from this feature: