Fritz Wetherbee’s Acworth house complements his passion and his work. 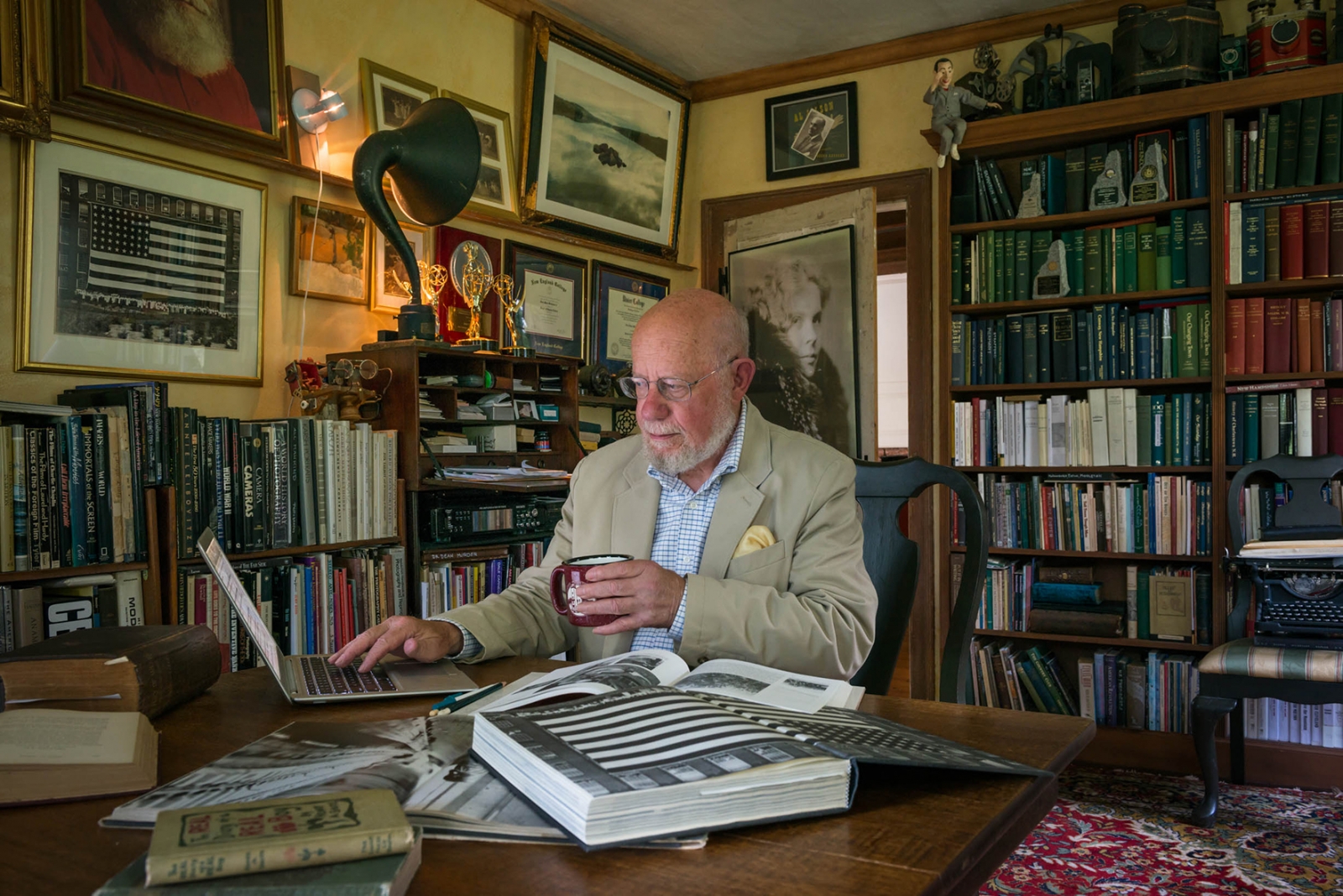 Fritz Wetherbee works in his library at home, which has a collection of more than two hundred New Hampshire town histories, among other books. On the bookshelf to his right are his five New England Emmys along with a Morning Glory speaker and Atwater “breadboard” radio, circa 1923, that belonged to his grandfather. Looking over his shoulder is a poster-size photo of his mother, Mary Catherine Butler, at age sixteen; the photo was taken by C. Edward Powers in his Milford studio in 1923.

For the first half of his fifty-three-year career, we could only read his stories or listen to them on the radio. Since 1986, we’ve been able to put a face to the man who’s become known at “the voice of New Hampshire,” according to the New Hampshire State Council on the Arts, which presented him with a special award for such in 2011. Wetherbee’s television career began as host of New Hampshire Public Television’s New Hampshire Crossroads, and since 2000, he’s been featured on WMUR’s New Hampshire Chronicle, where each of his segments begins with “I’ll tell you the story.”

Because of his boundless curiosity, almost photographic memory for details and enthusiasm for history, viewers have been rewarded with more than three thousand wonderful stories on air (and more than a thousand in print) from every era and every corner of the Granite State. It’s no wonder his work has been recognized with five Emmys; he’s also written eight books, received two honorary doctorates and won many other awards.

The front façade of Fritz Wetherbee and Laura Walker’s Acworth home is a brick Federal-style house added
to the Cape by Lemuel Lincoln in 1800.

New Hampshire Home asked Wetherbee to tell us a story no one’s ever seen on television—the one about the home in Acworth he’s shared with partner Laura Walker since 2003. The house is a combination of two architectural styles: a Cape built by Dawson Russell in 1795 with a “brick-ender” Federal-style house added to the roadside façade by Lemuel Lincoln in 1800. “Lincoln was the town’s first tanner,” Wetherbee says. “From 1800 on, the property has been called ‘Brick Ends.’”

The home sits just down the hill from the beautifully restored Acworth Meetinghouse. The 1821 building was honored in 2011 by the National Trust for Historic Preservation for the town’s extraordinary efforts—nearly everyone in Acworth contributed to the $1 million steeple repair, which was done by local craftsmen over five years, and other work to the building.

Wetherbee says the centers of many towns—Acworth included—were built atop grassy hills. “Farmers liked to graze their sheep and cows on these high meadows,” Wetherbee says. “And after church or town meeting, it was a downhill walk back home.”

Fourteen or so years ago, when Wetherbee came to research a story about an 1824 macabre grave robbery at the Acworth cemetery, he saw the for-sale sign at Brick Ends. He was instantly smitten with the house’s perfectly proportioned design and brought Walker to see it, since they had been on the lookout for something bigger than their Portsmouth apartment. “I looked at Laura, and she looked at the house as if she’d seen Clint Eastwood,” Wetherbee says with a chuckle. He and Walker also liked the property’s four acres and the trees that had been growing there for centuries. So they made an offer, and soon the house was theirs. 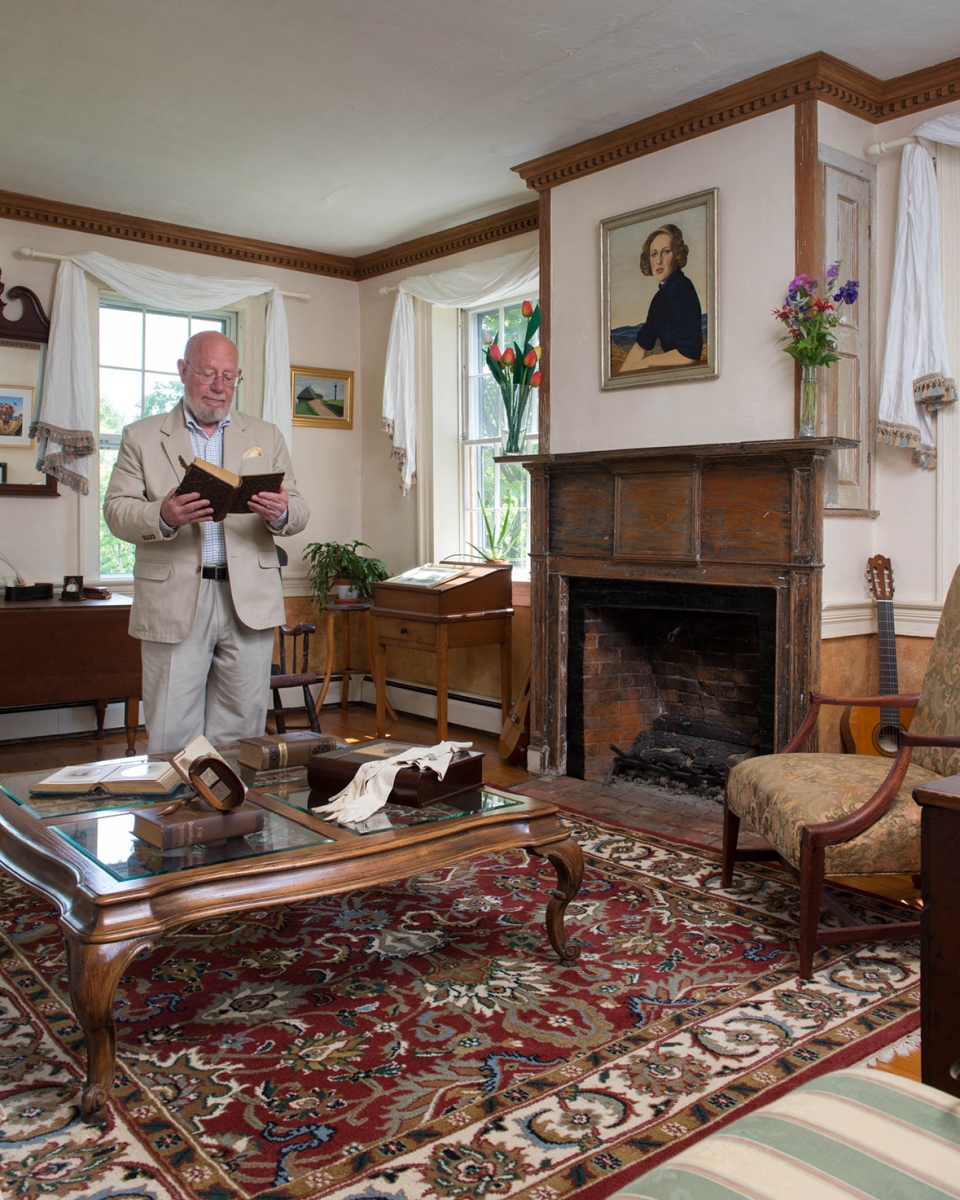 Fritz Wetherbee picks up a photo album from the coffee table in the parlor. Over the mantel is an oil painting of Bette Davis by Richard Currier in 1927, when Davis was a student at the Mariarden Theater in the Woods in Peterborough.

Polishing a diamond in the rough

Although Walker says, “We love homes with history, and this one has such good bones,” the couple had their work cut out for them. The house was “a real fixer-upper,” Wetherbee says. “Nothing was sagging more than it should, but the house needed new plumbing, a new furnace and a new septic system.”

The house also needed new windows, new exterior paint, and a new pediment and pilasters around the front door; the front door is original to the house and the pilasters came from Vermont Salvage Exchange in White River Junction, Vermont. “We didn’t want to touch the walls in the front of the house, out of respect for what went before us,” Wetherbee says. But he and Walker did insulate the Cape part of the house. “We found all sorts of stuff in those walls—spoons, knives and even an old clothespin that was made in an Acworth factory,” he says.

Throughout the house, the couple also replaced all the doorknobs with latches. 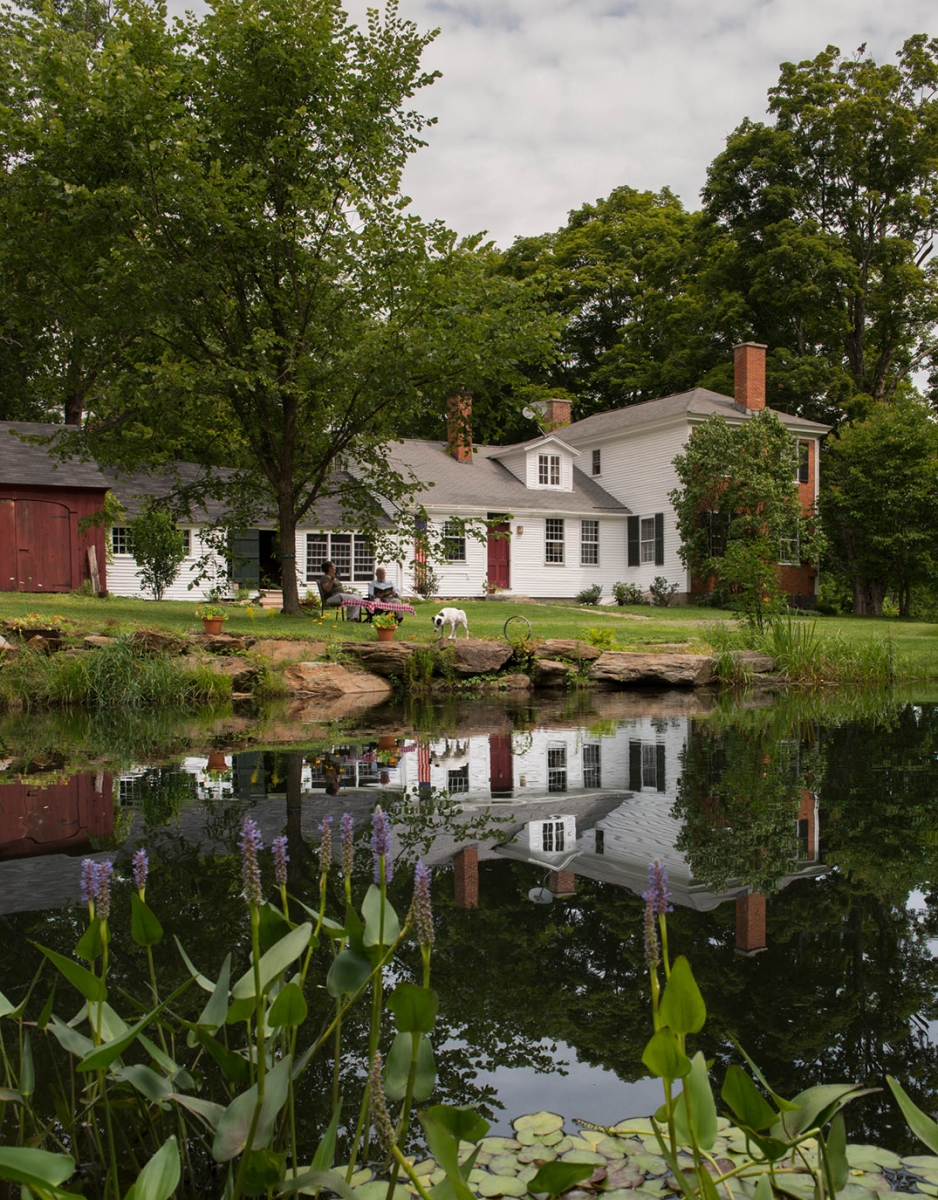 Fritz Wetherbee, Laura Walker and their grand-dog Little, who spends summers in New Hampshire and the rest of the year in New York City, relax and enjoy views of the pond and garden.

Not a lot has changed as far as the house’s floor plan. In the Cape part is the kitchen, Wetherbee’s office and what the couple refers to as the “hunker-down room.” Wetherbee says, “This room used to be the Cape’s kitchen and still has the original brick fireplace/oven.” In the Federal part of the house are a lovely entry hall, a parlor, a dining room and a full bath on the first floor; on the second floor are three bedrooms and another full bath.

Throughout the restoration process, Walker says she and Wetherbee were inspired by James L. Garvin’s book, A Building History of Northern New England. “We tried to use old materials and techniques where we could, and stabilize what was here,” she says. “Most of the changes were done with reverence for the old, and both of us have a deep sense of stewardship for this building’s lovely old bones.”

Outside, Wetherbee and Walker cleared an area and built two ponds where a stream ran intermittently in spring. Walker rebuilt the nearby garden, added a pebble path and planted a twisted Japanese cherry tree surrounded by pachysandra.

“When we first moved here, I put in more gardens than I could possibly tend to. Since then, I’ve gotten rid of some. Fortunately, a neighbor two houses away provides us with fabulous vegetables.”

Life in Acworth is good for the couple. Although more than forty restaurants in Portsmouth were only a five-minute walk away, “All we have to do here is call our friends,” Walker says. “Everyone brings a plate of food, and we call it ‘Tavern Night.’”

Other benefits include easy and available parking and no traffic lights. “I’m a country boy at heart,” Wetherbee says, recalling how much he enjoyed living in Jaffrey and Hancock back in the day. 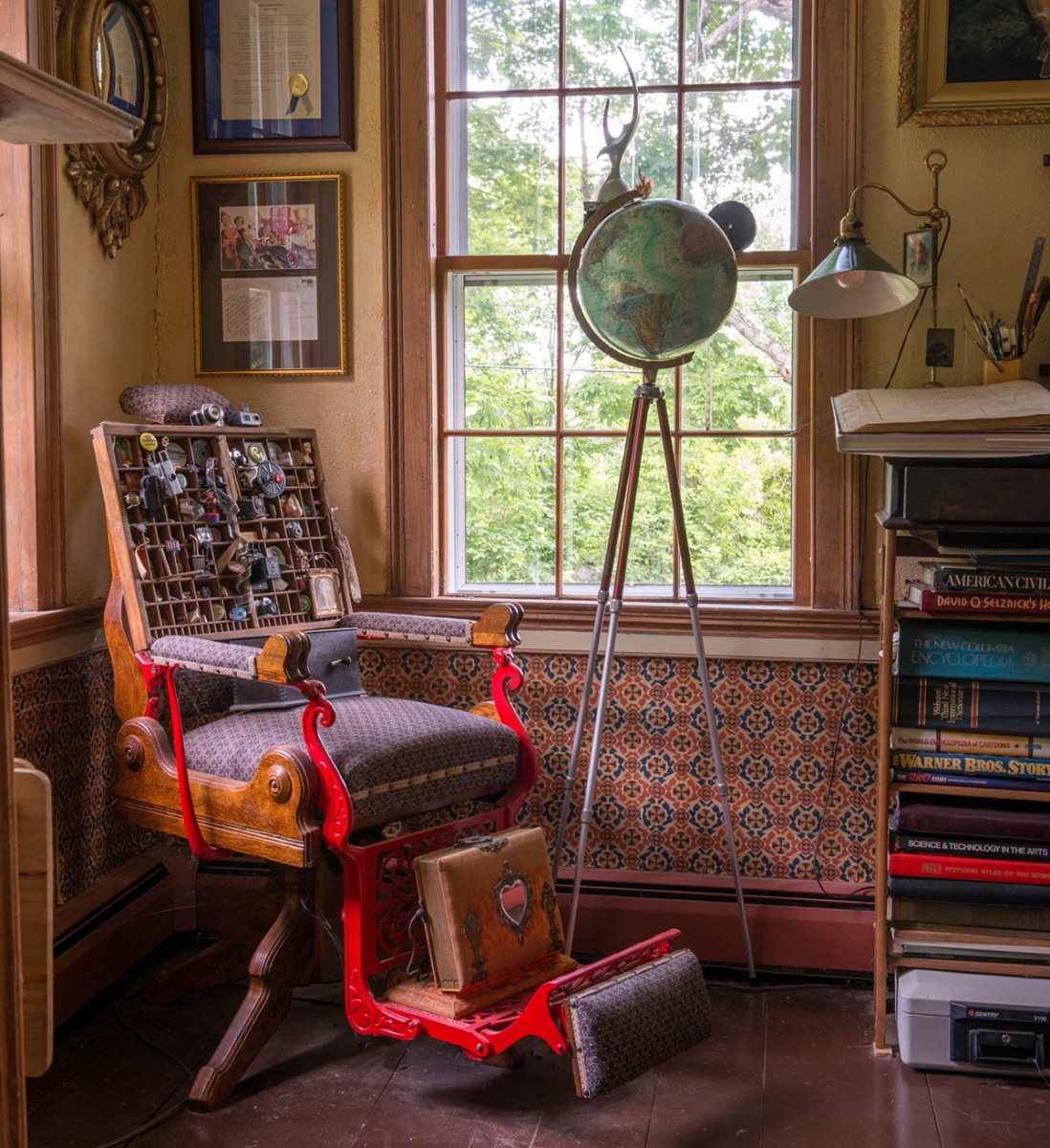 Fritz Wetherbee’s grandfather, Fred Minot Wetherbee II, was a dentist, and this was his dental chair. “I had it reupholstered and painted firehouse red,” Fritz says. The type box on the chair holds buttons, knickknacks and other items (a spoon, clothespin and pottery shards) found in the walls of the house.
Categories: Notable Homes & Homeowners