A Place for Fun and Games 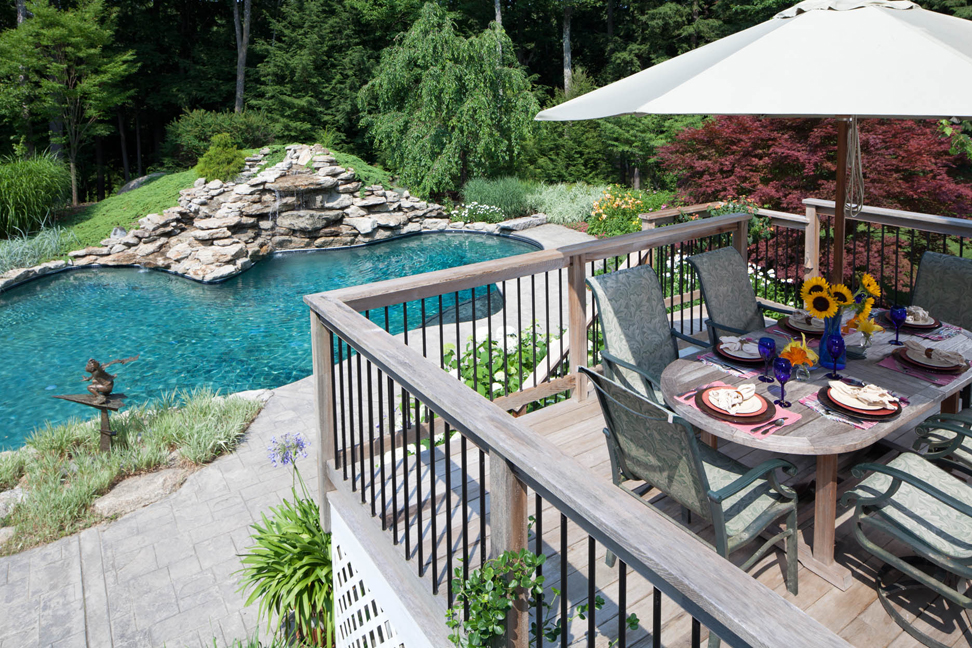 From the front, Bob and Ann Wilkins's Peterborough home is an attractive but unassuming Cape. Walk inside, and it quickly becomes clear there's more than first appears.

The front hall opens to spacious rooms, including a living room, dining area and family room. French doors lead from the family room to a backyard two-level deck, which has the effect of further expanding the space to the outdoors. The deck overlooks a large, organically shaped pool with a waterfall, as well as a cabana, yard, woods and beautiful plantings. Head downstairs and there is another surprise: a walkout-basement entertainment area with a game room, media room, exercise room, bar and lounge, and office.

It looks like a great house for parties, and it is. "We do a lot of entertaining," Ann says, adding that the size and space are perfect. "We can absorb a lot of people here."

When Bob moved in about twelve years ago, the 6,200-square-foot house was only a year and half old, and everything was in great shape. The paint on the walls and even the wallpaper in the dining room coincided with Bob's taste-and also with Ann's (she and Bob married a few years after he moved in).

But that didn't mean there wasn't room to add their own touches. The area downstairs where the game area would go was completely unfinished-nary a pool table to be seen. The back yard was a simple grassy area surrounded by trees. "It was a complete blank slate," Bob says.

As an entrepreneur and game developer who began inventing games as a teenager, Bob saw entertainment potential in all that empty space. Growing up in Seattle with numerous relatives nearby, "There was a pool table in every house, and always a game on TV," he says. That was the kind of atmosphere he wanted for his home.

To create this entertainment space, Bob called in John Stanek, the house's original builder. Stanek was a good choice not only because he knew the house and its construction, but also because his firm specializes in custom woodwork. Bob was envisioning lots of wood paneling and detailed trim for the game space.

After sorting through various samples, the two men finally decided on cherry paneling with dark walnut trim, which imparts a rich, warm feel to the basement. In addition to the paneling, the woodwork includes recessed ceilings and indoor, space-dividing windows with eight-over-eight panes.

The basement now features a media room that is open to, yet separated from, the main area by a wall of paned windows. From the comfort of leather couches, guests can watch the home theater system. There is also an exercise room, a bar and lounge area with a wine cellar for 1,100 bottles, and the main game area. Games include a pool table, a foosball table, three pinball machines, a tabletop shuffleboard game and various arcade games. Flat-screen TVs are strategically placed so guests can keep an eye on the game, whatever they are up to. The only "unplugged" area is the bar and lounge area. (Ann thought it would be nice to have one space that is media-free.) And for those times when work has be done, the downstairs area also has a spacious office with outside views.

Creating the ultimate game room turned out to be nearly as fun using it. "I had a blast," says Stanek. The wine cellar he designed for the Wilkinses was his first and required his learning how to create the necessary temperatures, dimensions, etc. He has since designed wine cellars for other clients.

Pool, pond and beyond

The biggest change Bob made to the previously unadorned back yard was the addition of a freeform pool with a waterfall that tumbles down an arrangement of rocks. Custom Pools of Portsmouth designed and installed the pool, and Stanek's son, an engineering graduate, built the waterfall.

With the help of Lang's Landscaping Services in Greenland, Bob also opened up the tree-lined yard behind the house, adding plantings such as ornamental grasses, dogwoods and maples. In warm weather, hanging bougainvillea, lilies and black-eyed Susans add color to the grounds.

There is also a pond on the seventeen-acre property, from which the Wilkinses can occasionally hear frisky beavers slapping their tails on the water's surface. And there's more: past the pool is a nine-hole putting green and a fairway, so the Wilkinses and their guests can keep their swings in shape.

The poolside cabana, which Stanek also built, is Ann's favorite "room" in the house. Inside, there is pine paneling, a sitting area with a fireplace and a flat-screen TV, a half-kitchen, a bathroom, a changing area and an outdoor shower. The structure started as a three-season room but now has baseboard heating-Ann and Bob found they enjoyed spending time there year-round but it got too cold in the winter. In the future, Ann says, they'd like to expand the cabana by adding bedrooms and making it into a guesthouse.

Although the vast majority of the work done after Bob moved in happened outside and in the basement, he and Ann
decided to add a few personal touches to the upstairs living space as well.

Ann liked the wall colors that were already there, but designer Lisa Teague helped create faux finishes to add texture and luster. The colors are warm-a creamy bisque in the family room, a subdued coral in the living room. These colors harmonize with the Oriental rugs throughout the house.

The Wilkinses enjoy collecting art, especially from Monadnock-area artists, and have two paintings by James Aponovich and one by Daniel Thibeault.

One other change involved the original large, square deck off the back of the house. Now a narrow, two-level deck, the lower level holds an outdoor dining area. Ann likes the trumpet vines that climb the deck supports.

Master of the games

The end result is a house that is comfortable and sophisticated, but not fussy. In keeping with Bob's original vision, the house is the ideal game spot. (Ann notes that while she enjoys entertaining as much as Bob, she is happy to handle the cooking while Bob takes charge of the games.)

Super Bowl parties are just one example. In wintertime, Bob also hosts what he calls "The Lazy Man's Olympics," with teams of guests vying for supremacy in games ranging from pinball to shuffleboard to pool. It should be noted that in addition to "big" games, such as pool, golf and pinball, the house is also full of board games-some invented by Bob himself. You'd have to work very hard to find yourself bored here.