Starting with a blank slate, Hanover home-owners created a spectacular garden that now includes an array of ornamentals and vegetables. 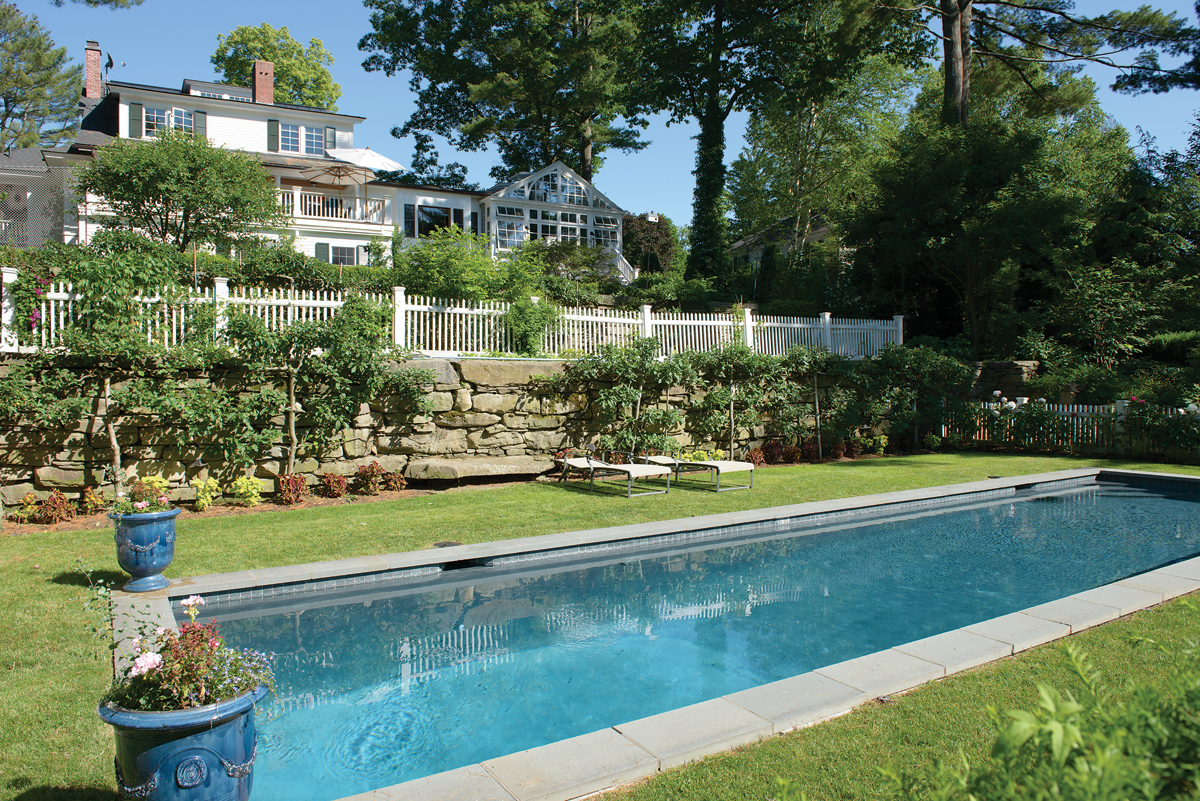 Richard Drubel’s wife Bayle designed the area around the lap pool where colorful coleus grow underneath the espaliered fruit trees along the stone retaining wall; annuals fill the two urns beside the pool.

Richard Drubel got hooked on gardening years ago when he and his wife, Bayle, bought their first house in Houston, Texas. “I planted a red hibiscus, and it was such a rewarding experience, making something that exotic bloom,” Richard says. “I am a terrible artist; I can’t create beauty in any other way, but I can sometimes grow beautiful plants.”

Although he took great pleasure in raising the tender plants and tropicals common to his zone 9 location in Houston, he missed the seasonality that New England gardeners enjoy. “I was yearning to garden in a place that had proper seasons. I read a lot of gardening books over the years and wanted to be able to grow what I had read about,” he says. So when he and Bayle moved to New Hampshire, he was eager to begin a new gardening adventure.

The house they purchased, located on a hillside overlooking a pond in Hanover, didn’t have any landscaping whatsoever. “The back yard had not been touched in thirty years; it was full of weeds and brush, and was so steep that it was really unusable,” Richard says.

At that time, one of his favorite gardening books was A Year at North Hill written by landscape designers Joe Eck and Wayne Winterrowd. “I knew immediately that I wanted Joe and Wayne to help me design and build the garden,” Richard says. Partners at North Hill Garden Design in Readsboro, Vermont, Eck and Winterrowd spent almost three years at the Drubel property, terracing the steep slope into four levels, adding retaining stone walls, and creating garden rooms that include a vegetable garden, a lap pool area, woodland gardens, a cutting garden and a relaxing grassy sward next to the pond. Eck and Winterrowd also built stone stairs and designed pathways through the garden that lead to interesting overlooks and link areas together. “It was a long process,” Eck says, “because there was nothing there to start with. It needed a lot of architectural work before we could even begin to think about plants.”

With the framework of the new garden in place and some initial planting done, Richard was able to indulge his passion for plants. At the entrance to the garden are many showy pink lady’s slippers (Cypripedium reginae). He has amassed collections of peonies of all kinds: many varieties of hybrid herbaceous peonies, Japanese tree types, and Chinese and Japanese woodland species. “The woodlanders have delicate single blossoms,” Richard says, “and they are very hardy, some even self-seed in my garden.”

He grows rare Asiatics like Glaucidium palmatum, which is native to northern Japan and related to the peony, as well as Paris polyphylla, an East Asian woodland plant related to our trilliums. Richard has a collection of arisaemas, commonly called cobra lilies, which form showy, jack-in-the-pulpit-like blooms. He grows those that are too tender for his zone 4 garden in pots, and he brings them inside over the winter. Fortunately for Richard, when Bayle remodeled their home, she added a glass conservatory, and the arisaemas are one variety to take advantage of this space. Richard provides them with a dormant period underneath the conservatory in an area he calls his “plant garage.”

“I was sad about losing the plants I loved in Houston, like plumaria and ginger,” Richard says, “and I couldn’t stand the thought of not being able to garden during the winter months. Now the conservatory is my favorite room in the house.” He says he has come to appreciate the low-maintenance tropicals that thrive in the conservatory or under lights.

Snowdrops are another of Richard’s favorites, and he has a collection of them in his white garden. “I love seeing the shoots of the first bulbs coming up in the spring,” he says. “I have some choice snowdrops that I grow above a retaining wall so they are at eye level, and every day, I can easily keep track of the progress they have made.”

Edible plants—such as strawberries, raspberries, apples and blueberries—are located throughout the garden. There is a handsome fenced-in vegetable garden that supplies fresh produce all summer. “Bayle and I like the idea of a working garden,” Richard says. “The asparagus is so great, we eat it until it comes out our ears! Last year, we grew corn for the first time and it was delicious. We were able to freeze a bunch of it.” This year, the couple plans to experiment with Asian vegetables.

On one of the upper terraces, there are twelve stone troughs planted with alpine flowers. Eck found the eighteenth-century troughs, which came from the Yangtze River Valley in China, at a nursery in Connecticut and called the Drubels right away, knowing the sculptures would be perfect in the Hanover garden. Richard calls them the best purchase he has ever made. “It allowed me to explore alpines, which are the perfect obsessive-compulsive plants. You have to trim them with cuticle scissors!” he laughs.

Each trough is planted with a different category of alpine or color theme—yellows, grays, gentians—making each a coherent little garden. Although delicate looking, alpines are tough plants used to growing in the harsh conditions found on mountaintops above the tree line.

Chris Esten of The Green Reaper and Sonia Swierczynski of Monte Verde
Gardening helped with the original plantings and maintain the gardens weekly. “In the beginning, it was all clay,” Esten says. “We had to do a lot of serious digging and a tremendous amount of soil amending.”

She found Eck and Winterrowd fun to work with. “They brought in lots
of plants and made on-the-spot decisions about where they all should go,” Esten says.

For Swierczynski, the structure of the garden is its strong point. “Early spring is magical! There are rivers of bulbs going down the hillside, but you can still see the bones of the garden. Later in the season, there is so much to look at that you don’t notice the structure as much,” she says.

Esten says she also finds spring in the garden to be compelling, especially when the hellebores and delicate anemonella are in bloom, but she considers the garden beautiful in all seasons. “In August and September, the perennial border is lush with grasses, eupatorium and thalictrum,” Esten says. “The big plants give the garden a nice scale.”

She brings her camera to work and photographs the garden weekly. “We usually take a walk around before we dig in, to see what’s changed that week,” she explains.

Such a big garden with a wide variety of plants, all with different needs, requires a lot of specific work. This is not a low-maintenance landscape, and over the years, the garden has evolved and changed. “It is Darwinian!” Swierczynski says. “We like to think creatively and keep trying new things; it is important to be flexible. Richard decides what to plant, and he is always experimenting with different things. We call this our little laboratory. It is very educational.”

Esten enjoys the opportunity to try growing plants she’s never seen before. “It is a great environment for learning about new plants,” she says.

First and foremost a plantsman, Richard says if there is an unusual plant out there, he’ll want to try it. He often tends to push the hardiness boundaries and uses tricks, such as planting near heat-retaining stone walls to make use of warmer micro-climates within the garden. “I am always making changes. I’m very fortunate to have such skilled gardeners as Sonia and Chris to help with that,” he says.

Although Winterrowd passed away in 2010, Eck and Drubel have remained close friends, often comparing notes on their favorite plants. “Richard’s garden is a marvel, truly beautiful,” Eck says, “and it came about by the conjunction of many inspired people.”