One company’s state-of-the-art technology has streamlined the homebuilding process by conserving and recycling resources, and offers many design options to boot. 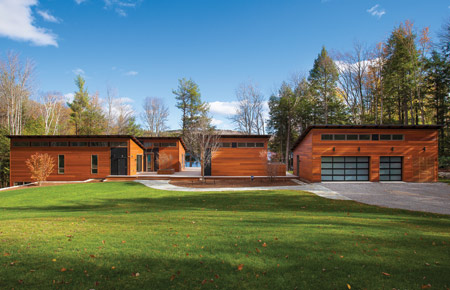 Blu Homes’ “Glidehouse” model of precision-built homes offers style, eco-friendly features and lots of design options for the homeowners. The home site in Nelson includes the main home (left), a two-room pod (center) and a garage (right). The pod and garage were built separately to match the main house.

Manufactured homes have come a long way. The typical “pre-fab” may conjure up images of a pre-built home traveling on an escorted flatbed down the highway en route to its final destination. But in the case of the Chesney family’s vacation home in Nelson, “pre-fab” means “pretty fabulous.”

Chris Chesney and his wife, Sarah Cornog, could have chosen to build their dream vacation home near a pristine New Hampshire lake on-site, from the ground up, but there were several reasons they chose a modular, precision-built home from Blu Homes for the main house.

“We chose the Glidehouse because of how it blurs the line between the indoors and outdoors,” Chesney says. “We wanted the home to be our way of getting back to the lake and nature.” The Glidehouse features large windows with views to Lake Nubanusit, and each bedroom has a door to the outside.

“We’re not just looking outside at the lake,” Chesney says. “We can run down and jump in the water.”

Chesney and Cornog made some modifications to the Glidehouse model, such as including a lower, walkout-basement level, and now the home offers 2,600 square feet of living space. The main house features three bedrooms, three bathrooms, a kitchen and dining area, a living room and a downstairs family room with enough play space for the couple’s two young children. Add to that a separate multiuse two-room pod that serves as a quiet writing space for Cornog, and a separate two-car garage with an office space that matches the design and materials of the Glidehouse. In all, the property offers approximately 5,000 square feet of usable living space, a luxury for Chesney and Cornog, who at one time lived in a 370-square-foot New York City apartment.

Set on a five-acre lot that abuts many acres of conversation land managed by the Harris Center, the project required careful planning and a variety of permits. The couple chose Bruce Armer of Armer Construction Consulting in Dublin to serve as general contractor, architect Dan Bartlett, AIA, of DB Architects of Keene for his expertise and Pellettieri Associates, Inc. of Warner as the landscape architect.

“The house is very relaxing,” Chesney says. “Most rooms have a sweeping view of the lake. In the summer, you hear the call of the loons all day. A nesting pair of bald eagles lives near the water. It’s very tranquil.”

In August, the family watched meteor showers, and, usually, on a clear night, the Milky Way is visible.

With so many windows and a southeast orientation, Chesney says the home is a “morning house.” The family rises early with the sun, and rests after sundown. The home includes an exterior shower and a Japanese-cedar hot tub from Maine Cedar Tubs. “When it gets cold and rainy, the hot tub gives us a way to spend time outdoors,” Chesney says. Outdoors, a high-density wood called ironwood from Brazil was chosen for the spacious deck.

Indoors, high-efficiency features include radiant heat throughout and a Rais-brand Danish woodstove. The flooring is certified recovered white oak that Blu Homes offers as one of many options. The home features modern, high-tech amenities, such as a remote monitoring system and a backup generator to keep the heating system going if the power goes out.

“A nice feature we put in was a variety of automated controls. I can monitor the house from New York, turn the temperature up if we’re en route, and make sure everything is going smoothly,” Chesney says. “It’s a good way to keep tabs on the house. I even get e-mails from the generator.”

Dave Armer from Armer Construction Consulting was the onsite manager for this project. While the home was being assembled in Massachusetts (Blu Homes has since built a new plant in Vallejo, California), crews prepared the lakefront setting, built the foundation, installed the environmentally friendly septic system and drilled the well. Once the home arrived on-site, it literally unfolded, with hinged end walls.

Bartlett served as the consulting architect after the homeowners realized the building site was conducive to having a walkout basement and a more elaborate lower level than provided in the original Glidehouse design. The work called for structural engineering. “I helped coordinate a foundation plan and worked with the homeowners to create a floor plan and set up the basement that didn’t feel like a basement,” Bartlett says.

Bartlett also designed the garage to be compatible with the Glidehouse details. “It goes with the house perfectly,” he says. Chesney and Cornog wanted garage doors on both sides, so that the doors rise up to create a covered pavilion.

Blu Homes was founded in Waltham, Massachusetts, in 2008. The company’s  East Coast plant, which was located in East Longmeadow, Massachusetts, was closed in January 2012 after the opening of a new factory at the former Mare Island Naval Shipyard in Vallejo, California, in December 2011. The company serves customers nationwide and is still headquartered in Waltham, with offices in San Francisco and Ann Arbor, Michigan.

Dana Smith, communications director for Blu Homes, says the homes are built completely in the factory. The homes are constructed with high-gauge steel frames with steel hinges that allow the structure to fold into itself and fit on a standard-sized flatbed truck. She says some other manufactured home builders require special transportation arrangements for wide loads across highways.

“Ours is a simplified process. We can ship them where they need to go,” says Smith, adding that the company just began shipping homes to Hawaii.

Blu Homes currently offers eight home designs starting from a basic model called “Origin” for $130,000 up to the “Sidebreeze” model for $590,000. All models can be customized using either the homeowners’ team or through Blu Homes’ design consultation. Homes include all appliances and fixtures. Smith says pre-building the home at the factory saves time, money and manpower. Any trimmed or cut materials are reused or recycled. Crews save time and gas by not having to commute to construction sites, and the turnaround time from order to delivery can be less than a year.

“Everything about our homes is green,” Smith says.

The Glidehouse, with its clean, contemporary lines, differs from many Adirondack-style, lakefront homes in New Hampshire, yet fits in nicely.

“The home is a nice fit for the lakefront setting,” Bartlett says.

Overall, Bartlett described the project as a successful collaborative effort, and praised Chesney for his insights and understanding of every detail. “Chris Chesney is one of the most wonderful people I’ve ever met in my life,” Bartlett says. “He was fabulous at negotiating this journey.”