A Primer on Cut Flowers

Keep these things in mind when you buy your next bouquet.

January can be long and dreary—a letdown after the excitement of the holidays. Time for a little floral therapy to fend off the winter blues!

A bouquet of flowers is sure to spread joy on the bleakest day, but what kinds of flowers are available at this time of year? Florist Alli Coy, of Allioops! Flowers & Gifts in New London, says snapdragons, roses, tulips, and scented greens such as eucalyptus and cedar are big sellers in winter when people’s senses are starved. “We always like to use insanely bright and bold color choices that make things pop,” Coy says. “Right now, everything looks even brighter since there is so little color happening outside. Gerbera are very popular. Everyone wants those colors.”

At Chalifour’s Flowers in Manchester, manager Judy Pyszka sees a similar trend. “In January, people want color,” she says. “They have had enough of the seasonal red and green, now they want bright colorful mixes.” Pyszka finds lilies, delphinium, lisianthus and gerbera are popular in winter bouquets.

The bouquet back story

In the dead of winter, where are local florists getting these gorgeous flowers? Gone are the days when roses were grown in coal-heated, glass greenhouses right here in New Hampshire. The cut-flower industry has gone global, giving us access to flowers from around the world. Americans spend more than $7.5 billion on cut flowers annually, and 80 percent of those flowers are imported from other countries, according to the U.S. Bureau of Economic Analysis. 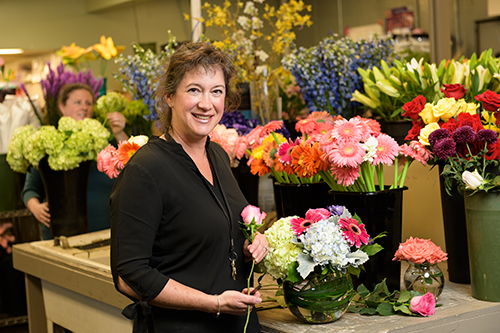 Judy Pyszka, manager at Chalifour’s Flowers in Manchester, and floral designer Michelle Raymond (in the background) spend every day surrounded by beautiful flowers.

State-of-the-art greenhouses make it possible to grow out-of-season flowers, such as tulips or gerbera in Canada or Holland. Equatorial farms in South America and Africa get twelve hours of sun a day, 365 days a year. Farms situated at high elevations in Ecuador, Bolivia and Kenya have moderate temperatures along with full sunshine, giving them the perfect conditions for growing incredible roses and other flowers. Although there are small airport terminals receiving ornamental flowers in Boston, New York, Los Angeles and Chicago, 90 percent of the imported flowers are flown into Miami daily, according to the Association of Floral Importers of Florida; the flowers are then sold to various wholesalers, who truck them up the East Coast to be distributed to florists and supermarkets.

There is a downside. It only takes one storm to cut off the flow of flowers. Last September, Hurricane Irma shut down the Miami airport and disrupted the supply of flowers for more than a week. The old Boston Flower Exchange that used to serve the Northeast was shut down in December 2016 to make room for medical offices. Ten of its wholesalers have opened a new market in Chelsea called the New England Flower Exchange, but most of its flowers come from Miami. 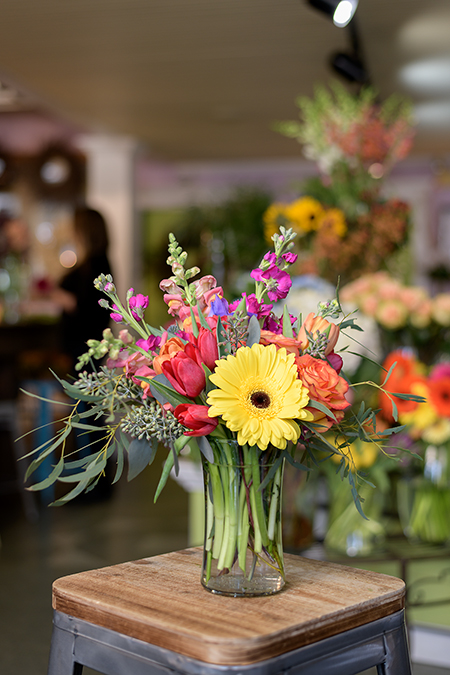 According to the National Retail Federation, Americans will spend about $2 billion on flowers this Valentine’s Day. Half of those flowers will be roses, and the most wanted color is red. “Roses are traditional for Valentine’s Day,” Pyszka says. “We carry a few different types of roses at different price points to give some more affordable options.”

At Valentine’s Day, expect to pay more for roses than at any other time of the year. It is a simple case of supply and demand. The florists are paying a lot more for those long-stemmed reds! “Don’t get roses,” Coy suggests. “They are wonderful and symbolic, but cost three times as much. Even the filler flower prices are double.”

There are some reasonably priced alternatives. “We do huge mixes of fun, different things. Gerbera, lilies, spray roses, delphiniums, gladiolas and callas are popular,” Coy says. “Alstroemeria is a beautiful flower that can last three weeks in a vase. Carnations get a bad rap, but they are a lovely, long-lasting flower and a good value.”

Pyszka finds that some people are breaking away from the trend of roses for Valentine’s Day. “They want mixed bouquets, so we plan specials of mixed colors,” she says. “We also showcase selections in red, pink or lavender—traditional Valentine’s Day colors.”

What about those grocery-store bouquets? “Any time you get flowers into someone’s home it is a good thing,” Pyszka says. “It gets them into the habit of having flowers in the house, and eventually, they will realize that they get a higher-quality product at the florist shop.”

Coy agrees: “The grocery-store flowers are fine for the price, but they will not last as long.”

That’s because supermarket flowers are not processed the way a trained florist would. Florists have the best tools for the job, and can keep the flowers at the proper humidity and cold temperature. In the grocery store, the flowers are likely to be displayed in the produce section where they are exposed to ethylene gas given off by ripening fruit. This gas is the enemy of cut flowers, causing them to age rapidly.

Tips from the experts

Pyszka advises looking for roses that are still firm and not blown open. To protect the roses from bruising, florists leave the outer guard petals on the buds. When the flowers are sold, florists remove the guard petals to reveal the beauty within.

Coy advises gently squeezing the rosebuds to see if they are firm, and to beware of murky water or anything that smells funky or moldy. Both florists recommend re-cutting the stems and changing the water frequently. Pyszka uses a floral preservative in the water, while Coy says she is getting away from using a preservative because it is an unnatural product. Coy advises changing the water every other day. “Your flowers will last much longer if they are kept in clean water,” she says.

Allioops! Flowers & Gifts was opened in 2009 when Coy purchased the New London business from an existing florist. “We switched everything about it,” she says, including moving to a new location. Allioops! Flowers & Gifts has two full-time designers and two part-time employees. The designers work in the open at a big farmer’s table so customers can see their arrangements being constructed and offer suggestions. “We love people’s ideas,” she says. 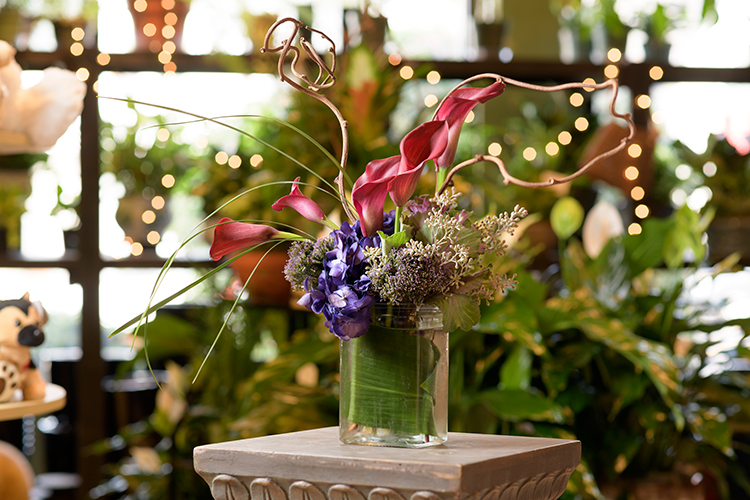 If you’re concerned about the exploitation of workers and the environmental impacts in the third-world countries where many of these flowers are grown, you can look for flowers that have been certified ecofriendly and sustainably grown.

Judy Pyszka, manager of Chalifour’s Flowers in Manchester, has found that conditions have improved from the early days of South American flower farming when there was widespread abuse of workers and the environment. “All that has changed,” she says. “The big farms follow strict guidelines now.” 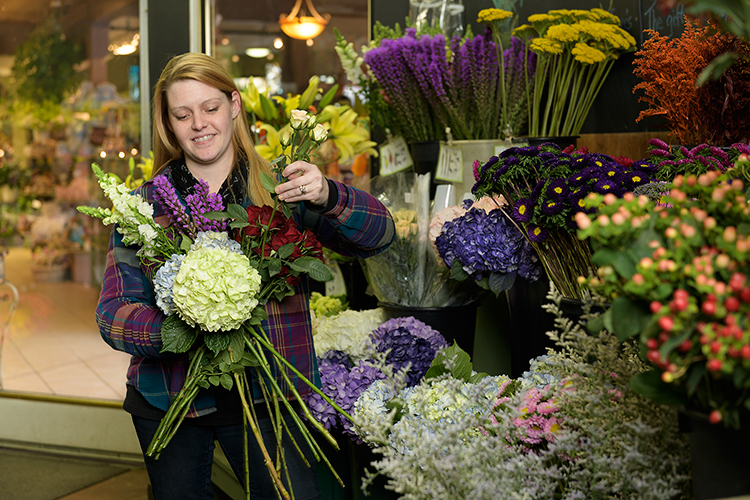 Floral designer Jamie Burton weaves together a mixed bouquet that includes long-stemmed roses and hydrangeas from the large inventory of flowers at Chalifour’s Flowers.

Farms offer employment security, maternity benefits and overtime pay. Child labor is prohibited. Use of pesticides is restricted, composting is encouraged, and water supplies are conserved and protected. Food co-ops, daycares, schools and medical facilities have been funded by many of the larger farms.

Certification is a positive marketing tool for these farms, and there are several groups that certify imports. Look for labels from Rainforest Alliance, Florverde or Veriflora. For products grown in the United States, Bloom Check and Protected Harvest oversee the adherence to California Standards for Sustainable Flower Farming. All these groups are concerned with sustainability, making sure that energy use is reduced, water is recycled, biological controls are employed and, most important, workers are treated fairly.

Florist Alli Coy, of Allioops! Flowers and Gifts in New London, prefers to use organically grown, local flowers in season, but when she needs imported products, one of the whole-salers she deals with—Green Mountain Florist Supply of Middlesex, Vermont—buys almost exclusively from certified farms. Green Mountain Florist Supply sells to many florists in the Upper Valley area.

For those who pick up a bouquet at the grocery store, it is not that hard to find sustainably grown flowers. Trader Joe’s, Whole Foods, Sam’s Club and Costco are committed to dealing only with socially responsible growers. Even Shaw’s Supermarkets has Rainforest Alliance–certified roses.