National food editor J.M. Hirsch created a kitchen for both his family and work.

To season the meat for Flank Steak with Chimichurri,  J.M. Hirsch grinds pepper and snags a pinch of salt. Behind him, an enviable assortment of knives on a long magnetic strip is at the ready.

Let’s tour Superman’s kitchen. It looks like a regular kitchen. But, here in this lovely house in Concord, J.M. Hirsch, national food editor for the Associated Press (AP), has created a double-duty kitchen on steroids.

Hip and streamlined, this room is at the center of a home designed for a busy family. Hirsch’s wife, Holly Ramer, an AP reporter, is now in full swing with New Hampshire’s presidential primary. Their eleven-year-old son, Parker, juggles the usual crazy balance of middle-school activities and pals. Add to this a merry crowd of family and friends.

But this kitchen also works.

Each week, Hirsch’s staff of two chefs, a photographer and an assistant turns out a feast of recipes with photos and stories that go out to hundreds of AP-member news outlets. No pressure there.

“I love the flexibility of having two ovens,” Hirsch says, glancing about his kitchen. “Especially as we get into the holidays, which for us begin in August. We cook and photograph five or six turkeys, and make between twenty and twenty-five different side dishes, at least. It’s like doing six Thanksgiving dinners in one kitchen. So, when we renovated this time, we had to have a dual oven.” 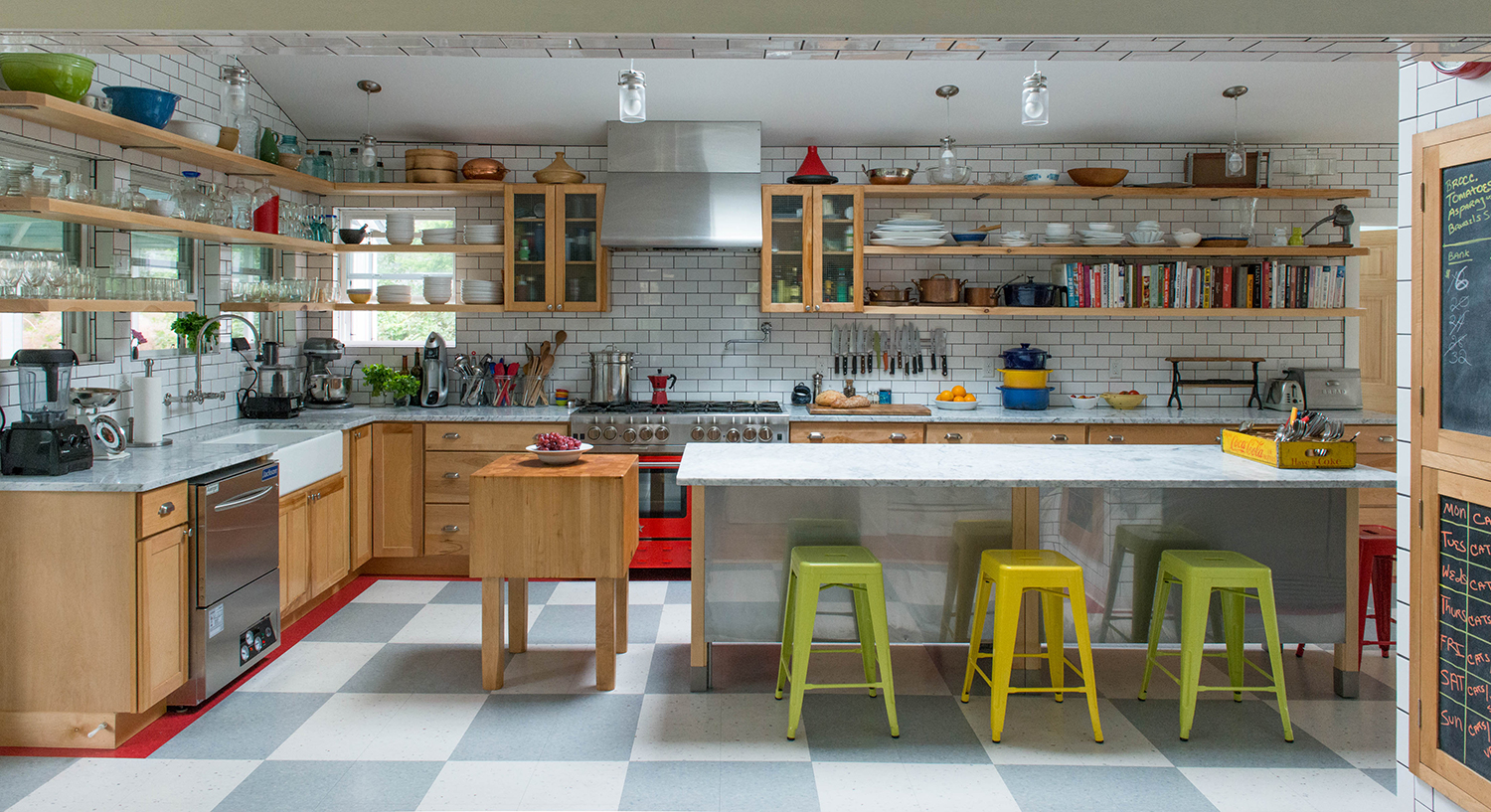 Level lines all around create a clean, streamlined look in J.M. Hirsch’s kitchen. Natural wood and pops of bright color keep this kitchen cozy and fun.

Hirsch’s BlueStar range is a deep red, and although it’s not obvious, the main convection oven is a standard commercial size.

And yes, the most recent renovation is the kitchen’s third. Hirsch and Ramer began renovating the moment they moved in some thirteen years ago. That first renovation enlarged the kitchen by merging it with a small dining room and pretty much replaced everything floor to ceiling. Then along came Parker. The rough plaster walls were replaced with smooth, easy-to-clean subway tile. The refrigerator, of necessity, became bigger, and then bigger. Then, it was time.

J.M. Hirsch offered up a bunch of delicious fall recipes and decorating ideas with New Hampshire Magazine.
Click here to view the feature.

This time walls came down. The bathroom that had jutted discordantly into the room was torn out and moved to make room for more counters. Now that Hirsch’s work included four staff members, more room was a necessity—but the kitchen still needed to be homey. Architect Heidi Pope of Pope Design Group in Goffstown sketched out ideas for Hirsch and Ramer using Revit by Autodesk. “When you can see how stepping down into the sun room will look from different angles,” Pope says, “it makes decisions a lot easier.”

Uneven floors were made level. The doorway to the current dining room was opened up and a structural beam added. But Pope readily acknowledges that when a contractor is actually renovating a house, there can be surprises that require adjustments to plans. 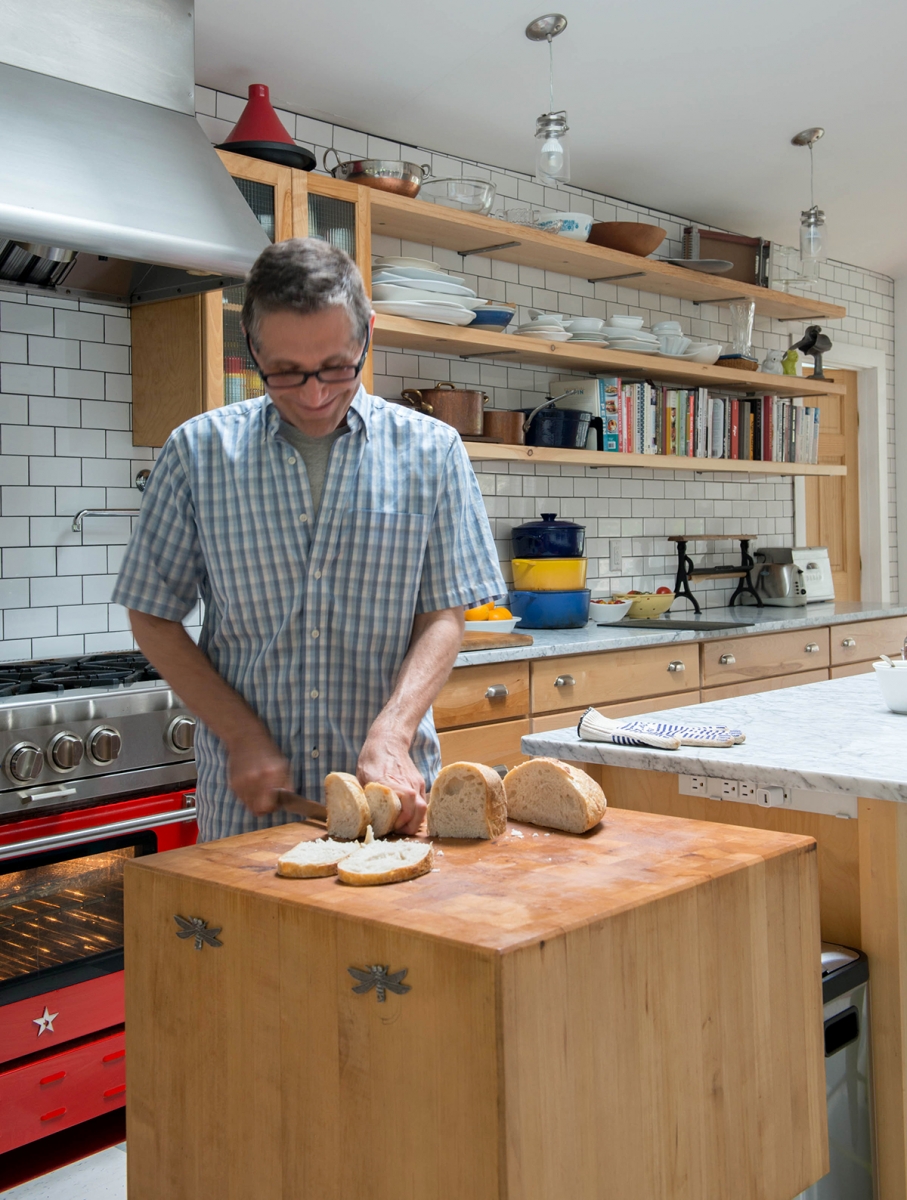 J.M. Hirsch slices bread on his prized butcher-block stand. Note the inconspicuous power strip at the end of the marble counter.

For contractor Rick Martin, of Sunset Builders in New Boston, that surprise came when tearing down the ceiling. “The beams up there were not structural,” Martin says, “which meant that with a bit of problem solving, we could vault the ceiling.”

This allowed for a skylight. “I asked for the biggest skylight we could get,” Hirsch says. ”I am obsessive when it comes to light for work. These lights we have, by the way, are just inexpensive one-hundred-watt LEDs.

“But, for AP, we only shoot with natural light, and we never doctor our food or our photos,” he continues. “The rules [for journalism] are the same whether it’s the president or a plate of spaghetti. We shoot it as is. And with all this natural light, we can photograph that way far more easily.”

Now, cool northern light bathes the kitchen, illuminating work surfaces, food and faces. Directly over a long marble counter, the skylight gives an unexpected Old World feel to the space. Plus, there aren’t many gadgets or appliances on display, with the exception of a magnetic knife holder loaded with many well-used knives. The open shelving has some cookbooks, white china and two colorful tajines (earthenware pots for desert cooking). In front of a window by the farmer’s sink, glassware on shelves is transparent and light.

Why does it all look so simple? Hirsch smiles, because he planned it that way.

Looking at the marble counter, it doesn’t shine the way highly polished granite counters do.

“It’s Carrara marble—a matte finish,” Hirsch says. “I know: marble etches, it stains, it chips. But if you go into Parisian cafés and kitchens, the counters are all old marble, and they look great.”

As for just one big sink, Hirsch says, “I dislike small or divided sinks. You can’t fit anything in them. This one can accommodate anything, including lots of large sheet pans.”

Turns out that the dishwasher, no surprise, is not your average dishwasher. This commercial model completes its wash cycle in just 90 seconds. With water at 194 degrees, within a minute, dishes are dry.

For Christmas one year, Hirsch gave himself a 1,200-pound butcher-block stand. That, plus the stove and the 900-pound stone counter made additional support a good idea. So Martin ran a support beam underneath the kitchen.

“Did you see the coffee station?” Hirsch asks. He explains how the small corner counter is the same height as the others to maintain that streamlined effect. He convinced the plumber to install a cold-water spigot and connect it directly to the coffee machine. All the mugs and makings for coffee are right at hand. “It was a great way to use up what otherwise was eighteen inches of dead space at the far end of the kitchen,” Hirsch says. “Now the coffee pot and all its gear have a totally practical place to live.”

Hirsch also added a convenient power strip at each end of the marble counter.

Hirsch used commercial-grade linoleum tile for flooring. “This is the same tough, inexpensive tile they use in Walmart,” Hirsch says. “The manufacturers don’t install it unless it’s for thirty thousand square feet. But we found someone to do it and went with the red border for fun.” 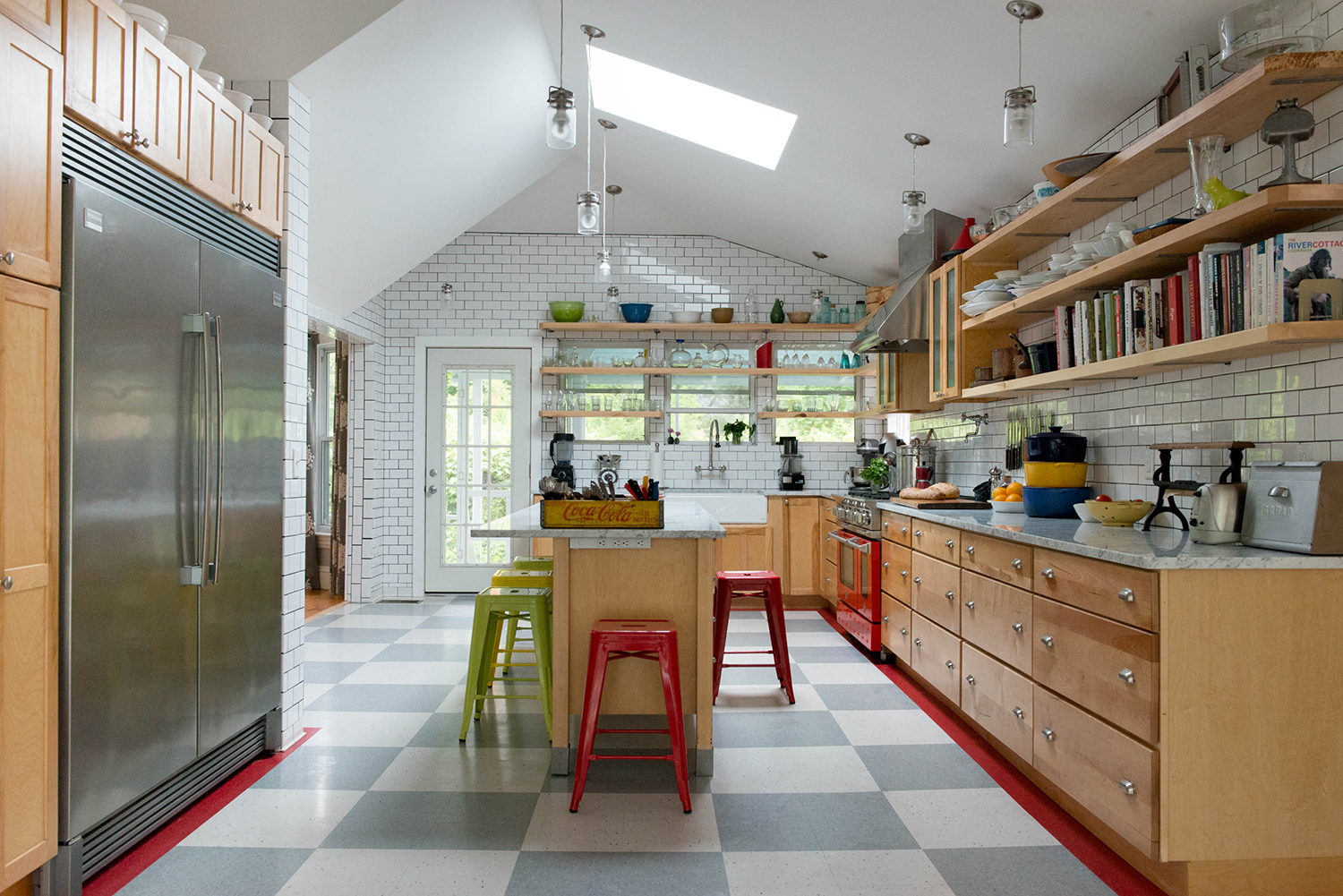 The vaulted ceiling and skylight create an inspiring, airy space for cooking and enjoying great food.

When Hirsch begins to cook, his focus shifts completely to the task at hand. A food processor appears. Big bunches of cilantro and parsley go in. He’s making chimichurri, an Argentinean steak sauce similar to pesto. “Well,” Hirsch muses, “normally, I use garlic, but we don’t seem to have any. How about shallots? That’s the challenge of having an army of chefs taking over your kitchen all the time. They do so much of the shopping and cooking, I’m kind of out of loop.”

Hirsch plops flank steak on a big sheet pan, slides it under the broiler and slices some bread. Soon the meat is done and sliced up. Hirsch assembles everything, then dollops chimichurri on top. This all seems to happen instantly. For years, Hirsch has written a column, “Cooking on Deadline,” and here it is, in action.

Parker emerges from the living room, aka, Lego heaven. It’s right next to his dad’s office. Now the domestic side of this kitchen really comes to the fore. Hirsch can’t help but smile, because Parker is great. The two of them are an irreverent but compelling team. Hirsch’s most recent book, Beating the Lunch Box Blues, tackled that parental challenge, and Parker, of course, was key. As part of that project, Hirsch and Parker were guests on Emeril’s and Martha Stewart’s television shows.

“It looks like a whirlpool in the middle,” Parker says.

“It’s coming together. … My goodness, it’s kind of thick. Another egg?”

Mixed in, Hirsch manages a few teaching moments for Parker, doing a bit of measurement math as well as explaining how a compass works and how to make one by magnetizing a needle. 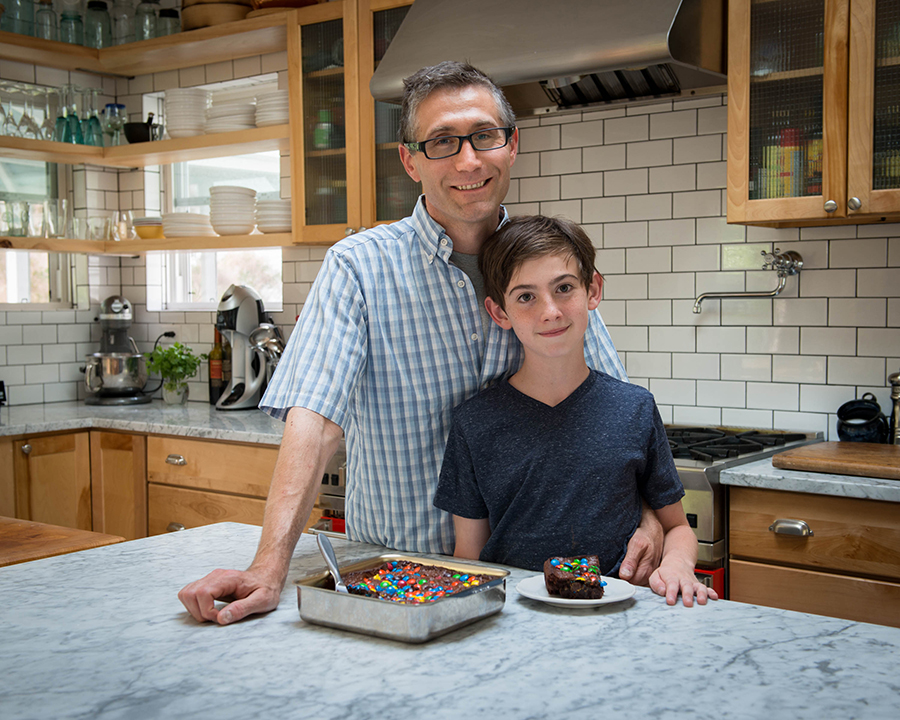 What Parker really wants to do is add the M&Ms.

“I am lucky to have two jobs really,” Hirsch says. “As the food news editor for AP, I have writers all over covering trends and news in the food world.” The other part of his job is the culinary side. Under his direction, his chefs develop and test hundreds of recipes a year. He also manages a stable of celebrity columnists, including public television’s Sara Moulton; Food Network’s Melissa d’Arabian and Aarti Sequeira; and grilling expert Elizabeth Karmel.

This fall, even politics will get a seat at the table. Hirsch and Ramer will interview and cook with presidential candidates visiting the state to campaign. “We’ll get to see a different side of these folks,” Hirsch says. “It will be an opportunity to raise some real and substantive issues around food policy. We’ll talk about organic food, genetically modified organisms (GMOs), farm subsidies, and food safety and inspection. And for fun, we’ll also get them to cook a favorite recipe.”

When asked if Ramer cooks, Hirsch shakes his head. Ramer likes to bake, but she rarely cooks. “There’s no need,” he says with a laugh. “I cook.” 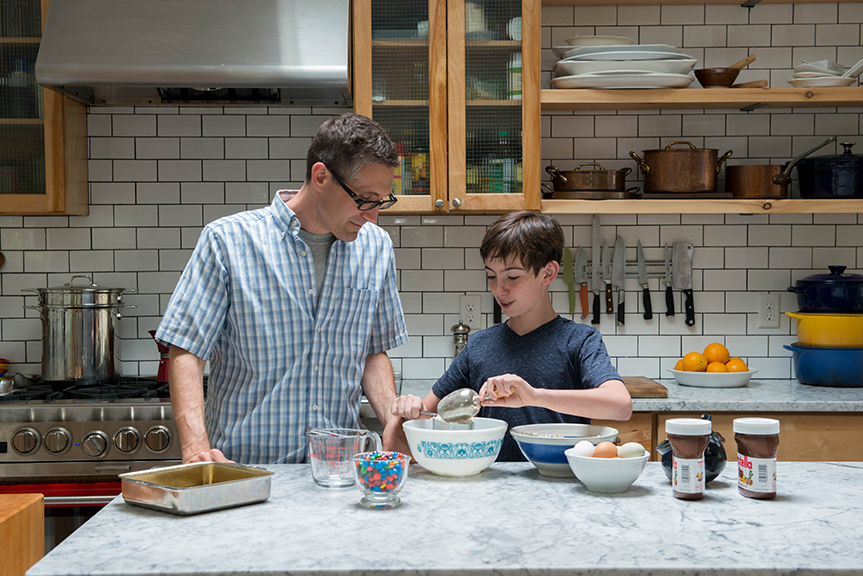 I couldn’t believe how silly, easy and insanely delicious this recipe was. Variations of it have been floating around the Internet for a while, but I didn’t believe them until Parker and I tried it. If you like rich, fudgy brownies that you won’t be able to stop eating, this is the recipe for you.

3. Bake for 45–60 minutes. After 45 minutes, test the brownies by inserting a toothpick at the center. If it comes out clean, the brownies are done. If not, return the pan to the oven and bake in 5-minute increments until done.

4. Cool in the pan, then cut into squares. 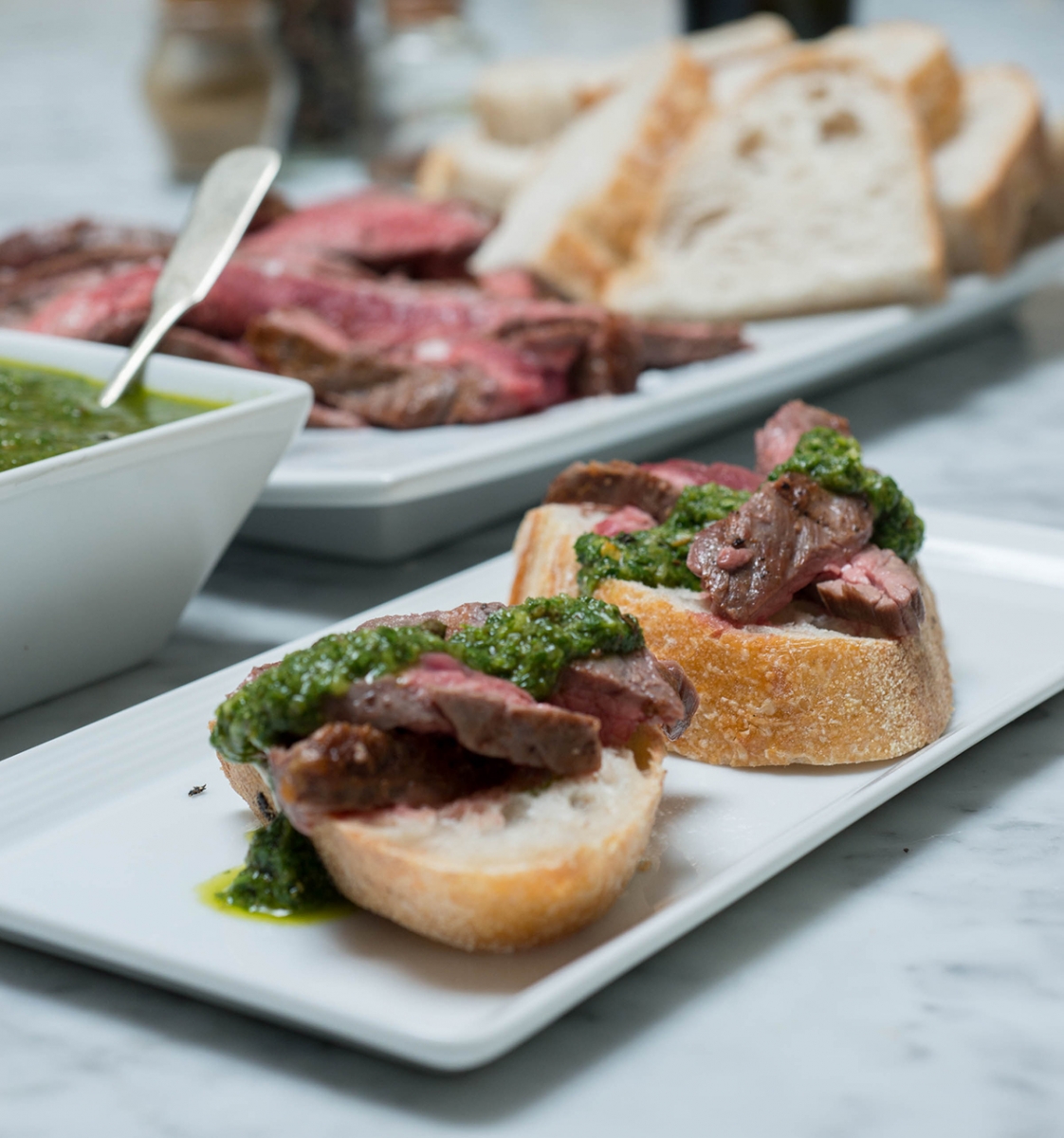 This is a great starter for a crowd, and it’s easy to prep ahead of time. The chimichurri can be made and refrigerated up to a day ahead. And feel free to marinate the steak for up to 24 hours.

1. In a large plastic zip-close bag, mix the soy sauce and a generous ½ teaspoon of pepper. Add the steak, seal the bag and turn to coat evenly. If cooking right away, let the meat rest at room temperature for 30 minutes before proceeding. Otherwise, refrigerate until ready to cook.

2. To make the chimichurri, combine the parsley, cilantro, olive oil, vinegar, oregano, cumin, salt, garlic and red pepper flakes in a food processor. Pulse until very finely chopped and well mixed, but not quite puréed. Set aside.

3. Heat the broiler, set a wire rack over a rimmed baking sheet and mist it with cooking spray. Remove the steak from the marinade and set on the rack. Broil about 6 inches from the heat for about 4 minutes per side for medium rare. Set aside to rest for 10 minutes.

4. Slice the steak thinly across the grain. Mound slices of steak onto each slice of baguette, then spoon the chimichurri over it.