A Renovation Made to Order

Transforming a not-so-extraordinary home in an extraordinary location was easy with help from the right architect and interior designer. 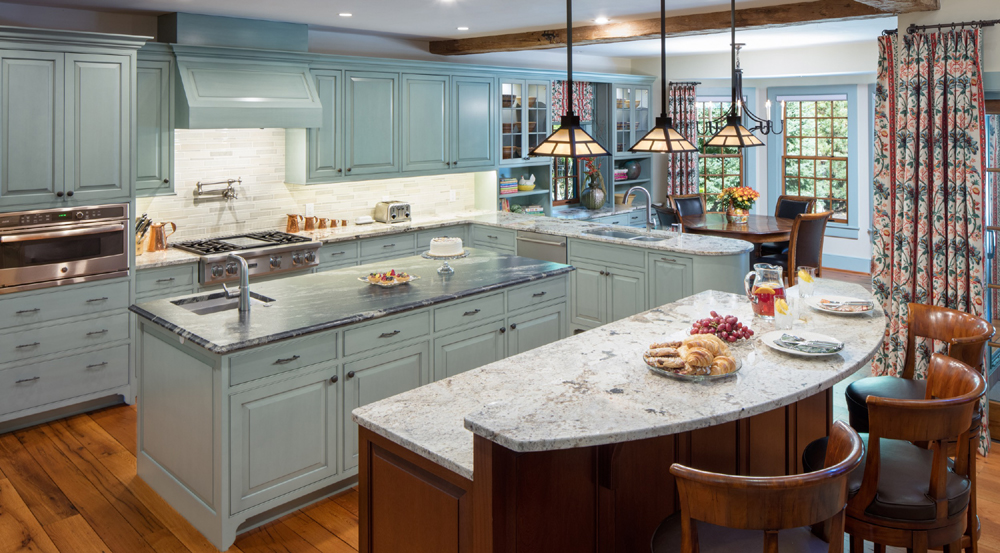 When Irene and Michael Appe decided to downsize, they wanted a comfortable home that was close to the ocean and their three adult children and that had a lot of land. In 2015, the Appes found the perfect spot: a ten-year-old home on seventy-five acres, located at the end of a long, twisting driveway, not far from the rocky New Hampshire shore. The Appes knew exactly who could take the five-bedroom home from ordinary to extraordinary: Bill Soupcoff of TMS Architects in Portsmouth and Michael Cebula of Cebula Design in Newburyport, Massachusetts.

“We met Bill and Michael (Cebula) when we were building our house on Lake Winnipesaukee,” Michael Appe says.

Michael Appe, a former Microsoft executive, and Irene also built a close working relationship with Soupcoff and Cebula, who brought fine design and attention to detail to the Appes’ seventeen thousand-squarefoot lakefront home. The new Seacoast home combines that attention to detail with warmth and intimacy, creating a space that’s perfect for entertaining friends and family.

The Appes’ seven thousand-square-foot home has many appealing amenities: a large, screened porch leads to a nicely landscaped swimming pool; trails weave through the heavily forested property (there’s even a small horse barn); the beach is less than a mile away. But, when Appes bought the house, it was dark and dated. “There was no sunlight bleeding from one room to another,” Soupcoff says. “Many of the rooms were divided off with four walls and a door.” 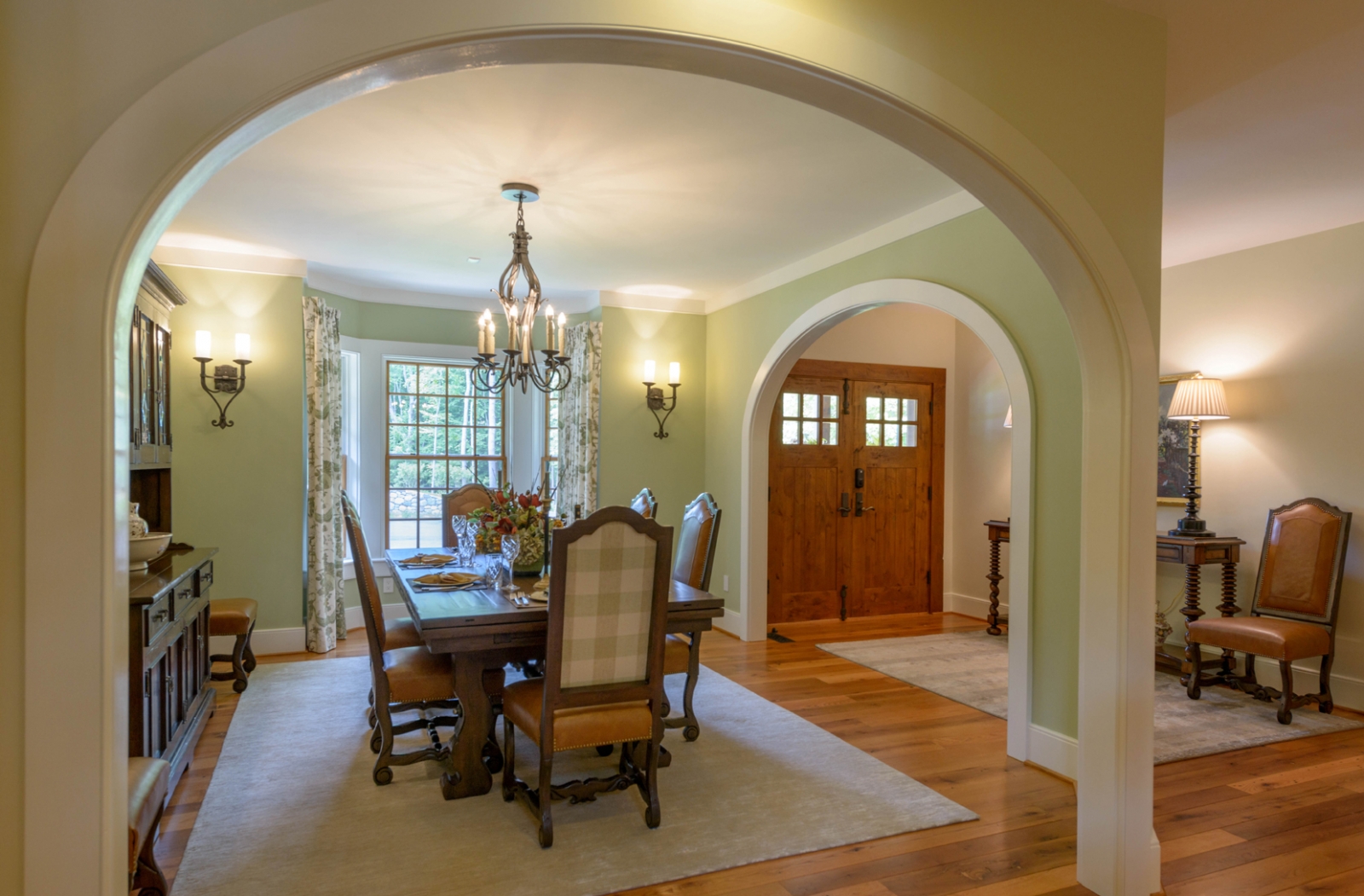 The dining room was opened up by removing two walls and adding arched openings to the kitchen and the front hallway. The traditional dining set, by Bausman, accommodates large family gatherings. The lighting is by Hammerton

Renovating the first-floor kitchen/ dining and living areas was Soupcoff’s primary focus. His challenge was making the large, boxy, living areas more intimate without altering the home’s basic shape. “We recommended taking out walls and opening up the downstairs rooms to brighten the entire first floor,” Soupcoff says. Construction, handled by Premier Builders of Georgetown, Massachusetts, started in December 2014. 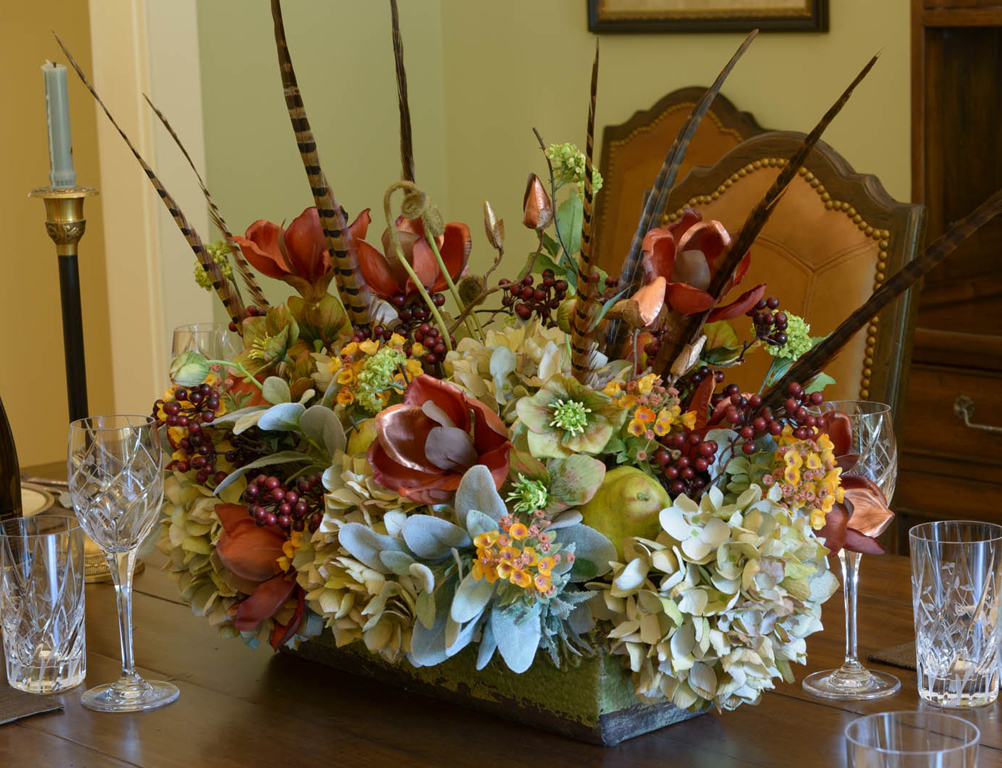 The floral arrangement is by Terrance Gleason of Greenery Designs in Amesbury, Massachusetts.

The color scheme was also important, especially to Irene, who wanted to bring light and color to the house. She worked closely with Cebula to select colors and furnishings that would transform the space while reflecting her personal taste. (“Picking out furniture and fabric is always the best part of a project,” she notes.)

The interiors, which Cebula now describes as “rustically elegant,” were then monochromatic and dark. A drapery fabric—Le Lac in tea, by Brunschwig & Fils—provided the perfect inspiration. Cebula integrated its soft blue greens in kitchen cabinetry and wall trim, as well as its mellow golds and red in furnishings. “The blue green is a pretty color that goes well with wood and doesn’t feel heavy,” he says. Irene’s daughter, Carly Baker, and Dave Wenners of C&D Painting in Newburyport, Massachusetts, painted the home interiors.

The kitchen, which originally opened directly onto the family room, is now a more defined space with the addition of an island separating the rooms. The polished granite-topped island serves two functions: food preparation and eating space. Bar stools on one side offer seating for informal meals; a second island in the center of the kitchen is topped with an leather-finished black granite and offers additional room for prepping meals. An extended, granite-topped counter with a sink separates the kitchen from a casual dining area, brightened by the addition of a new window on one wall. 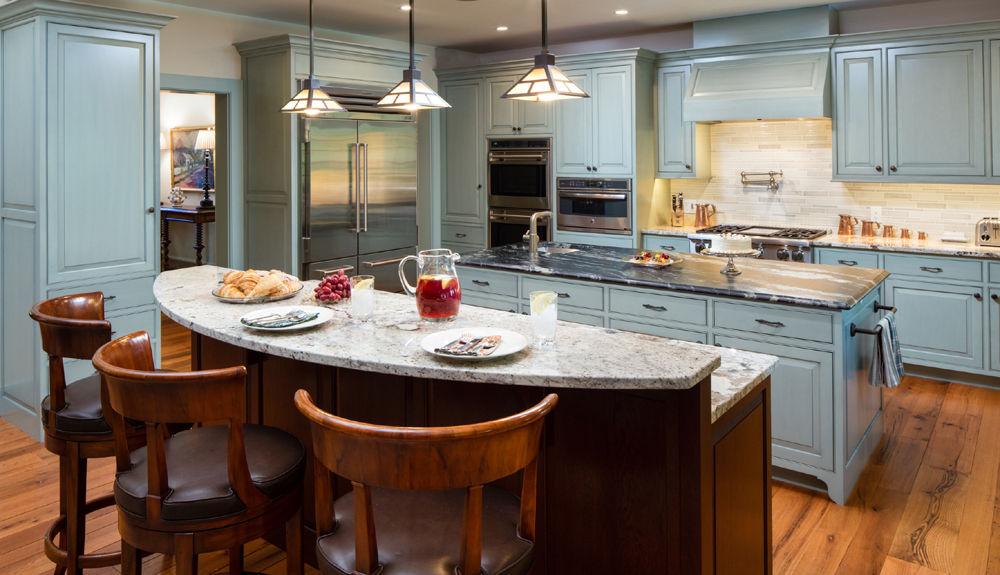 The polished granite island helps define the kitchen as a separate space from the living room.

The cabinetry, designed by Soupcoff and custom-built by Premier Builders, adds interesting detail and character to the room as does a pretty glazed-tile wall behind the sink. “We wanted something that wouldn’t conflict with the granite countertops,” Cebula says. “The tile refracts light, which is a nice element.”

The cabinetry, painted in Wythe Blue by Benjamin Moore, ties the kitchen to the small dining area; the color also complements the room’s rough-hewn ceiling beams.

When the Appes bought the home, the large sun porch prevented natural light from seeping into the highceilinged family room. Cebula solved this problem by painting the family room walls off-white (Misty Air by Benjamin Moore), set off with trim painted the same blue-green color as the kitchen cabinets. Again inspired by the Brunswig & Fils drapery fabric, Cebula and Irene chose furnishings and accessories in soft blues, yellows and red, tying the room visually with the kitchen and making the whole space more intimate. A painting from the Appes’ art collection hangs over one of the sofas. 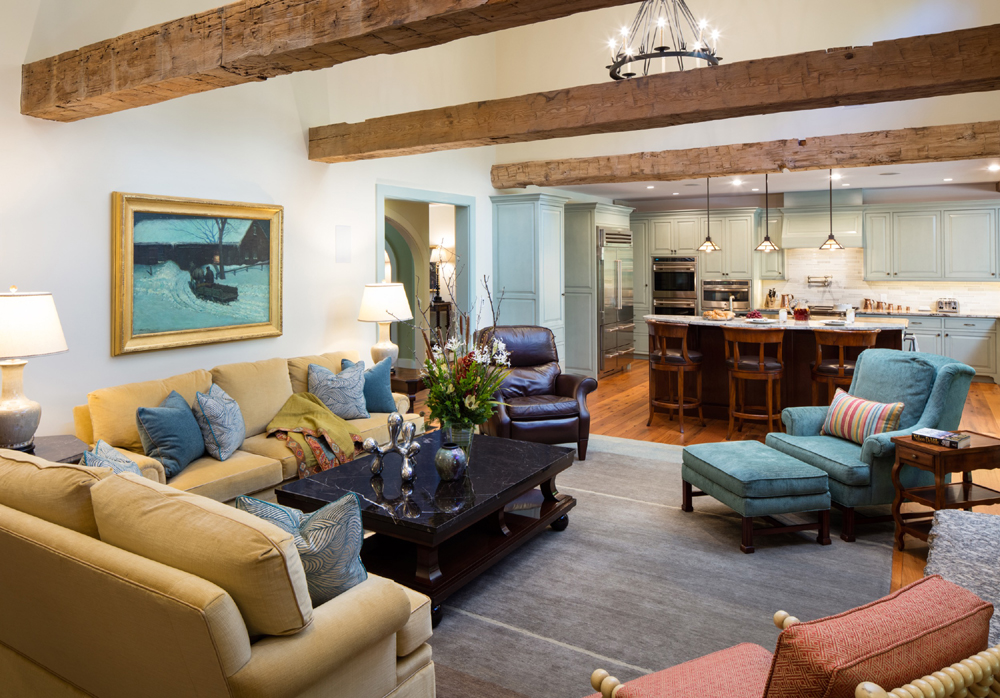 Rough-hewn ceiling beams contrast nicely with the bright living room. The sofa, loveseat and coffee table are from Baker Furniture; the leather armchair from Hancock and Moore; and the upholstered armchairs from Hickory Chair.

Soupcoff made the existing fieldstone fireplace the new focal point of the living room by adding a mantel and a flat-screen television. “Two hundred years ago, we sat around a fire, now we sit around a TV,” Soupcoff says. “In my mind, it’s the same thing. We wanted to make the television and fireplace the same element.”

Getting the television installed, however, took a little bit of doing. “Michael (Appe) really wanted the television over the fireplace,” says Ken Kumph, president of Premier Builders. “We dismantled the stone and created a pipe conduit to handle the necessary wiring to get power to the TV.”

On the other side of the fireplace from the kitchen is a mahogany wet bar, designed by Soupcoff and custombuilt by Premier Builders.

Directly across from the family room and right off the front entrance, the formal dining room is open and light. Painted a warm green (Mesquite by Benjamin Moore), the space was transformed by removing solid walls and creating arched openings on two sides. New light fixtures update the space, and the warm oak floors—also found in the kitchen and family areas—unite all the spaces.

Landscaping around the house— designed by Terra Firma Landscape Architecture of Portsmouth and maintained by Piscataqua Landscaping Company of Eliot, Maine—is simple, emphasizing natural plantings and complementing the home’s heavily forested setting. The pool area is updated with new furniture by Gloster and an outdoor fireplace. The home is also high tech, featuring state-ofthe- art sound and security systems, designed and installed by Audio Video Experience of Hampton Falls.

The Appes moved into their renovated home during summer 2015 and love the results. “Working closely with people who want our vision and taste reflected in their designs made the project fun,” Irene says. Her husband agrees: “The renovations to the kitchen and living room were fantastic.” Everything is the result of great teamwork all around. 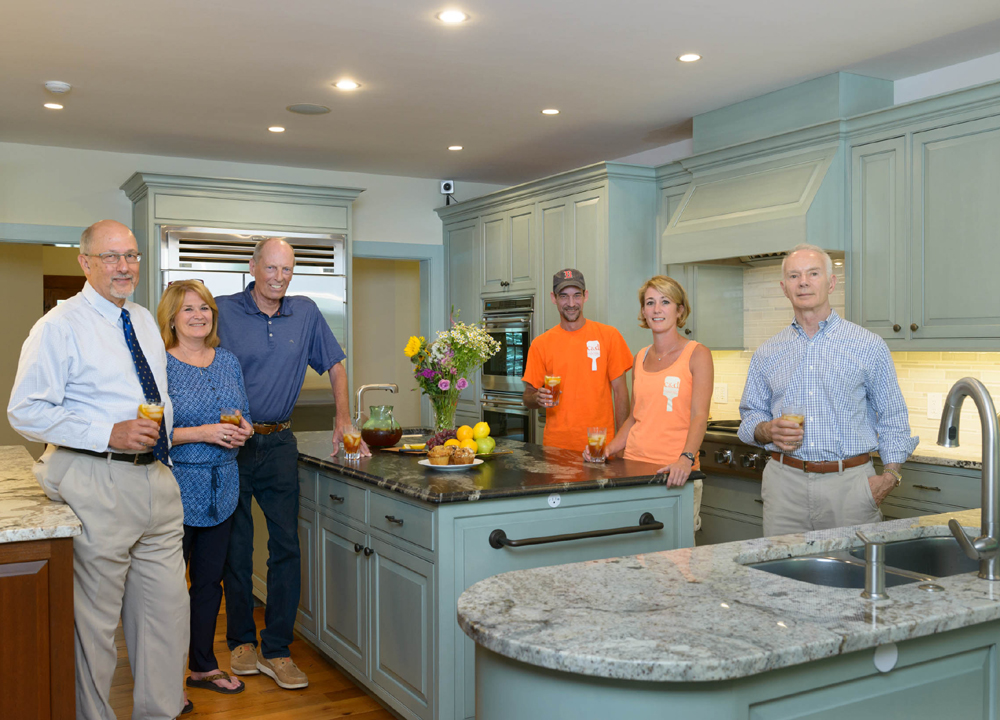 The Appes’ renovation was a two-year collaboration. Gathered in the kitchen are (from left): Bill Soupcoff of TMS Architects in Portsmouth; homeowners Irene and Michael Appe; Dave Wenners and Carly Baker of C&D Painting in Amesbury, Massachusetts; and Michael Cebula of Cebula Design in Newburyport, Massachusetts. 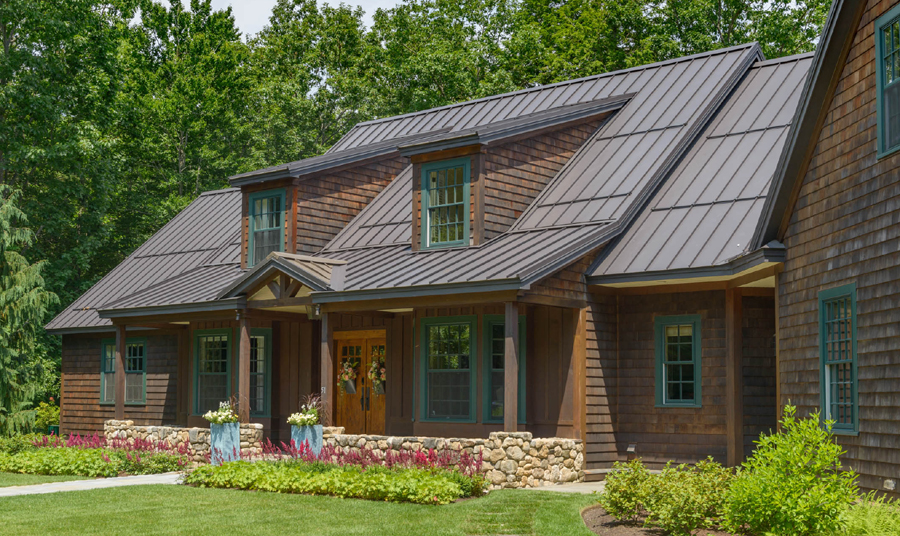 The home’s landscaping, designed by Terra Firma Landscape Architecture in Portsmouth, adds a touch of color to its rustic exterior. 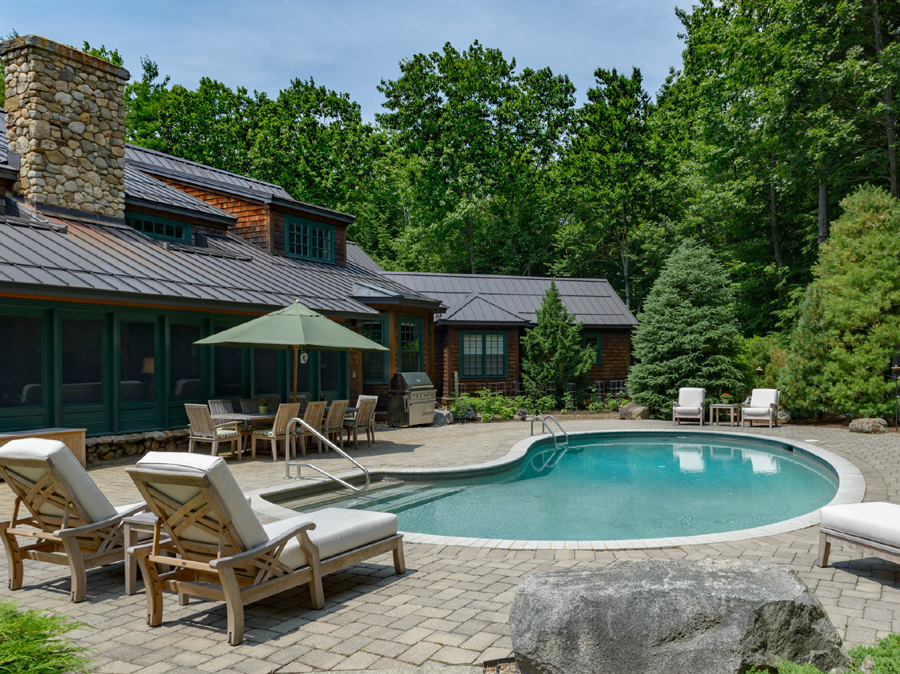 The pool area, ringed by trees, is a natural summer gathering spot. The outdoor furniture is by Gloster.
Categories: Architecture and Interiors, Renovation & Restoration