A retreat for skiers, by skiers

A second home just off the ski trails in Lincoln is custom-designed for lovers of snow sports. 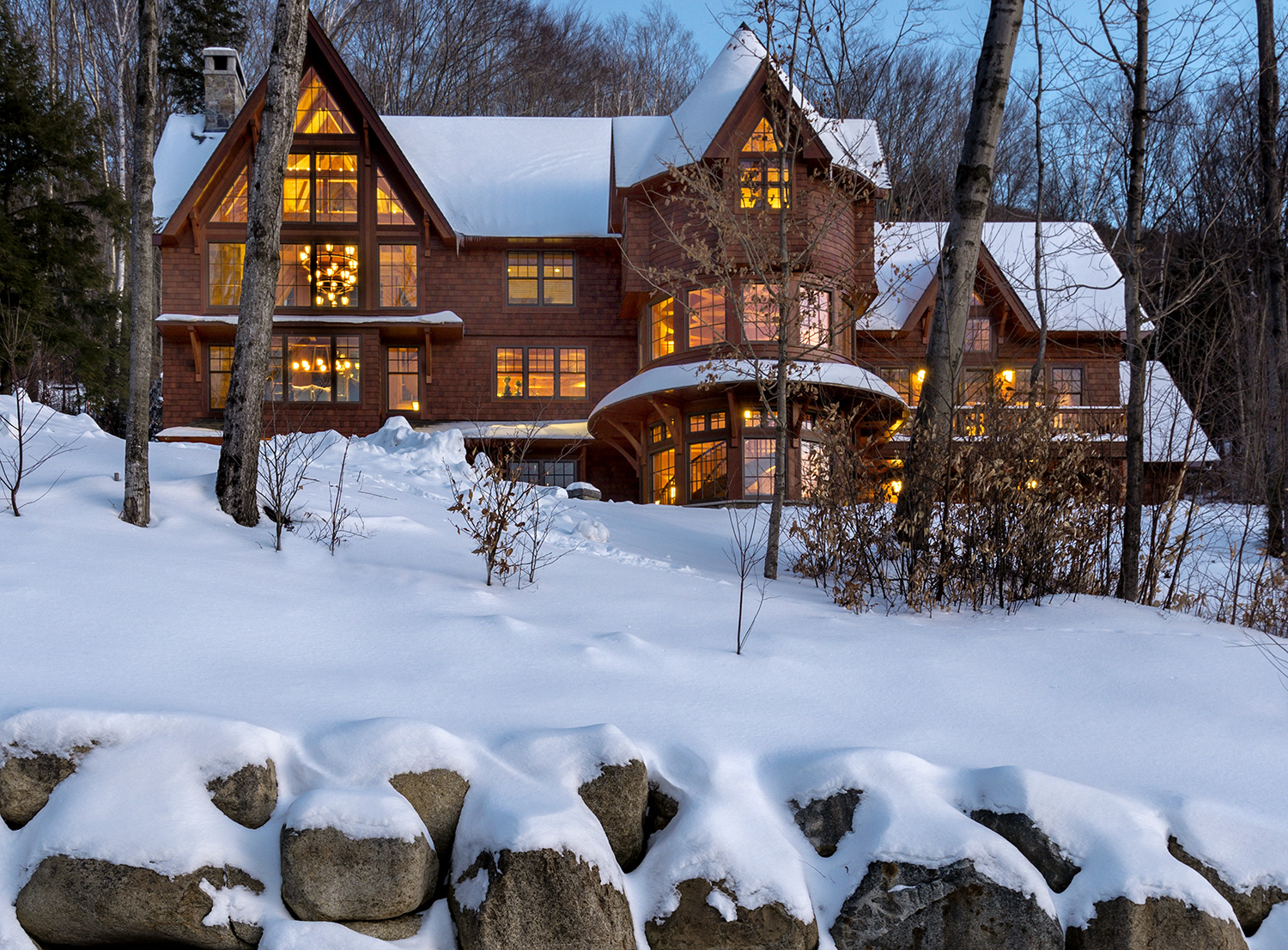 A rare, slope-side piece of property in Lincoln was a lucky find for the owners of this custom-designed Timberpeg home by Tom Samyn of Samyn-D’Elia Architects in Ashland.

It would be difficult to find a more suitable crew for creating a ski vacation home than the one that came together for a project near Loon Mountain’s South Peak a few years ago. The architect, builder, interior designer and millwork specialist were all avid skiers. The owners of this second home and their children were all involved in ski racing at the local mountain. In short, everyone’s priorities were aligned to develop the
perfect mountain retreat.

The three-story, 7,535-square-foot, custom-designed Timberpeg home stands next to the border of South Peak, one of the newer ski areas in the White Mountains. The home’s main entrance and garage are on the ground floor (the basement), where a circular entry tower helps transition visitors from the driveway to the mudroom. A spiral staircase in the tower leads to the second (or main) floor and also to the top. Ski-in/ski-out access is on the back side of the house via a covered bridge from the third floor. The home’s exterior is made from Douglas fir, and the roof is steeply pitched—which is both traditional and practical for a North Country home.

Inside, bold horizontal and vertical lines and high ceilings—in one room’s case, two stories high plus a peaked ceiling—convey a sense of, in the architect’s description, “soaring spaces.” There is a multitude of views. But despite the size of the rooms, the house’s overall flow and its carefully scaled furnishings work together to create the feeling of a welcoming retreat. 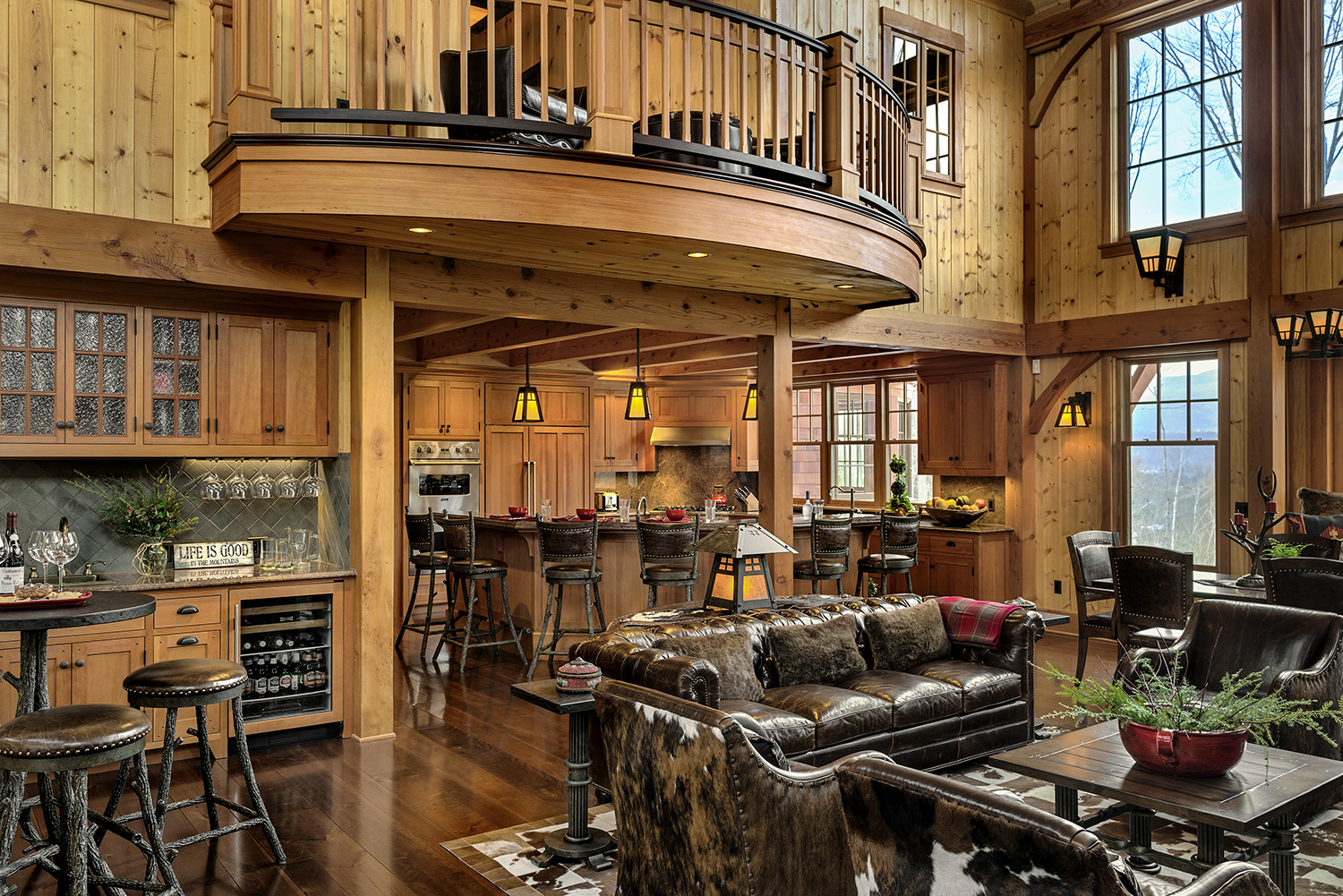 The great room, which is overlooked by a balcony, is the center for activity in the house.

The centerpiece of the house is an open-concept great room that incorporates living areas, a dining area, a kitchen and a bar. Upstairs, there are five bedrooms and an office, so the husband can work from home. A family recreation room in the basement has a pool table, a wet bar, two TVs and a fireplace. There is also an exercise room,  and five and a half bathrooms. Outdoors, a patio and hot tub—the latter protected by a wall on one side and a roof canopy—provide areas for fresh-air relaxation.

Throughout the house are references to the ski life, whether by association (hide-on-hair easy chairs and candelabra designed to look like antlers) or by direct representation (with lights that mimic ski gondolas, and furniture that incorporates design elements from skis and ski poles).

There are practical elements for skiers as well. Built-in ski lockers and shelves in the tile-floored mudroom are necessary for wet gear. There is also an area for ski tuning near the garage. Perhaps most important is that lovely access bridge that leads out to the slopes, or back into the house for warming up and après ski entertainment.

Approximately ten years ago, the homeowners—who had been considering an upgrade from a smaller second home—were delighted to discover this parcel of land with ski-in/ski-out potential. It was the last remaining such site in the area and was being looked at by several potential buyers, so the couple acted quickly. Their small children had already become competitive skiers, and the proximity of the spot to their local ski area made it ideal.

It was perhaps not surprising that the team the homeowners put together turned out to be skiers, since all the team members were based in the North Country. Members included architect and skier Tom Samyn of Samyn-D’Elia Architects in Ashland; builder Shad Lawton of The Lawton Company in Littleton, who skis and is a former racing coach (his father, Donald, who founded the company, also handled this project); interior designer Randy Trainor of C. Randolph Trainor Interiors in Franconia, who has taught skiing and racing all over the world; and millwork specialist Mitch Greaves of Littleton Millwork Inc. in Littleton, who also skis. In fact, Trainor had previously coached Greaves’ sons in ski racing.

The homeowners wanted a second home that served and reflected their love of skiing and entertaining. In terms of aesthetics: “The homeowner [wife] wanted it to be sophisticated but comfortable,” Trainor says. “She also didn’t want it to be too much of a cliché in terms of the skiing motif.”

Out on a ledge

The house was designed by Samyn, and the exterior (the frame, insulation, windows, etc.) built using Timberpeg materials. Samyn has designed many North Country homes, but considers this one special due to its verticality and unique lines, including the tower and spiral staircase. “When you go into the house, you can’t stop looking at it,” he says. “It’s not like anything else. It’s almost a storybook kind of home.” There are quite a few stairs, he notes, but also an elevator.

The Lawton Company came to the project with a lot of experience in building residential and commercial ski properties—the company built the base lodge at Bretton Woods and also the Golf and Nordic Center there. The biggest challenge for this house, says Janel Lawton, wife of Shad and co-owner of the company, was the site work.

“The lots are small and close to each other—and on a ledge, which required blasting,” she explains. Because of the proximity of neighboring houses, the blasting was “a delicate operation,” as she puts it. The Lawton Company served as a general contractor, performing all aspects of the building and supervising subcontractors as needed.

“High country” inside and out

Trainor has worked on many North Country homes and brought her years of skiing on different continents to the project. “I have been teaching ski racing all over the world for more than forty years,” she says. “That background was what I channeled when I put this together.”

The house has walls of pine and Douglas fir, and floors of dark-stained cherry throughout as well as furniture in various types of wood, leather and metal. The two-story great room has a balcony overlooking it from the second floor. This entire space is topped by an enormous steel chandelier. This piece, from the Salt Lake City-based Hammerton company, arrived in a crate so large that the crew determined it would not fit through the door of the finished house. So the house was built around the chandelier. The steel light fixtures by Hammerton throughout most of the rest of the house form one of its central design elements. The juxtaposition of the woodwork and steel conveys a “high country” feel. Trainor says that while many of the fixtures were incorporated as part of the architectural plan, she worked with Hammerton to create additional ones, such as the bar stools with bases that look like old-time ski-pole baskets and the “antler” candelabra on the dining room table.

The great room has a two-story fireplace in New Hampshire granite and other native stones, a wet bar and a massive dining table approximately ten feet long. Comfortable, sturdy furniture in leather and hair on hide surround a coffee table in front of the fireplace. Although the prevailing colors are those of natural materials—brown wood and gray stone—there are highlights of red (the wife’s favorite) throughout: in a plaid throw on the couch or the color of the candles in the candelabra. Hair-on-hide rugs and Southwestern geometric designs on hassocks, throw pillows and bedcovers make reference to ski homes out West. Trainor has spent a great deal of time in Vail, Colorado, and her design sensibility for this project makes use of that background. Other details, such as a huge armoire in the master bedroom, reference the furniture of ski chalets in Austria.

Stone is another essential design element. There are the fireplaces of course, but also the kitchen, with its quartzite countertops and backsplashes. Red onyx, travertine and marble are used in the bathrooms. 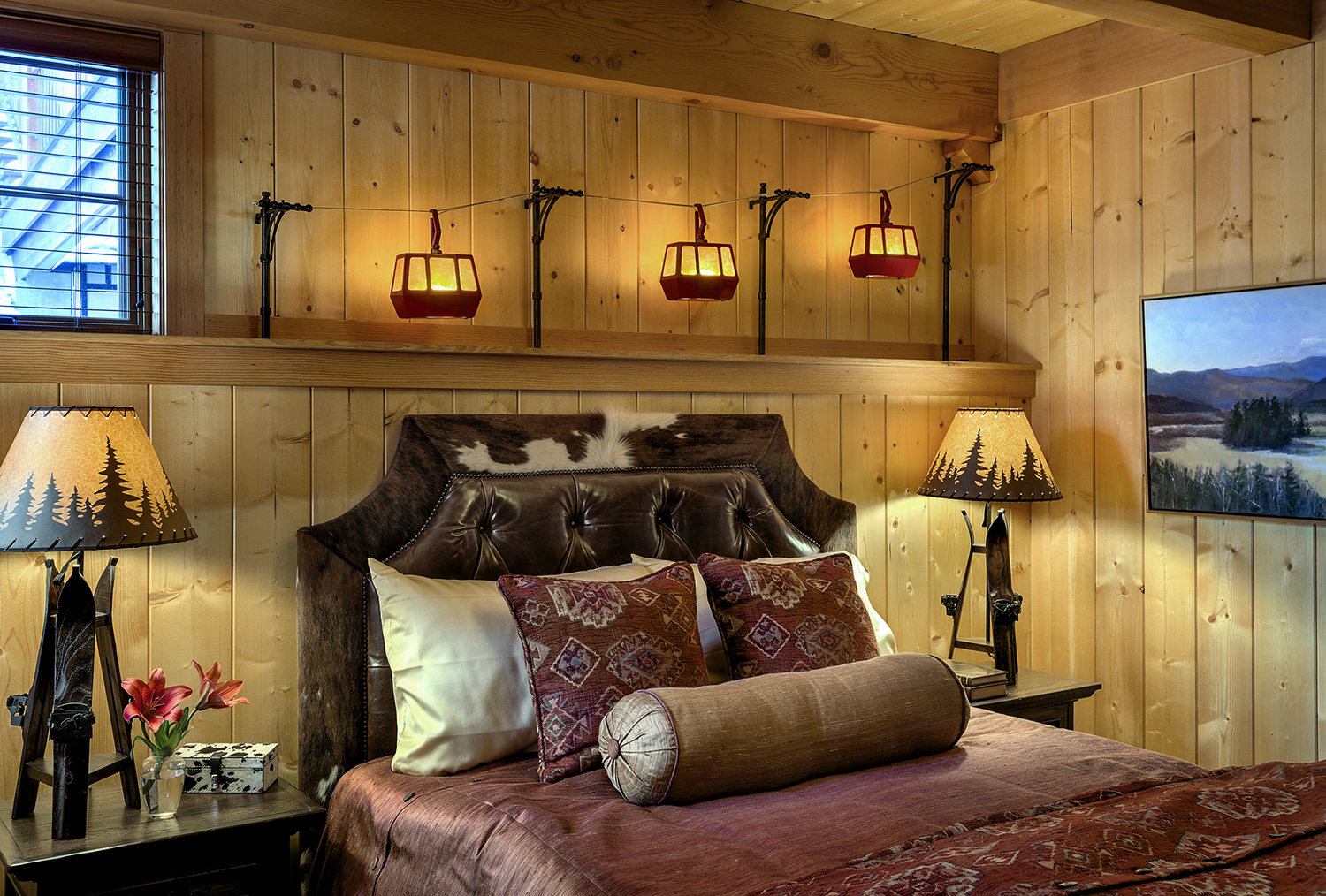 Lights over the bed that are designed to resemble ski lift gondolas on a cable are some of the many ski-specific design touches throughout the house. The painting is by Molly Wensberg, who is presented by McGowan Fine Art in Concord.

Among the greatest challenges for Trainor were issues of scale. “I wanted to make sure that the furniture was big enough and bold enough to stand up to the home,” she says. “For example, the armoire in the master bedroom is massive. It took four guys to move it up the stairs. But it had to be that big.”

At the same time, Trainor needed to make sure the atmosphere and furniture were comfortable for living, and that there was enough room for
occupants to move around freely. “It was a balance we had to strike,” she says.

As evidence of her success in achieving that balance, Trainor recently won an ASID (American Society of Interior Designers) award in the residential public space category for the basement family room, which incorporates a pool table (which needs to have ample room around it for players), fireplace, TVs, bar and more in a comfortable space. Trainor also counts herself pleased with her success in creating a variety of textures in the house, which served to add visual interest in the house’s somewhat limited natural color palette. She asked that a steel-topped pub table, for example, be hammered to make it more interesting than a completely smooth surface.

Trainor’s years of skiing also show in her practical touches, such as a twelve-plate boot dryer, the ski tuning room and weather-resistant carpet at all the outdoor entrances. She also made sure there is plenty of room for standing and milling around, because she has noticed that “people don’t tend to sit after skiing; they stand.” 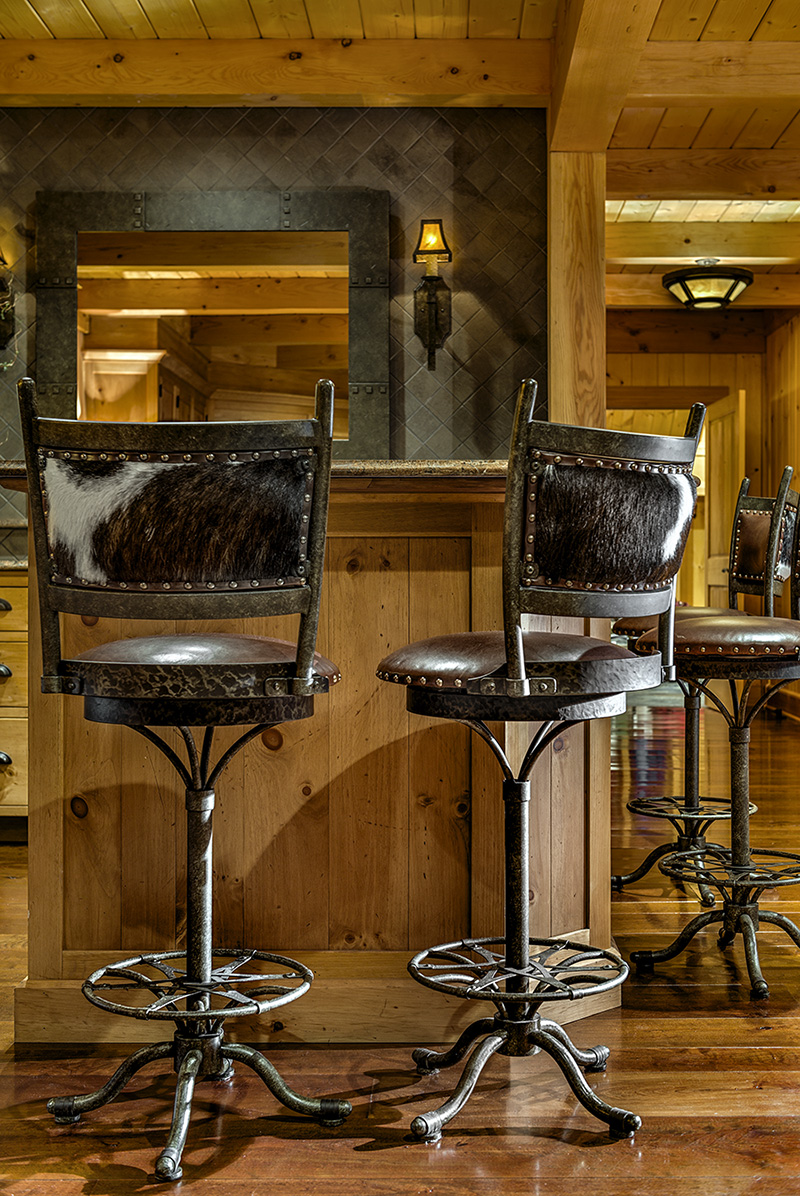 These bar stools have foot rests that resemble the baskets of old-style ski poles.

A great deal of the interior woodwork incorporated curves. That included the spiral staircase and tower, but also the office on the top floor, which is round and has two curved doors. Greaves of Littleton Millwork Inc. created the curved surfaces for both the tower and office. He also produced the kitchen cabinets, the cabinets around the TVs and bar, and much of the other fine millwork in the house. He was pleased that, after seeing his company’s work on the cabinetry, the homeowners asked him to create bedroom furniture as well.

A favorite spot for visitors is the upstairs bunkroom, with its six wooden beds that fit together, in Samyn’s description, “like the pieces of a puzzle.” Not surprisingly, it’s a very popular house for sleepovers. In fact, the whole house has become the “go-to” spot for parties, Trainor says.

In all, the house took about a year and a half to build, and was finished in 2013. No one on the team recalls any particular difficulties with the project—on the contrary, they seem to remember how unusually cooperative everyone was.  “I can’t emphasize enough how great this team was and the homeowners, too,” Greaves says. “It was a fun house to do.”

Janel Lawton echoes that sentiment, adding that the project involved a great deal of cooperation due to all the customization and that everyone worked well together.

It’s also possible that the project kept all its constituents in a good mood because—from its location to its layout to its design elements—skiing was never far from sight … and that is enough to make a skier smile, even in the dead of summer. 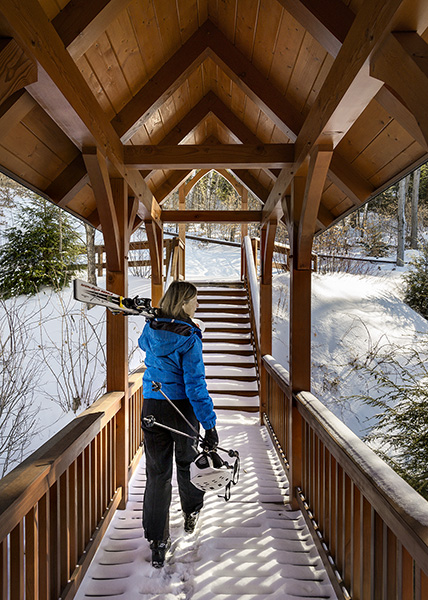 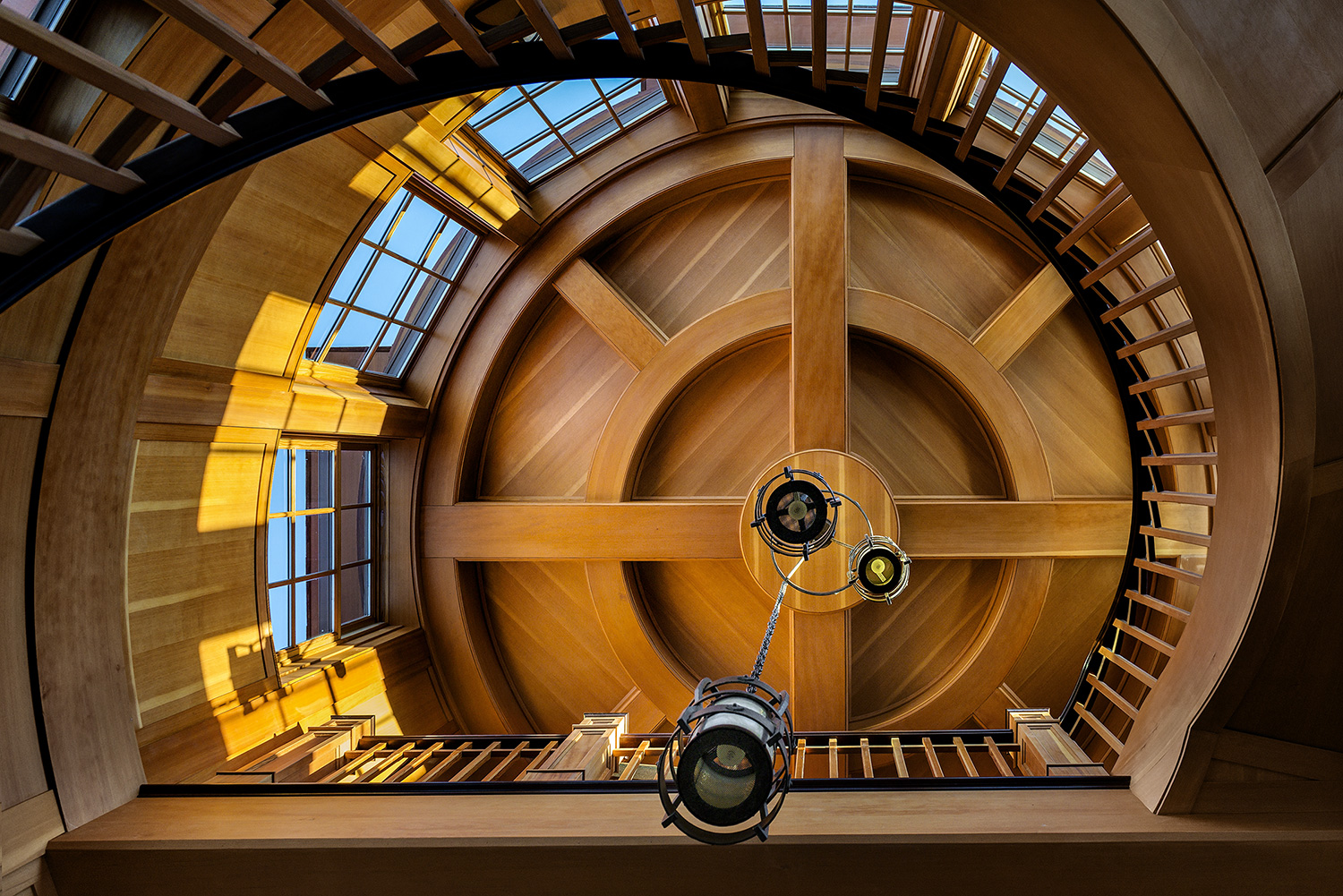 A steel light fixture from Hammerton descends from the very top of the tower. 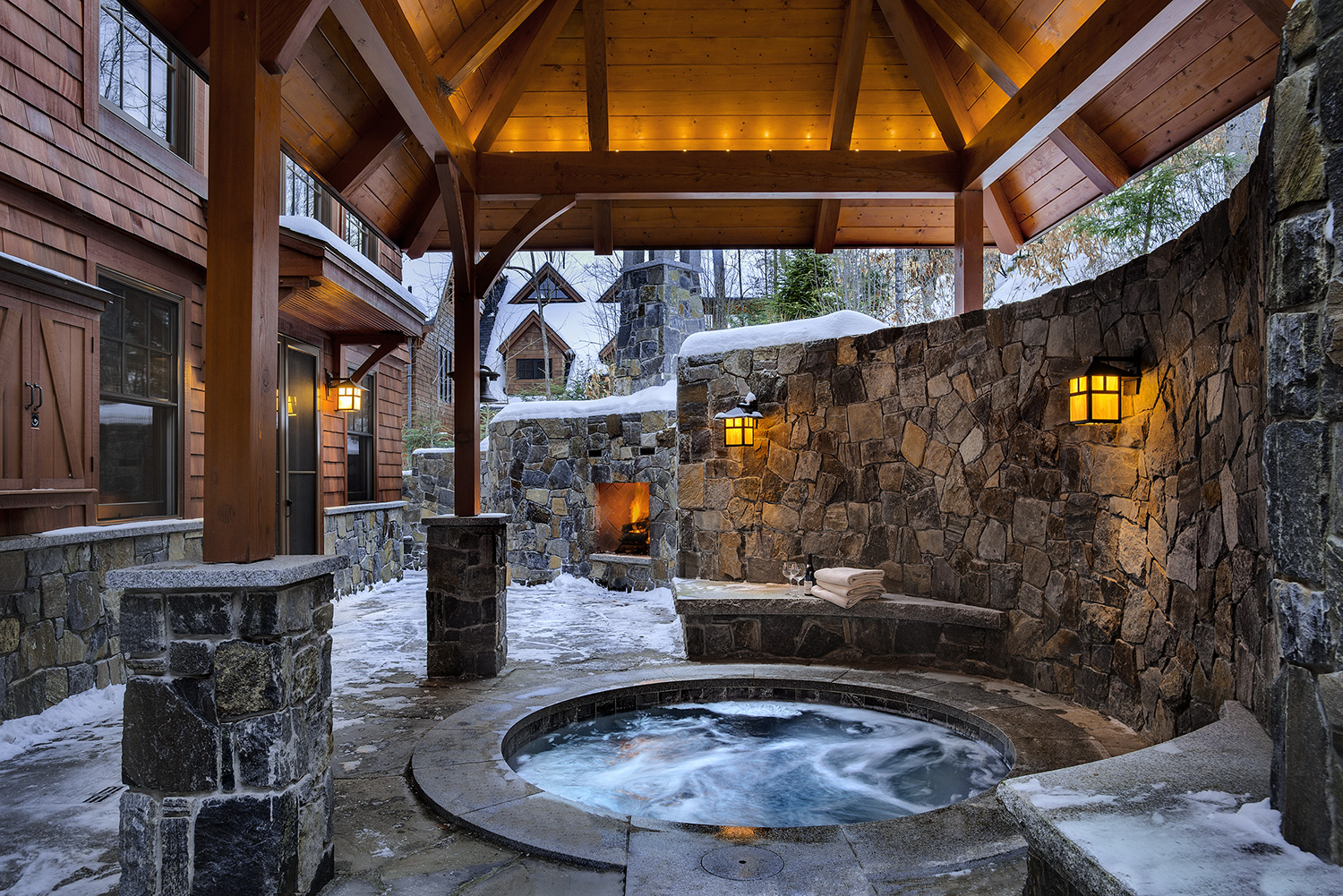 An inviting outdoor hot tub for après ski is protected from the elements by a roof and a wall on one side.
Categories: Architecture and Interiors