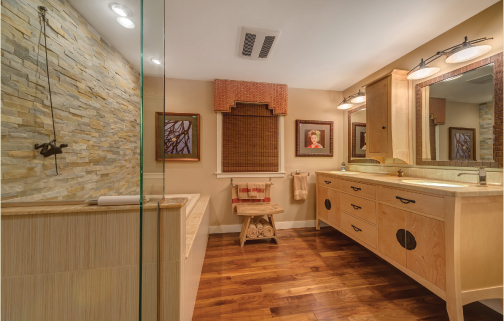 The glass shower to the left of the bathroom door allows a view through to the tub and the rest of the room.

About three years ago, Amherst home- owner Steve Boucher decided it was time to redo his master bedroom and bathroom, which had last been updated in 1990. “I decided to employ an Asian motif,” says Boucher, who has traveled extensively in Asia, with more than sixty visits to Japan and five to the Himalayas. He was going after “a sense of spareness,” he says, rather than a literal re-creation of, for example, a Japanese bathroom. “I saw this as an opportunity to start with a clean palette.”

Another driver for change was the awkward layout in the existing bathroom. “When you walked in, there was a sink to the left and to the right of you, in a little hallway,” says Charlie Covell of Wilton, Boucher’s longtime contractor and collaborator. The setup was impractical, Covell says, because two people using the sinks at the same time would be bumping into each other’s backsides. There was also a corner shower that was smaller than Boucher’s ideal.

A battle of inches 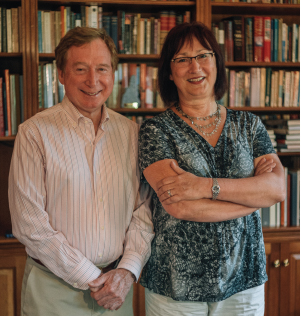 In order to configure the space better and make room for a new shower, the bathroom needed to “borrow” some space from the master bedroom closet, which abutted the bathroom. Covell executed this plan, which included adding a new window and built-in shelves to the closet. He also replaced the bathroom window and centered it along the bathroom wall.

Specific goals for Boucher included keeping the jet tub as well as adding a bigger shower and more practical vanity. For help in realizing his vision, he turned to Goedecke Flooring and Design Center in Bedford—and began collaborating with interior designer Colette Joyce. She was excited about the Asian theme Boucher had selected, because a themed project is rare and challenging.

At times, “It was a battle of inches,” Boucher says, but eventually the new plan incorporated the desired glass-and-tile shower and tub as well as a new, large, figured maple vanity with two sinks along the same wall and a medicine cabinet over it. The team made a small structural adjustment in the bedroom as well. “The bed was ‘disappearing’ in the room,” Joyce says, “so we built out the wall to form a recess to accentuate the headboard.”

Covell, who is retired except for the work he does for Boucher, says he enjoys solving spatial problems like this. “I like challenges,” he says. 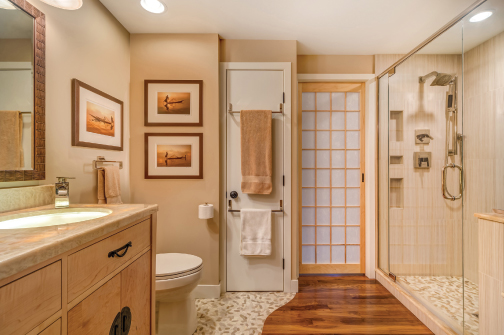 The bathroom has walnut flooring except in the toilet area, where the designer used a river stone surround that matches the shower floor.

In order to create a clean, updated look, the design team removed the wall-to-wall carpeting that had been in the bedroom, and installed new walnut flooring in both bedroom and bathroom. (All the materials used on the surfaces besides the flooring were from Goedecke.)

“It is not common to use wood in the bathroom,” Joyce says, “but we wanted to create a master suite feeling by connecting the two areas with materials. We then used river stone around the toilet.”

That sliced river stone also ties in with the floor of the shower. The glass shower is on the left on entering the bathroom and affords a view straight through to the tub, which is backed with stack stone. The large jet tub was reset into an onyx surround and refaced in wood.

Boucher says Joyce selected most of the materials, and he went along with most of what she chose. For example, Boucher says he initially wanted dark bronze fixtures, but Joyce encouraged him to choose the polished nickel, which turned out to be to his liking. 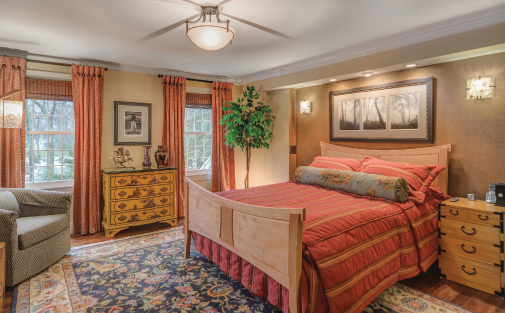 In the master bedroom, a shallow recess was created to accentuate the bed and its headboard.

The large vanity was custom-made in figured maple by Cherry Pond Fine Furniture in Jefferson (which had also made Boucher’s bed and bureau). The new onyx top was then lighted from below, creating a soft, glowing effect at night. The two sinks in the vanity were originally made of glass, but looked “like little flashlights” when the light underneath was on, Boucher says. The glass sinks had been his idea, he says, although Joyce had warned him against them. In this case, “I ignored her at my peril,” he says. Eventually, the glass sinks were replaced by ceramic ones.

Among the natural-type materials used in the bathroom is the striking stack stone ledge over the tub. The shower wall tile as well as the tile on the outside of the shower and tub reference bamboo—but subtly. Most of the materials were chosen to convey rather than replicate an Asian sensibility, Joyce says, so as not to overwhelm the design with the theme.

The walls of the bathroom are painted a soft, buttery yellow. The window has a rattan shade and a fabric valence in an Asian-influenced shape. All the artworks are photographs that Boucher took on his travels in Asia. There is one portrait of a geisha, but the rest are of faraway figures or scenes. Joyce reframed all the photos in simple wood frames to harmonize with the decor. Other touches are sliding, Shoji-style rice-paper screen doors for the closet and bathroom, and a simple teak bench in the bathroom. 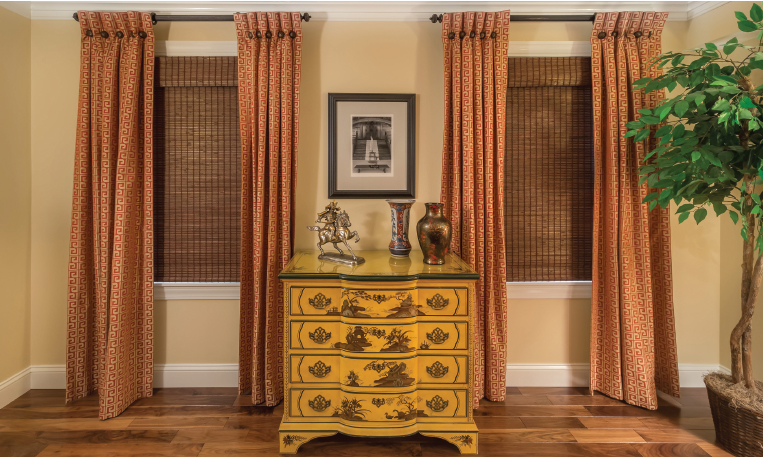 A yellow mid-century chinoiserie dresser adds a pop of color to the predominant browns, reds and golds in the rest of the room.

In the bedroom, Joyce used a palette of deep browns and golds, with pops of red. The walls were painted yellow-gold, with a textured, brown fabric wall covering for the bed recess. In the recess are two onyx-covered light fixtures that shed soft light over the room. The bed and chest that were custom made for Boucher are figured maple.

Joyce chose a red bedspread to offset the gold tones in the room. Its colored stripes complement the maple and dark fabric backdrop. The window treatments employ the same red figured fabric and rattan shades as in the bathroom (but in different shapes); and in this room as well, all the artwork is Boucher’s reframed photography.

Among the accent pieces are a yellow chinoiserie dresser from the 1950s or 1960s, which Boucher found in a store in Ohio, and a blue Oriental rug from the dining room that picks up the key colors in the bedroom. There are a few decorative elements, including a couple of urns and a statuette of a horse and rider, which Boucher acquired during his travels. “He has a keen eye for art pieces,” Joyce says.

One surprising touch is a TV that isn’t visible until it comes down from the ceiling on demand via an electrical hoist.

The virtues of planning

The resulting master suite is a calm and uncluttered space that hints at rather than broadcasts its Asian roots. The only thing left to do, according to Boucher, is to find a bench for the foot of the bed.

Renovations like these can be a challenge, but with advance planning, they become much easier, according to both client and designer. “The preliminary work is the most important,” Joyce says. “Spend the time planning. Even if you can’t do it all at once, at least you have the direction you are going in.”

Boucher agrees that taking time to plan was vital, adding that projects go well when all parties communicate ahead of time and during the process. “Steve was a delight to work with,” Joyce says.