While lovely throughout the seasons, this Jaffrey garden is striking in fall. 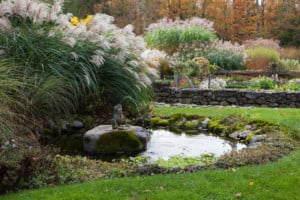 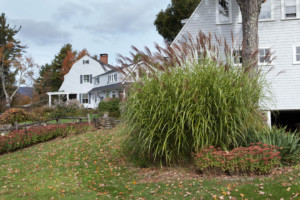 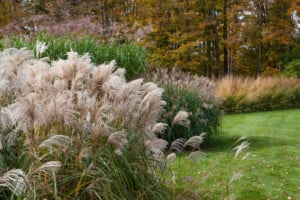 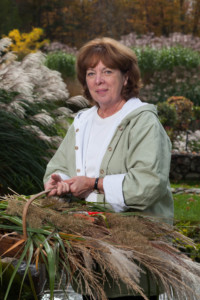 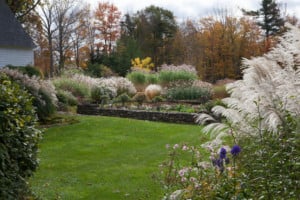 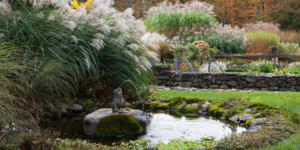 Located down a narrow gravel lane, the Pokorny garden in Jaffrey Center is a uhidden gem. With varied plantings of interesting and unusual trees, shrubs, vines and perennials, the garden looks top-notch in any season.

Designed and installed by Margaret Pokorny and her husband Gene, the garden has matured into a stately and lush setting for their circa 1907 Dutch gambrel home, where they have lived for more than twenty years. "The landscape had been neglected for many years when we bought the house, so it was a blank slate," Margaret says. "There were a few trees from the original planting, like the Japanese tree lilac (Syringa reticulata) in front of the house, and some great old maples, but there was no hardscaping or other plant material of note."

The Pokornys worked, during a ten-year period, to create rock walls, curving pathways, a small pond complete with frog fountain and other hardscape elements, including a wood-fired stone oven, fire pit and seating area.

On the original architectural plans, the house is called Sunnycrest. "That is pretty much what the property is," Margaret says. "The house sits on a small crest with two large fields, north and south. We have good sun and drainage. The garden we put in radiates from the house, becoming less structured as it goes out from the buildings."

And what a glorious garden it is! As a graduate of the Radcliffe Seminars program in landscape design, Margaret is a very knowledgeable plantswoman and trees are her passion. "When we started developing the garden, I was very interested in trees, shrubs and vines," she says. "We have planted some unusual things in all these categories, but I would say it is a garden of textures
and not a flowery garden."

For the love of trees

A walk around the property is an education in itself as each tree has a story or special significance, or is used in an unusual way. "This one, the blue bean tree, is called 'dead man's thumbs' because of its long blue seed pods," Margaret says. The trees in the crabapple allée were started as seedlings grown from the 'Catherine' crabapple the Pokornys have in the garden at their Boston home. "The castor aralias (Kalopanax pictus) are quite unusual," Margaret says, "I happened to get two small starts of it from Arnold Arboretum about fifteen years ago. They are now about twenty-five feet tall and have finally started to bloom."

She names the Japanese umbrella pine and fern-leaf beech (Fagus sylvatica 'Asplenifolia') as her two favorite trees. "I also have seven Carolina silverbells, which I started from whips about fifteen years ago. They are thriving in New Hampshire and have produced seedlings of their own," Margaret says.

She has a small orchard of fruit trees and has also trained espaliered apple, plum, pear and peach trees to grow
on the split rail fence that borders their large and very productive vegetable garden.

The Pokornys have lived in Boston's Back Bay for about thirty-two years and still have a home there, although now that they are retired, they are spending more of their time in Jaffrey. Margaret put the information she learned at the Radcliffe program to good use in Boston. Her final project was a history, site analysis, tree inventory and master plan for the Commonwealth Avenue Mall, which is the park that runs through the Back Bay.

"This set me on the path that I am now on," Margaret says. "Since 1992, I have been working on the restoration and care of that park."

She is the chair of the Commonwealth Avenue Mall Committee, a group that works in partnership with the Boston Parks and Recreation Department to do all the planting, pruning, disease treatment and other care of the six hundred trees on the mall. The group also cares for the sculptures, installs new benches and has undertaken a significant turf restoration project. Because of her involvement, Margaret was awarded the first Park Partners Award by Boston Mayor Thomas Menino during the Boston Flower Show last spring. The award recognizes Boston citizens who make a significant contribution to the beautification of the city's parks.

Margaret finds gardening in the country to be very different from gardening in the city. "City gardening is about close interaction with your garden, focusing on structure, hardiness, amount of maintenance and appropriateness for the urban setting," she says. "Gardening in New Hampshire is all about survival. It is gardening on a different scale, making grander gestures. It is about seeing things in masses and from a distance. It is about being part of, and blending in with, the natural landscape."

Although her Jaffrey garden is truly a garden for all seasons, Margaret considers it to be at its best in autumn. With the native trees providing the larger backdrop, her enkianthus, Japanese maples, fothergillas, yellowwood, viburnums and Kousa dogwoods supply bright patches of extra fall color closer to the house. A border of pink Sheffield mums in the vegetable garden blooms until Thanksgiving. Dark blue monkshood and Montauk daisies blossom late, and sedum 'Autumn Joy' stays colorful until it is covered with snow.

But the real stars of the fall garden are the ornamental grasses. Margaret has a special interest in them. "About fifteen years ago, I decided to make a garden of them with the hopes of selling plants directly to landscape architects. That never really took off, so I'm glad I planted them as a garden and not as a nursery," she says. "My garden is really a fall garden. I have tried many, many different grasses here. Some make it, some don't. Some bloom, some don't, but they do make a wonderful display in the late summer and fall."

Margaret has planted many varieties of Miscanthus sinensis, including 'Silberfeder', 'Graziella', 'Autumn Sunset', 'Morning Light', 'Gigantus' and 'Malepartus'. Some other grasses she has had good luck with are varieties of Molinia and Calamagrostis.

Margaret especially appreciates the fact that ornamental grasses are low-maintenance plants. "They don't require anything but cutting back once a year, which is no small task. But I don't fertilize or water them," she says. "They are big and dynamic, and you don't have to put your glasses on to see and appreciate them!

"I love my New Hampshire garden," Margaret continues, "and I've learned so much making and caring for it. It is a very creative and satisfying process."