Eighteen New Hampshire designers worked together to restore the Bridges House in Concord, so it could serve the government and public once again. 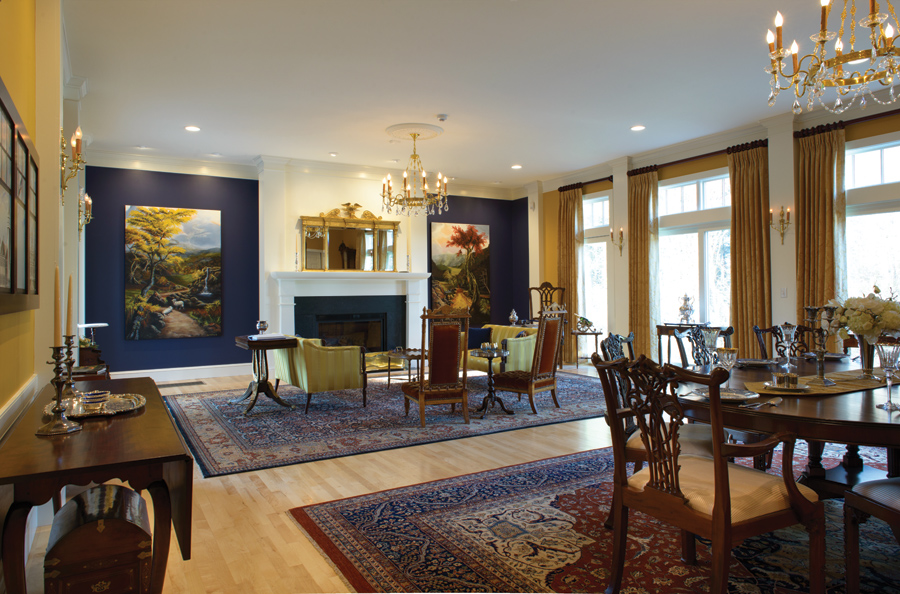 New Hampshire’s Bridges House, the state’s executive residence, has a proud history dating back to the 1600s, when the property it now occupies was a ferry landing. Revolutionary War veteran Joshua Thompson later lived on the land. When the handsome brick house was built in 1835, it was one of the first Greek Revival structures in the Concord area. And in the mid-twentieth century, U.S. Senator Styles Bridges lived there for many years. In the late 1960s, Bridges’s family gave the building, including its historic furnishings and collections, to the state of New Hampshire. The house served the governor’s office as a place for meetings and events.

As the years went by, however, the building fell into disrepair. By 2004, when former Governor John Lynch took office, the atmosphere inside the home was “cold, dark and off-putting,” as described by former First Lady Dr. Susan Lynch.

Eight years later, “it has been transformed into a warm, bright, inviting home,” Dr. Lynch says. Bridges House stands proud once again thanks to the efforts of the Friends of Bridges House organization, of which Lynch is the president of the board. These efforts include fundraising and renovations designed to return the house to its former level of appearance and service, while being in compliance with the Americans with Disabilities Act (ADA).

A major part of this transformation is due to the work of the eighteen New Hampshire designers who participated in the Bridges House show house project last fall. The designers—under the direction of show house chairwoman Cindy McLaughlin and fellow committee members Debra Douglas, Nancy Gould, Dr. Lynch, Clara Monier and Jackie Smith—reworked eleven rooms as well as several hallways and closets to create a home that New Hampshire can truly be proud of.

The Friends of Bridges House
913-4210
www.friendsofbridgeshouse.org

A show house always offers designers the opportunity to present their best work, and the Bridges House project was no different in that respect. But where it diverged from the norm, according to McLaughlin of Upstairs Downstairs in Manchester, was that the designers were also asked to create rooms that harmonized with each other and that kept to or referenced the period of the house. In addition, rather than using their own furnishings and decorative elements, designers worked with many pieces of furniture and artwork that belonged to the house, and would stay there after the show house was over.

The history of the house was an inspiration for many designers, including Julia Dias of Julia Dias Interiors in Bedford, who developed the Great Room (formerly the barn). The Great Room, also called the Mount Washington Room, is the house’s formal meeting area. Dias’s regard for the former occupants inspired her to create a room that strikes a balance between stately and comfortable. More direct sources of inspiration were other historic homes, such as George Washington’s Mount Vernon, as well as a seven-drawer chest and an old train station clock from the Bridges House. She notes that although the home is Greek Revival, she used many Federal-period elements for the furnishings, which helped convey a sense of sophistication. “My intent was to make it feel a little like a meeting room in the White House when you walk in,” Dias says.

In this she succeeded, with a gracious space that conveys stateliness and warmth. The room’s palette includes deep blue, gold and maroon. A gold-leaf eagle-topped mirror above the fireplace makes a definite Federal statement. Other furniture includes two Sheraton settees in yellow/gold, reproduction Federal-period fabric as well as vegetable-dyed rugs modeled after late-eighteenth-century patterns. Among the most arresting features of the room are the two landscape paintings by Lisa M. Nelthropp, which feature scenes from the White Mountains. The paintings, surrounded by deep blue, are in recesses on either side of the fireplace.

Nelthropp, an historical muralist and primitive painter in Wolfeboro Falls, was responsible for two other show house rooms, the vestibule and the foyer. In the vestibule, she plastered the walls to make them look like parchment, using a tinted plaster that was hand-rubbed with antique wax. Nelthropp chose the texture and pale color to serve as a backdrop for historical paintings belonging to the house. On the walls of the foyer, she painted a monochromatic mural that depicts historical and geographical scenes from New Hampshire. “I wanted a China-trade feel,” she says. According to the notes she wrote for the show house program, “This mural allows viewers to be transported into a long-forgotten era, immersing them in living history, and therefore preserving a part of our state heritage.”

The house’s new kitchen is vital to the service role of the house. The space had to accommodate the preparation of food for a large group (up to twenty people) while, according to designer Sue Booth of Vintage Kitchens in Concord, also feeling comfortable and intimate enough for an overnight guest who might be dining or preparing food alone.

An important part of the design is a central island that can be used for food preparation or informal meals. The island and other counters are topped with Vermont Verde Antique, a dark green serpentine stone that looks like marble but is as hard or harder than most granite. The cabinetry, built by Vintage Kitchens’ shop, Vintage Custom Cabinetry, is tiger maple sourced from New Hampshire. Some cabinets are plain, and some have applied molding that is a subtle nod to the period of the rest of the house; “We really tried to pick up on that Greek Revival molding,” Booth says.

A special New Hampshire touch are six wooden relief panels that depict locations such as the Shaker Village in Canterbury and Saint-Gaudens in Cornish. The panels are by master carver Jeffrey Cooper.

When asked if she had achieved that goal of making a large kitchen feel comfortable, Booth says, “The thing
that I observed [during the show house] was that it was the place where people gravitated and just hung out talking.” In other words, it pulled people in—like a regular kitchen in any house. Booth notes with gratitude that
many companies donated materials, such as the wood and the Vermont Verde stone. “I was honored to be part of this process,” she says.

Show chair McLaughlin designed the master bedroom, a space that first struck her as depressing. She employed bright colors—such as gold, yellow, orange and green—to brighten it. From the Bridges’ collection, she used a five-drawer chest and an early 1800s Windsor back chair in pristine condition. She also reupholstered a chaise lounge from the house in bright fabric. “I wanted the room to be a cheerful and happy place,” she says.

Friends of Bridges Show House Committee members Gould and Smith, not designers by trade, notes Gould, took on the small upstairs bedroom because it didn’t have a designer. “We pulled it together in about three weeks,” she says. The result is a charming and cozy room with two twin beds, a small fireplace and three windows dispensing plentiful natural light.

Gould and Smith decided to base their design around three hooked rugs they’d found in the house: two are on the walls; one is on the floor. The rugs were part of the house’s inventory, but the women didn’t know much about them. Then, as the show house opened, they received a delightful surprise: “On the very first day, a lady who had visited the house when the Bridges still lived there walked in and said, ‘Oh my goodness, these are Mrs. Clement’s rugs!’” Gould and Smith knew that Mrs. Clement, mother-in-law of Styles Bridges, had lived at the house and was a knitter. While they surmised that she might have hooked the rugs, they didn’t know she had until the visitor told them so. While there’s no way of knowing whether Mrs. Clement used this cozy upstairs room, the excellent light would be ideal for doing handwork, Gould says.

Downstairs, the original dining room, now called the Garden Dining Room, was designed by Ann Henderson of Ann Henderson Interiors in Keene. For this room, she chose a Hepplewhite mahogany sideboard and historic White House china from the Bridges’ collection. She also mixed slipcovered pieces from the Bridges’ furnishings with her own choices, limiting what she called the “serious antiques” to create an updated yet still traditional room. She replaced the existing pedestal table with a smaller round one that would provide more openness and flexibility, and covered it in new fabrics in hues from nature: blue, brown, white and orange-red.

Judy Dibble of Brookwood Designs in Hopkinton painted the panels surrounding the dining room with scenes of New Hampshire. She also painted the linoleum floor cloth with a design developed by Henderson, and glazed the ceiling and bookcases in a sky blue designed to play up the gold in the displayed china. Gold is a recurring motif throughout the room—it appears in the beading of the panel frames, in the chandelier, and in the gilded side tables and epergnes.

Success past, present and future

Altogether approximately 2,400 people visited the designer show house in November. “The Designer Show House was a great success,” Dr. Lynch says. “We had so many people from all over the state and even from other states. Everyone was amazed at the results! The folks who were most impressed were those who had seen the Bridges House before the renovation.” Dr. Lynch also added that some visitors had known the Bridges family and shared stories of the family’s time in the home.

The house was also a great success from a design standpoint, McLaughlin says. “All the designers put forth their best effort and coordinated with each other so well. From room to room, everything flowed beautifully.”

The first and largest phase of the Bridges House renovation is essentially complete, Dr. Lynch says. In addition to the improvements made by the show house designers, updates included better safety and security systems, improved climate control, and ADA compliance. A new floor plan was key to this work: A porch (not original to the house) was converted to a multifunction dining/meeting room. And a space that had morphed over the years from a barn to a garage to an apartment with kitchenette became the great room.

Additional upgrades—and upkeep—will be made possible through ongoing fundraising efforts by the Friends of Bridges House. The use of the house is coordinated through the governor’s office, and has already been used by Governor Maggie Hassan and her staff, Dr. Lynch says, adding that Hassan’s husband, First Gentleman Tom Hassan, has agreed to join the Friends of Bridges House Board to continue the work.

Through the efforts of Friends of Bridges House, the designers, and many volunteers and contributors, Bridges House is once again a part of New Hampshire its citizens can be proud of. “When I walked in on the evening of November 10 [for the ribbon cutting], I was moved to tears by how beautiful the house looked,” Dr. Lynch says.