Thanks to architect Sloane Mayor, a 1994 Hanover ranch is now a sleek, energy-efficient home. 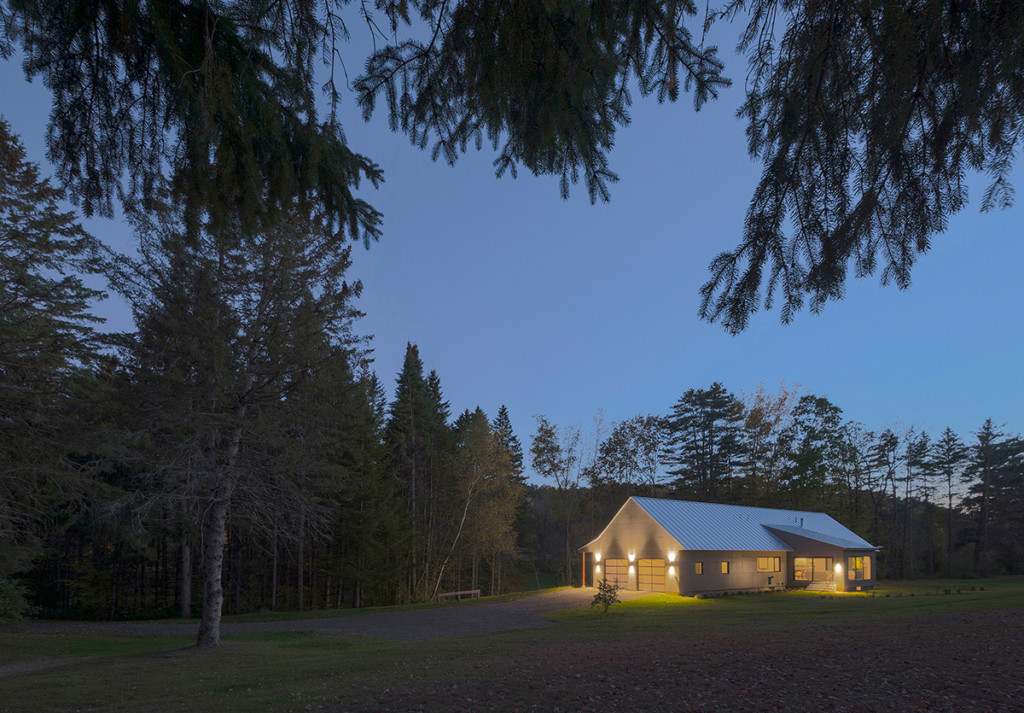 Dan Hedges’s LEED-Silver-certified Hanover home is located on a peninsula in the Connecticut River. Once a ranch-style home, the structure was completely redesigned by architect Sloane Mayor and rebuilt.
(Photography by Gary Hall)

With its clean lines and modern design, it’s difficult to imagine that Dan Hedges’s home—now a LEED-Silver-certified home in Hanover—was once a tired, ranch-style house. Hedges and his late wife, Adele, discovered the property while scouting possibilities for a second home near Dan’s alma mater, Dartmouth College. Sited on a picturesque, wooded peninsula surrounded on three sides by the Connecticut River, “the house wasn’t much to look at,” he says. “But the site is amazing.”

The cost to tear down the original house and rebuild was prohibitive, so the couple and their architect, Sloane Mayor, now with UK Architects in Hanover, came up with an alternative: strip the building’s exterior walls to their studs, re-insulate and rebuild. Mayor and the couple’s homebuilding team—
including site supervisor Adrian Lakin and builder Kevin O’Hara from general contractor O’Hara and Gercke of White River Junction, Vermont, and LEED consultant Paul Leveille of Resilient Buildings Group in Concord—transformed the dated home, creating an energy-efficient space that’s sleekly functional and a bit unexpected in the rural
Connecticut River Valley.

There’s a lot to love about LEED-certified buildings (the acronym stands for Leadership in Energy and Environmental Design): they are cost-effective, use less energy and water, reduce carbon emissions, and use resources wisely. Dan and Adele built the first LEED Platinum home in Houston, Texas—“We were over-the-top into energy-efficient technology,” Dan says—and wanted LEED certification for their Hanover house as well.

“It’s a little more difficult to get a top LEED certification in a home renovation because some things are easier to accomplish in a new building,” Leveille says. A blower test before construction helped identify air leakage. In addition to re-insulating the home’s exterior, spray foam insulation was added to basement walls, and cellulose insulation was added inside the wall and roof-framing cavities. “We focused on making the home as airtight as possible and looked for areas we could repair or enhance,” O’Hara says.

The house is a simple rectangular shape with just a few projections. “We stripped it to its plywood walls, took off the eaves and wrapped the house in an air-tight membrane,” Mayor says. “It’s covered with rigid insulation, so it’s insulated from the outside, giving it a really tight, continuous shell.”

The result is an improved energy footprint. Thanks to the new insulation, the airtight home is no longer heated with its old baseboard-heating system. Heat pumps provide warmth during cooler months and air conditioning during the summer; a heat-recovery ventilation system brings fresh air into the home. Additional comfort is provided by radiant-heat floors in the home’s bathrooms and mudroom. 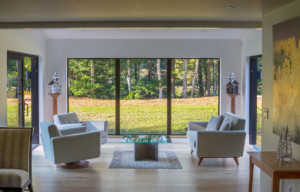 The living room, one of Dan Hedges’s favorite places to relax, has floor-to-ceiling windows that offer unimpeded views of the river and wildlife in the back yard. The chairs and loveseat are by Joybird in Brooklyn, New York.
Photography by Gary Hall

The house’s contemporary façade is made from durable, low-maintenance cement panels. The panels, each just over one-quarter-inch thick, come in large sheets; the construction crew cut the panels to fit on site. “It’s a very honest look,” Mayor says. “The cement looks like natural stone and really lends itself to the rural setting.” A black rainscreen system increases air and water flow underneath the cement cladding. Addi-tional energy efficiency is provided by triple-glazed windows, with un-plasticized PVC (UPVC) frames. The standing seam metal roof is made of Galvalume. A small rainwater garden collects water runoff from the roof, filtering it before it makes its way to the river.

Opening up the interior

To accommodate the couple’s desire for single-floor living, Mayor redesigned the existing living space, opening up the kitchen and taking eight feet from the garage to create a new dining room, mudroom and laundry area. Several walls were removed, creating a living room overlooking the river as well as a library and media room. White oak flooring unites the home’s sunny open layout, enhanced by banks of windows and double glass doors. The sleek kitchen features cabinetry by Cabico and South American granite countertops. The dark blue cabinets on the island hint at the couple’s Lone Star roots: cabinet pulls are embossed with Texas stars. The existing plumbing layout stayed intact in the new spaces, and modern, ultra-low flow fixtures were installed.

The master bedroom suite is on the first floor, as is a smaller bedroom. The home’s three bathrooms are finished with recycled porcelain tile that resembles marble, with hand-cut mosaic backsplashes. An unfinished attic stretches the entire length of the house, adding potential living space. There’s also additional living space and a kitchenette in the basement.

Dan planted a wildflower meadow along the front of the property. Filled with flowers and natural grasses, the meadow attracts numerous birds, deer and other wildlife living along the Connecticut River. This summer, Dan hosted a party for Dartmouth alumnae at the house. Although he intended to keep the party outdoors, ultimately everyone ventured inside to look around. “People really enjoyed it,” he says. “It’s a beautiful spot.” 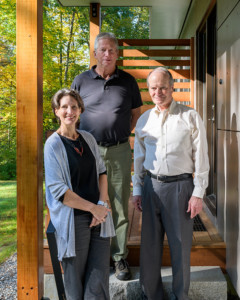