A Studio of One’s Own 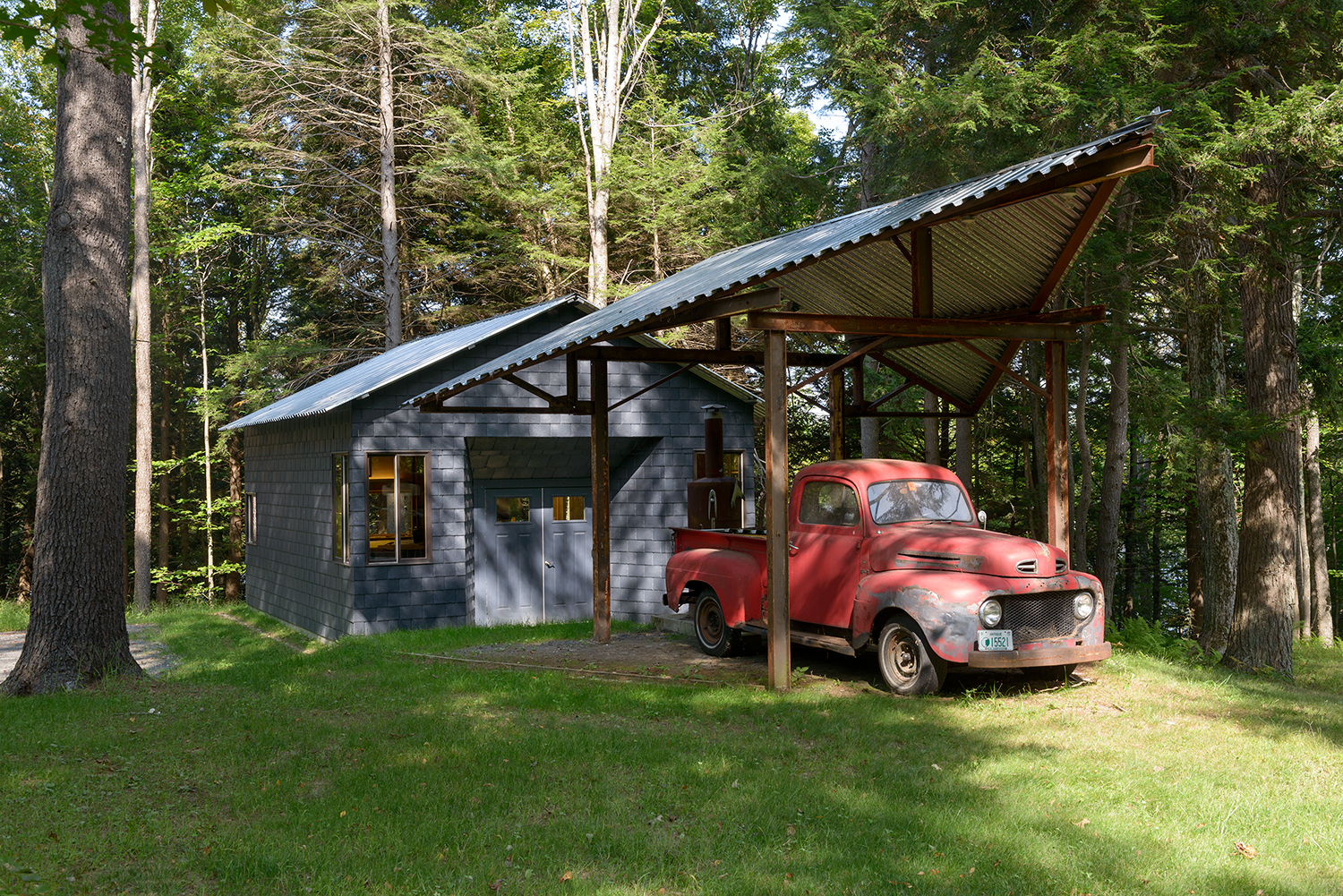 A dynamic roof over a 1950 Ford pickup truck announces Daniel Scully’s studio in the woods. Although he has always raced Volvos, the early Swedish rally cars that first caught his attention as a teenager in Greece had voluptuous fenders not unlike those on this Ford.

Daniel Scully’s writing lodge is the latest structure on the Dublin compound where the architect both resides and prepares his vintage Volvo racecars. This twenty-by-twenty-four-foot shed is no less personal than his Temple to the Gods of Speed (another building nearby). The garage—complete with its piston-columns formed with fifty-five-gallon oil drums and a Doric entablature with license plates in the frieze—complements his house with a kitchen shaped like the proboscis of a Pontiac Chieftain. It is also the latest jewel in what is arguably the richest collection of architectural landmarks in any New Hampshire town.

Given Scully’s love of the automobile, one might argue that he should have settled in Southern California. Yet, he deliberately chose to anchor his career in New Hampshire, where his fertile imagination found a hold in the rocky soil. Scully is at once the most eccentric and the most thoughtful of designers; this deceptively simple, yet intellectually complex outbuilding represents a distillation of decades of practice in the Monadnock Region.

The writing shed serves as a place for Scully, whose architectural practice is based in Keene, to work on his memoirs and catalogue the drawings, paintings and sketches that contributed to his unique American voice. It is a contemplative place for the ironic and polymathic Yale-trained artist. A steel entrance pavilion that serves as the platform for a piece of automotive sculpture contrarily introduces the utilitarian shed. 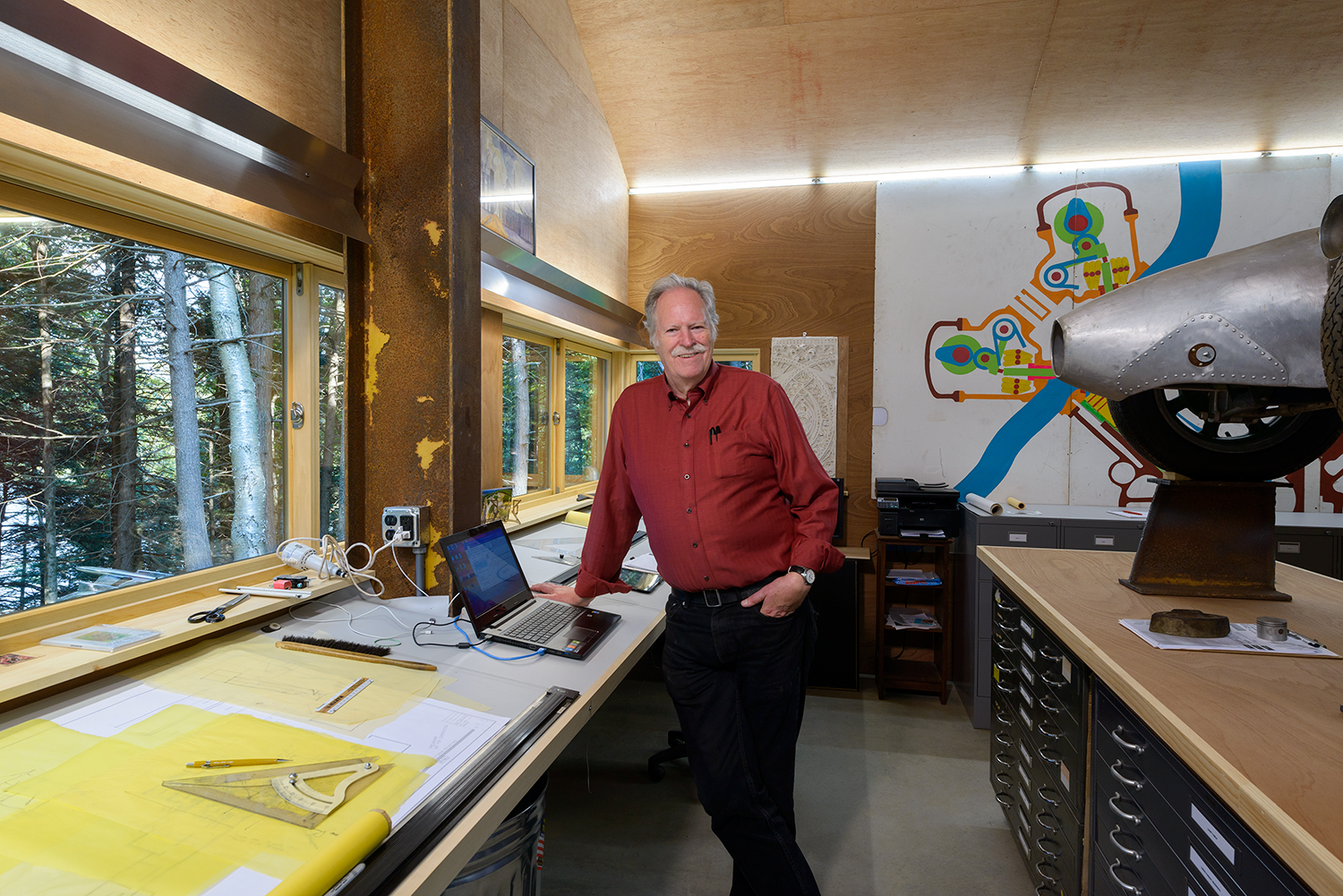 Architect Daniel Scully stands next to the studio-wide drafting table lit by a wall of windows that looks out on forest and pond. The industrial aesthetic of the exposed vertical I-beam is echoed by similar supports under the wheels of the car.

This studio is not just a cabin in the woods. It is more than a predictable tribute to Henry David Thoreau’s ten-by-fifteen-foot wee house at Walden Pond. The Dublin structure recalls some iconic writing shacks, like the poets Dylan Thomas’ boathouse in Laugharne, Wales, or Robinson Jeffers’ stone castle overlooking the sea in Carmel, California. It is closest in size and intention to mythic modern architect Le Corbusier’s cabanon overlooking the Mediterranean.

Scully’s essay harks back to an even older tradition. The seemingly humble cube is a respectful nod to the Rationalism of the Enlightenment. More Jean-Jacques Rousseau than Thoreau, the idea is an homage to the primitive hut—man’s earliest temple—and by extension, the very essence of architecture. Or, this shack can be understood as a garden folly, an eye-catcher that acts as punctuation in a pastoral poem. Such work of art is harder to design than, say, a tool shed. As in a lot of his work, Scully applies the original principle of the Picturesque: his building is less about its own intrinsic qualities than it is about our response to the associations it evokes.

What an architect builds for himself is most revealing of their inner thoughts and worldview (think Thomas Jefferson’s Monticello). As Howard Mansfield wrote in Free Rein, a portrait of the architect in the January/February 2014 issue of New Hampshire Home, Scully’s philosophy is a “romance with cars and roads.” His house is a combination of a Shingle-style summer cottage and an auto parts museum.

Scully’s work is informed by wit and historical knowledge. But it also defers to the Yankee aesthetic of utility and thrift. Much of this designer’s work may echo the movement of cars and trains, but this idyllic shack is more at rest. The almost vanilla-plain box of the writing studio is in contrast to the space frame entrance. This has the same height, profile, alignment and roof material, although its delta-wing roof creates a dynamism absent in the studio. Beneath this shelter is parked a 1950 Ford pickup that the architect bought for $25 almost half a century ago. The truck announces the building’s whimsical seriousness.

The uncluttered cubic quality of the archives’ exterior is part illusion—as at first glance, the walls appear to be constructed of stone but the material is actually plastic roof tiles manufactured to look like slate. The roof itself, however, is made of heavy-duty corrugated steel decking usually employed with concrete flooring. Despite the designer-patron’s obsession with vehicles that have a predestined rendezvous with rust, the building is about sustainability. The walls are sprayed with a super-insulated foam, and when photovoltaic collectors are added, the building will be net zero.

One enters the shed to confront a Formula 3 racing car suspended from the studio’s ridgepole. With its egg-shaped aluminum body, the 1957 Cooper hovers above the flat files that form the heart of the archive. Beneath a strip of windows that frame a view of forest and water—a sort of Nordic mural—there is a twenty-foot-long drafting table. Along the sides are extensive metal shelving and two worktables.

Like Le Corbusier’s own cabin, the interior finish is intentionally no-nonsense plywood. Above the vertical files on the east wall is an interpretation of a Maserati V8 engine, painted by Scully in 1968. On the opposite wall is a print of Giambattista Nolli’s 1748 Map of Rome, where the River Tiber, street system and intricate neighborhoods mirror the internal workings of the Maserati.

Given its myriad historical and practical layers, a Daniel Scully work of architecture requires interpretation on the part of the viewer. The archive does make reference to several threads of intellectual inquiry. But most of all, it reads as basic shelter, a cozy cabin to which an introspective artist can retreat. 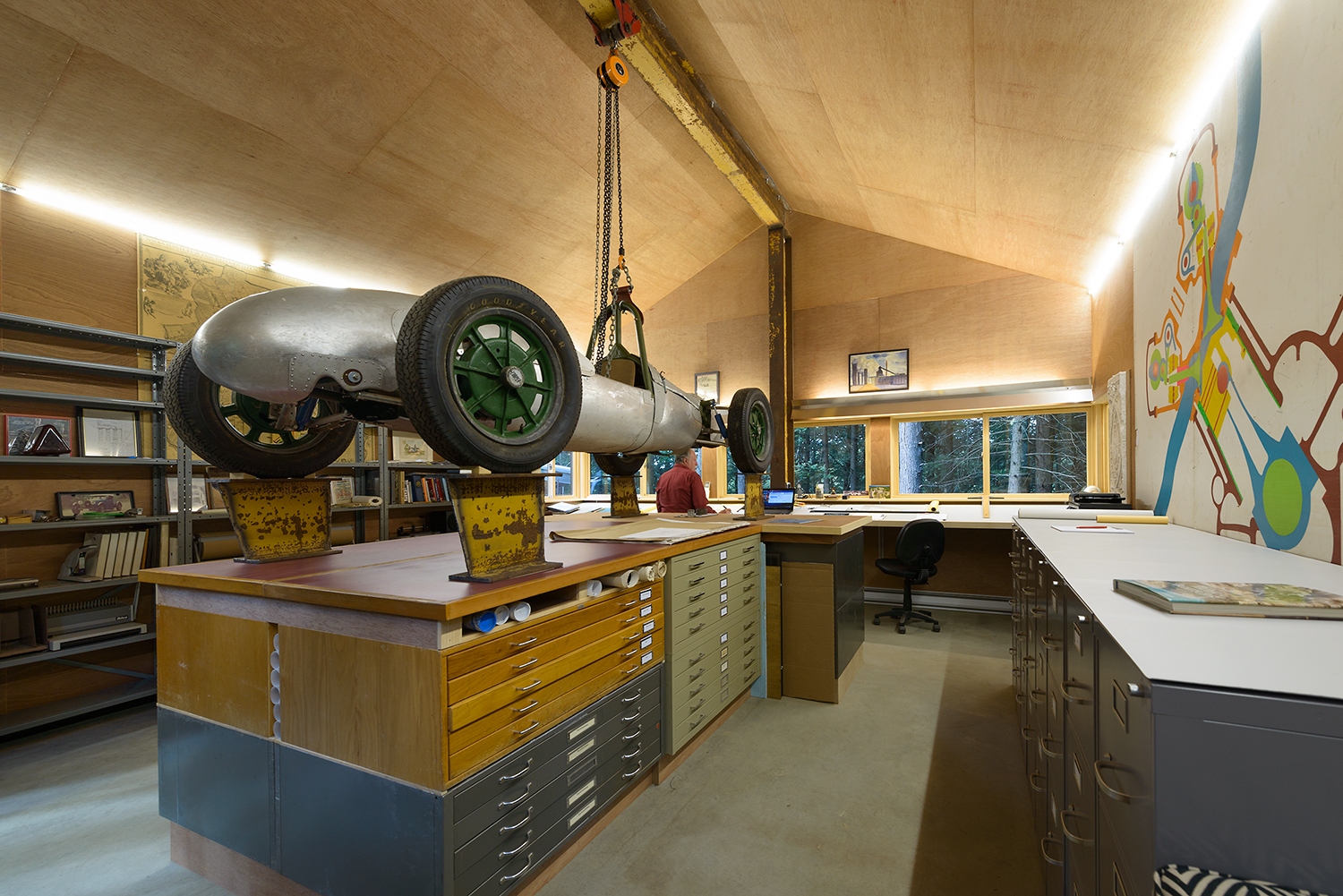 Despite the presence of the car, the studio is a serious work zone, complete with archival space for the record of a life’s work.
Categories: Architecture and Interiors