A Tiny House So Merry & Bright

A whimsical small home transforms into a cozy winter wonderland. 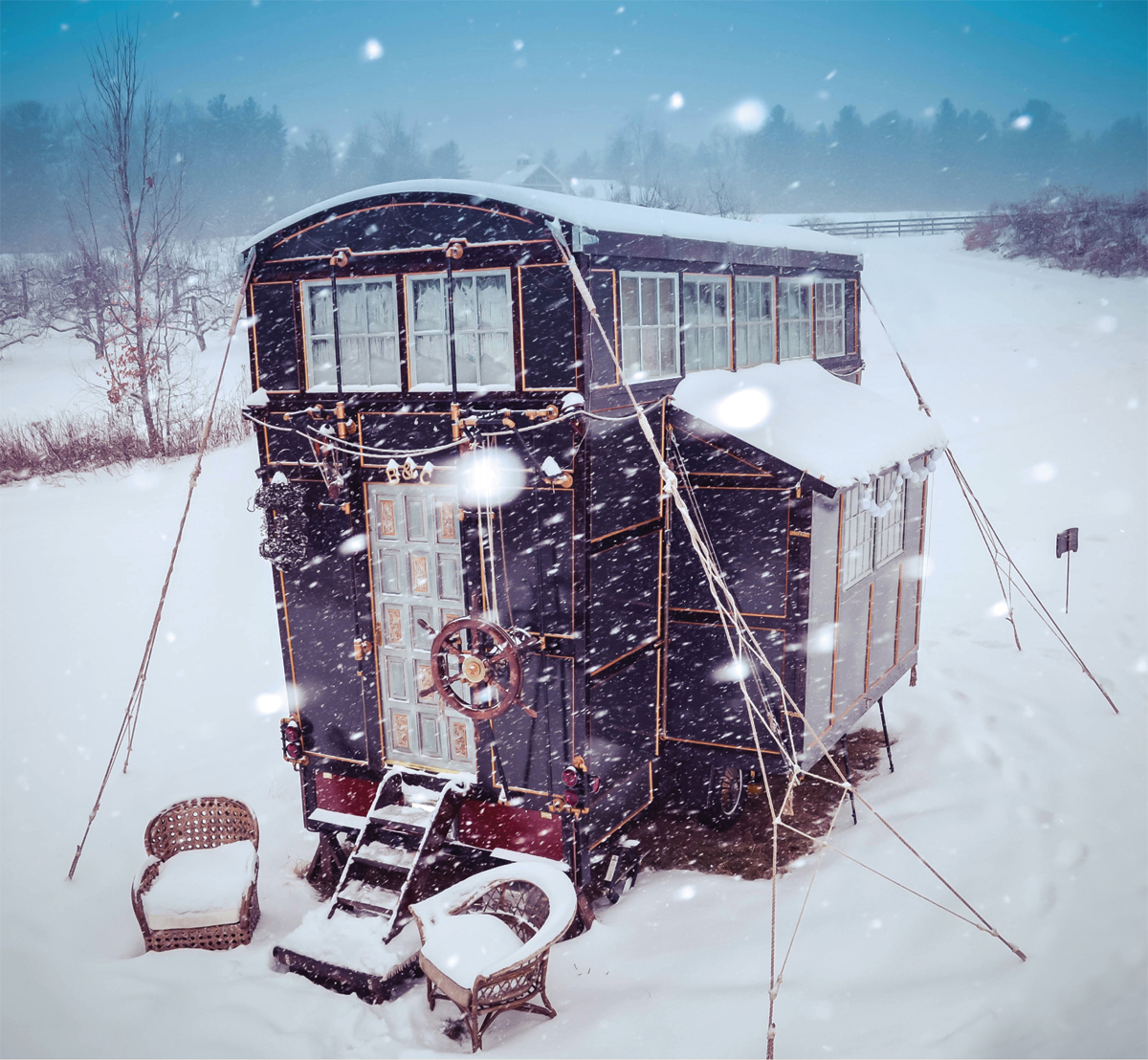 A one-of-a-kind dwelling built and decorated for less than $20,000. It’s a place where building materials were repurposed and someone else’s unwanted objects became their treasures. During the holidays, it’s the ultimate cozy retreat.

As the saying goes: good things come in small packages. For homeowners Chloe Barcelou and Brandon Batchelder, their expandable three-hundred-square-foot home on wheels is that and more: a tiny but comfortable abode that perfectly manifests and accommodates their free-spirited and creative passions.

The couple—who run B&C Productions, a set design company for film, theater and photography projects—began constructing their house in 2014. It was Barcelou’s idea to build it after seeing a Facebook post on the tiny-home movement. To her, it made “perfect sense.” She was attracted to the many advantages it would afford her and Batchelder: most particularly, the ability to travel more, easily relocate when professional opportunities beckoned and the overall cost-effectiveness. “We can live for one year on what people spend on one month of rent,” Barcelou says. “It also allows us to take jobs that are not necessarily the highest paying but the ones that we are most excited and passionate about.” Additionally, the freedom of creativity—the opportunity to turn their many ideas for the home, no matter how fantastical, into reality— was paramount.

Together, they have approached the home’s design with determination and enthusiasm, blending their respective professional and creative talents (Batchelder is a carpenter and set constructor; Barcelou is a stylist, art director and the newly appointed fashion editor of New Hampshire Magazine) to yield a most mesmerizing and playful house full of ingenious construction solutions and salvaged treasures from film sets, junkyards and flea markets. 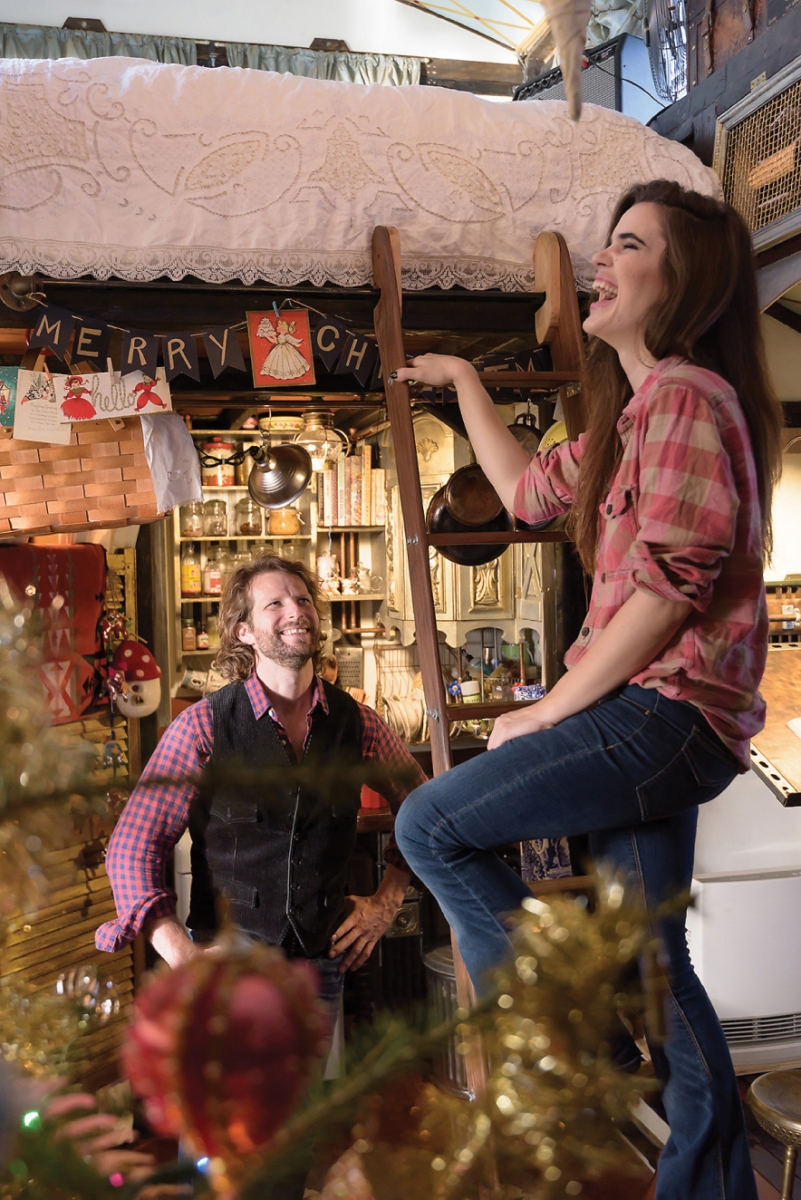 Tiny-house homeowners Brandon Batchelder and Chloe Barcelou are incredibly proud of their mobile and expandable home.

The home was designed, built and paid for by the couple—an accomplishment they both consider rewarding and satisfying. “It’s made almost entirely of recycled materials, many of which were salvaged from film sets,” Barcelou says. “The timber frame is made from a large pile of two-inch-by-four-inch wood that was deconstructed from the set of the first film Brandon and I worked on.”

The building’s design is just as unique and personal. Inspired by a variety of architectural styles and heirloom objects, Barcelou was initially drawn to Tudor-style homes; however, a steep pitched roof would result in lost space above. To accommodate, Batchelder designed a gently rounded roof, reminiscent of steamer trunks. Other sources of inspiration included gypsy caravans, rail cars and wooden ships.

A ship’s wheel on the front exterior best expresses their nomadic fascinations. However, it is not placed as a mere decorative charm but rather as a vital technical feature that manages a series of pulleys that hoists the building’s ceiling when the home is parked. This extra height provides for an upper-level living space lined with windows and includes a bedroom loft and a daybed/guest bedroom. The lower level also expands, nearly twice its size, with collapsible offices on either side of the building. The offices are ten-feet wide and a little less than four-feet deep, allowing the couple to have their own work spaces outfitted with cozy arm chairs, repurposed and handmade desks, exposed closets and additional storage. Barcelou loves keeping her clothes in vintage luggage cases, which provide stylish functionality and further enhance the home’s whimsical vibe.

The kitchen has a Magic Chef stove purchased from Craigslist for $150 and cabinetry made from salvaged pieces of furniture color washed with Benjamin Moore and Modern Masters paints. Nearby are the home- owners’ separate and highly personalized workspaces—Chloe Barcelou’s on the bottom right and Brandon Batchelder’s on the left. The ceiling’s lattice design was inspired by a space featured in Architectural Digest. Batchelder traced all the lines and Barcelou hand-painted over them twice. “In the right light, it looks 3D”, says Barcelou.

The interior has all the essential living spaces and more: a kitchen, a bathroom with a composting toilet, and a metal-clad shower made entirely of junkyard scraps that were striped, cut, riveted and sealed. Its portal window is a crockpot lid.

Most surprising is the tiny house within this tiny house. That is, the custom-built rabbit hutch for the couple’s beloved pet bunny, Cosmos. This space keeps his litter and food out of sight, and gives him his own area to play and relax in. “We love watching him use it,” Barcelou says. “It is also one of my favorite solutions for tiny living.”

The homeowners do not let downsizing hinder their love of objects. Their space is densely decorated with an array of keepsakes, books, striking vignettes and ingeniously repurposed pieces of décor. They love how resourceful and frugal they have been, finding potential in the discarded.

“There is definitely a story about every single object in our house,” Barcelou says.

Kitchen shelving and cabinetry were made from salvaged bookshelves and side tables. A flower garland in Barcelou’s office is made from spray-painted coffee filters. A flower chandelier now wrapped with fairy lights was found buried in a rusty, old bathtub in a junkyard and purchased for $5. In addition, vintage fabrics found at flea markets and thrift stores have been reused and crafted as curtains, slip covers and other soft furnishings.

The couple celebrated their first Christmas in the tiny house last year. “It was really magical,” Barcelou says. “We were parked on a farm in New Hampshire that grows Christmas trees. We dug one up—sort of borrowing it for the season—potted it in a tin pail and decorated it with lights, gold tinsel, glittery feathers and ornaments.” After the holidays, the couple replanted the tree; they will use it again this year, establishing what Barcelou calls “a cool tradition.”

Like the interior’s more permanent decorative features, the seasonal decor is just as unique, and mostly handmade or thrifted. Barcelou says she used a lot of materials that were recycled from previous holidays, or props from films and photo shoots. She made a Christmas pendant out of vintage greeting cards and “rescued” a frosted mini evergreen from Starbucks. “I used to work there as a barista,” Barcelou says, “and the store was going to throw this decoration away at the end of the season, so I saved it.” It adds the perfect wintery touch to the loft area, complementing the greenery of the Christmas tree below.

As the new year approaches, the couple is considering several new additions, including a foldable pergola/three-season deck with a wood stove. They also hope to install conduit electrical wiring. “The house is and will most likely always be a work in progress,” Barcelou says. A possible New Year’s resolution: to keep having fun. Oh, the vast and monumental directions this tiny house can and will go!

The homeowners get into the Christmas spirit with their pet rabbit, Cosmos.
The homeowners can’t wait to celebrate Christmas in their tiny home this year, revisiting traditions established last year and crafting new ones this year. 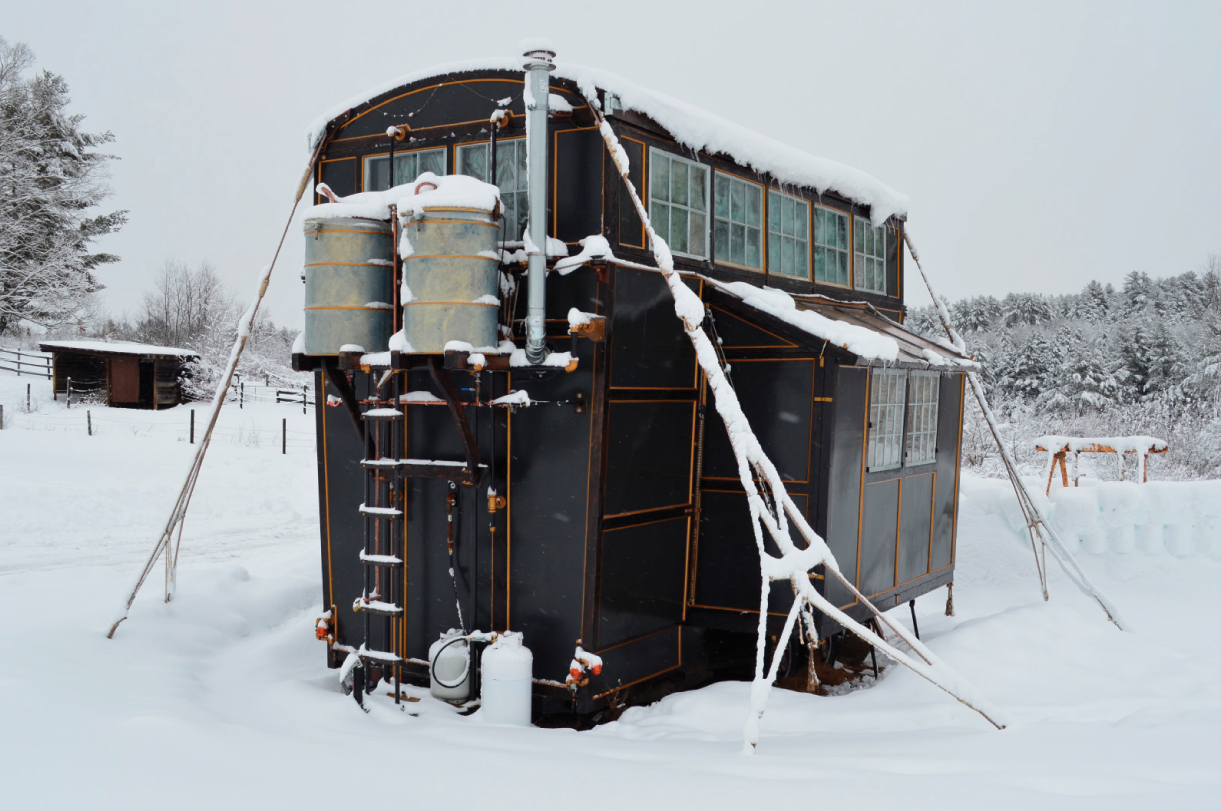 Brandon Batchelder designed and installed a barrel plumbing system on the home’s back exterior. The couple are working toward a completely off-the-grid-system.
Categories: Architecture and Interiors, Notable Homes & Homeowners