A Unique Collaboration of Furniture

Those who attend the New Hampshire Furniture Masters Association (NHFMA) auction each year know they will see unique objects crafted with care and artistry. Among the many special pieces produced by NHFMA members for this year's event is an eye-catching standout-a cabinet from Vermont furniture maker Garrett Hack that's painted by his wife Carolyn Enz Hack.

The graceful four-doored piece, titled Va Va Vienna, stands about as high as a person. It features the satiny woods, clean lines and meticulous inlays that Garrett is known for, but also Viennese styling.

"I was inspired by the turn-of-the-last-century makers," Garrett says, "dark woods, silver details, mother of pearl and other exotic inlays or veneers."

What also makes the cabinet stand out is the flowing, organic design on its front, painted in greens, purples, blues and golds by Carolyn.

Although the two artists have worked together before, Va Va Vienna represents the first time they have collaborated on such a major project. The cabinet had its beginnings in a trip to Austria, which the couple visited recently while Garrett was teaching workshops in Germany. Garrett and Carolyn were both excited by the works of Austrian artists such as Egon Schiele and Gustav Klimt, and Garrett was intrigued by the furniture.

The couple decided to try a "more complex interplay," in Garrett's words, of their respective, unique skills. Although the painting on the cabi­net doesn't look like that of any other specific artist, it has some of the "rich­ness," as Carolyn puts it, of Klimt. The organic leaf- and vine-like images and general undulating lines reference the Jugenstil Art Nouveau style that is specific to Vienna around the turn of the century. 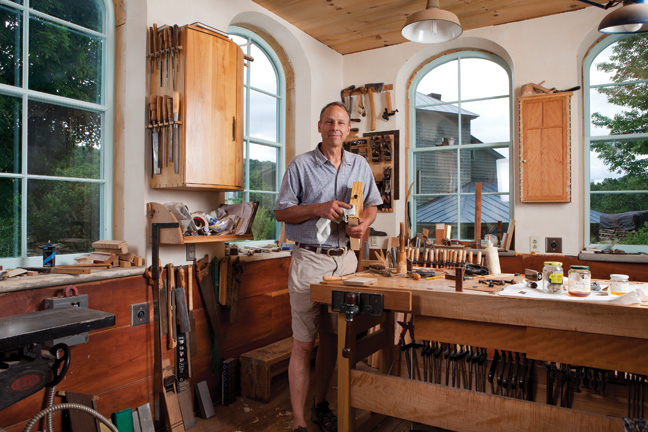 Garrett Hack’s many-windowed studio stands a short distance from his house on a farm in Vermont.

This cabinet represents a design direc­tion that Garrett-whose work is described on his website as "contem­porary interpretations of Federal and other classic American styles"-has been pursuing recently. The body of the piece is rounded, like half a barrel. In fact, Garrett used "coopered" con­struction, fitting cherry boards together so carefully there was no need for nails or screws. The four doors that form the front of the cabinet are slightly curved, and covered in Macassar ebony. Toward the top is a band of rare and precious satinwood. The cabinet's four legs are slightly flared, the front two more so, and these are sheathed in silver, a detail Garrett has included in a couple of other recent pieces. One of his sig­nature motifs is inlaid detailing, in par­ticular a band of alternating black and white (ebony and holly) rectangles. He used a form of this design along the top edge of Va Va Vienna, but this time in ebony and mother of pearl. The cabi­net's four knobs are made of bone, with ebony centers or "dots."

One of the challenges of the proj­ect, Garrett says, was "making sure the four doors became one" in the curved construction of the front. This they do, and Carolyn's design on the four doors also helps integrate the piece. Even the knobs are strategically, asymmetri­cally placed within the artwork so they harmonize rather than add rigidity to the whole.

Another challenge, which is on-going in Garrett's work, is the efficient use of materials and construction techniques. "I strive for elements to do multiple duty," he says. "The shelves are shelves but also become ribs for the curved shape of the case, and they join the legs." United, he continues, these ele­ments create lightness and strength.

The top two doors of the cabinet open to reveal a painted "half shelf" toward the top of the interior, and stor­age spaces that Garrett suggests might serve for a bar or a tea setting. The bottom two doors open to reveal more shelves and two satinwood drawers with ebony knobs. 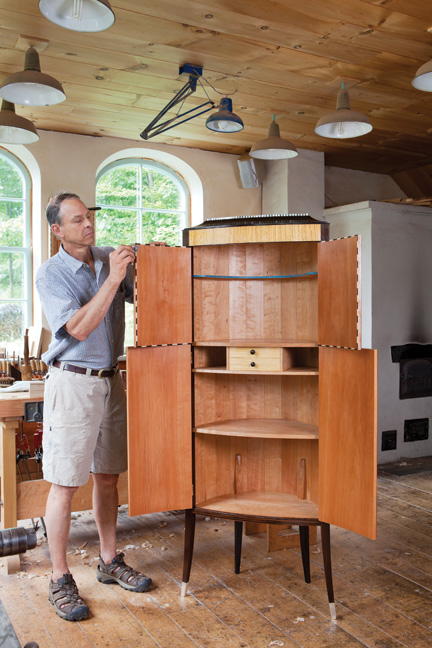 The cabinet’s four doors open to show its coopered construction (no nails or screws were used in the body), shelves and drawers.

Bringing in the second artist

With regard to the painting, Carolyn had some initial concerns. "Garrett sug­gested that I paint the surface, and I was very hesitant, knowing how exacting he is with his work and also that it might be hard to mesh our design senses," she says. "While Garrett has detailed plans before he builds, I work in a very intui­tive way."

There was the possibility that too much planning and discussion could eliminate the mystique necessary to Carolyn's creative process. However, the artists managed to arrive at a happy medium between formulation and inspiration. There were some initial iter­ations-at one point Carolyn created a canvas the same size and with the same faux finish as the cabinet, and painted atop it to get a feel for how the finished product would look.

When it came time to paint on the actual cabinet, she thought about using overlays but instead went freehand. She chose colors to "float" over the ebony, and used dark blues and purples toward the outside of the case to enhance the curves. "The use of those flowing lines came from a sense that the piece needed that movement as a contrast to the strong vertical thrust of the cabi­net," Carolyn says.

This cabinet was built in a studio on a farm in Thetford that Garrett has occu­pied for thirty-two years. He and Carolyn share this setting, which includes a house, woods, fields, a Belgian draft horse named Jazz and three milking shorthorn cattle. Around 1993, Garrett began building his studio (also Federally inspired) from bricks salvaged from a bank building in Hardwick, Vermont. "There were ten thousand bricks," he says, "and it took a year to clean them." (Garrett did this himself with a brick hammer. Looking on the bright side, he claims that the ordeal "taught him the Zen of bricks.") Then, with some help from a mason, he built the result­ing high-ceilinged structure. All of the wood, with the exception of the rafters, came from the Hacks' land. The granite and slate were salvaged.

In addition to being a master furni­ture maker and teacher who has been in the business for more than a third of a century, Garrett is a builder who logs most of his own wood-with help from Jazz. He is also a writer, having authored the definitive works The Handplane Book and Classic Hand Tools. And he is a regular contributor to publications that include Fine Woodworking.

Carolyn also was involved in build­ing the farmstead, including creating the house, farm and garden. She is an established artist who works in a vari­ety of media. Her upcoming show, Evil Divided by Good, at the Spotlight Gallery in Montpelier, Vermont, features sculp­tural paintings based on the idea that good works can overcome evil.

In all, the cabinet project took about seven months from design to comple­tion, says Garrett, who was still putting the finishing touches on the piece when interviewed in June. The result is rich, exuberant and also useful: definitely a case of Viennese opulence meeting Vermont utility.

"It was really fun to do this together," Carolyn says. Garrett agrees: "Naturally, working with someone else has its chal­lenges-and maybe working with your wife, unique ones-but there was little of that here. It seemed very natural, and it was certainly fun. Judging from the reaction [to the piece] thus far, this could be a wonderful leap for both of us."