A View Runs Through It 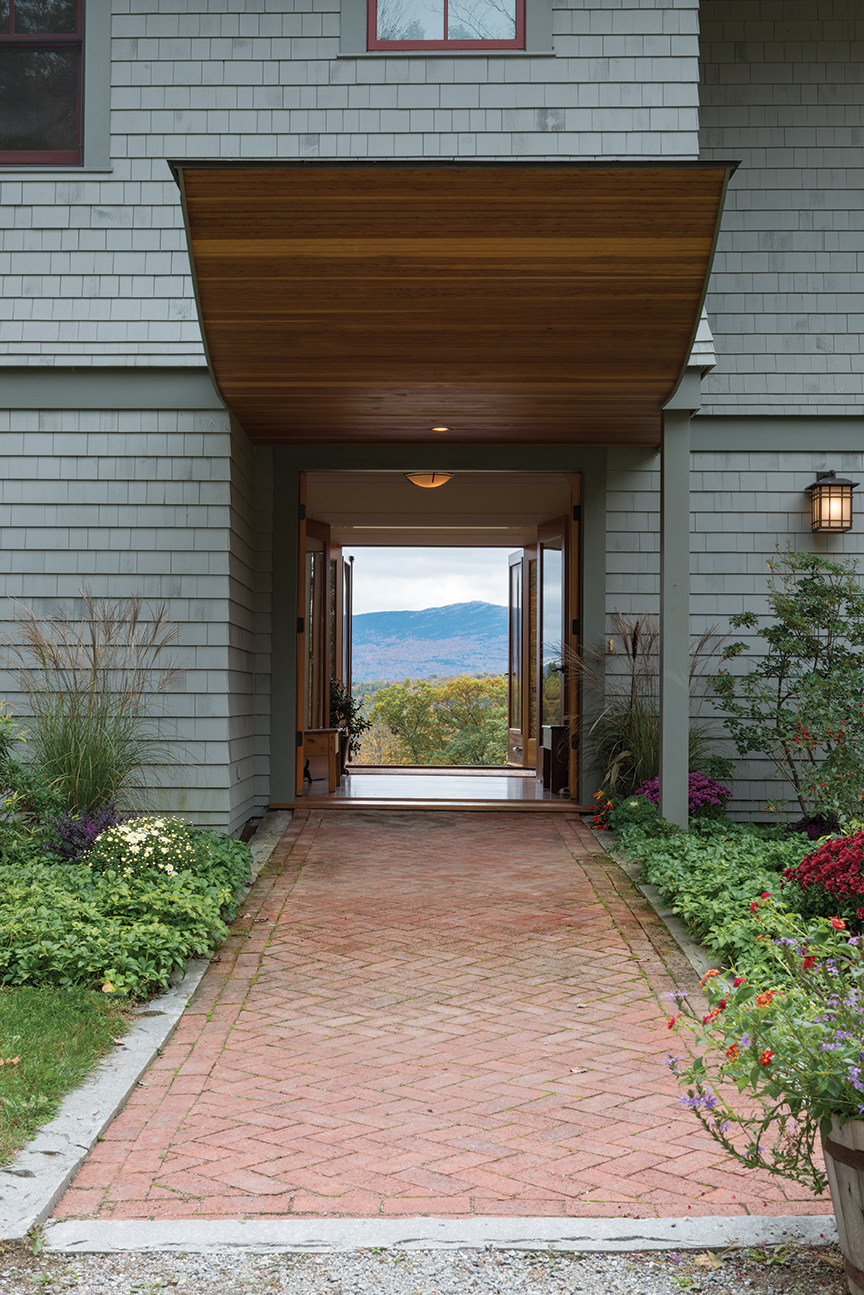 Mount Monadnock beckons visitors straight through a strategically situated home in Harrisville. At right, Katie Sutherland and Dan Scully of Daniel V. Scully/Architects in Keene designed the house, including the wooden canopy at the entry that helps focus a visitor’s eye on the view.

When arriving at this Harrisville home, it’s easy to see the inspiration for the property: Mount Monadnock. Architect Dan Scully, of Daniel V. Scully/Architects in Keene, designed the house to frame the homeowners’ remarkable view of the area’s iconic peak.

Scully and Project Manager Katie Sutherland, associate architect, achieved the homeowners’ goal of capitalizing on the view by designing front doors with vertical windows that provide a line of sight into the house and out through the French doors on the back side. There, a rough-cut granite bench sits at the crest of the hill overlooking a reservoir and the mountain.

When the front and back doors are open, nothing separates the homeowners from Monadnock. In essence, they and their guests have been led through the frame from the driveway into the house and back outside again to where you are actually in the framed picture.

The clients—who are from the Boston area—already owned the seventeen-acre property when they contacted Scully about designing a new house that would provide a relaxed get-
away. They wanted a comfortable, family-friendly house
that took advantage of its setting, and the existing home just wasn’t meeting the needs of the family’s three generations who often visit.

The homeowners had a couple of key ideas for their new house: that every room have a view of the mountain, and that the building have an open and airy feel, without being “open concept.” To meet these criteria, Scully designed a house that is long and narrow—sort of a larger, perpendicular equivalent to a railroad apartment—and only one room deep for the most part. This way, each room (some with windows on three sides) has a great view of the mountain. In addition, some rooms have views of Silver Lake to the north and the gardens.

The overall exterior design of the house, covered in gray stained cedar shingles, is long and low to the ground. The red roof gives a nod to Tuscan villas and to the Italianate architecture of Charles Platt in Cornish of several generations ago.

It’s a design that is—in the words of the jurors for the American Institute of Architects New Hampshire chapter, who gave the house a merit award in 2008—“thoughtful and modest. Clearly a New England language, but there is a modern force to it.”

In keeping with the modest design, the house isn’t placed in the landscape simply to afford the best view of Monadnock, but to harmonize with the immediate surroundings. “I like to think the house has a relaxed relationship with the view,” Scully says.

Construction took place between 2006 and 2007. The new house was erected more or less on the same spot as its predecessor, with one exception: “We were very careful about the orientation of the foundation,” says Scully, adding that it had to be shifted early on in order to enable an optimal view of the mountain. This proved to be one of the main challenges of a project that was otherwise fairly straightforward, according to builder Jeff Trudelle of T&H Contractors of Harrisville. Trudelle had worked with Scully before to build cottages and another house with a view. The Harrisville home was his biggest Scully project to date. “I always have fun working with Dan because he has grand ideas,” Trudelle says.

Inside, the first-floor rooms open to each other, making it possible to look from the window seat in the kitchen at one end of the house to the window seat in the library at the other. In the kitchen and the library, Scully used pocket doors that slide inconspicuously into casings, so the spaces can be closed off from the other rooms when necessary for privacy and noise reduction.

The house is bright and airy, thanks to the large windows that start very close to the floor; it’s as if you could step through them. The homeowners eschewed window treatments in order to let the view speak for itself. (The setting is private.) In the dining room, three stained-glass windows—made at nearby Pear Tree Studio in Harrisville—provide a bit of color inside and out.

The main floor has a kitchen, dining room, living room and a library that can double as a play area. All the floors on this level feature American cherry.

The kitchen is spacious, with a small dining area next to the window facing Monadnock as well as a built-in window seat and sofa for reading or chatting with the cook. The countertops are polished cherry, and there are more drawers than cabinets, due to the homeowners’ preference. A pantry to one side can be opened up or closed off as desired.

Next to the kitchen is a bathroom and then the dining room, framed by pillars at either end. The dining room opens via French doors to a semicircular brick patio in back, which is shielded from the sun by an overhang (the second floor of the house) and also by a wisteria arbor. 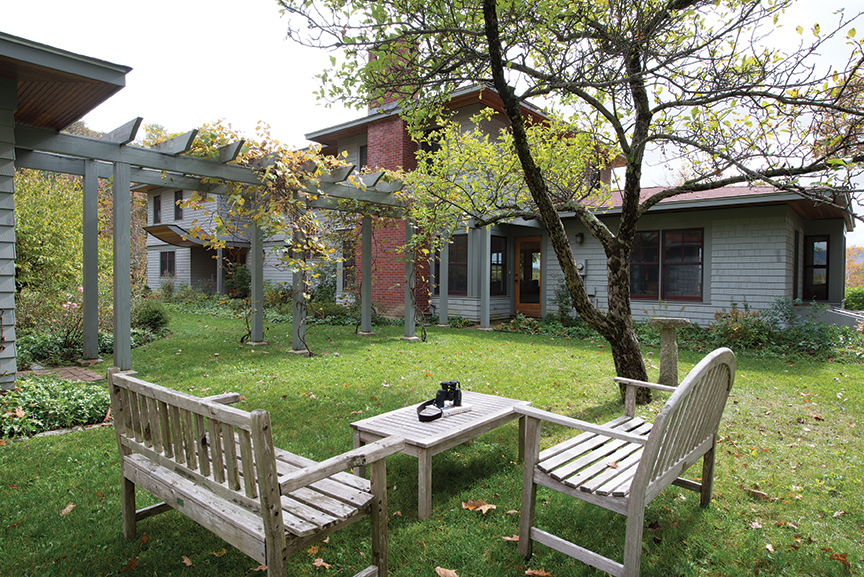 The grassy landscape surrounding the house affords wonderful opportunities for sitting and relaxing.

Next is a formal living room with window seats (that are also wood bins) on either side of a fireplace. The room opens to the front and the back patio through French doors, and is also the “see-through” portion of the house. The living room’s fireplace is modeled on the exact dimensions of the fireplace in the earlier house, which drew extremely well. Custom cabinetry on either side of the fireplace and throughout the house was created by cabinetmaker Curtis Mead of Westmoreland. At the far end of the house is a maroon-walled library with a fussball table at one end. The library has a built-in window seat with large, low drawers that make toy cleanup easy when little ones are in residence.

Upstairs, there are four bedrooms, including the master, which probably has the best view in a house full of great views. A study attaches to the master bedroom, again using pocket doors for separation when needed. One of the more charming features of the house is a balcony off the back of the master study that is extensively used for writing, reading or gazing at nature. The second floor features maple floors and a laundry room that can double as a sleeping area for a visiting baby.

In keeping with the house’s family-friendly aspect, the basement has a play area with a pool table, ping-pong table, dartboard, and four square and hopscotch outlines on the floor. An open
expanse of wall provides a handy screen for
projected movies.

One of the homeowners is an accomplished gardener, and the property abounds with plantings, some as humble as pachysandra and others as exotic as two large weeping hemlocks, which mirror the mountain and frame the yard. There are also rhododendrons, mountain laurel, mountain andromeda, beauty bush, gold mound spirea, royal azalea, daffodils in spring, daylilies in summer, and a large vegetable and cutting garden. Trees include giant oaks, birches, crab apples, a Korean mountain ash and a Cornelian cherry, along with fruit trees, such as apple, pear, plum and peach. Other than the patio, there isn’t a great deal of hardscaping;
grass acts as the walkway around the grounds and through the gardens.

The house’s most unusual feature could be the large, curved wooden canopy over the front door. “The canopy is shaped in such a way that it leads your eye into and through the building,” Scully says. Also leading up to the house is a rectangular brick walkway bordered in granite that reinforces the visual focus. The walkway’s bricks are laid in a diagonal pattern that gently reflects the angles of the mountain.

Of course, you can enjoy the view from the backyard bench. It’s centered on the sight line through the house to the mountain, with a grass walkway showing the way. The bench sits at the crest of the hill overlooking a reservoir and Mount Monadnock. The rectangular shape of the bench alludes to the rectangular view through the house.

Seated on the bench with your back to the house, you can imagine it’s just you and the mountain, in nature. Then, when you’re ready, all you have to do is turn around to return to the comforts of home.