What used to be a farm in Dublin now includes lush gardens, a Slovenian bee house and a former barn that’s on the National Register of Historic Places. 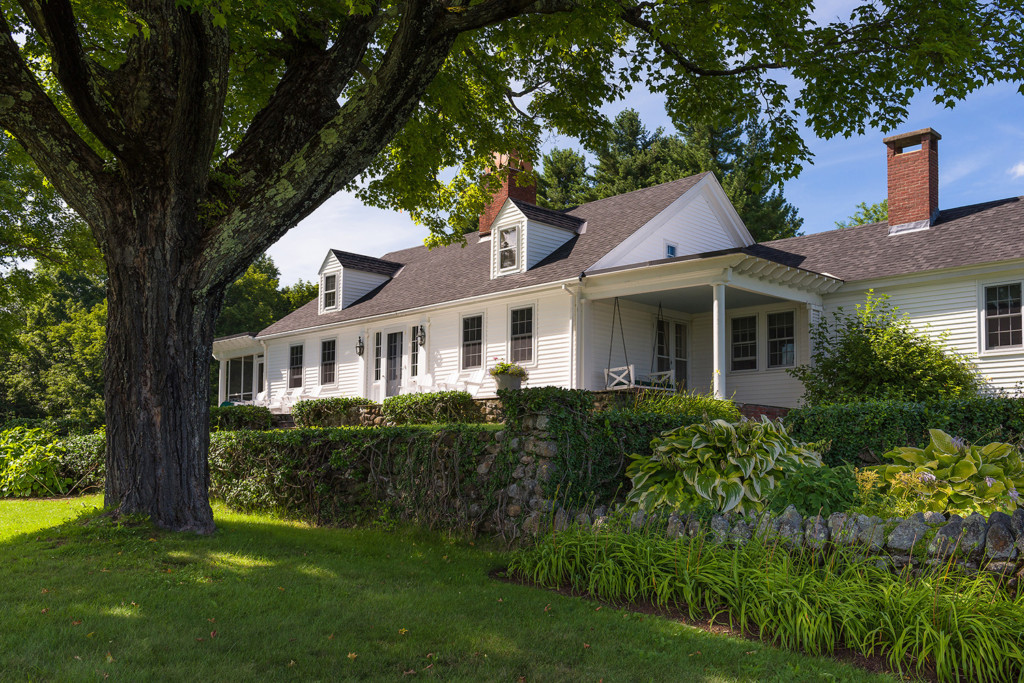 Hostas and day lilies thrive in the dappled shade of the old maple trees in front of the Robertsons’ house.

When the Dublin property known as Robinwood came up for sale in 1983, it was featured in Yankee magazine. Owned by just a few families since the 1790s, Robinwood had evolved over the years from a hardworking sheep farm to part of the 1920s Dublin art colony to a summer home.

Russell Robertson—a Connecticut ear, nose and throat surgeon who subscribed to Yankee for his office waiting room—read the article and admired the property. At the time, he and his wife Prue were looking for a place in New England. “We did a lot of skiing in Vermont and wanted a winter getaway,” Prue says. After much searching and discussion, they finally agreed to buy land in Chester, Vermont, and design their own house. The next year, as they were meeting with an architect friend to finalize plans, the architect mentioned that a relative had a place in New Hampshire for sale. They drove to Dublin to look around and were surprised to find it was the house from the Yankee article. “We put in a bid on Tuesday, and it was accepted on Thursday,” Russ says. “Yankee magazine has a lot to do with us landing here.”

A visit to Robinwood

Mature trees line the long driveway, creating a feeling of formal passage as you emerge from the deep shade to a farmstead surrounded by bright open meadows and gardens. The house—a classic full Cape with center chimney, dormers, porches and two ells—is located in the middle of the original 150-acre piece the Robertson’s purchased in 1984. They have since added another 15 acres of adjoining land. The 180-degree view from the house over the fields is of the Wapack Range, including Pack Monadnock and Temple Mountain to the south and east.

Lush gardens embrace the house with lilacs on the west corner. A curved bed of lilies with blue salvia, pink peonies, blue Canterbury bells, veronicastrum, variegated sedum, knautia and spirea, to name just a few, wraps around to the vine-covered, stone retaining wall on the south side. In front of the screened porch, there are globe thistles, daisies, phlox, tithonia, alliums and fritillaria; in May, the field to the east blossoms brightly with fourteen thousand daffodils. A fragrant, old-fashioned rose grows next to the brick steps leading from the house to the front lawn where two huge maples stand sentinel at the corners of the terrace. 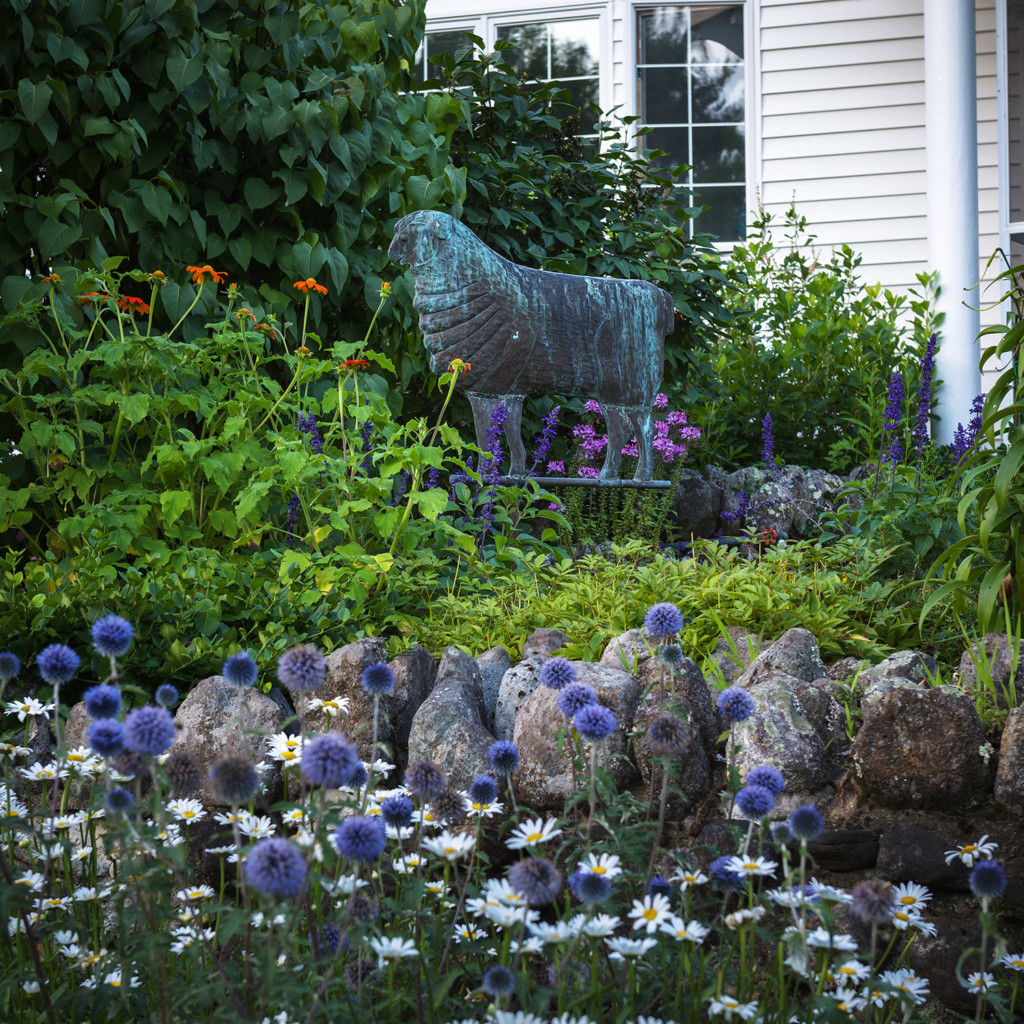 The Robertsons found the sheep weathervane in an antiques shop in the Berkshires and placed it in the side garden as an homage to the homestead’s origin as a sheep farm.

Russ has planted many specimen trees to add color and interest to the property—red maples for fall; crab-apples, horse chestnut, seven-sons tree, variegated Japanese red pine, native Nyssa sylvatica, kousa dogwoods, Harry Lauder’s walking stick and several Japanese maples. One of his favorites is the Tennessee yellowwood whose base he has had to wrap with wire to deter porcupines who love to chew the tasty bark.

Across the driveway from the house is the studio—a converted sheep barn that was placed on the National Register of Historic Places in 1983. Part of the original 1790 Fisk farm, it was moved closer to the house in 1929 and converted into a studio.

Back then, Louis Gerry had purchased the farm in 1924 and was in the process of gentrifying it. He hired Providence, Rhode Island, architect Albert Harkness, who replaced the sliding barn doors with two 2-story windows of sixty panes each, and put in smaller circular windows under the eaves on the long front and back walls. Inside an oak floor was added for dances, the barn boards on the walls and ceiling were white-washed and a huge fieldstone fireplace flanked with bookcases was built.

Gerry hosted concerts, lectures, painting parties and other social events for his Dublin friends here. “There was a little stage for the musicians,” Prue says. “And we still have the wooden chairs they would set up for concerts.”

Today, a vintage gazebo sits to one side of the studio, and Russ has planted the front of the studio with some of his favorite trees and perennials. Red roses and white peonies blossom freely here, and there is a variegated yellow kousa dogwood ‘Summer Gold’, an early blooming redbud and handsome stewartia that offer year-round interest. A huge climbing hydrangea scrambles up the shed that is attached to the studio. The Robertsons often use the studio for family get-togethers and other functions. Last summer, they hosted the Hoop-Dee-Doo Harvest Dinner and Auction, a fundraiser for the Cornucopia Project, a nonprofit dedicated to teaching children and adults about organic gardening through its school and community-based programs.

The rear door of the studio opens out to the back gardens and dairy barn. “It was a full working farm,” Prue says. “The Gerrys wanted cream and meat during the war.” Their daughter later converted the dairy barn and raised horses there until 1982. The area where abundant gardens grow today was once a hard, compacted equestrian ring.

After a visit to England in 1986, where the Robertsons saw some beautiful gardens, the couple were inspired to create a geometric design for the area behind the studio. They wasted no time. “On the flight home, we asked for ten napkins and a pen,” Russ says, “and the plan evolved at forty thousand feet.”

The design is not intentionally a Union Jack, but when viewed from above, it has a similar look with the main pathways intersected by diagonal paths to form triangular beds. These are filled with perennials, including tall purple asters, thalictrum ‘Black Stockings’, buddleia, blue balloon flower, mallows, coneflowers, red monarda, pink astilbe and chelone. Purple angelica flowers are a magnet for bees, annual pink cosmos tower over Verbena bonariensis and white phlox, and the silvery-blue leaves of the peanut butter plant (Melianthus major) smell divine when rubbed. Square and rectangular beds at the back of the garden are planted with peonies, castor beans, phlox, rudbeckias, hydrangeas, nicotiana and more. Anchoring the garden at the far end, a long pergola covered with grapevines, wisteria and climbing hydrangea also provides support for annual vines, including cobea, hyacinth bean and morning glories. 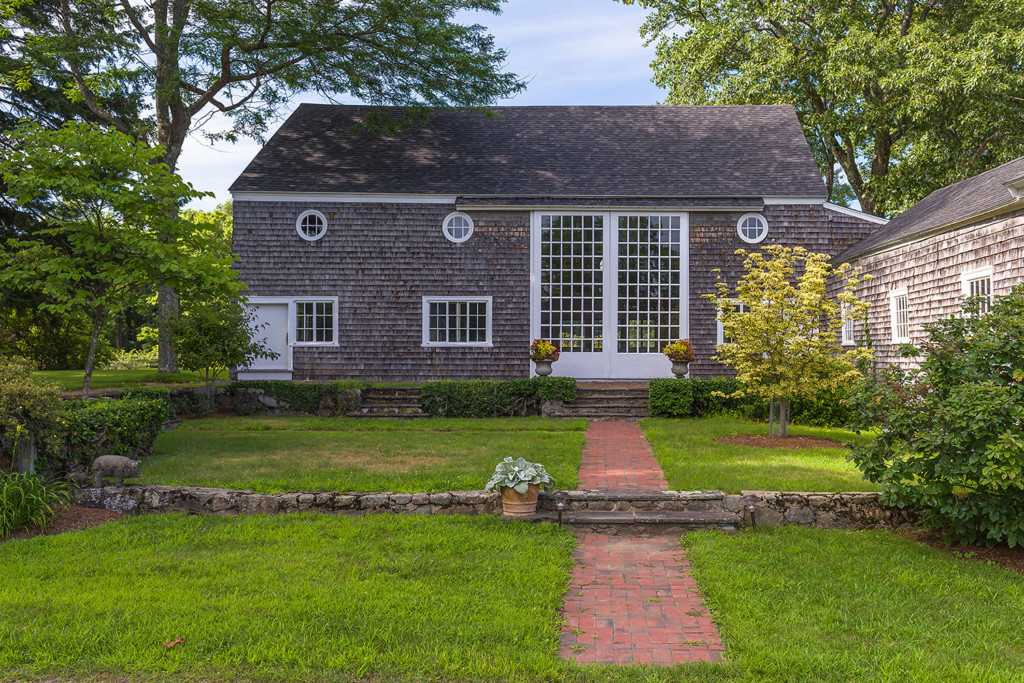 Due to its unique conversion from eighteenth-century sheep barn to an art studio in the 1920s by noted architect Albert Harkness and its importance to the Dublin Art Colony, the Fisk barn was accepted for inclusion on the National Register of Historic Places.

To one side, there is a fenced-in vegetable garden with raspberries growing at the edge. Raised beds full of cherry tomatoes, red cabbage, squash, carrots, onions, broccoli, peppers and pole beans provide fresh summer fare for the kitchen. Tall sunflowers, zinnias and lisianthus are grown for cutting, and a row of blueberries and many fruit trees are planted outside the fence.

Rather than typical beehives, in one of the fields, Russ had a Slovenian bee house built. Six years ago, the Robert-sons went on a hiking vacation in Slovenia with two other couples. They fell in love with the country and its people. “It is in the southern part of the Alps, the people are so welcoming and friendly, and there are beehives everywhere,” Prue says.

“In fact,” says Russ, “they have the most beehives per capita of any country in the world!”

But these are not like the stacked box beehives we have in this country. Instead an entire building is devoted to the bees. Inside, the frames—which can be quite heavy when full of honey—are placed on their sides in the hives, which are built into the wall. This way, they can be easily removed for inspection of the bee colony and harvesting of honey. Each hive has its own cupboard, complete with door; on the outside, the front of each hive is painted with Slovenian folk scenes. The house offers extra protection from the elements and predators.

Russ had always been interested in beekeeping, and this experience prompted him to look into it more. In doing so, he found that just up the road there is a woman who specializes in Slovenian hives. Suzanne Brouillette, of Slovenian Beekeeping in Harrisville, imports authentic hives from a family-run factory in Slovenia, and has all the supplies and plans necessary for building Slovenian bee houses. She also takes groups on beekeeping tours of that country.

“Slovenia is smaller than New Hampshire, but it has ten thousand beekeepers compared to about two thousand in New Hampshire,” Russ says. “Beekeeping is a large part of their culture. They teach it in the schools and have clubs for the children.”

The Slovenian hives are so easy to work with that elderly people or even a person using a wheelchair can maintain their beekeeping hobby. “You can build your bee house to accommodate your needs,” he says. “This opens up beekeeping to everyone.” Of her husband’s many interests, Prue says, “He’s gone from flowers to trees to bees.” 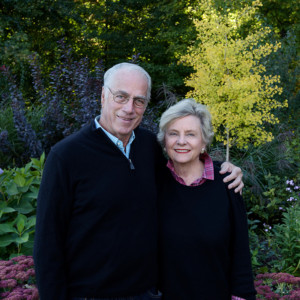 Homeowners Russ and Prue Robertson have made many improvements over the years,
putting their personal stamp on a farm that has been owned by only a few families since 1790.

The Robertsons have created a welcoming and comfortable homestead that can be enjoyed year-round. They do a lot of cross-country skiing and snowshoeing in winter, and have cleared a trail through the woods. In the open meadow, they made a bluebird trail linking sixteen birdhouses. “The bluebirds often sit in the pine tree right outside the kitchen window,” Prue says. There are hummingbird feeders stationed there as well that draw the tiny dynamos, providing plenty of opportunities to bird-watch while doing kitchen chores.

“It is amazing to think that all this came about from a Yankee magazine article,” Russ says.

More photos from this home