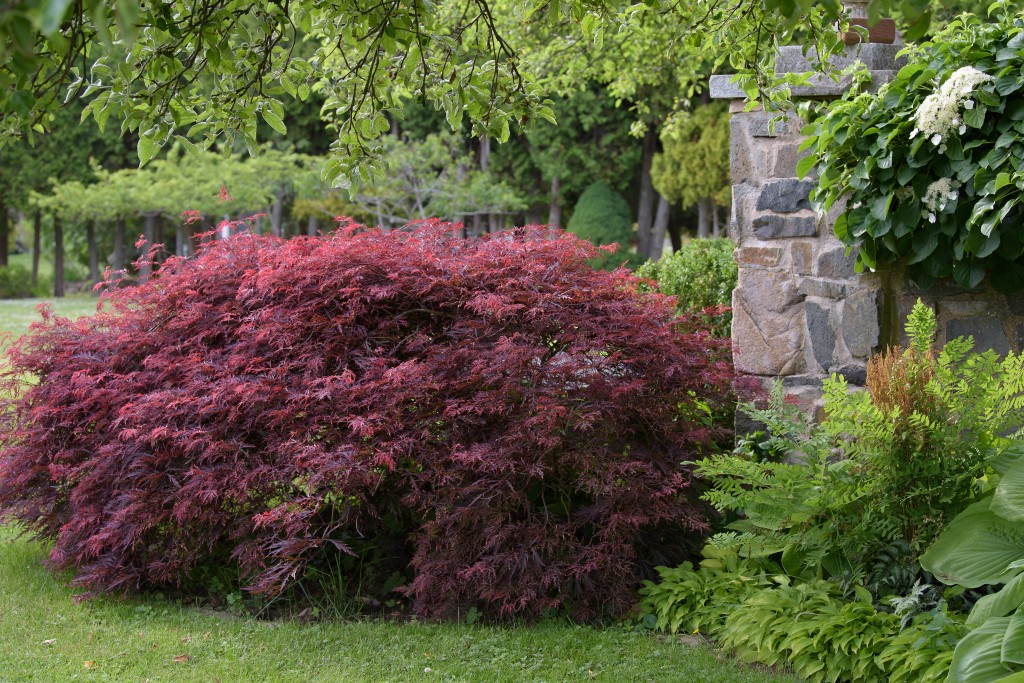 If you are looking for a plant that can provide a bright exclamation point of color in an otherwise drab, late autumn backyard, Marc Hudson of Inspired Gardener in Westmoreland suggests we check out Japanese maples (Acer palmatum).

Claire Larrabee of North Hampton has been growing them for more than 20 years and says that there is nothing about them that she doesn’t like. “I love the variety of colors, shapes and sizes. They are particularly wonderful in the early spring and fall when their leaves burst out in bright colors from pink and orange to copper and neon red and then repeat the display in October. They provide an unusual, unique look in the garden with interest that lasts throughout the year,” she says. Larrabee is especially fond of the low, weeping varieties. “We have one, ‘orangeola’, that we call Cousin Itt because it looks exactly like that hairy character from the ‘60s television show, ‘The Addams Family.’ I can’t help but laugh every time I walk by,” she says. She advises anyone interested in venturing into the world of Japanese maples to start with some of the more tried-and-true varieties like ‘bloodgood’ and ‘viridis.’  “These will give you an opportunity to see how they do in your particular microclimate, and as they are readily available, they do not require such a big investment as the more unusual varieties,” she says.

Allison Andris has a nice collection of Japanese maples in her Brookline garden. “There are very few, if any, other dwarf trees available that grow well in this climate while also offering so much variety in color and texture as well as fantastic seasonal interest. As an understory tree, they thrive in partial to full shade and do well planted under our massive pine trees,” she says. “The roots are not invasive, so you can plant them close to foundations, walkways and other plants without worries.”

Japanese maples can be integrated into a perennial border without taking over, and can be counted on to provide
an eye-catching focal point in a small garden space.  “They do not compete aggressively with other plants and are therefore great for mass plantings alongside other shade tolerant plants,” she says. Andris is growing hers with these companion plants: hostas, hellebores, astilbes, rhododendrons, hydrangea, heuchera, hakonechloa, ajuga, brunnera, bleeding hearts, epimedium, trillium and Solomon’s seal.

With hundreds of cultivars to choose from, there is a Japanese maple for every situation. Like most maples, some Japanese maples tend toward upright growth, in the classic lollipop shape, but there are other interesting forms to consider. There are vase-shaped trees, ones that grow flat-topped but wide, and the always popular cascading or weeping habit. There are multi-stemmed shrubs and single trunk trees. The largest Japanese maples can reach 20-30 feet tall and act as a colorful addition to any landscape. There are medium-sized Japanese maples that grow only 5-15 feet tall, and they are often sited to stand alone as graceful specimen plants. Dwarf varieties of Japanese maple grow to be only 4-5 feet tall and are perfect for bonsai or container growing. “If keeping them in containers, it is absolutely vital to make sure that they have well-draining soil and that the pot has good drainage. Water them deeply when the soil is dry to the touch. They prefer smaller containers but also do not tolerate drought conditions very well, so you do have to keep an eye on potted maples,” advises Andris. 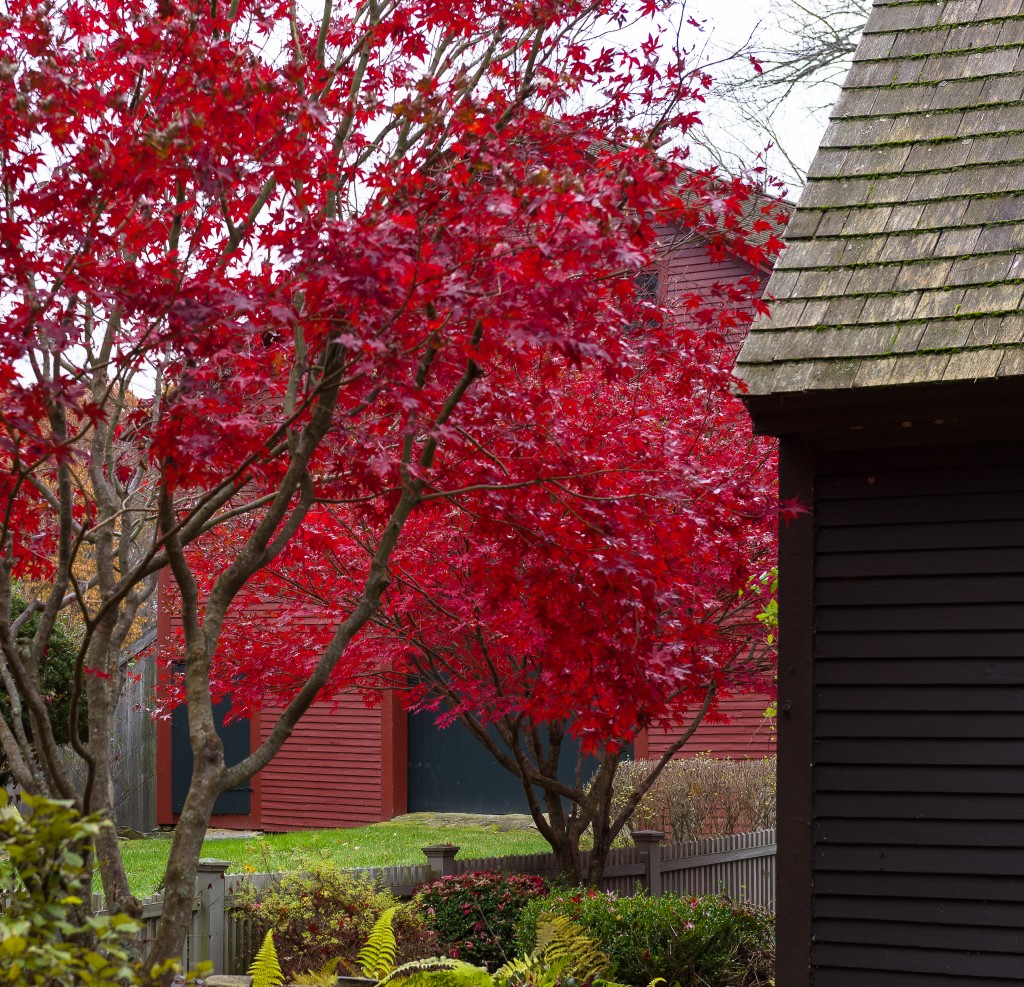 Leaf color is another variable. Some not only have gorgeous fall color but foliage that is red, lime green or maroon in spring and summer. There are ones with variegated leaves in shades of red and green, two-tone reds, and green and cream. Leaf shapes vary also. With a Latin name like palmatum, you would expect palm-shaped leaves, but some have lobes that are even more deeply cut so you’ll see the word dissectum added to their name. Their leaves are thinner and almost fern-like; they are referred to lace-leaf and those sporting lobes even more finely cut are called threadleaf. Hudson adds that two other Japanese maple species to consider are A. japonicum, and A. shirasawanum. Called the full moon maples for the shape of their leaves which are more rounded, they grow 10-15 feet tall and are first to color up in the fall. “They may be hard to find, but are worth seeking out,” he says. In winter, many varieties of Japanese maple show off their newest branches in bright red, giving four seasons of color.

One of the most important considerations when choosing the right Japanese maple for your site is hardiness. “There is the right and wrong variety out there for every location,” says Andris, so it is important to know the microclimate of your property. Many of the really flashy Japanese maples are only hardy to zone 6. “Here on the Seacoast, we can grow just about any of the varieties, but New Hampshirites inland should be careful. Given that Japanese maples are an investment, you want to make sure a particular variety can live in your area.” says Larrabee. With climate change, plant hardiness zones are shifting. Palmer Koelb of Shin-Boku Nursery in Wentworth has found that it is not getting as cold as it used to in his zone 4 location. “Now I’m growing things such as threadleaf Japanese maples that I could never grow before,” he says. 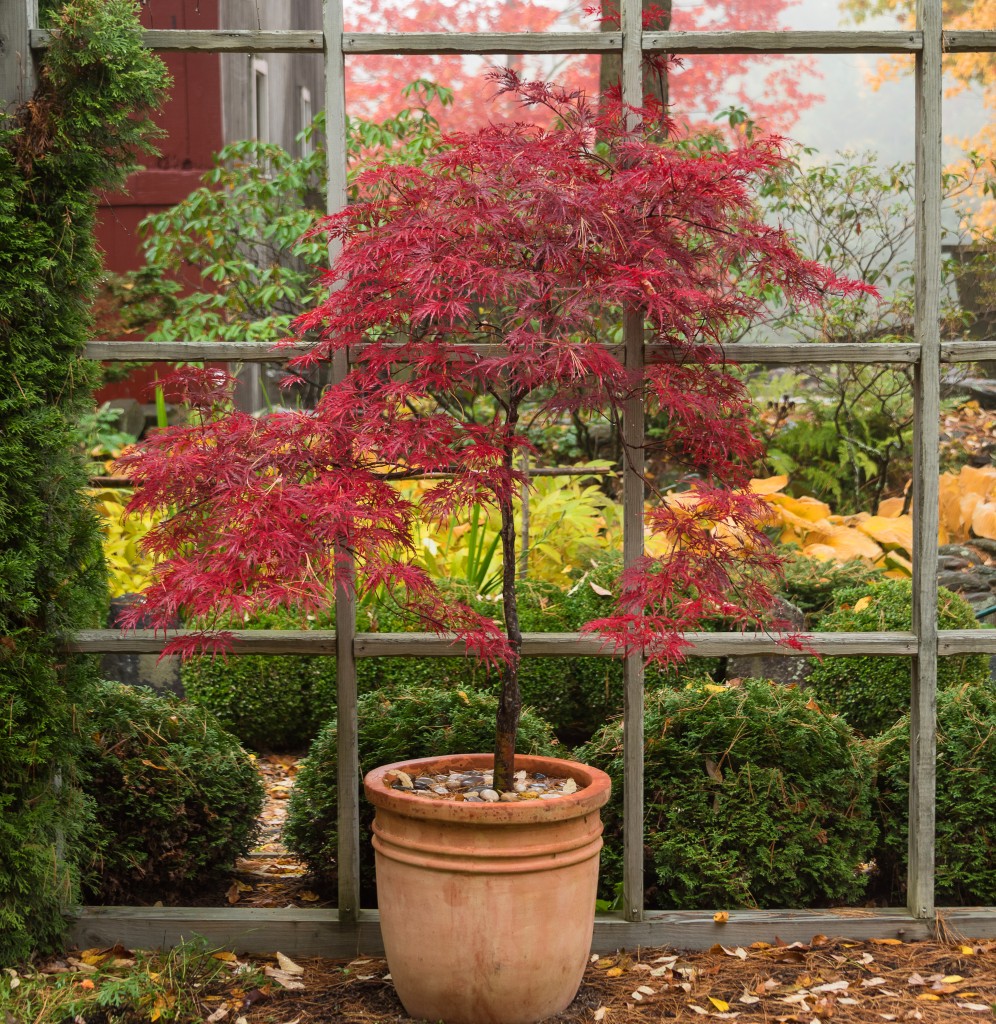 Dwarf Japanese maples are perfect for growing in containers. This tender laceleaf enjoys summers outside and spends the winter in the shelter of an unheated barn.

Buying at this time of year, we have the advantage of seeing the trees in their autumn color, so there’ll be no disappointment next fall. “The best way to gauge the overall health vigor and other attributes is when they are actively growing. You can plant in the fall thru mid-October, but it is fine to plant them all season long,” Hudson says. “Getting some roots established and mulching well is helpful. Stressed plants in general can suffer setbacks or death after a rough winter,” he warns. Japanese maples need a well-drained site in full sun or part shade. To increase their survival rate in cold areas, it is recommended that they be planted in a spot sheltered from bitter winter winds. Once established they need no extra watering or fertilizing. They are not susceptible to diseases that plague other maples, but Japanese beetles may find them attractive. “They are more rugged than they are sometimes given credit for and tolerant of drought once established. I find very few issues from either insects or disease,” Hudson notes. One major drawback to consider nowadays is that while there are many native companion plant options, Japanese maples themselves are not native and therefore do not benefit our local wildlife.

A Guide to Japanese Maples

With so many cultivars, it can be hard to know what to choose. Marc Hudson recommends these 10 varieties of Japanese maples: