Add some color and cheer to your home with African violets

The bright hues of African violets, gloxinia and other houseplants that flower this time of year can help chase away the winter blues. 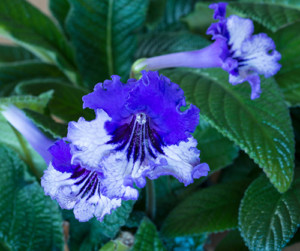 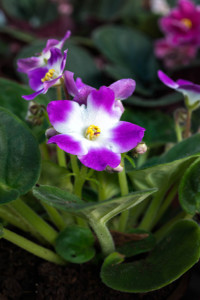 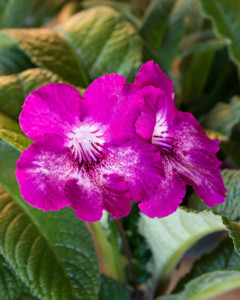 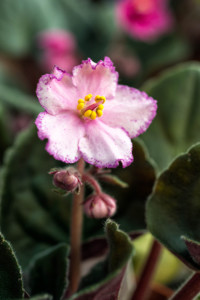 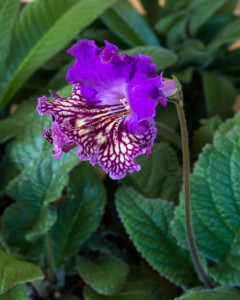 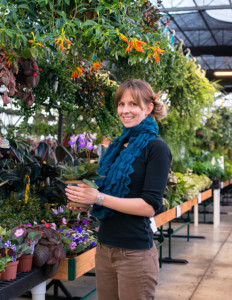 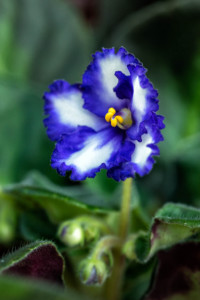 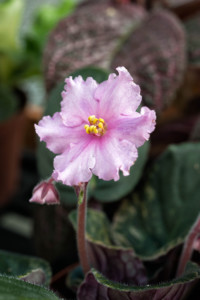 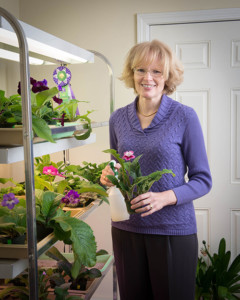 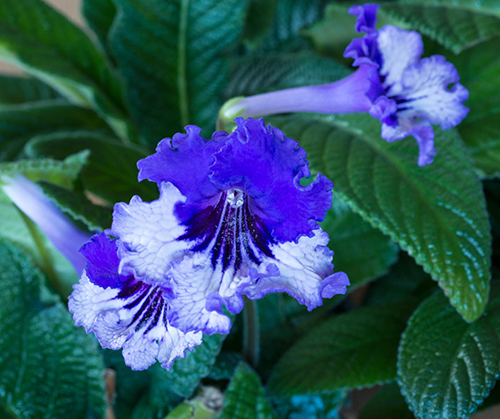 Chase away the winter blues with this sparkling blue and white Streptocarpus called 'Crystal Blue Persuasion'.

The solstice has passed and the days are starting to lengthen, but don’t expect spring weather anytime soon. As the old-timers say, “When the days get longer, the cold gets stronger.” While winter rages on here in New Hampshire, countries south of the equator are enjoying summer weather. If traveling to a tropical climate is not in your future, maybe some new, colorful flowering companions will help to get you through the cold days ahead. Check out this family of plants that hail from the Southern Hemisphere: the gesneriads.

The Gesneriaceae family, named for Swiss botanist Konrad Gesner, includes more than 2,500 species of plants native to Africa, Southeast Asia, and Central and South America. There are hundreds of gesneriads that make good houseplants, but the one we are most familiar with is the African violet (Saintpaulia ionantha). Native to Tanzania, the African violet gets its Latin name Saintpaulia from the governor of its provinces and amateur botanist Baron Walter von Saint Paul. While stationed in the country then known as German East Africa, he sent specimens of these wild violets home to his father in Germany in 1892. The second half of the Latin name, ionantha, means violet-flowered. In a very short time, African violet seeds and plants were available across Europe. Commercial growing of these plants began in the United States in 1926.

Lisa DiMambro of Chester has been growing African violets and other gesneriads in a serious way since she was a teenager. Now she is an active member and past president of the Granite State African Violet and Gesneriad Society. It is a small club that meets monthly at the Marion Gerrish Community Center in Derry to show, swap and sell plants, and hold informational workshops. “My grandmother introduced me to these plants when I was just a little girl,” DiMambro says. “She was friends with a prominent grower in Connecticut and would take me with her to visit. I knew I had to be on my best behavior to get to go to the violet lady’s house. By the time I was fifteen, I was hooked.” 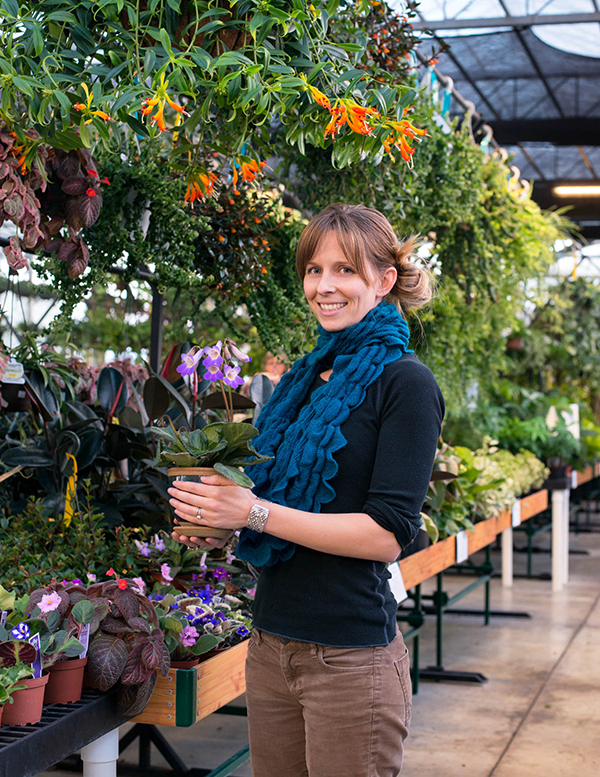 Quenby Jaus of Wentworth Greenhouses in Rollinsford holds a primulina. Even easier to grow than an African violet, this showy plant can withstand neglect and still bloom almost continually year-round. “A must-have for any gesneriad collector,” says Jaus. On display is a fine collection of other plants in the gesneriad family, including lipstick vine, goldfish plant and flame violets.

Although they may look fragile, African violets are pretty tough plants. They are easy to take care of, come in a wide range of colors, have attractive foliage and are compact growers, just right for windowsill gardeners. African violets have a few demands but will reward you with a constant bloom when happy.

Like people, African violets appreciate a warm house of between 65 degrees and 75 degrees during the day with a drop to 60 degrees at night. Bright, indirect light is ideal, although during the short days of winter, African violets can tolerate full sun. They bloom best when slightly pot-bound, so don’t be in a rush to repot them.

African violets are shallow-rooted plants, so they grow best in a pot that isn’t too deep. If your plant has outgrown its pot, ceased to flower or develops multiple crowns, it is time to repot. Plants with multiple crowns can be divided, giving you more plants to enjoy or share with friends. DiMambro recommends using a fast-draining African violet soil, or making your own by combining equal parts potting soil, peat moss and perlite. She raises rabbits and finds that adding a little bunny poo or composted cow manure to the mix is also beneficial to the plants.

African violets are easy to propagate by rooting a leaf cutting, which is why many growers offer leaves for sale so you can produce your own plants inexpensively. “Cut the stem at an angle and bury the tip between ¼-inch and ½-inch deep in potting soil,” DiMambro says. “Cover loosely with plastic and place in a warm spot to root. No rooting hormone is needed.” In three or four weeks, you have roots, and in another three or four weeks, new plants emerge. They flower in six to nine months.

Careful watering is the key to an African violet’s good health. The plants can be watered from the bottom by filling a saucer under the pot with room-temperature water and letting it wick up through the soil. After thirty minutes, drain the excess. DiMambro uses a felt mat under her plants to make watering easier. She can fill the reservoir and know her plants are wicking up the water they need. She says it is perfectly acceptable to water from the top, as long as you don’t leave the center of the plant wet. “It doesn’t harm the leaves to give them a warm shower now and then to clean them, as long as you blot up any excess water that is left in the crown,” she says. “To avoid spotting the leaves, make sure they are dry before putting the plant back in the sun.”

Overwatering kills the plant, so allow the soil to dry out a bit between waterings. DiMambro recommends using a “weakly weekly” approach to fertilizing by using 20-20-20 fertilizer mixed with water at one-fourth the strength recommended on the package at every other watering. “I water twice a week so every other watering they get a quarter-strength dose of fertilizer.”

Holly Walker of New London is the current president of the Granite State African Violet and Gesneriad Society. Like DiMambro, Walker was hooked by these plants at an early age. Along with about twenty-five African violets, she grows about fifteen Streptocarpus, another gesneriad that makes a very showy flowering houseplant. Also called Cape primrose because of its South African origins near the Cape of Good Hope, this plant’s leaves resemble the foliage of a garden primrose.

Although the leaves are much larger than those of the African violet, the Cape primrose is still a good windowsill plant. It produces large, trumpet-shaped flowers on an eight-inch-tall stalk. The blossoms come in a wide range of colors, such as red, pink, purple, blue, yellow, white and near black. There are plants with blooms that are multicolored, striped and double-colored.

DiMambro also grows gloxinia (Sinningia speciosa), another showy cousin in the gesneriad family. Also called the velvet slipper plant, this Brazilian native can bear as many as twenty richly colored blossoms up to four inches across. Coming in colors such as blue, pink, purple and red, gloxinia often has a contrasting throat color or edging. Like the other gesneriads, gloxinia appreciates moist, peaty soil; bright light; and high humidity. After flowering, the leaves die back, leaving a tuber that needs to rest for about two months. During this dormant period, put the plant in a cool, dark place; taper off watering; and don’t fertilize. When new growth begins, repot in fresh soil, and gloxinia will flower again. (Gloxinia can also be grown from seed or cuttings.)

Once you have mastered growing African violets, Cape primrose and gloxinia, you may want to branch out and give some of the lesser known gesneriads a try. Most have the same cultural needs as African violets but vary widely in appearance.

Check your local greenhouse or garden center for Columnea, also called the flying goldfish plant because its blossoms resemble red, orange or yellow fishtails. There are hanging and upright forms of this colorful plant.

Nematanthus, or goldfish plant, has a similar blossom but shiny green foliage. The lipstick vine (Aeschynanthus) has bright, tubular-shaped flowers and is a pest-free hanging plant. Flame violet (Episcia) has brilliant red or orange flowers, and richly textured foliage, but requires more light,warmer temperatures and more water than African violets. Streptocarpella is a popular hanging plant with small, purple, violet-like flowers and fuzzy leaves. These are just a few of the beautiful gesneriads that can be grown as houseplants.

For more information on African violets and gesneriads, visit the African Violet Society of America at www.avsa.org or the Gesneriad Society at www.gesneriadsociety.org.

African violets are featured at the fifty-third annual Spring Plant Show and Sale on April 26 and 27 at Tower Hill Botanical Garden in Boylston, Massachusetts. There will be judging of plants with ribbons and prizes awarded; workshops; plant and leaf sales; and supplies available. For more information, visit www.baystateafricanviolet.org.

The Granite State African Violet and Gesneriad Society holds regular meetings at 6:30 p.m. on the first Thursday of each month at the Marion Gerrish Community Center, 39 West Broadway in Derry. New members and visitors are welcome. Call Holly Walker at 526-9442 for more information.

View more photos from this article

A House with Secrets