All About the View 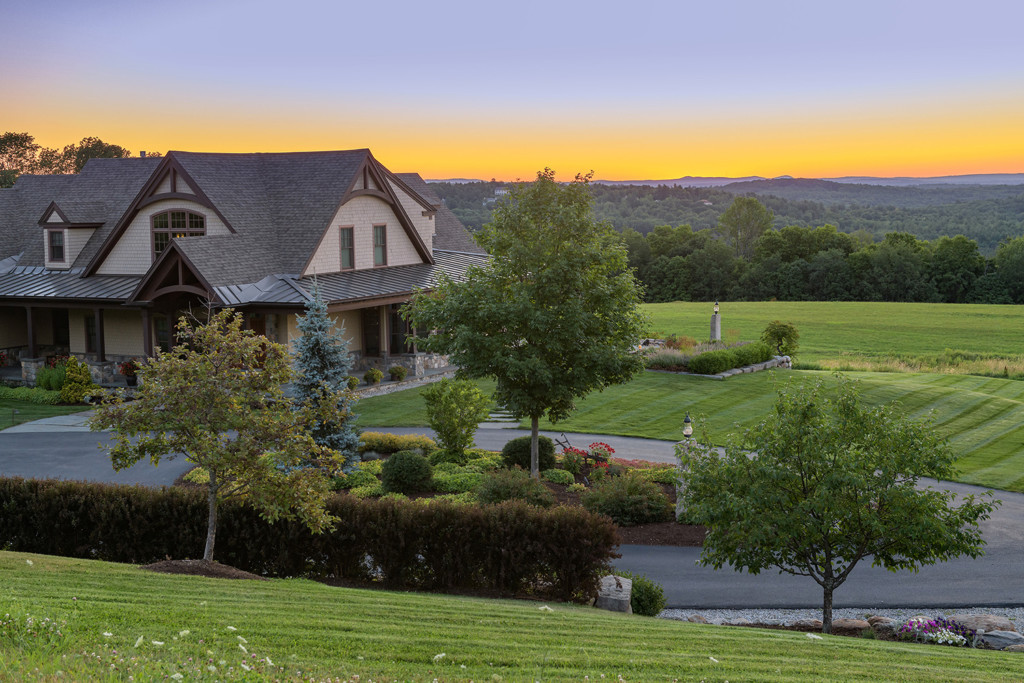 Sunrises are exquisite at the Plotskers’ hilltop home.

The view. There are few like it in southern New Hampshire. A panorama of the horizon so wide you can see Fourth of July fireworks in dozens of towns.

For a long time, centuries, the view was enjoyed by the occupants of the old farmhouse that sat on the crest of the hill in Amherst. Cows grazed the land around it; the stones in the fields had been moved to form border walls. There was a large barn built on a sturdy foundation of granite.

Vadim Plotsker happened upon the property one day on a motorcycle ride, detouring down a dirt road. “I never knew anything like that was there,” he says. Although the house and barn were dilapidated and seemingly abandoned, one look at the stunning view convinced Vadim to explore buying it, even though there was no “for sale” sign. It worked, and he and his wife Colleen began to plan their hilltop home.

There was no saving the old farmhouse and barn, although pieces of the property’s past would inspire what was to be. Much of the stone and wood from the house and barn was reclaimed for the new home, and used both inside and outside. Inside, the stone was used for an accent wall and fireplaces; the wood, for beams, trusses and flooring. “We tried to stay true to New England, reclaiming as much as we could,” Vadim says.

Outside on the driveway, approaching the house, there’s an arched faux bridge that’s made of stone gathered on the property. Then, there’s the signpost engraved with the address, made of granite that came from the old barn’s foundation. And the low walls that surround the entryway and porch are gathered stone as well. But that’s just the start. 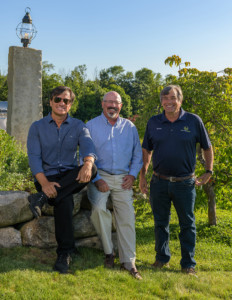 Members of the design team include, from the left, Jason Aselin, of JAD Design Group in Amherst; Chuck Simpson, of Simpson Landscape Co. in Dublin; and Steve Desmarais, of NH Custom Builder in Amherst.

Walk down the hill to the back of the house, which was built by NH Custom Builder in Amherst, and you’ll see that what at first appears to be a smallish house isn’t small at all. It hugs the breadth of the hill, at its center standing three stories high.

Its architectural style has the Western influences and organic feel the Plotskers wanted, accomplished with—as architectural designer Jason Aselin, of JAD Design Group in Amherst, says—dark-stained gable trusses, rough-hewn cedar shingles, copper roofing and a stone chimney. Plus, he says: “The lowest level is all clad in stone. That ties it to the landscape and helps conceal the vertical height of the house.”

The size of the house was a major consideration in its landscaping, which was designed by Chuck Simpson, of Simpson Landscape Co. in Dublin. “We needed to use large stones to scale the property,” he says.

Fortunately, there were a lot of large stones handy. The steps are made from granite reclaimed from the barn; the fieldstones came from crumbling cattle barriers in the woods. “You can’t get a better situation,” Simpson says. “Landscaping a home with indigenous igneous rocks was perfect.”

The fieldstones provided the outlines for the outdoor spaces the Plotskers wanted: an herb garden, a grilling area, a hot tub and a pool surrounded by a bluestone patio. The kidney-shaped pool and the striking, terraced-waterfall feature that feeds it were built by South Shore Gunite Pools & Spas, Inc. in Amherst. The patio was designed to look like the pool had been carved out of the middle of it.

The size of the bluestones used for both the pool and the paths also helps scale the house. Simpson says some were as large as six-feet-by-ten-feet; they were between three inches and four inches thick to add heft and avoid cracking.

The heavy hardscape is softened by the plantings. For that, Simpson found inspiration in an old copper beech tree that had been growing on the property for who knows how long, perhaps one hundred years.

“It set the tone,” Simpson says. What he calls the “deep red purple” of the tree is carried throughout the design with plantings of similar color—weeping Japanese maples, huskers red penstemon, heuchera palace purple, sweet potato vine and crabapple cardinal tea among them. 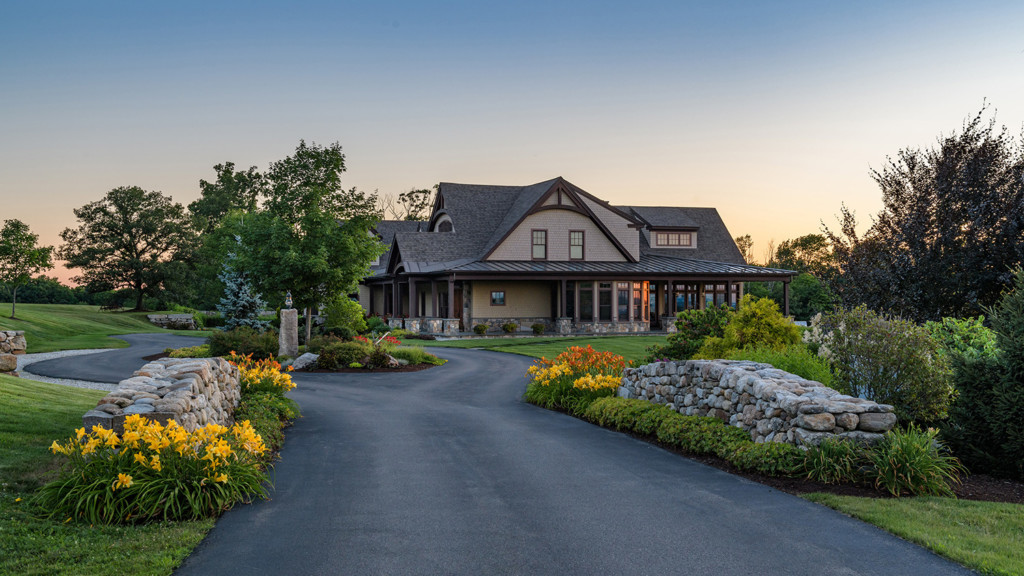 The home’s long driveway ends with a welcoming faux bridge made of stone gathered on the property.

Sugar maples were planted on the periphery of the house. “And,” Simpson says, “we had some fun with Maackia amurensis, weeping kousa and a fragrant garden surrounded with winter gem boxwood.”

He also used massing plants to create a collage of color and texture: cutleaf stephenandra, ruby summersweet, germander and ornamental grasses among them. Hedges were used to define areas. The bluestone paths were laid into the grass or low-growing ground covers, such as thyme, potentilla and sedums.

The fencing, done by Gate City Fence Company in Nashua, starts at the house with the look of black wrought iron and then transitions into a farm-like split-rail fence, again evoking the property’s rural past.

The best of both worlds

Whether enjoying the pool and patio, or relaxing on the porch, there’s nothing to interrupt the homeowners’ view of the nearly seventy-acre property and the vista beyond. “It’s half fields, half woods,” Vadim says. “The best of both worlds.”

“The best” is also how the project’s team members and homeowner describe one another and their work. Together, they created a dream home. As Vadim says: “It’s awesome. We love it. Sometimes we feel like we live in a postcard.”