All Decked Out for the Holiday Season

As the holidays approach, many of us drag a box or two from the basement; dust off the accumulated decorations—family heirlooms, children’s school projects, items whose provenance we can no longer recall; and drape, hang and festoon until we run out of room or energy. It’s festive, but catch-as-catch-can in terms of aesthetics.

The homes in this article were each decorated for a particular holiday project: two for a holiday house tour to benefit the Palace Theatre in Manchester and one for a holiday showing of the Bridges House, the newly renovated governor’s residence in Concord. They feature holiday décor that is more focused than what the average homeowner might put together in a given year. Yet the ideas behind the art, including the use of traditional and nontraditional decorations in novel ways, can provide inspiration to anyone. 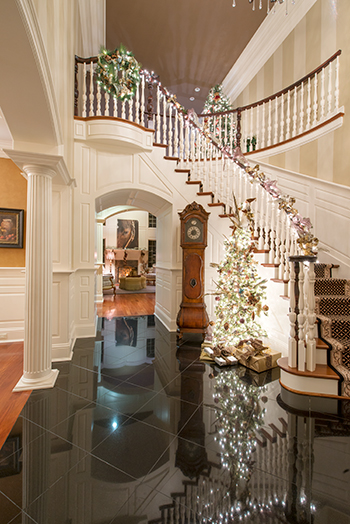 Photography by John W. Hession
White lights keep the look elegant and cohesive in Chris and Christina Rowen’s Bedford home. She buys her decorations from a local florist supplier, Grenon Trading Company, and draws inspiration from the showroom.

stunning holiday decorations. One of the houses on the Palace Theatre tour belongs to Chris and Christina Rowen of Bedford. Christina is a software professional who decorated her own house for the tour, with some help from Grenon Trading Company in Bedford. Grenon decorated the front of the house with a wreath on the large, paned window over the entrance, swags on the double doors, and greenery framing the entrance and elsewhere. For the inside, she purchased trees that were pre-lit and pre-flocked from Grenon. Christina notes that she has been buying decorations from Grenon for the last ten years, and she gives the company a lot of credit for her ideas. “What they have in their showroom inspired me and allowed me to decorate my house so beautifully,” she says.

Christina is partial to white lights: “It helps keep things cohesive,” she says. She also felt it was helpful to “pick a color scheme and stick with it.” The tree in the living room was decorated primarily in red and white, with candy canes and tiny, striped stockings in addition to red ornaments and white lights. A brilliantly white-lit tree in the family room was hung with golden pinecones and other ornaments.

For the table setting in the dining room, Christina used an antique cradle for the centerpiece, which was filled with an arrangement of dried and silk flowers by Grenon that she uses year-round. The dishes and napkins were in shades of gold and white, creating an environment that was festive and elegant without being over the top.

In Concord, Julia Dias of Julia Dias Interiors, LLC in Bedford provided holiday decorations for the great room of the Bridges House. New Hampshire’s executive residence received an extensive makeover last year so the space could better serve the government and the people of the state. To help fund the project, eighteen designers participated in a show house late last year that was followed by events such as holiday craft workshops and historical presentations.

Dias, who designed the great room (formally called the Mount Washington Room) for the show house, complemented the stately, elegant furnishings with holiday decorations inspired by nature. For the tree, donated by a New Hampshire tree farm, she used bird and snowflake ornaments; garlands of acorns and pinecones; and red, blue and gold balls. “I tried to use things you would find in New Hampshire,” Dias says. “I went for an earthy—rather than a glamorous—look.” The angel who tops the tree is correspondingly “down to earth” in her wool dress and plaid cape. “She looks like an angel from New Hampshire,” Dias says.

For the mantelpiece, fireside decorations and table centerpiece, Dias used balsam, cranberries and pinecones. The balsam (from Grenon Trading Company) was artificial, she explains, because real greenery wouldn’t have stayed fresh throughout the weeks (post-Thanksgiving through New Year’s) of the display.

For the table setting, Dias used a vintage, handmade lace tablecloth from the 1920s. In the centerpiece—surrounded by balsam, pinecones and decorative autumn fruits—is a gold-toned hurricane lamp of mercury glass, a deliberate reference to the 1930s and 1940s when Governor Styles Bridges was living in the house.

One decorative element in the room proved surprisingly popular. Dias nestled frosted pinecones in a rimmed candle stand and placed a sterling-silver bowl filled with old-fashioned ribbon candy in its center. Visitors to the house helped themselves to the candy, and Dias frequently had to replenish it.

The interior design for Graff’s brick, Colonial-style home in Bedford had been done by Leslie Rifkin of L Newman Associates in Manchester, who also assisted in decorating the home for the holidays. Jessica Thompson and Nancy Godbout (owner) of Jacques Flower Shop and Garden Center in Manchester also transformed the home into a “festive phenomenon,” in Graff’s words. 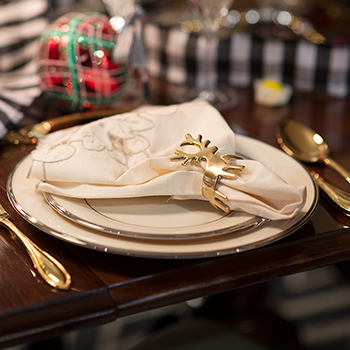 Napkin holders in the shape of reindeer are perfect for Christmas.

Thompson and Godbout trimmed the house, inside and out—stringing white lights on the trees and bushes out front, and adding a rustic sleigh with lights as a centerpiece. White lights also framed the front door, where a large evergreen wreath was trimmed with a red bow whose long streamers nearly grazed the ground. Lights brightened the greenery installed in large, black urns on either side of the door.

Inside, the florists used fresh greens to festoon several rooms, including the hearth room’s “tablescape” of poinsettias, amaryllis plants, and artfully twisted bark and burlap surrounding a large sisal deer and smaller woodland creatures. Thompson and Godbout hung sisal balls and twigs from the chandelier over the table to complement the arrangement from above. In the same room, poinsettias adorned a sideboard, and wreaths and a swag decorated the bay windows.

In the dining room, the florists created a table centerpiece of potted amaryllis plants and calla lilies. The table settings were designed by Rifkin. “I wanted to do something very festive and traditional,” Rifkin says, “so the table would look a little like Christmas morning, with all the wrappings and ribbons.” To accomplish this, she wound checked ribbon and bead garlands around the centerpiece. She used red balls as accents and filled the wine glasses with silver beads to suggest champagne bubbles. For the place settings, Graff’s china, silver, wine glasses and napkin rings were brought out, along with Rifkin’s embroidered cloth napkins that she bought on a trip abroad. Marzipan lemons to the side of each place setting provided color variety and also referenced a palate cleanser.

To decorate the trees, Thompson and Godbout used fresh flowers as well as the traditional lights and balls. They adorned the “white” tree in the living room with fresh red roses, and the family room tree with green mums and other blooms. Each flower had a water tube to keep it fresh. The blooms lasted about a day, Thompson says.

Graff was inspired by the decorating project. First, she was captivated by the quantity of fresh greenery that the florists used: the lovely smell wafted throughout the entire house. “I also learned how incredible poinsettias can be,” she says. “I usually buy one or two. They brought in thirty or so.” Thompson and Godbout also mixed the poinsettias with Graff’s houseplants to convey a lush, festive look.

“It was so fun and a great experience,” says Graff, who also got to enjoy the decorations after the fundraising event, in particular for her own annual holiday party with more than one hundred guests.

With another holiday season upon us, it’s worth thinking about mixing up our own holiday decorations. While it might not be practical to use fresh flowers to trim our trees, silk flowers can provide a similar effect. That old standby, the poinsettia, can be used in greater quantities or mixed in with year-round houseplants to create a lush holiday look. Choosing a theme, like Dias did with New Hampshire nature, might allow us to use decorative elements we hadn’t thought of.

In other words, go ahead and dust off your old and beloved decorations, but don’t be afraid to add something new to this year’s mix.