Squam Lake attracts a Texas family, who assembled a team to custom-design their five-thousand-square-foot vacation home.

Love at first sight applies to places, too. Thirteen years ago, Texas residents Ann and Tom Estus fell in love with Squam Lake at Rockywold-Deephaven Camps in Holderness. They brought their young son and daughter for a two-week summer vacation, and were hooked.

“We loved the lake, the privacy, the lifestyle,” Ann says. “We knew we wanted
to be on this lake.” Several years later, the couple bought an existing lakefront camp next door to Rockywold and removed the circa-1970s modular home that was on the property.

The couple began working with architects Chris Williams, AIA and Sonya Misiaszek, AIA to design a rustic, finely crafted home that embraces rather than encroaches upon its natural surroundings, wetlands and existing trees and foliage. (Initially both architects were with Christopher P. Williams Architects, PLLC in Meredith; Misiaszek, who served as project architect at Williams’s office, completed the Estus home at her new firm, Misiaszek Turpin PLLC in Laconia.)

“We knew we wanted it to be rustic,” Ann says. “I wanted a house that glowed from the inside, using pine to create that glow.” Knotty pine paneling was installed horizontally on most of the home’s interior walls, ceilings and floors. The only drywall was used in the basement. “We wanted the home to look as much like the cabins at Rockywold as we could,” Ann says.

Williams—whose family has spent four generations on Squam—says his time on the lake fostered a respect for the naturalness of the area. “I try to blend in the homes to the largest degree possible,” he says. “Lots of people first clear a site and come in later with landscaping. I would rather fit the home right into the existing site, and work around existing rocks and trees, and have a place that looks like it belongs there.”

On the Estus property, he says, there was a lot of effort to naturalize the site. “The homeowners wanted a design that  reflected the rusticity of the lake,” Williams says.

For the interiors, Ann and Tom Estus chose knotty pine panels, installed horizontally on the walls then vertically above the windows, for a relaxed, old-fashioned camp feel.

“It was important that we really work on the scale of the house,” says Misiaszek. “So the materials selected were chosen to reduce the scale of the building.” The skirl (wavy edged) siding is natural and, when installed horizontally, helps ground the house into the lakefront, wooded setting.

Builder Dale Blackey of Twin Oaks Construction in Plymouth brainstormed with Ann and the architects to execute that cabin-like theme with custom features. The project allowed the carpenters on the project to “really do our thing,” Blackey says. “We spent a lot of time brainstorming and at on-site meetings. Ideas progressed as the job came along and we figured things out together. It really came out the way Ann and Tom wanted it: very cozy, relaxed, low key and totally comfortable.”

The five-thousand-square-foot home with a finished basement features unique touches—secret spaces inspired by the Harry Potter novels; a private reading room for Ann; and animal and bird-themed features, such as bear cutouts in the woodwork and robins painted in daughter Robin’s room.

A large fireplace in the living room faces out to the three-season porch to add warmth on cooler nights. “We brought the outside in with the screened porch,” Misiaszek says. “We built a back-to-back fieldstone fireplace so there is just one chimney.”

The three-level home includes four bedrooms, one of which is a master suite with a private deck and outdoor shower; four bathrooms; Tom’s home office above the two-car garage; a laundry room; a family room; and a children’s game room with a dance floor.

Outdoors, one of the most stunning features is the stone pillars and real root-flared tree trunks that hold up the deck. “When you have that root flare, it gives it more interest,” Williams says. “The home looks grounded.” 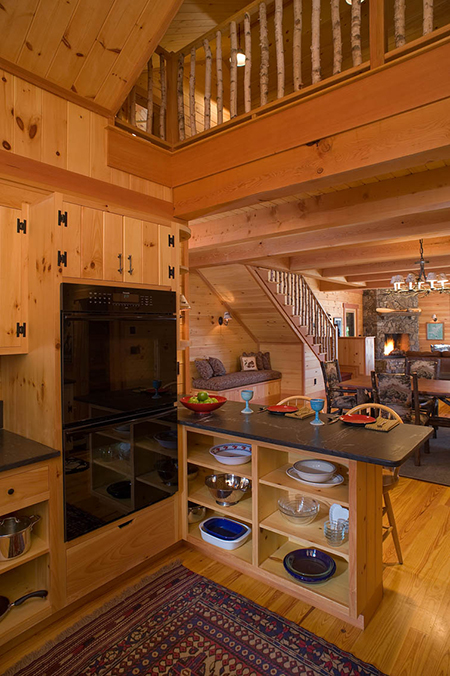 In the kitchen, visitors find modern conveniences hidden cleverly behind custom cabinetry; however, they won’t find doors on the cupboards. Homeowner Ann Estus wanted an authentic, relaxed “camp” feel to the kitchen.

Another key design point is that the home is difficult to see from the water, thanks to the natural stone and woods that blend into the landscape, Williams adds.

On the deck, the railing balusters were crafted from locally collected birch branches. All these touches make the home unique to this family, Misiaszek says.

Landscape designer Connie Maatta of Design Plus in Plymouth and Chris Hixon of Ellie Farm Landscaping, Inc. in Holderness chose native, natural fieldstone for the entrance to the front door. The stones were locally collected for an indigenous look.

“It’s the way old camps would have been built, with stone from the immediate area,” Maatta says. She naturalized the area with blueberry bushes around the nearby wetlands and the shoreline. Lake views were opened up with “very judicious” pruning of the trees, she says.

Maatta and Hixon used all native trees and shrubs, such as several species of maple trees; serviceberry trees; Christmas ferns; clethra for groundcover and for its white summer flowers; and some ornamental plants, such as lilacs and peonies that Ann chose.

“I have to say my favorite part of the project was that the home is along a stream, near wetlands that are so full of life—it was teeming with birds. The homeowners embraced the natural landscape. That’s so refreshing,” Maatta says. “That was the best thing, that Ann and Tom can appreciate the ecology they are living in.”

“I wanted everything to be as cozy and natural as can be,” Ann says. Comfortable cushions were set on a built-in reading bench. In the bathrooms, Blackey crafted mirrors with frames made from acorns and birch-tree bark. The natural wood theme carries to the bathroom counters, crafted from live edge boards—planks that Blakely says still have the bark on the edges. He used marine-grade polyurethane to waterproof the countertops. Blackey says he worked closely with Misiaszek to execute the interior personal touches, and had fun creating customized levers and gears for the secret rooms. As rustic as it may appear, the home does have all the expected modern technology. “However, anything like the stereo system or televisions is behind doors, out of sight. We tried to hide things best we could so it just disappears,” Blackey says.

In the kitchen, most of the cupboards are open shelved. The kitchen counters are soapstone. “It’s a very easy house to maintain,” Ann says.

Hand-forged-iron light fixtures and cabinet hardware by blacksmith David Little of Winnipesaukee Forge in Meredith add more rustic charm and personality to the home. Custom-forged light sconces in the shape of cattails are in the master bedroom; the
dining room chandelier is in the shape of pine branches hovering over the table.

As for the fabrics and furnishings, interior designer Dawn Heiderer of Design Inspiration Inc. in Center Harbor and the Estuses chose colors and styles that fit the home—nothing too traditional or contemporary.

“The goal was to make this home a place where the homeowners felt they were at one with the environment,” Heiderer says. “The colors are taken right from nature. There are no bright reds or contemporary colors from the beach, no ocean colors, only natural tones from woods and the lake.

“Great pains were taken to coordinate their style and keep it rustic and lake-like,” Heiderer says. She very much sees her role as an “insurance policy” to protect the investment for the homeowner: “When you buy something of quality, you don’t have to replace it every ten years.” All of the furniture is custom made, using old wood and bark, and from either the LaLune Company or the Copahy Flatrock Furniture Company. The fabrics are textured, user-friendly and natural.

“The general feel of this house is timeless. I don’t think there is anything that will ever get dated. Its classic, unique and a one-of-a-kind design fits with the location, the environment and the homeowners’ personalities,” Heiderer says.

While the Estuses may eventually retire to their lakefront retreat, in the meantime, Ann says she’ll spend as much time as possible on Squam Lake.

“Up here, we get to read, water ski, hike, mountain bike outside our front door,” Ann says. “I’m my better self up here on the lake.” 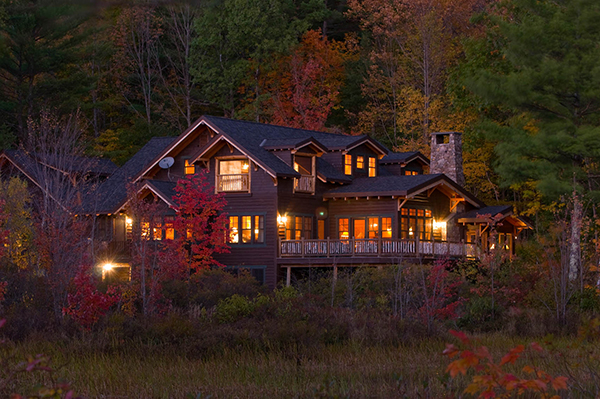