With help from Leslie Rifkin, A Bedford family redesigned their home to reflect their lifestyle. 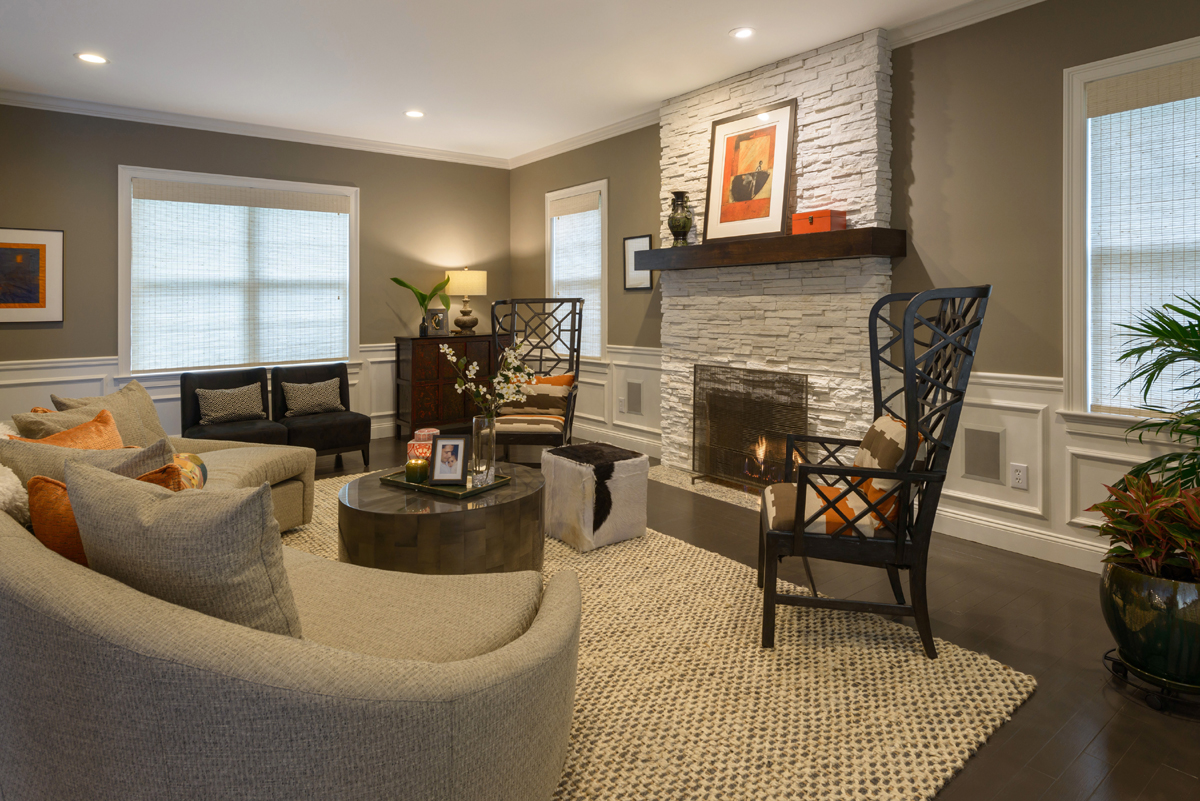 The living room, with its sophisticated yet comfortable furnishings, epitomizes the home’s interior redesign.

After more than a decade in the Bedford house they had bought new in 2005, the owners were ready for a change. The house was well built, and the neighborhood was a good fit for the couple and their two children and dog, but the interior didn’t align with their practical and aesthetic needs. The kitchen seemed too small for the rest of the house, especially as the wife is an avid cook. And each room was painted a different color, making for a somewhat busy environment—particularly since the couple owns many original works of art. “The art was being lost,” the wife says. “We wanted it to pop.” The couple was also looking for better flow and continuity. “We were seeking a more calming, comfortable environment,” the husband says.

Even before they started thinking about a new interior design a couple years ago, the homeowners had already put a great deal of work into their approximately five-thousand-square-foot, brick Colonial house. Five years ago, the family transformed their back yard and small deck by adding a saltwater pool, split-level stone decking, a grill and fire pit area, and a putting green (their son is a competitive golfer). Other recent improvements included a custom garage, a new front entrance with hardscaping, and brick to replace the siding on three of the house’s exterior walls (originally, only the front was bricked).

Making space for art and life

In 2017, the couple started looking for a designer to help them create a more comfortable and artful indoor space. They discovered the work of Leslie Rifkin, of L. Newman Associates in Manchester. “I was intrigued by Leslie when I saw what she had done with another house in Bedford,” the husband says. “Her work was comfortable but contemporary.” After the couple met Rifkin and shared their visions with her, they quickly decided they had found the right designer. “We had a look in mind, but we didn’t know how to create it,” the husband says. “Leslie understood who we were, and her ideas were on point.”

The homeowners’ extensive artwork—much of it colorful—was the primary design focus, according to Rifkin. Their walls feature works by Harrisville artist Christine Destrempes (the mother of the husband), and Peterborough artists Daniel Thibeault and Sue Callihan, among others. Metal sculptures by the husband’s father, Noel Greiner, also appear throughout the house.

Rifkin’s overarching idea was to soften and connect the downstairs spaces by using a palette of soft grays to serve as a neutral backdrop for the artwork. “The art was going to be the standout color,” she says. Lighting for the art—including track and LED lighting—also featured prominently in her design.

Although construction wasn’t a major part of the project, structural changes included the removal of two non-supporting pillars between the sunken living room and the rest of the main living area, and the enlargement of the kitchen island. In addition, a closet and very tight pantry that had been almost “unusable space,” in the words of the husband, were opened up and converted to a handy mudroom with cubbies the children use to organize their belongings. Matt Green—of MPG Construction in Merrimack, who has done projects for the couple for many years— performed the bulk of the construction work. 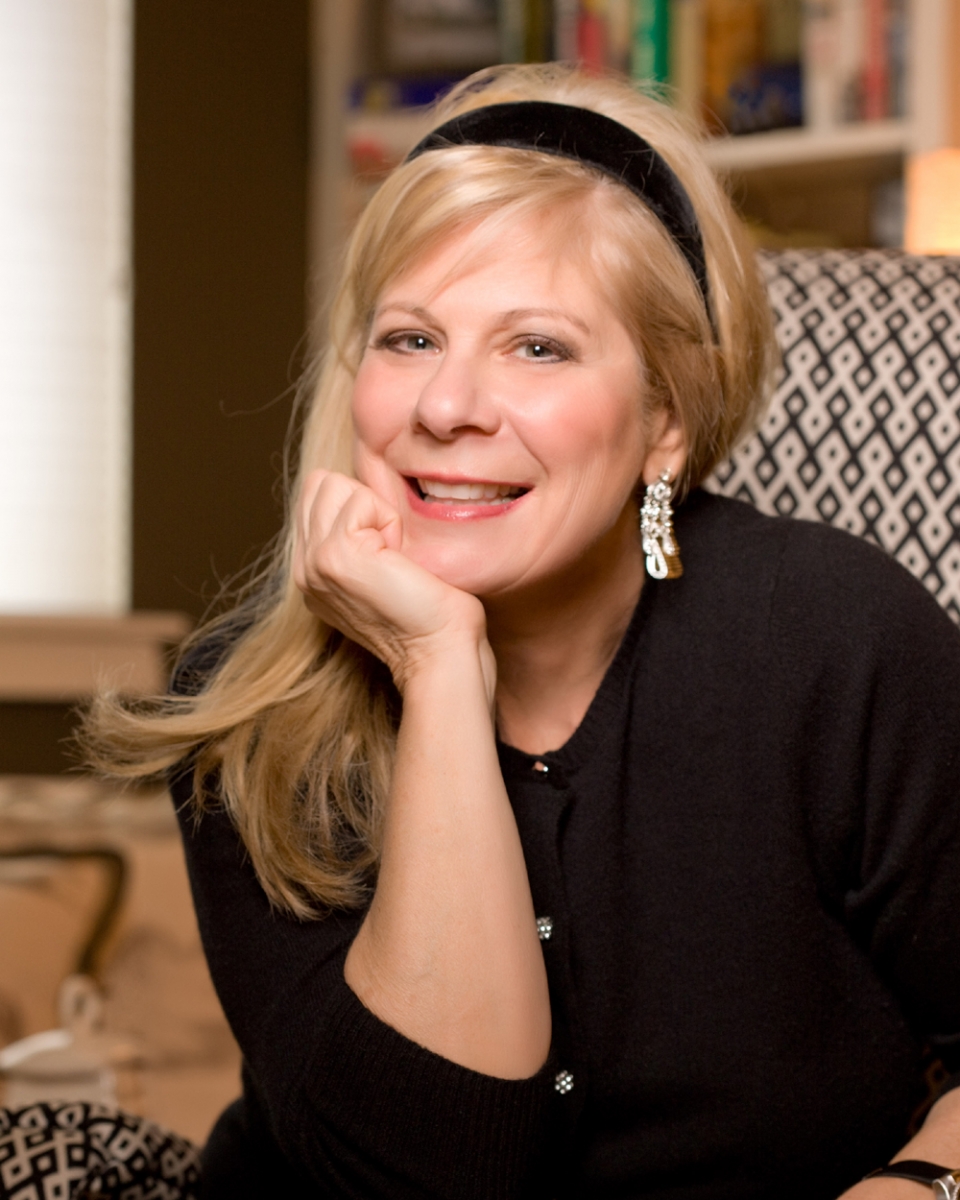 In determining the furnishings for each room, Rifkin retained as many items as possible, while also suggesting purchases of key new items. Some of the existing furniture was kept as is; other pieces were refurbished. The homeowners estimate that approximately 50 percent of the furniture in the redesigned home is new and 50 percent pre-existing. “I tried very hard to incorporate items that had special value to the homeowners,” Rifkin says. “In addition, I believe in reuse and adaptability.”

One such example of Rifkin incorporating the clients’ existing furnishings into the new design is the breakfast area next to the kitchen, where a table the couple already owned stands on a colorful ethnic rug that Rifkin had moved from the family room. This rug was the couple’s first significant home-furnishings purchase made together, and they asked Rifkin to incorporate it somehow. She decided its colors were perfect in the breakfast room, which connects the kitchen and the living room in an open concept.

An important part of the kitchen redesign was the installation of what Rifkin calls “different levels of light,” including LED lighting behind the shelves and “toe lighting” at floor level. The various types of lighting help make the space much more conducive to cooking, according to the husband.

The sunken living room, which adjoins the breakfast area next to the kitchen, originally had a brick fireplace and a two-toned wooden floor with a darker inlaid “racing” stripe tracing its perimeter. Rifkin re-thought the fireplace, covering it with horizontal slabs of faux stone. Replacing the inlaid floor was a challenge, but Rifkin came up with the idea of painting it dark gray and topping it with a sisal rug. According to the client, this approach represented a cost savings of thousands of dollars against adding carpet or a new wood floor—and the results look great as well.

One item that Rifkin very much wanted to retain was a large, curved couch that embraces the living room. The couch was originally covered in leather and suede, but has since been redone in a textured taupe fabric blend that was chosen to handle the wear and tear of a busy family. Two new, dark-wooden fretwork chairs—selected with care by Rifkin—provide a graphical contrast to the neutrals in the room. “Sometimes furniture is sculpture,” she says.

The separate dining room features striking, domed light fixtures over the table and the clients’ old, leather parsons chairs re-upholstered in a variegated green chenille. An armoire, purchased by the homeowners as part of the redesign, was hand-painted by Cheryl O’Donnell, of COD Decorative Painting in Bedford, in a shade of green Rifkin selected to coordinate with the chair fabric.

A comfortable den/family room, with a new couch for watching TV, now has wall coverings of beige-colored grass cloth imbued with a hint of metallic sheen as well as gray-painted wainscoting. A landscape painting by Thibeault hangs over the couch.

O’Donnell painted gray over the existing beige-colored grass cloth on the walls of the foyer and stairway hall. Another interesting wall covering is in the downstairs powder room, with wallpaper featuring floor-to-ceiling birch-tree trunks.

Rifkin helped the couple redesign the upstairs rooms and the basement, which has game tables, a TV, an exercise room and a sauna. Rifkin redid the basement walls in beadboard and faux stone, and personalized the space with black-and-white versions of family photographs in frames that stand out from the wall in high relief. Rifkin also used some areas in the basement to display the son’s numerous golf trophies and medals to best advantage.

As redesign projects go, this one seems to have been particularly harmonious, with the clients referring to Rifkin as a “rock star,” and she referring to them as “gifts.” Rifkin says the Bedford homeowners gave her free rein. On her part, she respected their specific wishes, incorporating valued pieces of furniture into the overall scheme and also figuring out ways to highlight the clients as individuals. For example, she incorporated some golfing references throughout the house, including a golf club handle on a sliding door into the TV room.

When asked for advice on a redesign, the homeowners say: “Find the right type of designer and trust their judgment. Don’t try to micromanage the whole process. Give them the freedom to do what they do best. Trust is key.”

Rifkin concurs. “When there is mutual respect,” she says, “it makes it all much easier.” 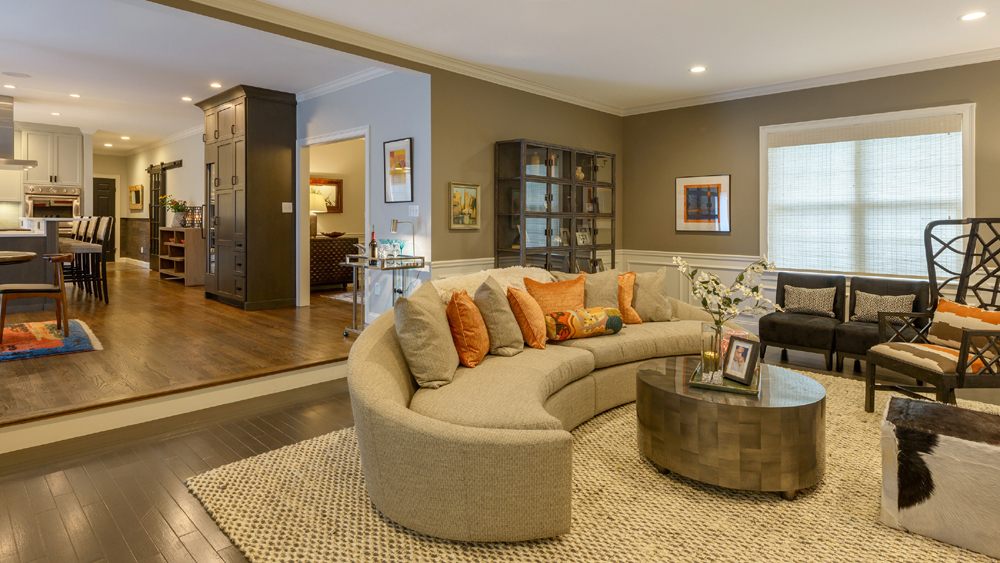 The sunken living room (in the foreground) opens up to the breakfast and kitchen area. The small painting to the left of the cabinet is by Agnus Destrempes; the print to the right is by Christine Destrempes. 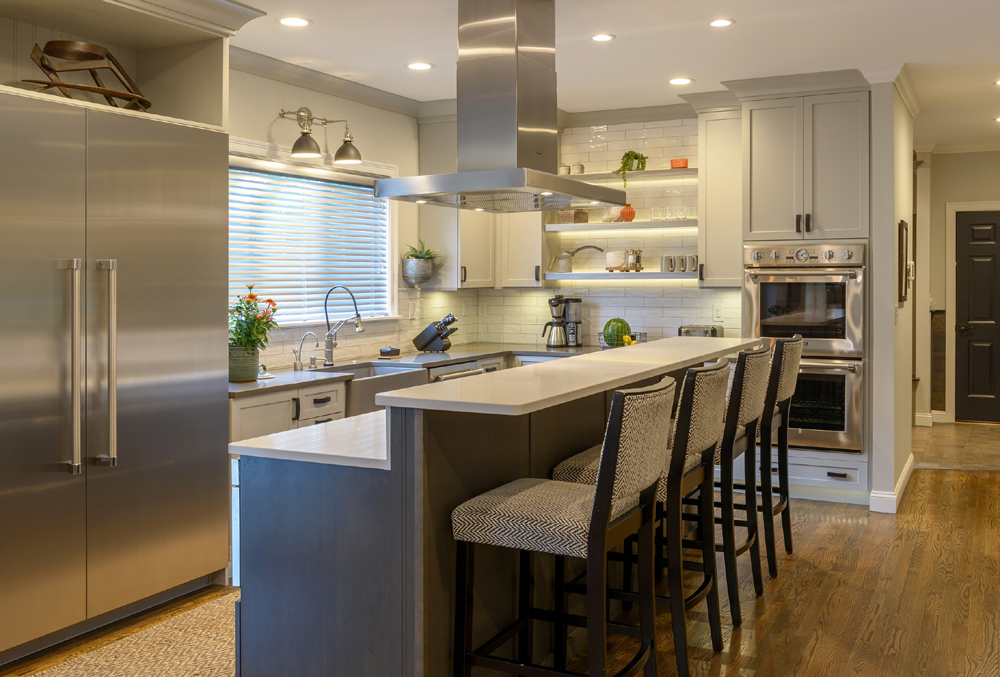 A new, streamlined kitchen features an island with countertops at different levels—one for dining and one for food preparation. 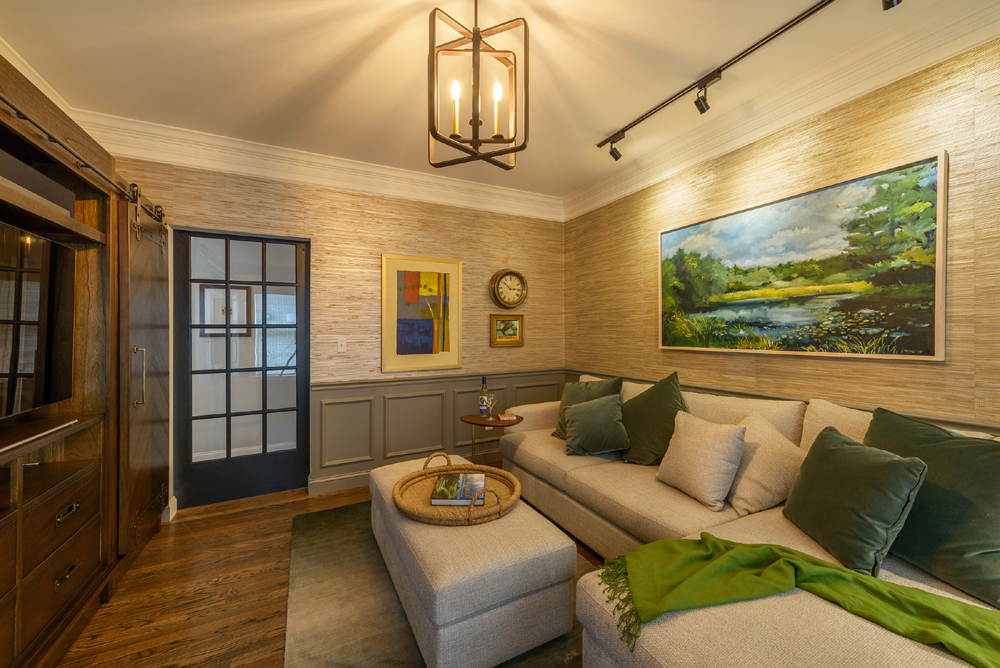 The family room has comfortable couches for relaxing or watching TV. A large painting by Daniel Thibeault, a Peterborough artist, hangs over the couch.  The prints to the left and under the clock are by Christine Destrempes. 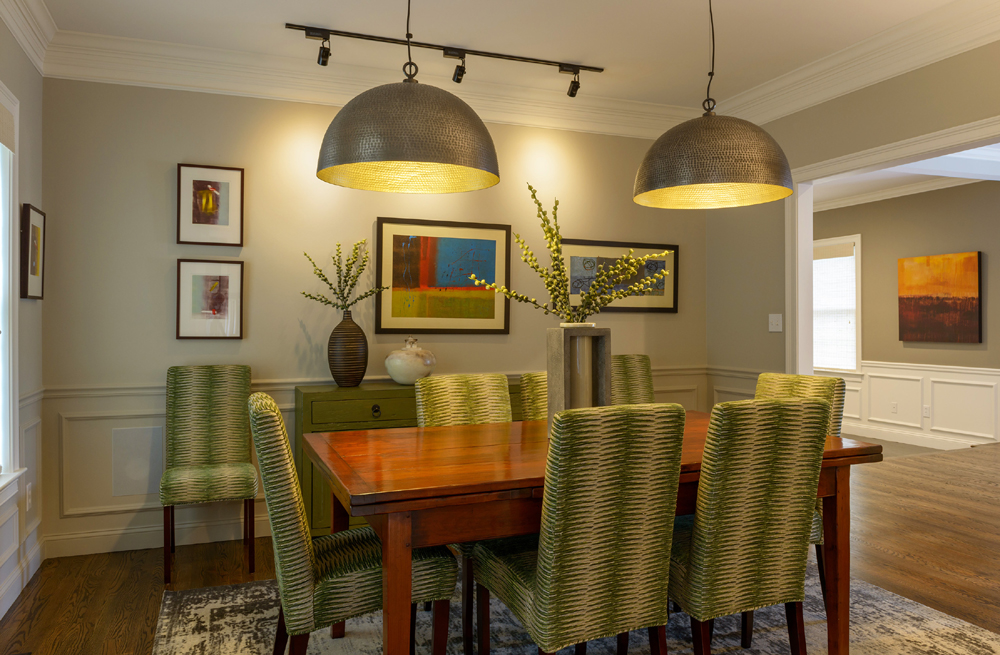 Leslie Rifkin re-upholstered the couple’s dining room chairs in a striking green chenille.  All the prints are by Christine Destrempes.
Designer Leslie Rifkin of L. Newman Associates in Manchester, employed a neutral backdrop throughout the house in order to let the artwork stand out, as it does in the foyer and stairway. The works of art over the bench and also along the stairway are monotypes by Christine Destrempes, the husband’s mother.
Categories: Architecture and Interiors