An Artist's Oasis in Cornish

Noted for their beauty, Stephen Parrish’s early twentieth-century gardens in Cornish have been revived—thanks, in part, to the painter’s detailed journals. 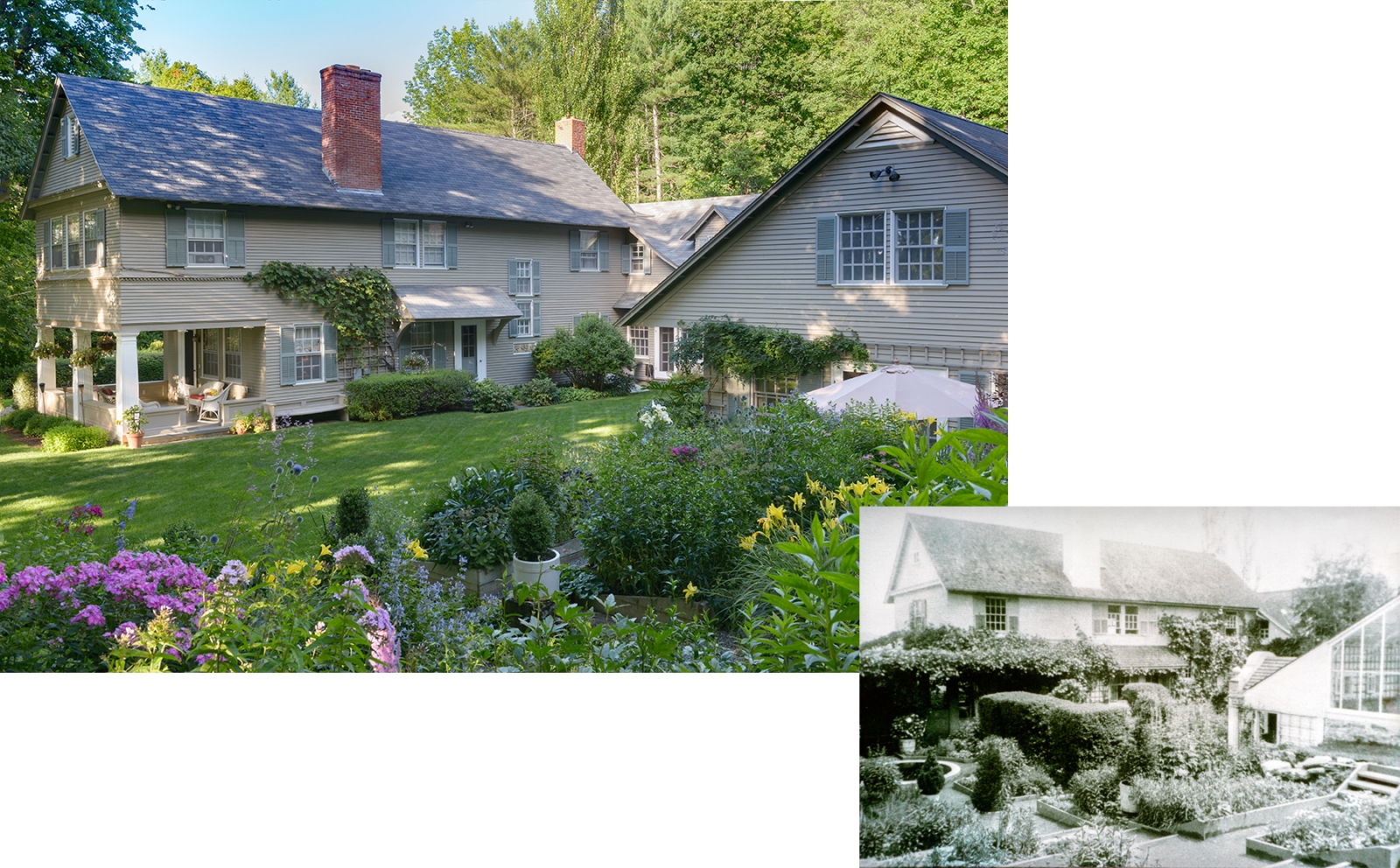 The gardening bug has bitten many of us, and one of its more noteworthy quarries was landscape painter and etcher Stephen Parrish. He fell in love with the pastoral beauty of Cornish when he visited landscape architect Charles Platt, who was his student and had a summer house there [see The Evolution of a Notable Landscape in New Hampshire Home, May/June 2016]. In 1893, Stephen bought eighteen acres near the Platts and built a house on the property he named Northcote.

Stephen spent the next ten years working on the gardens that were “considered by many to be the most distinctive of all the gardens in an artists’ colony that was becoming known for gardens,” says garden designer Bill Noble of Norwich, Vermont, who was hired in 1989 to bring Northcote’s gardens back to life.

In the years after Stephen’s death in 1938 at age ninety-two, what had been an open, sunny hillside had become a shaded woodland. The flowerbeds he had so lovingly nurtured were overgrown with shrubs. Near Stephen’s studio, the area he called The Boulevard was “a tangle,” Noble says.

In the late 1960s, after the Parrish family sold the property, a vinyl swimming pool had taken the place of the sunken lily pool that Stephen built in 1903. Back then, Noble wrote in a 1992 article on Northcote, “cascading annuals and clusters of blue Otaksa hydrangea reflected on the surface of the lily pool and then up through the colorfully planted raised beds bordering the steps and out across a small orchard of apple trees on the lawn.”

Thanks to the current homeowners, Bob Gordon and Marjorie Mann, and the efforts of Noble and his colleague Susan Howard in East Thetford, Vermont, the grounds of Northcote have been brought back to life. “The work feels purposeful,” Howard says. “We are perpetuating Stephen Parrish’s vision through the loving stewardship of Bob and Marjorie. This makes Northcote a fascinating place to work.”

The beginnings of Northcote

At age thirty-one, after a successful business career in Philadelphia, Stephen began studying etching and painting. His work was well received, and he exhibited in New York, Boston and Philadelphia as well as in London, Paris and other cities in Europe.

One passion Stephen could not indulge in Philadelphia, though, was his love of horticulture. So he was drawn to Cornish, both for its beautiful countryside as well as the artists with homes and gardens there. This community included painters Thomas Dewing and Maria Oakey Dewing; sculptor August Saint-Gaudens; and landscape architect and painter Charles Platt. Stephen’s more famous son Maxfield followed his father a few years later, and built a house, studio and walled gardens nearby. 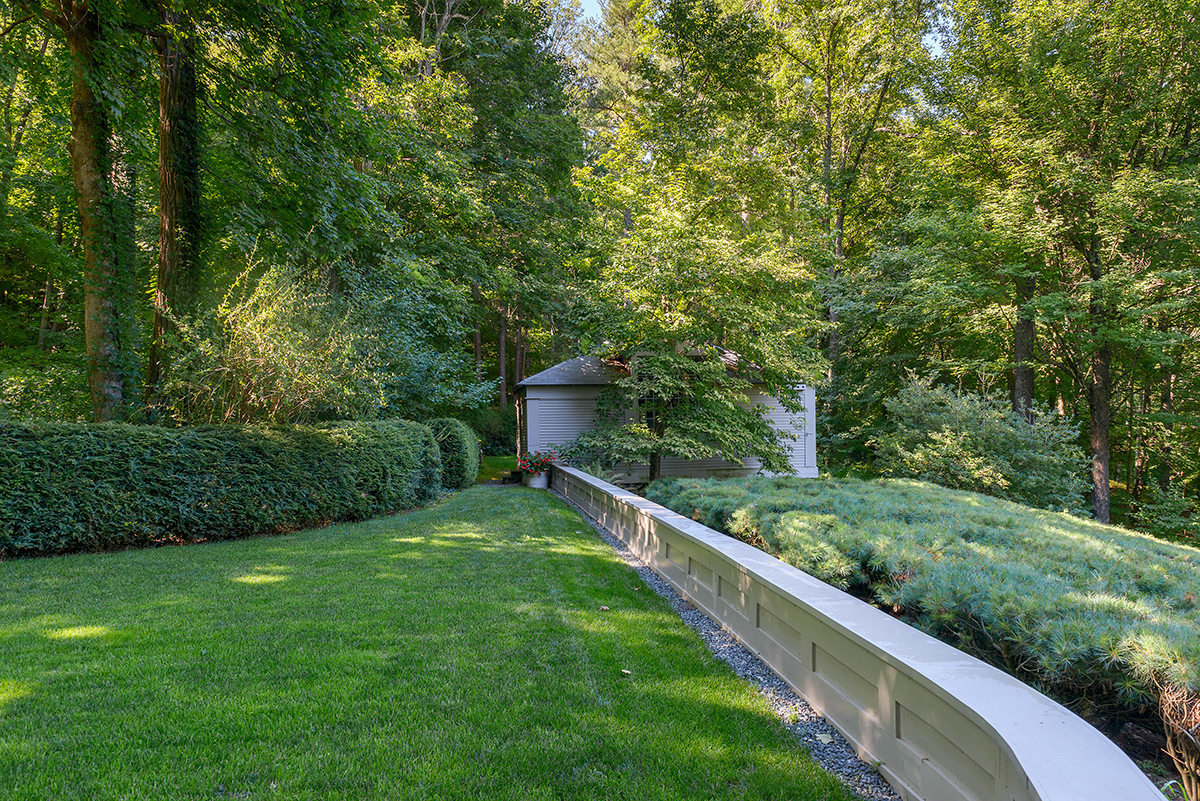 The parapet wall that leads to Stephen Parrish’s studio was rebuilt according to its original design as determined by photographs and existing similar walls.

Platt helped define the style of gardening in Cornish, recognized as one of this country’s most beautifully landscaped towns in the early part of the twentieth century. His style blended Italian classicism with Colonial Revival-inspired perennial plantings. Houses were closely connected to gardens; indoor-outdoor areas framed the view; gardens were laid out on axes. As in Tuscany, the building sites in Cornish were challenging. “The genius of the Cornish gardenmakers was their understanding of the landscape,” Noble says. “Their gardens were an outgrowth of the site, not only accommodating existing apple trees but also using the materials at hand, such as local stone and native white pine.”

From 1893 to 1910, Stephen kept a detailed garden journal. His notes include information about the weather, birds, each day’s activities, purchases for the garden, plant lists (including what did well) as well as correspondence about gardening and clippings. Stephen also included notes about what he painted and who came to visit. His niece, Anne Bogardus Parrish, continued to live at Northcote after her uncle’s death; when she died in 1966, she left her uncle’s garden journals to Dartmouth College. “Northcote is the best documented of all the Cornish gardens,” Noble says.

Noble says that one entry in Stephen’s journal, from July 2, 1903, is telling: “Painting in studio all day. Have taken it up again after years of neglect.” That was because he’d spent the majority of his efforts during the preceding ten years creating his gardens. Not only did his garden garner local attention—it was photographed and written about in House and Garden, The Century Magazine and Country Life in America—it was also published in two influential garden books, Guy Lowell’s American Gardens and Louise Shelton’s Beautiful Gardens in America. Garden plans appeared in a number of publications. Stephen did many paintings of the garden, and Maxfield took many photographs. 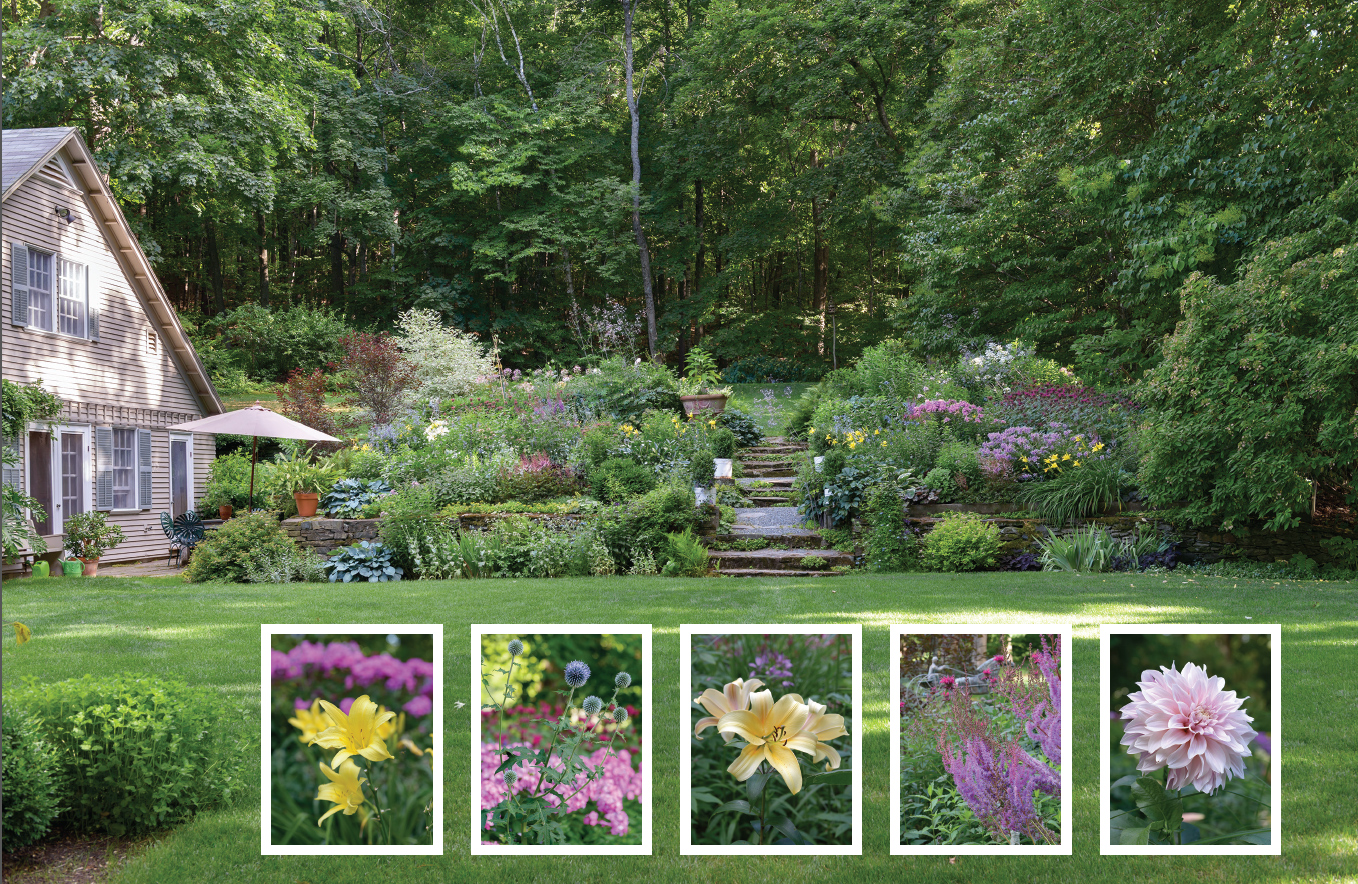 Among the projects Stephen undertook was planting a hemlock hedge that led from the stable to the house. A Lombardy poplar at the corner of the house marked its formal entrance. The house—with its porch, pergola and greenhouse—enclosed the garden on three sides. A low wall and hedge ran along the fourth side. Vines grew on the house and pergola, and raised beds overflowed with trees, shrubs, bulbs, perennials and annuals (Stephen grew annuals in his greenhouse). Other plants found homes in tubs and terracotta pots. Azaleas, tree peonies, clethra, roses and hydrangea were planted throughout the beds. Peonies, iris, delphinium and phlox added color, while annuals—such as alyssum, nasturtium, centaurea and asters—filled in the spaces.

“On this garden canvas framed by the architecture of the house and its attachments, Stephen painted in broad swaths of color against the flattering textures of wood, stone and sheared foliage,” Noble says.

In 1903, Stephen removed two of the rectangular flowerbeds in order to build a nine-foot-wide, round, sunken lily pool. He eventually removed the water lilies from the pool because they interfered with the reflection of the garden on the water’s surface, Noble says. 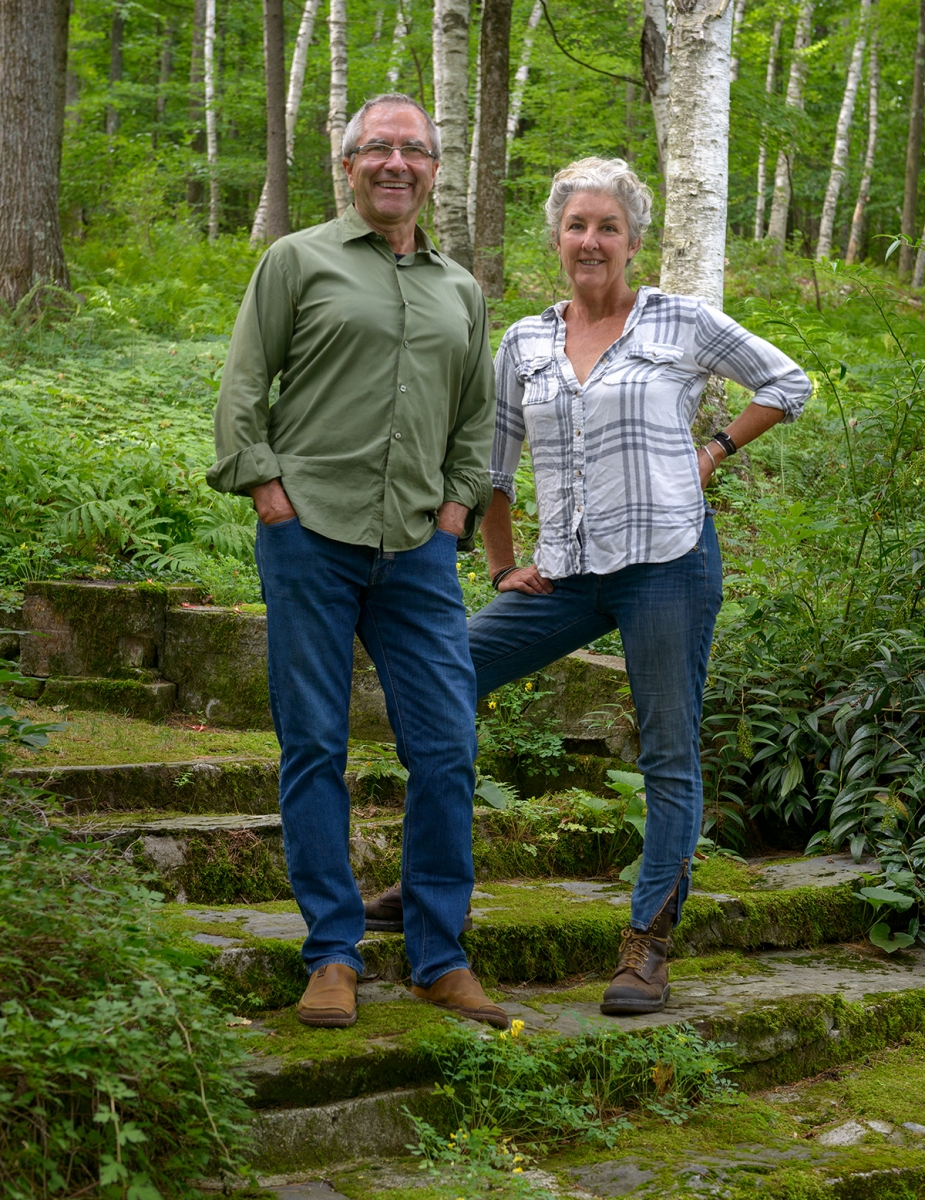 Bill Noble and Susan Howard stand on the steps leading to The Boulevard.

Beyond the house, Stephen planted hundreds of deciduous trees and shrubs on the hillside; as they grew, he cleared paths through their branches. Not only did this protect the landscape from westerly winds, but it also screened the two studios from the house. Pines were planted down the slope and were eventually topped, which created a tall ground cover. From various nurseries, Stephen ordered large quantities of trees and shrubs to plant for hedges, windbreaks and orchards; he also transplanted shrubs from the woods.

In a five-year period in an area of the garden he called The Boulevard, Stephen built a series of masonry walls and stairs into the hillside. Here, shrubs and perennials were planted together in a style different from that in the flower garden. The setting can be seen in Stephen’s painting, Garden Steps at Northcote, on page 61.

Also in this part of the garden was a weather-beaten old pine tree whose branches stretched across the path. Stephen built a circular wooden bench near this tree, and would bring out a table to enjoy tea or supper—along with sunsets and views of the Vermont hills.

After Stephen’s death, his plantings grew unchecked. Shrubs overwhelmed the garden; the pine hedges he sheared every June grew to seventy feet in height; the great old pine tree was reduced to a rotted stump. But the masonry walls and stairs of The Boulevard remained, as did the other stone walls near the house. Although the perennials in the flower beds were overtaken by other plants, Stephen’s journal with his detailed plant lists, along with photographs and paintings, provided an invaluable record of what had been there.

When Gordon purchased Northcote in 1984, there were no flowers growing in the garden. A vinyl swimming pool stood where the lily pond had been (Gordon replaced that with lawn early on). There were some of Stephen’s paintings in the studio, and the former owners had left a copy of Stephen’s journal. The real work began when Mann came into Gordon’s life a few years later. “She knew Northcote’s history and realized immediately there was more to the gardens here,” he says.

One day in 1989 while visiting the nearby Saint-Gaudens estate, Mann heard Noble lecture about the garden restoration work he was doing there—he had started in 1986 by restoring the pine and hemlock hedges, and was then working on the flower gardens. “When I came home, I told Bob I was going to call Bill,” Mann says.

Coincidentally, just before receiving her phone call, Noble had given a lecture at the Arnold Arboretum, at Harvard University, on Saint-Gaudens’ gardens and showed a slide of Northcote. “A woman raised her hand and said she knew the owners,” Noble says. “Marjorie had called at the perfect time.”

Mann says Noble soon became a “constant presence” at Northcote, reinvigorating the gardens near the house and near The Boulevard, repairing brick and stonework, and clearing out what had become overgrown. “We needed Bill’s expertise to figure out what to do and how to do it,” Mann says.

A Place of Beauty: The Artists and Gardens of the Cornish Colony by Alma M. Gilbert and Judith B. Tankard.
Published by Ten Speed Press, 2000

Italian Villas and Their Gardens by Edith Wharton, with illustrations by Maxfield Parrish.
Published by Rizzoli in 2008

Before he began, Noble did his homework. At Dartmouth, he found Stephen’s garden journals, plant lists and correspondence with nurserymen, along with Maxfield’s photos of the garden. “Even though we knew we weren’t going to fully restore the garden, I wanted our work to be informed,” Noble says. “The journals helped me understand what Stephen was after and what materials he used.”

From these journals, Noble created plant lists that would make the flower garden feel like Stephen’s, but could be adapted to the changed landscape and be easily maintained by Gordon and Mann. “Northcote had become a challenging site for a garden,” Noble says. “The surrounding Norway maples robbed the garden of moisture and shaded it for half the day. Some of the Cornish plants refused to work, and others got too gangly. We knew we couldn’t plant big trees and tackle projects we couldn’t keep watered.”

Initially, Noble was still working full-time at Saint-Gaudens, so he brought in other gardeners to help him. One was Sue Howard. “She has been the mainstay of the garden ever since, overseeing its maintenance and evolution with the help of two part-time gardeners,” Noble says. Every year, Howard brings Noble back for a consultation.

“I love this garden’s connection to history,” Howard says. “I often think of Stephen Parrish and how he’d approach things. I try and nurture his vision, as well as address Bob and Marjorie’s love for the property and the specific needs of their life here today.”

Howard also loves the collection of plants in the garden, and has been experimenting with woodland ground covers and various other plants—both native and historical—that can tolerate the site’s conditions.

“Stephen Parrish was a plantsman and an artist, and he also experimented with his plantings,” Howard says. “He studied what did well, and made choices that were both artful and horticulturally sound. Stephen’s eye as a painter made this garden more than a collection of plants. Bill—with his keen sense of design and knowledge of history, was able to interpret—which makes Northcote still an outstanding garden today.” 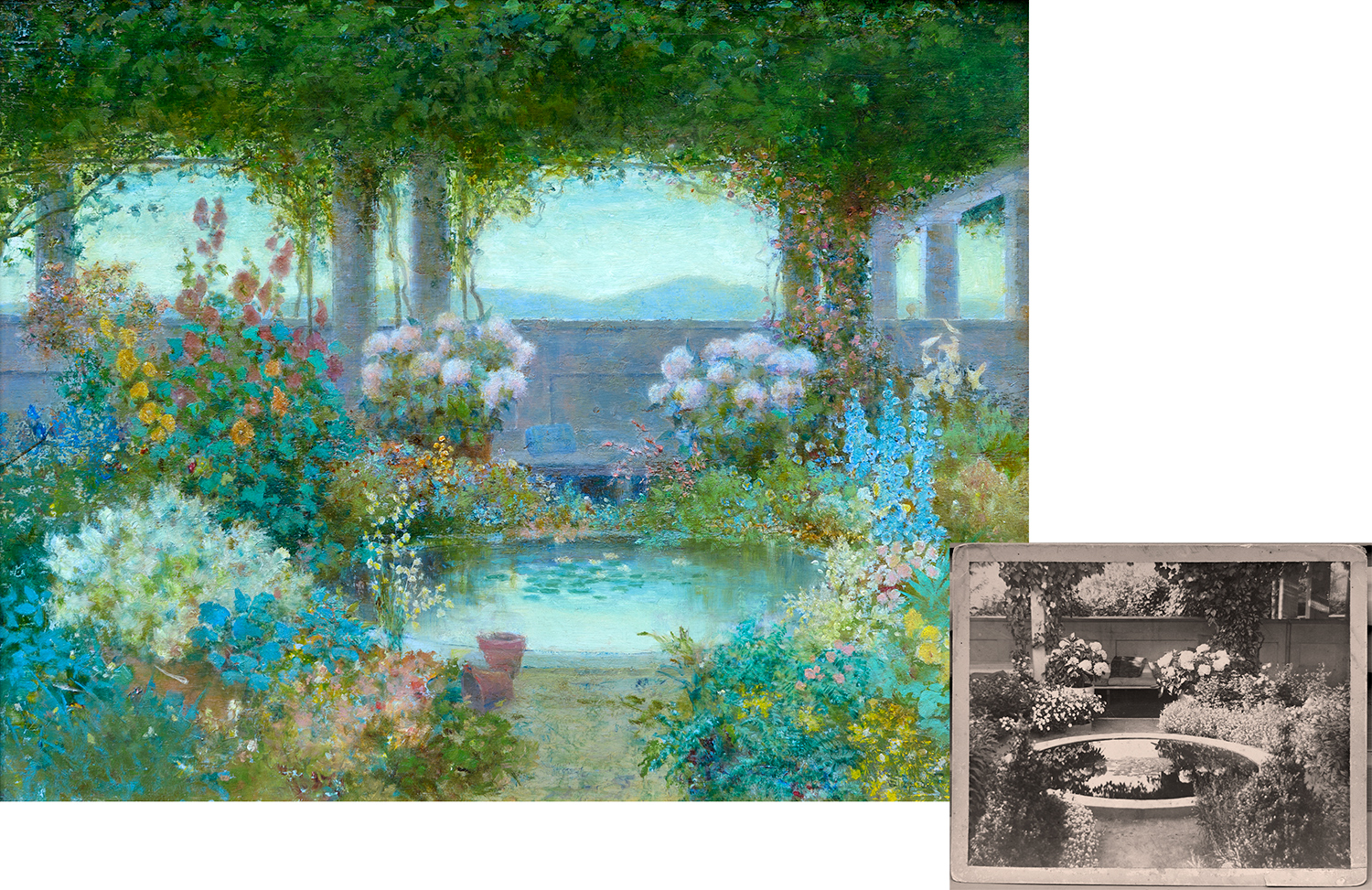 Stephen Parrish’s painting (above) and the photo- graph (near left), which could have been taken by Maxfield Parrish, show the pergola that was added as an extension of the house and the lily pool. Neither the pergola nor the lily pool exist today.
Categories: Gardening & Landscape, Notable Homes & Homeowners