An artist's retreat in Cornish

The country home, studios and gardens created by Gilded Ag e sculptor Augustus Saint-Gaudens welcome visitors much as they did more than a century ago. 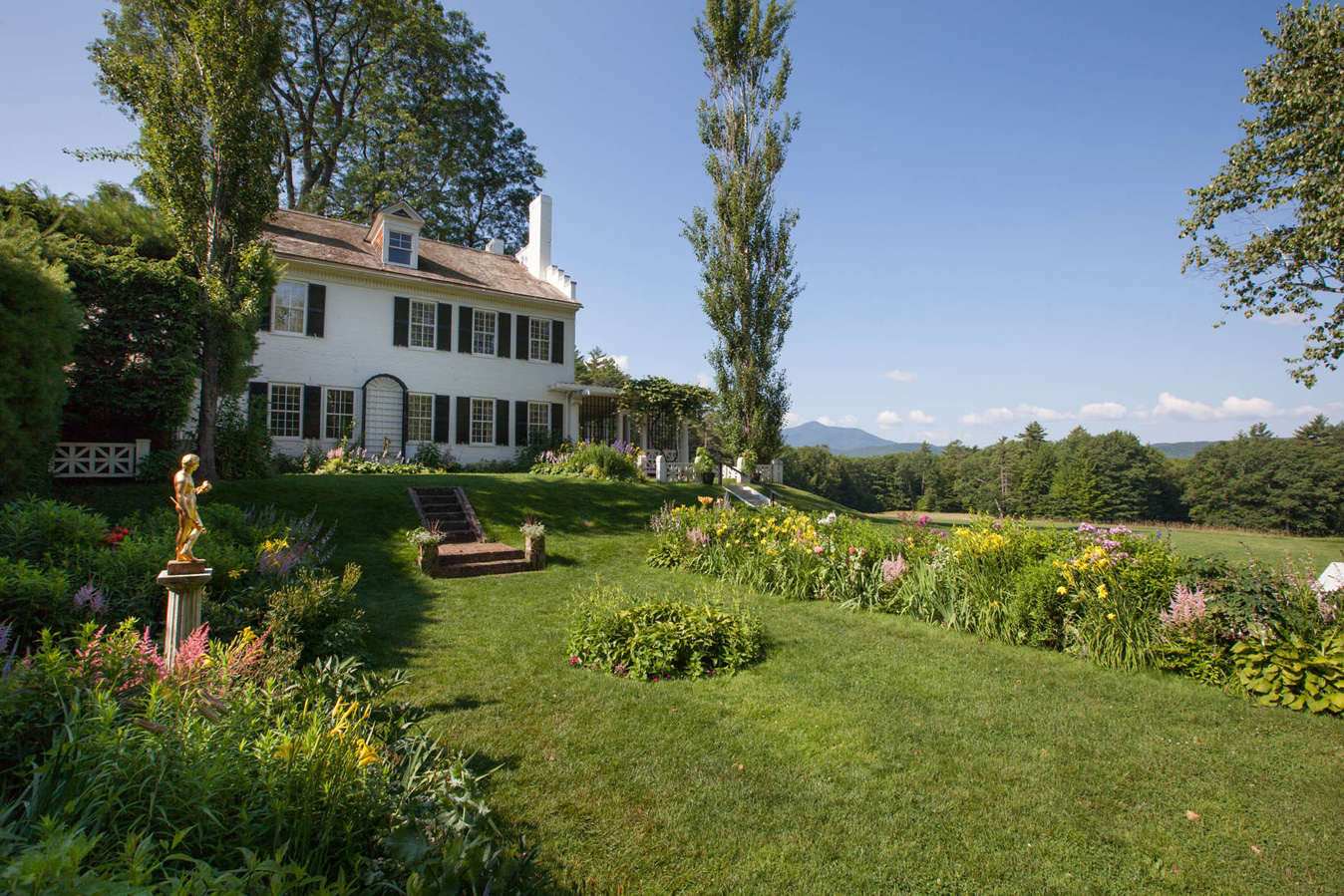 The Cornish home of sculptor Augustus Saint-Gaudens provides a rare chance to see how a late-Victorian artist lived when he wanted to relax among friends and family. Saint-Gaudens occupied his country property in western New Hampshire during the last years of the nineteenth century and the early years of the twentieth. "It was a single room, thirty feet by thirty feet," he says, "with no flooring, just ancient shag carpeting thrown over the subfloor. It was a mess, but it had the most magnificent hand-hewn beams and open staircase. Those timbers sold us on the house. The joinery had a Japanese feel to it, and we designed our house and garden around that."

Fellow artists from various disciplines followed him to the area, eventually settling in such numbers that Cornish became a de facto art colony. "It just kind of happened," says Henry Duffy, curator at the Saint-Gaudens site. "It wasn't planned, like the MacDowell Colony in Peterborough, for example." In all, more than 75 sculptors, painters, writers, musicians and public figures lived and worked in the Cornish area during the Gilded Age (roughly the late nineteenth century). If these artists were not all directly led there by Saint-Gaudens, their presence had something to do with his role as a taste setter and the first prominent artist to discover the special beauty of this part of New Hampshire.

Saint-Gaudens began spending summers in Cornish in 1885, making alterations to the house and grounds almost from the very beginning. In 1900, after being diagnosed with cancer, he lived full time at the estate he'd named Aspet for the last seven years of his life. There, he continued to work, teach, entertain guests and, beyond a doubt, enjoy the beautiful surroundings with a view of Vermont's Mount Ascutney in the distance.

Those surroundings are now a National Historic Site with woodlands, fields, flowerbeds, hiking trails and outdoor sculpture gardens. Visitors can tour the house where Saint-Gaudens lived, view the terraced gardens he designed to resemble those of the Italian countryside and see numerous works of art. On the grounds and in the studios are more than one hundred pieces by Saint-Gaudens, ranging from large public monuments to portrait reliefs and coins.

The artist in residence

Due to the foresight of Saint-Gaudens's widow as well as to the Saint-Gaudens Memorial, incorporated in 1919 to maintain a living commemoration to the artist, the property is in many ways what it might have been when Saint-Gaudens lived there. And while it's entirely possible to enjoy the property's beauty without knowing anything about Saint-Gaudens, understanding his background enables a deeper appreciation. It is hard to equate Saint-Gaudens's status during the late Victorian age to anything similar in the present day. He was a sort of high-class bohemian, whose commissioned works (which include monumental sculptures in prominent locations) received high acclaim in his lifetime.

"In 1900, he was very well known in this country, but memory of him has faded somewhat," says Steve Walasewicz, chief of resource management and maintenance at Saint-Gaudens. However, in recent years, exhibitions of his work around the country have begun to bring his art back in the public eye.

Many of his master works remain, including the twelve-foothigh bronze statue Abraham Lincoln: The Man, known as Standing Lincoln," in Chicago. Saint Gaudens's Lincoln, head bent in contemplation, is the picture of the former president many of us carry in our minds even if we aren't aware of the artist who sculpted it. Other Saint Gaudens works include the bronze bas-relief for the Robert Gould Shaw Memorial on Boston Common, a statue of Civil War Admiral David Farragut that stands in New York City and a highly regarded "double-eagle" design for a $20 gold piece that he crafted in the last years of his life.

Visitors are welcomed at the Aspet property daily from late May through late October. The buildings are open from 9:00 a.m. to 4:30 p.m., and the grounds until dusk. A visitors center, open year-round, shows two movies about Augustus Saint-Gaudens’s life and offers information about the artist and the site. The house can be visited by guided tour only.

The Saint-Gaudens Memorial works in partnership with the National Park Service and sponsors many of the on-site activities, including the sculptor-inresidence program, exhibits and a summer concert series. More information about programs, and about Saint-Gaudens and his life, may be found at sgnhs.org.

Saint-Gaudens was born in Dublin, Ireland, and raised in New York City. He trained and studied in Europe, but received his first major commission, the Farragut statue, in the United States.

Saint-Gaudens was also a dedicated teacher and mentor, and countless artists were inspired by him and by his work as a painstaking figurative artist. He was worldly and well-connected-a friend and sometimes-collaborator of his was the architect Stanford White-but he was also a hard-worker whose artistry flowered in the quiet of his New Hampshire home.

Saint-Gaudens and his wife, Augusta, first visited the abandoned Georgian-style house in Cornish in 1885. It was in March, during mud season, and the artist was not impressed. Augusta, however, liked it, so the couple began renting the property.

Saint-Gaudens soon found he could work well in the country. "There was less noise and interruption," Duffy says. "It was a more relaxed lifestyle than, for example, Paris or New York [where Saint- Gaudens had also lived]."

That wasn't to say he didn't make some changes (he eventually purchased the property). The twin-chimney house, built in the early 1800s, was in the Georgian style, with a center hall and rooms on either side. Saint-Gaudens, as a classical artist, sought a more Italianate look for the exterior, Duffy says. Saint-Gaudens added terraced gardens, put porches on either side of the house and painted it white.

The interior was not redesigned in the same classical manner, but Saint-Gaudens replaced the straight Georgian staircase with a French-style curving staircase and removed walls between some rooms to open up the space.

One of the porches was designed to become an extra room in mild weather. "People talk these days about 'outdoor living,' but Saint-Gaudens and his wife were already doing that," Duffy says.

Toward the very end of Saint-Gaudens's life, a sunroom was added off the bedroom, with French doors all around, so that he could still enjoy the outdoor light. "I also think this makes the house more akin to what we know now in terms of making changes to fit the lifestyle," Duffy says. The idea was not to impress others, but to design to the homeowner's personal taste and needs. Aspet's furnishings were somewhat eclectic, at least as compared to Saint-Gaudens's city homes, where "everything would have been up to date and in one style," Duffy says. Chippendale and Sheridan pieces from Augusta's Boston relatives shared space with European and Asian style furniture the couple had acquired. "This mixture was very typical of a bohemian taste in the late nineteenth century," Duffy says.

Most of those furnishings can be viewed on guided tours of the first floor of the house. All the rooms appear as they did when Saint- Gaudens lived there, so it is possible to stand amid the same surroundings that the artist and his family assembled for themselves.

As lovely as the house and the views of the countryside are at Saint-Gaudens, it is easy to be distracted by the gardens. These include a series of terraced beds off the back of the house, with hedges forming shapes to delineate different areas and levels. Some of the hedges create rooms in which sculpture is the focus. Saint-Gaudens designed the terraces, which are so steep that they are not easy to mow, notes James Haaf, the gardener for the Saint- Gaudens site. The lower terrace of the gardens consists of two long beds that are mirror images of each other (in terms of shape but not plantings) separated by lawn. The middle terrace features two beds, one of which surrounds a statue of the Greek god Hermes, purchased in Italy by Saint-Gaudens. A single flowerbed occupies the top terrace at the rear of the house.

It is safe to assume that the basic layout is still as the artist would have wanted it. "We have photographs of him with wooden laths laying out the beds on the lawn," Haaf says.

While the overall geometry of the gardens would have been up to the man of the house, what went into the gardens was the purview of his wife-at least, her name is on the seed orders. "This was a typical labor arrangement for Victorians," Haaf says.

In addition to the terrace beds, there is a second garden at Saint-Gaudens that is used mainly for cut flowers. In the artist's day, this was a vegetable garden, and it still has remnants of rhubarb and asparagus. "These are very long-lived plants and could have been from Saint-Gaudens's time, but we don't know for sure," Haaf says.

In terms of what is planted in the cutting garden, the terraces and elsewhere on the property, Haaf makes an effort to be true to the period but points out that it isn't possible to know exactly what was planted where 120 years ago. Clumps of peonies appear in some old photographs, as do hollyhocks along the bed near the pergola, and those flowers grow at Saint-Gaudens today as well. 'Golden Glow', a variety of black-eyed Susans, appears near the house in old photographs-"these are very distinguishable," Haaf says-and makes its appearance today as well. ('Golden Glow' was once missing from the gardens but has been replanted.)

Haaf looks for and uses old varieties whenever possible, but mainly he says he tries to evoke the sense of a Victorian garden: "very dense, with a feeling of abundance and not much bare ground. … I'll hear comments like, 'My grandmother had a garden like that.' This means more to me than just being historically accurate."

Tending older varieties has challenges, he notes, as flowers used to be leggier and more apt to fall over. "I would say between 80 percent and 85 percent of the plants now in the terraces are staked or tied," he says. "People will ask me, 'Why are your asters are so tall?' Modern plants are just shorter."

When visiting Saint-Gaudens, it is easy to feel that you're in another time-and not just because the plants are so tall. "People are amazed to find a site that has been largely preserved since Saint-Gaudens's lifetime," Walasewicz says. "It's also interesting because it's one of the earliest efforts at historical preservation in New Hampshire."

Yet in addition to being a kind of living museum, Saint-Gaudens is still a place for creative endeavors. Three studios on the grounds house different collections; the Ravine Studio is home to a sculptor-in-residence program for figurative sculptors who spend the open season from June to October working on their art and interacting with park visitors. Saint-Gaudens hosts art classes and concerts, continuing to be a cultural center in some of the same ways that it was during the Gilded Age. But this is also a place where you can do nothing more than bring a picnic, sit, and enjoy the flowers and the view-which is probably something Saint-Gaudens did as well.