High-tech fixtures inspire the transformation of a master suite.

Remember the Kohler television commercial where a home- owner hands an elegant faucet to a fashionably dressed, upscale architect and says, “Design a house around this?”

Well, yet another state-of-the-art Kohler product has inspired the owners of a Bedford home and their designer. This time, it’s an upscale, high-tech toilet that makes a statement with its design, features and functionality.

When homeowners Dr. Uri and Kerri Ahn initially set out for a simple remodel of the outdated bathroom in their master bedroom suite, they chose the Kohler Numi multi-function toilet for their renovated, spa-like bathroom. And this commode is no joke.

“The Numi toilet is Kohler’s version of the ultimate toilet—it does everything,” Uri says. This high-tech, super sleek, energy-efficient toilet is equipped with automatic sensors that open the seat upon approach, backlighting, a heated seat, a foot warmer at the base, automatic flushing and deodorizing, and even the ability to play music via Bluetooth-enabled devices.

“It is very sleek, almost with an Asian/modern design. It has all the gadgets, but they are concealed,” Uri says.

The toilet, with its clean lines, fit with the homeowners’ design desires for a spa-like, soothing, yet functional theme for the master bathroom. Design inspiration came in part from the modern Asian design of Boston’s W Hotel, where the Ahns have stayed in the past.

At first, the homeowners intended to update only the bathroom on their own, but after consulting with Cynthia Shreve, a designer with Goedecke Flooring & Design Center in Bedford, the Ahns decided to utilize her expertise and resources for a larger-scale remodel of the adjoining walk-in closet/dressing room and master bedroom that features custom built-in cabinetry to replace free-standing dressers and an armoire.

“We told her we really needed a ‘Candice Olson’ [a celebrity interior designer featured on HGTV],” Uri says. “Cynthia captured our vision and took it to the next level. It’s incredible to work with someone like Cynthia with whom you can share conceptual ideas and have those ideas materialize. Putting a room together is an art and a talent—and she has that gift.”

For the bathroom redesign, Shreve removed all the existing features, such as the dated Jacuzzi tub, the sinks, toilet and shower. Instead of a tub/shower combination, the Ahns chose a dramatic, freestanding air tub in an almost egg-shape. Air tubs are different from traditional whirlpools in that they have small holes that jet a steady stream of air into the tub to create a soothing therapeutic stream of air bubbles. The air stream intensity can be adjusted, and the air tubs require less floor space because the pump can be located under a vanity or counter. The glass-enclosed shower is equipped with chromotherapy lighting, and its floor features a river-rock base that wends a path from the shower to the air tub. 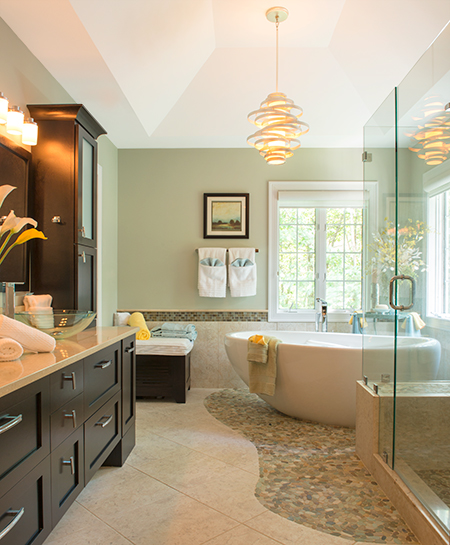 Custom wooden cabinets with an espresso stain and luxury fixtures—such as the air tub and a smart, unique chandelier—add sophistication. River rocks surround the floor of the egg-shaped air tub.

Other useful features in the bathroom are a terrycloth-cushion-topped bench, a counter with a nightlight, and an iPod dock and a recharging station for electronics. The bench offers a space where Uri can take medical emergency calls at night without disturbing Kerri or the couple’s two young children.

Double glass-vessel sinks were installed on the new quartz countertops. Shreve says there is plenty of storage included in the bathroom’s custom-made cabinets with a dark, espresso stain.

“Everything is very contemporary, very simple,” she says. A soothing, nature-inspired color palette was chosen: river rock in shades of soft, almost pastel, gray; creams and off-whites for the tiles on the floor and walls; and dark wood for
the cabinets.

Cabinetmaker Denis Lamy of Manchester built all the cabinets and storage units for the three-room makeover. Kerri says the design in the master bedroom’s closet/dressing room was inspired by the dressing rooms at Barneys New York.

“The dressing room is open with lots of space, storage and cabinets for clothes that we used to keep in several bureaus,” Kerri says. Her favorite feature is a velvet-lined jewelry drawer in the dressing room.

With new floor-to-ceiling cabinets and closets in the dressing room, the Ahns were able to remove several free-standing dressers in the bedroom to open up the space for that New York loft appeal. “Every piece of furniture was removed,” Uri says.

One long curtain rod and custom drapes make two windows appear to be one large window.

A tall, upholstered headboard was installed for the new platform bed. For the remodel, the only furniture that was bought were two different end tables from Ethan Allen, in a dark wood, and two large mirrors that lean against the wall. A bluish-gray paint color was chosen for the walls, and to top things off, a contemporary ceiling fan that resembles an airplane propeller
was installed.

“It looks like it’s from ‘The Jetsons,’” Uri says.

Kerri says the family doesn’t travel as much these days, but when they do, the accommodations can’t compare with the comfort and style of their redesigned master suite. “Now, whenever we do stay elsewhere, no place is as nice as our bathroom,” she says.

With the redesign and Shreve’s leadership, the Ahns achieved their goal for a great space to unwind and relax.

“We wanted the suite to become our everyday retreat—and it has,” Uri says.

View more photos from this story: