An energy-efficient, solar-powered home in Canterbury

Powered by the sun and heated with not one drop of fossil fuel, Ruth Smith and Beth McGuinn’s home reflects their commitment to sustainability and energy efficiency—and a passion to share their knowledge and home with others.

The two-story, 1,800-square-foot saltbox-style home, called FeatherLeaf Farm, has been opened to the public during several home and garden tours hosted by church, community and green building groups—both during and after construction.

“We’ve literally had hundreds of friends and strangers come through here,” says McGuinn, who produced a brochure with details about the construction, including a timeline, reading and resources list, and lessons learned during the ten-year process.

McGuinn—a trained forester who works as the executive director of the Five Rivers Conservation Trust that serves sixteen towns in the Concord area—says she read at least a dozen books on green home-building and that research came in handy when working with the builder and energy consultants.

“We wanted to build a green, energy-efficient home that would be accessible to people,” she says. “We want to show this is a house anybody can build. We didn’t want it to be a complicated science project.”

McGuinn and Smith launched their home project in 2004 when they purchased a four-and-a-half acre lot in Canterbury, a town they love. “This is a special town with people with similar values and a great location,” Smith says. “It’s a great community with a rural feel, with convenience to work.” (Smith works as centennial coordinator at the Audubon Society in Concord.)

The land was cleared in early 2005 with all the lumber set aside for future use. Logs were harvested, transported to a local sawmill, taken to a kiln facility for faster drying and then to a finishing mill, before being returned to Canterbury. McGuinn lists the tree species used: white pine, red oak, white oak, ash, gray birch, red maple, sugar maple, cherry, yellow birch and poplar.

Most of the floors are red oak. Pine was used for paneling; shelving units; closet doors and flooring; and the wood shed and the chicken coop. The stairway treads are oak with cherry kick panels and banisters. The spindles alternate between five key species: oak, cherry, poplar, birch and maple. Except for the sheathing, siding, framing, doors and windows, all the wood used to build the home was harvested from the site.

Milled hardwood lumber was used for trim and moldings as well as in horizontal paneling. The variations in wood grains, tones and striations became as much of a design element as selecting a paint color for an accent wall. “There is no painted wood in the whole house,” Smith says. “We wanted it all natural wood.” One of the “accent” walls with the horizontal paneling turned out “drop-dead gorgeous,” she says. Smith and McGuinn call it the “rainbow of wood.”

By January 2006, the framing, roofing, electrical, plumbing and much of the interior features—such as the kitchen counters, interior doors, oak floors and paneling—were completed. “We were really lucky we had contact with people who knew how and where to mill, kiln-dry and finish the wood,” McGuinn says. 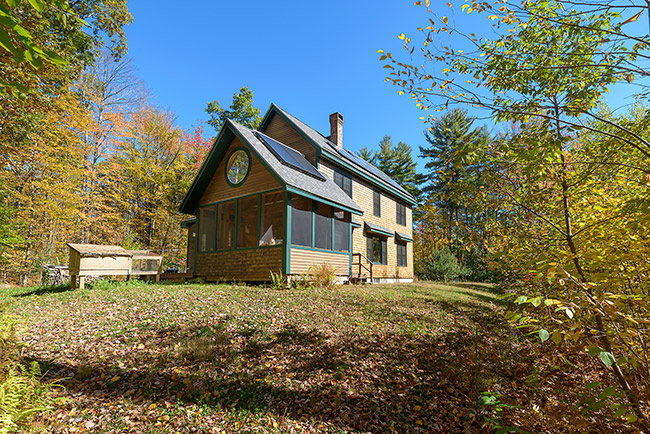 Two solar-energy systems were installed at the Smith-McGuinn home by ReVision Energy in Exeter. Two panels atop the porch are linked to the hot water heater, and the more expansive, sixteen-panel solar array on the roof generates more than enough electricity for the lights and appliances, especially on sunny days.

Heart of the home

The kitchen—within view of the centrally located soapstone woodstove with a chimney running up through the middle of the house and through the bedroom on the second floor—is the heart of the home.

“We designed the house around our kitchen,” McGuinn says. The layout in their old home was not conducive to entertaining. “We designed the peninsula counter in the kitchen were we can and do spend most of our time, chopping and mixing and cooking. But I have the ability to communicate with people sitting at the counter, in the dining room or living room, and see the friends coming through the front door. I’m no longer isolated.”

Solar panels create power to operate the Energy Star–rated electric stove and other appliances. The Smith/McGuinn home is classified as a “net zero energy” home because the total amount of energy used by the building annually is roughly equal to the amount of renewable energy created on the site. 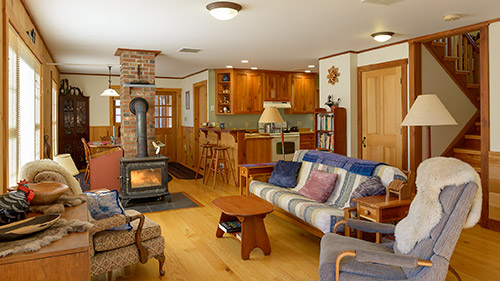 To maximize heating efficiency, the wood-burning fireplace was built in the center of the open-concept first floor.

What wood wasn’t used for building is now used to heat the home. On average, Smith and McGuinn burn from two and half to three and one-quarter cords of wood a year, and the home is so tightly insulated, it can maintain a temperature of between 60 degrees and 65 degrees in the winter even ten hours after the fire is built in the morning and left to burn all day. “We start the fire up again when we get home in the evening,” Smith says, “as the stove still has a bed of hot coals.”

“We have five and a half inches of blown-in cellulose insulation,” McGuinn says. “The first main feature of a green house is the insulation. That’s what makes it possible to heat with much less wood. One inch of rigid foam lined with foil (polyisocyanurate) over the exterior of the shell seals the air out, like a windbreaker.”

Orienting the home to the south, with the concentration of windows on the south side; highly rated insulation (about R-28); good windows with low-E coating; a centrally located chimney and woodstove; floor vents; and an open stairway contribute to the home’s net-zero energy rating. “We use only wood and solar, not fossil fuels, to heat our home,” McGuinn says.

Paul Leveille, a high-performance building specialist with the Resilient Buildings Group at the Jordon Institute in Concord, served as energy consultant on the project. Smith and McGuinn brought their design ideas to him, and he used energy-modeling software to predict different options based on the number of windows and other factors.

Modeling helped estimate the “plug load,” the amount of energy used by the appliances. “The most useful outcome of modeling is for understanding what the box of the house should look like, where the windows should be and what kind of windows to use, and for choosing heating and cooling systems,” Leveille says.

Working with clients well versed in green building was helpful. “From my perspective, it was a blessing,” Leveille says. “They knew what questions to ask. If every homeowner read as much on green building, we’d have better, tighter houses.”

One of the reasons Smith and McGuinn’s home is considered a net-zero building is that it produces more energy than it uses; that unused energy gets returned to the electric power grid and is used by neighbors. “The electric meter actually runs backwards,” Leveille says. “It means the utility’s power plant needs to produce that much less energy.”

Not only was densely packed cellulose installed in the exterior framed wall, a rigid foam with foil lining was used to prevent heat loss around the windows. Leveille says that, on average, New Hampshire homes lose one-third of heat through air infiltration. The rigid insulation Smith and McGuinn installed eliminated thermal bridging where heat transfers from the inside to the outside.

After researching a number of companies, Smith and McGuinn chose ReVision Energy of Exeter to install roof-mounted solar panels that generate the home’s electricity and a second system linked directly to the eighty-gallon hot water heater.

Heather Fournier, ReVision Energy marketing manager, explains that on a sunny day, when the sixteen solar panels generate more electricity than the homeowners require, the extra power is returned to the grid and reflected as a credit on their electric bill. The low-maintenance solar panels, made from tempered glass over silicone, are mounted securely to rails attached to the asphalt-shingled roof. Snow slides off easily in the winter, Fournier says, and there’s no need for cleaning.

Fournier adds that ReVision Energy has held several tours of the Smith-McGuinn home and the couple “practice what they preach” in both their home and professional lives. “Beth and Ruth are true champions,” Fournier says. “They have taken the time to learn about solar energy and sustainable living, and they share what they’ve learned with others.”

Bill Bartlett of Bartlett Builders, Inc., in Hopkinton collaborated with Smith and McGuinn from the beginning. “We designed the house together with Paul’s input,” Bartlett says. “[Smith and McGuinn] knew exactly what they wanted and researched the project like we all should be doing.”

Bartlett says his crews have built energy-efficient, solar-powered homes for many years, and he predicts the trend will continue. “You’re going to see this solar photovoltaic trend take off,” he says. With federal tax credits and state rebates available to homeowners who utilize energy-saving technology, Bartlett says building green is a “no brainer” in newly constructed homes. He doubles the building code requirements for insulation, for instance, to make thicker, tighter walls and attends seminars on the latest, greenest techniques and materials.

Solar photovoltaic (or “PV”) panels were installed at FeatherLeaf Farm in June 2012, and the solar hot water heater was installed in December 2011.

Bartlett says solar energy and so-called green building methods are not new concepts. When they were tried in the 1960s and 1970s, “those methods may have been thought of as outlandish ideas from hippies,” he says. But today, more people recognize the power available from the sun.

Building green also means less waste. “What I’m most proud of with Ruth and Beth’s home is that it is very green, very sustainable,” he says.