A woman’s lifelong love of her family’s homestead and her passion for Asian culture shape the design of her garden and screened porch.

After spending several months in Malaysia and Cambodia last winter-living in dusty tents, perched on platforms over flooded forests and hiding in blinds to photograph animals for the Wildlife Conservation Society-Eleanor Briggs is eager to return home. "I've got my roots here," she says.

Upon arriving at her rambling antique Cape-which is the oldest house in town, built by its first town clerk, Jonathan Bennett, in 1776-one of the first things Briggs does is check on her garden to see how things are growing. "I've been garden­ing since I was a child, learning from my mother," she says.

Combining near and far

The gardens surrounding Briggs's house and barn were laid out by landscape archi­tect Diane McGuire, of the landscape architecture firm McGuire & Watson in Rhode Island. "You can't have a good garden without a good client," says McGuire. "Eleanor is not only a conservationist, but also a plantswoman of distinction and a collector of Asian sculpture. She is especially interested in preserving native plants of New Hampshire and using them side-by-side with plants from Asia. This gives the garden an enchanting, exotic restfulness."

As part of the garden restoration, an ancient honeysuckle found on the property was used to anchor one of the flower borders; also, clumps of lilacs in front of the oldest part of the house were renewed. McGuire consulted many early American gardening books to be sure that plants added to the garden were in keeping with the philosophy of relating the wild and the cultivated. 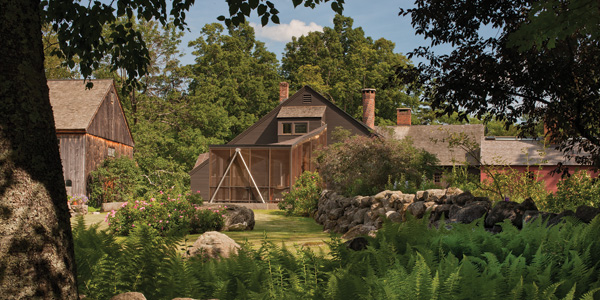 Looking back at the house from the shelter of the trees, the steel “swing set” armature supporting the porch roof is evident. Architect Daniel Scully’s design is simple yet elegant. The red ell on the right of the house was a separate Cape that Briggs’s grandmother had brought from the village and attached to the original house in 1939.

"For example," says McGuire, "the red cardinal flower (Lobelia cardinalis) grows naturally in the stream flowing behind the garden where the blue car­dinal flower is now a feature of the late summer border."

The woodland garden, which flanks the west side of the lawn, is filled with many native plants-such as snakeroot, ferns, mayapple, sweet woodruff and trillium-combined with a number of colorful, exotic azaleas.

The flower border combines a beau­tiful pink shrub rose (Rosa rubrifolia) with peonies, delphiniums, anemones, phlox and asters. The rose garden in front of the original Cape is full of heir­loom varieties.

"Since I first lived in the house, I have had a collection of antique roses which I love," Briggs says. The roses are located on each side of the original front door.

"This is a high-maintenance area," McGuire says, "because old roses need a watchful eye in order to look their best." Several varieties of nepeta form a groundcover under the roses and har­monize with the blue-gray of the rose foliage.

A large rectangular fish pond just off the kitchen addition is home to a mix of natives and exotics: koi and native frogs, lotus and water lilies. "It was Diane's idea to place the koi pond next to the house so that it became part of the architecture instead of being in the woods where I originally wanted to put it. The lotus and water lilies, as well as the golden fish, remind me of Asia," Briggs says. 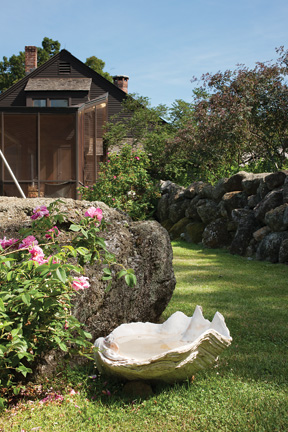 This huge clamshell makes a fine drinking spot for birds and other wildlife. Pink rose blossoms help to soften the rugged gray granite.

When Briggs decided she needed a screened porch, she turned to architect Daniel Scully of Keene. "He had reno­vated my kitchen and garden room, and now I wanted a screened porch but had no idea where to connect it to the house," says Briggs. "The house has evolved from a simple eighteenth-cen­tury farmhouse into a bit of a railroad train of styles."

Rather than just tacking another addition on to the rambling house, Scully designed a separate porch con­nected by a covered breezeway. "We needed something to loosen things up. It is like the wagging tail loosening up the rather stiff, traditional house," Scully says.

Instead of standard beams, the roof is supported by a stainless-steel frame, which Scully likens to a swing set. Rafters are rotated around it to create a warped plane, forming a trap­ezoid rather than a square box. Overall this approach gives the space an Asian temple feel.

"The roof is a story of transition from the standard pitch of the house roof to something with a more horizon­tal, perfectly calm look," says Scully. "Eleanor had the gutsiness and ability to envision it and go with it. Many own­ers of period homes are afraid to break from tradition, but she knows that life is richer than that."

Briggs loves the new porch and says of Scully, "His placement was brilliant, as is the aesthetic!"

Briggs has a large vegetable garden next to her barn. "This garden is way too big for one person, so I share a lot of pro­duce. I have raspberries, some originally from my grandmother's garden; many kinds of vegetables; herbs from Asia; and of course, a long row of rhubarb."

Briggs also has a large cutting garden to provide fresh bouquets for the house, and she has planted two peach and two pear trees at one end of the vegetable garden. "Roger Swain [a fellow dedi­cated gardener and former host of the PBS series, The Victory Garden] sug­gested planting them in the garden to give them an easy start and get an ear­lier yield. One peach is 'Champion', an incredibly sweet white peach he recom­mended." (Swain and Briggs are both members of Slow Food Monadnock, a group that promotes eating locally grown foods in season. The group feels that food should not only taste good but be produced in a way supports local communities and doesn't harm the environment.) Near the trees is a col­orful garden sculpture called Talking Heads that is made from old shovels. The artist, Noel Greiner of Harrisville, makes metal and wood objects from found materials.

Though Briggs spends a large part of the year traveling for her work, she says she tries never to travel far from New Hampshire in the summer. "It is just too short a season and too beautiful to miss," she says.