Nestled into a hillside, a three-building homestead was designed for comfort and to bring the outside- which includes spectacular views of Tuckerman's Ravine on Mount Washington.

It speaks volumes about the splendor of a home when the people who helped to create it struggle to find words to describe it. That is certainly the case with a hillside, three-building gathering in the village of Jackson that offers panoramic views of Mount Washington and the Presidential Range.

"I know poetic is a grand word," says architect John R. Tankard III of John R. Tankard III Architect in Waban, Massachusetts, "so perhaps as I approach this home from the meadow and see how it sits on the hill­side without trying to dominate nature, I would describe it as serene."

Breathtaking is the only word to describe the views from the property, which are precisely what the homeowner wanted to savor when she first purchased the sloping twenty-acre parcel back in 2003.

"I grew up in the Mount Washington Valley, and I absolutely love the White Mountains," she says. "I wanted to be in a place where the mountains were an important presence in my daily liv­ing. I wanted to create a home where my family and extended family could come together and feel like they were getting away from the real world to a world where they could enjoy a beautiful environment and a beautiful view." 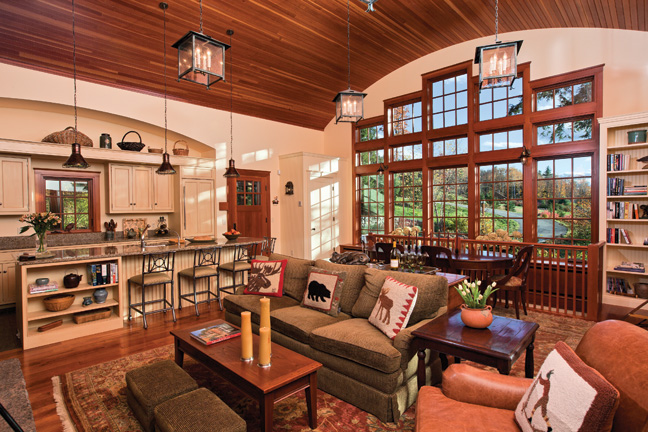 The simple exterior window array of the guesthouse comes alive on the inside, where the barrel-vaulted ceiling helps lead the eye to the expansive view.

That view can be savored from all three buildings in the gathering ("the word 'compound' just sounds too military," Tankard says), which includes a main house, a guesthouse as well as a pavilion that serves as the hub for the outdoor tennis court and natural stone swimming pool that features a diving rock and a fourteen-foot-diameter, stone hot tub.

The three buildings share a mountain Shingle-Style, sloped-roof look, but if there is uniformity of design now, there was a great deal of im­provising in the early going.

"Immediately after she bought the land, I was hired to do the land-use development and site planning," says landscape architect John Wacker, who previously served as master landscape planner for the University System of New Hampshire. "Conceptually, in laying out the various pieces, the main house wanted to be on the highest piece where it best captures the view, so I laid out the locations for the three structures and the grading-it's on a continuous 15-degree slope. But in the early going, the homeowner decided to change architects.

"When you see the property, you won't wonder why she was eager to get up there," Wacker continues, "so I said, 'I can design a guesthouse for you over the weekend.' So the following weekend, I sketched out this sweet little guesthouse"-on a cocktail napkin, according to the homeowner-"and then John Tankard tweaked it when he came on board." 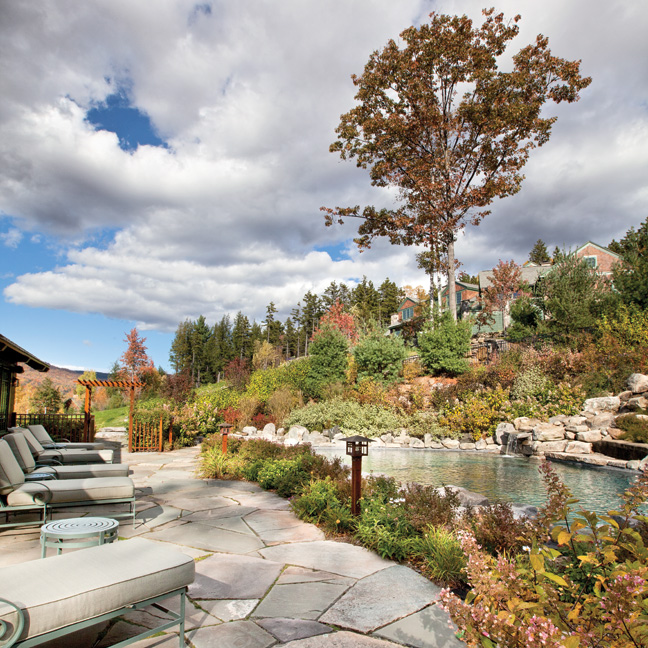 From the pool house deck, one can also enjoy a sweeping view of the main house farther up the slope.

Brothers Stephen and Michael Weeder from Tamarack Con­struction in Jackson were brought on as building contractors, and the team was made complete with the arrival of interior designer Elizabeth Swartz, ASID, of ERS Design LLC in Boston and Vermont, who was asked to help shape a harmonious vision for the look and feel within each of the three structures.

"I was actually brought on board the day the foundation was poured for the guesthouse," she says, "so that footprint was done and the location of all three buildings had been determined. But while we were working on the guesthouse, we were planning the pool house, and while we were working on the pool house, we were planning the main house. So it was all very sequential."

Her bonding with the architect was equally linear.

"John Tankard and I had a very nice collaborative relationship," Swartz says. "We got together on everything from space planning and where windows would go, to the adjacencies of different rooms, even materials selection and layout. So I got to be involved in much more than the interiors."

Even with her input in many areas, Swartz's touch is clearly evident in the interiors.

"Bring the outdoors in," the homeowner says of her vision. "That was one of the things I wanted to do right from the start, and Beth found ways to do that."

Swartz did so by using the guesthouse as something of a test lab. This allowed the homeowner to try various materials, vendors and tradesmen before beginning the new house.

"Our client wanted the interiors to feel natural, woodsy and green," Swartz says. "Nature was our inspiration, and we infused it throughout the house, even in the smallest of details. We intro­duced fabrics with various leaf motifs, natural materials for wall coverings and window shades, and continued this natural theme with custom-made rugs as well. The custom designed light fixture above the pool table is accented with dried red-maple leaves, and the wall sconces in the hallways glow with fern leaves applied to the mica. Everywhere you turn, there is a reminder of nature in its most beautiful form." 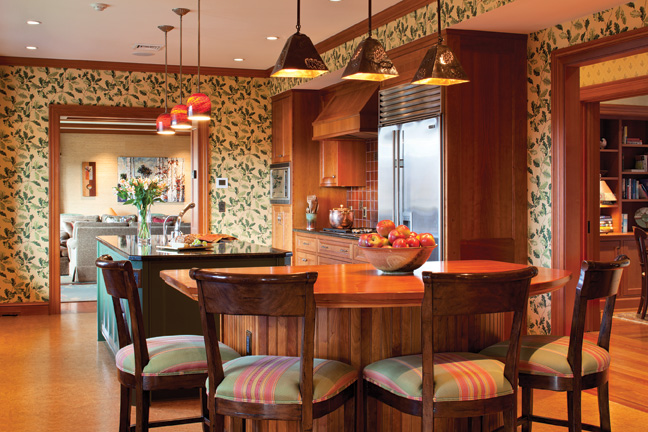 The kitchen area of the main house includes a dining area that features glass globe lighting from Earth and Fire and hammered copper fixtures from High Beams that echo the wallpaper’s leafy motif.

"Lighting was a key element in the success of the interior de­sign as well, and we allowed for as much light as we could bring in, using window treatments for light control and privacy only where needed," Swartz says.

The color palette of soft browns and varying blue-green shades echoes to the natural theme, as do the cherry wood floors and fir trim.

Just as Swartz took what nature gave her, the landscape ar­chitect followed suit. "Capitalize on the site," Wacker says. "That's always been a guiding principle for me. Let the site tell you what to do and try not to impose. I knew that John Tankard shared my feel­ings, because I'd done a ski house with him up the road a piece"-that's pure New Hampshire-speak-"and I tried to impress upon the owner that I didn't want to work on her property and have it feel as if the structures had been dropped in by a helicopter.

"It takes a lot of hard work to make a project like this feel natural," he says. "Too much architecture and too much landscaping can be imposing on the land, so we worked hard to give it that natural repose you get up here in and around Jackson."

An emphasis on comfort

Repose is a word used by both Wacker and Tankard to de­scribe the three buildings that nestle into the hillside. "We deliberately positioned the structures to be set into the slop­ing ground in such a way that they fit into the ground rather than appear as if they are trying to rise out of the ground," Tan­kard says. "We also sited them so what would look like a one-story house from the entry side would by default have a two-story elevation on the downhill side, consciously trying to bring the height of the building down by making the lower floors fit under the roof form.

"One thing I try to instill in my projects is the idea that comfort is still an important element in residential design," he continues. "So many newer homes don't feel like they'll be very comfortable. They might be dramatic, but the level of repose, which I consider to be important, might be missing." 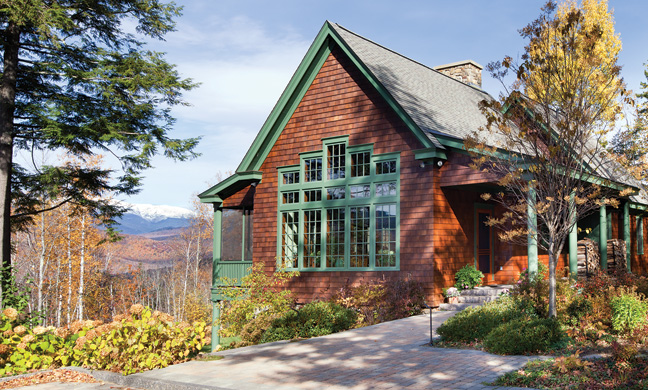 The simple exterior window array of the guesthouse comes alive on the inside, where the barrel-vaulted ceiling helps lead the eye to the expansive view.

In addition to that sense of repose, the other things you get in and around Jackson are those world-class views, views that the homeowner desired above all else.

Taking in the view

"When I bought the land, it was completely forested with no view," she says. "I did have a chance to see the view from a neighboring property, but I still didn't realize what I might have here."

The view she enjoys today exists in part because ten of the twenty acres she purchased are classified as a conservation easement.

"That means you can't build on it, but you can use it," Wacker says. "So we removed trees from a few acres and opened the space to create a meadow that gives her a better view of the mountains. She now has a 180-degree swing to get views of Mount Washing­ton, Black Mountain and a lot of the valleys."

"It's better than I thought it would be," the homeowner says. "One of my favorite things to do at night is to sit on the couch in the corner of the sunroom with all the lights out and watch as storms roll across the valley. I can see them coming all the way across from Mount Washington."

She enjoys the grandeur of that view from a home that, accord­ing to Swartz, deliberately avoids going too far.

"Sometimes I think a home can be too grand," Swartz says, "but this home isn't. It's casually elegant and comfortable. You can put your feet up and relax. The entire property is warm and beautiful, but the grandeur is in the view. That is just what this homeowner envisioned."