Some homes and families are destined to be together.

Long before they purchased the 4,300-square-foot historical Machinist House on Union Street in Manchester, Kathy and Bill Gillett were drawn to the place. "I always loved the house, before it ever was for sale," Kathy says. "We used to drive by it all the time when we lived in Amherst." Soon after those initial drive-bys, the Gilletts and their children moved to London, England, for Bill's job. When they returned to the United States four years later, the home was for sale. The Gilletts bought it in the fall of 2006.

Bill says it was the home's exterior-with whitewashed brick and a slate roof-that he found appealing. "The home had this classic, settled, older style to it," he says. "It was, of course, an architectural style you don't see in this area. It definitely had a more classical look than most houses around."

A home with history

The Union Street home was built in 1939 by Abraham Machinist, one of the city's foremost business and community leaders. Machinist owned and operated the Machinist's Department Store on Hanover Street in Manchester for seventy-three years before it was sold in 1980.

His son-Milton Machinist, who passed away in 1995-was equally as prominent in the local community. After serving during World War II in England, Milton retired with the rank of lieutenant colonel in the air force. Milton earned degrees from Harvard College and Harvard Business School, and later served as a trustee on several boards, including the Amoskeag Savings Bank, the Palace Theatre, Sacred Heart Hospital and Hawthorne College, according to articles provided by the Manchester Historic Association. 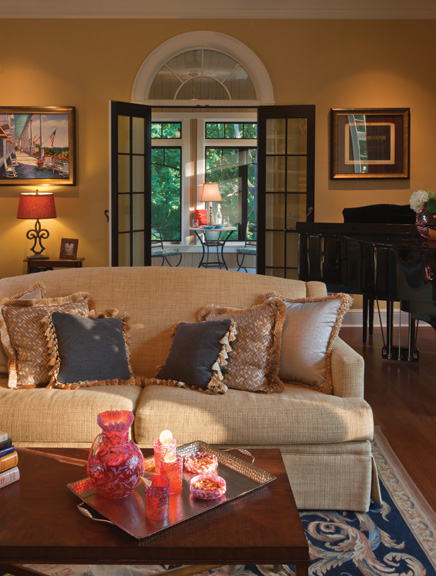 Kathy Gillett loves to read and write in the sunroom off the living room.

As the story goes, Bill adds, when the elder Machinist traveled to France on his honeymoon in 1936, he saw a home design that he later asked an architect to replicate. The Gilletts were told that Abraham brought over a craftsman from Italy to carve the wooden fireplace mantle in the living room. A crest with the craftsman's

initials is engraved in the mantle, and duplicated on the copper downspouts outside the home. Milton and his family lived in the home until the early 1990s.

Today, Bill and Kathy continue the tradition of civic engagement in Manchester. They both sit on a number of nonprofit boards; like Milton, Kathy serves on the board of the Palace Theatre. Since completing the home's renovations, the couple has hosted numerous events on behalf of The Way Home, a nonprofit organization dedicated to helping low-income households obtain affordable housing; the New Hampshire Writers' Project; New Hampshire Public Radio; and the International Institute of New England. The renovations greatly enhanced the functionality of the space and created a setting ideal for hosting events to support community organizations, Bill adds.

For the renovations inside and out, the Gilletts assembled a team of top-notch professionals, some of whom the couple had worked with on their former home in Amherst. The team included architect Rob Carty of TMS Architects in Portsmouth, builder Mark Gosselin of Gosselin Construction in Manchester, landscape designer Mark Rynearson of The Rynearson Company, Inc. in Goffstown and kitchen designer Susan Booth of Vintage Kitchens in Concord. 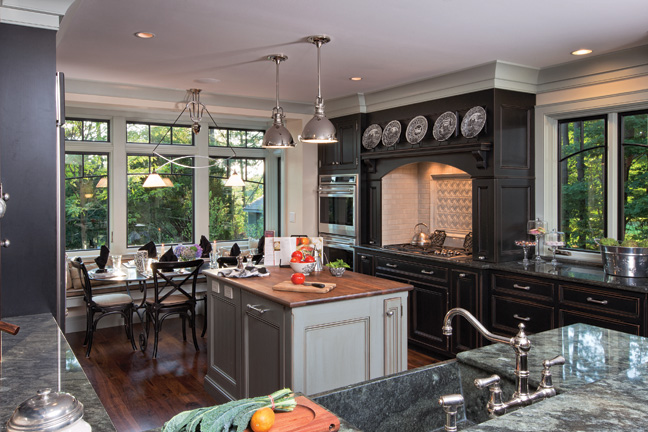 The kitchen, designed by Susan Booth of Vintage Kitchens, was on the Palace Theatre’s Kitchen Tour in 2009. Its cabinets and island have a furniture feel, and the colors and style were chosen to complement the rest of the house, says Booth.

Inside, the flow and layout of the home were changed to accommodate a modern family that entertains and cooks-a lot.

"This house is beautiful, but it was built when there were servants quarters above the kitchen," Kathy says. "There was a rickety staircase down from those rooms that led to the basement." Lisa Zizza, the interior designer the Gilletts worked with who's now retired, suggested opening up the staircase as well as flipping the location of the dining room and the kitchen so that the kitchen would be located at the center of the first floor. "The kitchen is the heart of the home, so you want it to be in the center," Kathy says. "We're in the kitchen all the time."

Carty was brought in to provide architectural design for structural renovations that included the kitchen, the dining area as well as the upstairs addition of a master bath and dormer. What didn't change was the stunning, original curved staircase that winds upstairs from the foyer.

Bill adds that the home had "great bones," but most of the infrastructure- the plumbing, heating and electrical systems; old walls; and paneling-was replaced.

The old leaded windows were replaced with more energy-efficient models that still have character. Kathy found windows with three arched windowpanes at the top and decided to echo the arch theme in other design elements, such as light fixtures and the frame above the kitchen stove.

Reconfiguring the layout helped make the house more livable and open throughout. "I like the functionality of the house now. I think it works well as a place that's comfortable to live in. Moving the kitchen to the center of the house made sense for the way we live," Bill says. And Kathy adds, "There isn't a room that isn't used."

The patio, designed by The Rynearson Company, Inc. in Goffstown, features an outdoor kitchen and dining area; shorter granite-topped stone walls—perfect for extra seating; and low-maintenance flowers and shrubs. A stone fireplace with a fourteen-foot-high chimney is the focal point in the outdoor living space. Photo by John W. Hession

Living space in the home includes five bedrooms, four bathrooms, a kitchen with butler's pantry, a music room, a study, a mudroom, a dining room and a sunroom-where Kathy loves to write.

The flooring choices for the home include a dark-walnut stained hardwood with a herringbone pattern in the front foyer that mimics the design of the front walkway outside.

Family members also spend a great deal of time in the walnut-paneled study, where they gather to read, work or watch one of their favorite television programs, Modern Family.

The heart of the home

Details matter when redesigning a kitchen in a historic home. Booth says it was important that the newly relocated kitchen flow with the remainder of the home. "This is a very elegant home,

but they wanted a workable space. The details, the finishes, all mattered not only with how they worked within the room, but how they related to the adjacent family room and spaces," Booth says. "You take the whole environment into account, then you make informed decisions."

She and Kathy chose pieces-such as the cabinetry, hutch and island-that looked like furniture and were finished in colors that went with the rest of the house. The cabinets were finished in black, which complements the kitchen windows and dining set. The mahogany-topped island has a distressed slate- blue finish that adds visual interest to the space. Kathy made sure that two dishwashers and two ovens were installed, as well as a five-burner gas stove. That way, there are never dirty dishes in the sink and plenty of space for cooking for a family of six when everyone is home.

"The thing I loved about this project was the team effort. Kathy has amazing vision. She had a long-standing relationship with the interior designer and a skilled builder who welcomed me in," Booth says. "I was so excited to be part of this team. Kathy knows what she likes, and she and the family live in every inch of the house."

Significant changes to the home's outside spaces included a beautiful new faux cobblestone circular driveway, a new walkway and an outdoor patio/kitchen area with a fourteen-foot-high chimney. With a historical home such as this, Rynearson says the object is to maintain a classic, older feel to the driveway using materials that were more affordable than solid cobblestones. For visual interest, the driveway's inlaid brick design ties with the front walkway. Rynearson says the Gilletts' decision for a circular driveway made a big difference in how he approached the home. "There was no way to get out without backing your car out," he says. The goal was to make the front of the house into more of a courtyard than a driveway. "Kathy really wanted to give the house a street presence," Rynearson says.

"We incorporated a lot of groundcover for visual continuity and to cut down on mulching," Rynearson says. "We try to design spaces to look good over the long haul."