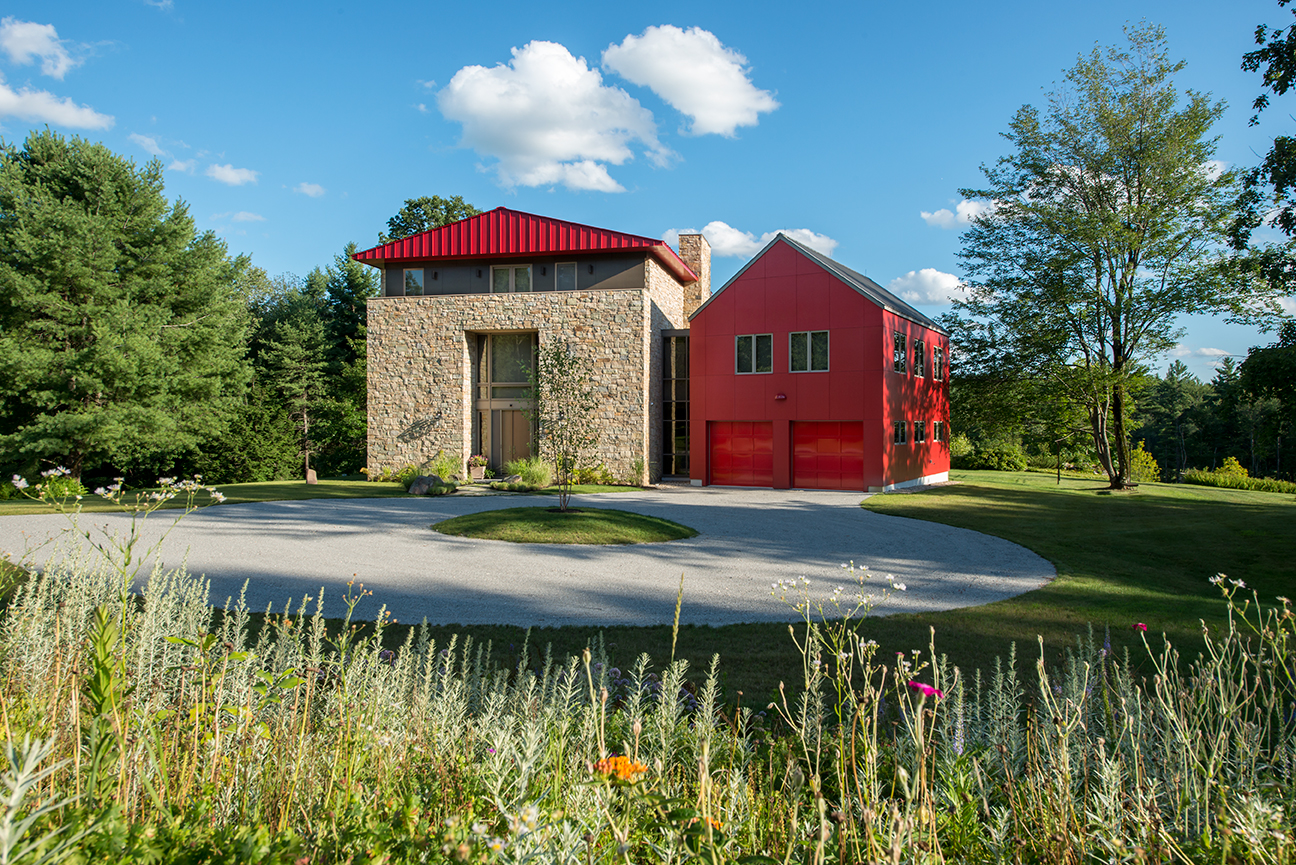 Mires’s design for this villa-like home embraced the homeowner’s wishes: strong geometry, a stone façade and a floating roof. The “barn” gives the home a New England feel and is attached to the house with a glass connector.

Great results are the products of great efforts,  and that describes the house that won New Hampshire Home’s award for Excellence in Architectural Design in 2014. It took two years for Dennis Mires, principal of Dennis Mires, PA The Architects in Manchester, to design the home and for North Branch Construction, Inc. in Concord to finish building it. But the result, as of the end of 2012, is a house that works and feels comfortable, for either the immediate family or the extended family gathering for visits and holiday celebrations.

Our story begins when the homeowner hired North Branch Construction and Mires. Initially, the project involved building an addition to an older house on the property. “After a lot of thought, we determined that the homeowner wasn’t saving any money by keeping the building,” Mires says. “So with new schematics and pricing, we decided to take it down and build a new, more energy-efficient home.” 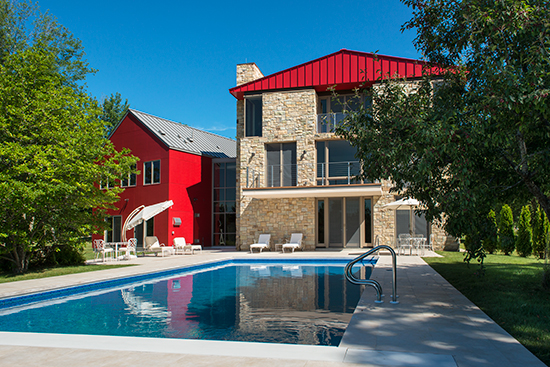 Architect Dennis Mires’s design also called for reorienting the pool to better complement
the site and shape of the house.

The homeowner, who has traveled extensively throughout the world, brought Mires architectural drawings as well as images of villas in Italy. “By the time I met with Dennis,” the homeowner says, “I was fairly clear on what I wanted: a sober, monastic structure with strong geometry, which would—at the same time—incorporate a playful element. I liked that he was intrigued and eager to embark on this journey.”

“The homeowner also wanted a stone façade, so we found a stone quarried in New York,” Mires says. “The client likes high design and a reason for things to be a certain way.” So Mires says he came up with floor plan that “reflects comfortable proportions to help achieve the homeowner’s goal of being at home with just the immediate family or with the extended family.”

In order to minimize the footprint and maximize the views, Mires conceived the main house as a stone villa—a cube of nine boxes (three on each side) on each of three levels. The first floor provides an entry hall, studio and staff suite. The second floor is a kitchen, living room and dining room. The third floor has a master suite and guest suite.

Another design element the homeowner wanted was the floating roof, which wraps a deep soffit. “This gives the roof volume and not just surface,” Mires explains. “The recycled metal we used for the roof also adds a contemporary element to the design.”

To give the project a New England feel, Mires designed a “barn” with a garage and studio space on the first floor and two guest suites above. He attached the barn to the house with a glass connector, which provides a vestibule on the first floor and a shared study area on the second. An elevator helps ensure that multiple generations have access to the whole house.

Mires angled the barn to the house, both for the view and the light as well as to differentiate the buildings and their scales. “Not having the buildings parallel recognizes their differences,” he says. 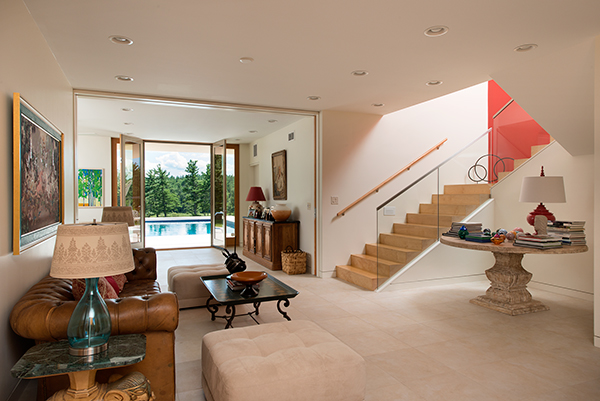 Large format porcelain tiles were used for the floor of the foyer and around the pool, and provide continuity going from inside to out.
Click the arrows below to read more

Using real stone and not a veneer for the building steered the project in certain directions. In order to accommodate the weight of the heavy stone façade and provide adequate support for the roof so it appeared to float, Mires’s design required a steel-reinforced wood frame.

North Branch Construction’s project manager Joe Campbell hired LaBrie R E Masonry LLC  of Bow to do the stonework, as the homeowner wanted to emphasize the stones’ texture and minimize the joints. “The masonry took nearly three months to complete,” Campbell says, “because of the stones’ irregular shape and how thick they were—between three and five inches each. We had to do a lot of handwork before the stones could be placed.” 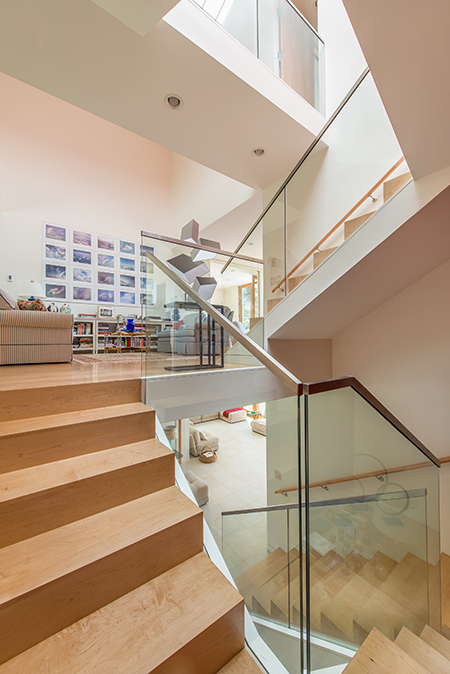 The stairs to the top floor lead to a three-foot-wide bridge between the two bedroom suites. A skylight brings light down into the house.

The design also called for reorienting the pool to better complement the site and shape of the house. But the homeowner requested that no trees be sacrificed for the sitework. “This was delicate work,” Campbell says, “because we were very close to the roots of two trees during the excavation for the pool. Pacquette [Pools in Hooksett] did a wonderful installation.”

Inside, the homeowner wanted the building to look transparent and be filled with light, so Mires designed the stairway with glass railings; the maple steps look like they’re floating. The roof over the stairway is a large skylight, which brings light down throughout the house. The stair wall is the same red color as the barn, and there isn’t any trim around windows or doors. “This gives a cleaner, less traditional look,” Mires says.

In order to make the home as energy efficient as possible, Mires specified a high-performance building envelope, with air and vapor barriers as well as insulation inside and outside the frame. The building is heated with a high-efficiency, propane-fired radiant-floor system; it also has an energy-recovery ventilation system. “The home has no air conditioning, and in summer, the homeowner opens the windows and uses fans,” Mires says.

The many windows were a concern for Mires, who knew that the homeowner wanted to be able to enjoy views year-round, but not have to worry about heat loss in the winter and heat gain in summer. So on the main house’s aluminum-clad and fir Loewen windows, with low-E tinted insulated glass, Mires used phantom screens that roll up and out of sight in winter. The glass doors in the breakfast area also have phantom screens, which let fresh air circulate in summer and keep the bugs out.

Much of the lighting is LED-recessed cans that can be dimmed. “There are also lots of multiple switchings so the homeowner can control the lighting throughout the house,” Mires says. In addition, each room is zoned so its heat can be controlled separately.

Last year’s New Hampshire Home award for the house’s architectural design was well-deserved recognition. “Although this is not a typical New England house,” says the homeowner, “it blends perfectly with the landscape. The home’s solid stone and playful floating red roof are contemporary in design but welcomingly warm, airy, light and, above all, happy.” 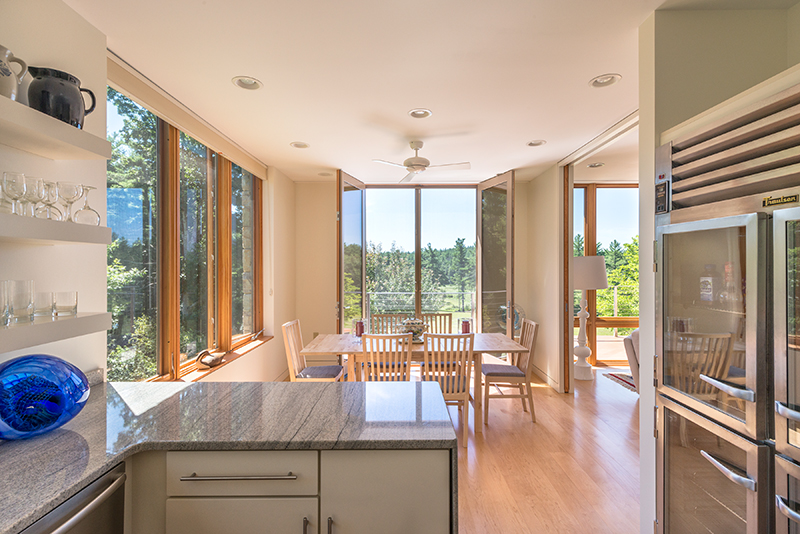 The breakfast area off the kitchen has phantom screens that roll up in winter; in summer, they keep bugs out and allow air to circulate. Cable railings don’t obstruct views. 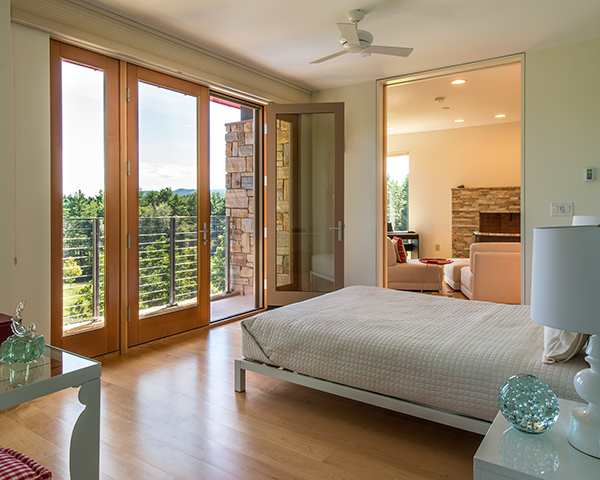 The homeowner enjoys views of the pool, mountains and a pond from the living room as well as from the master bedroom. 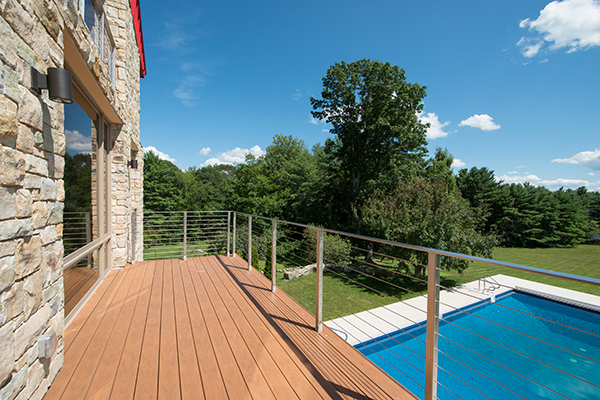 Cable railings on the deck provide unobstructed views of the pool and landscape beyond.