Robert Jensen inspires those who attend his July workshop at The Fells to make unique and beautiful floral arrangements. 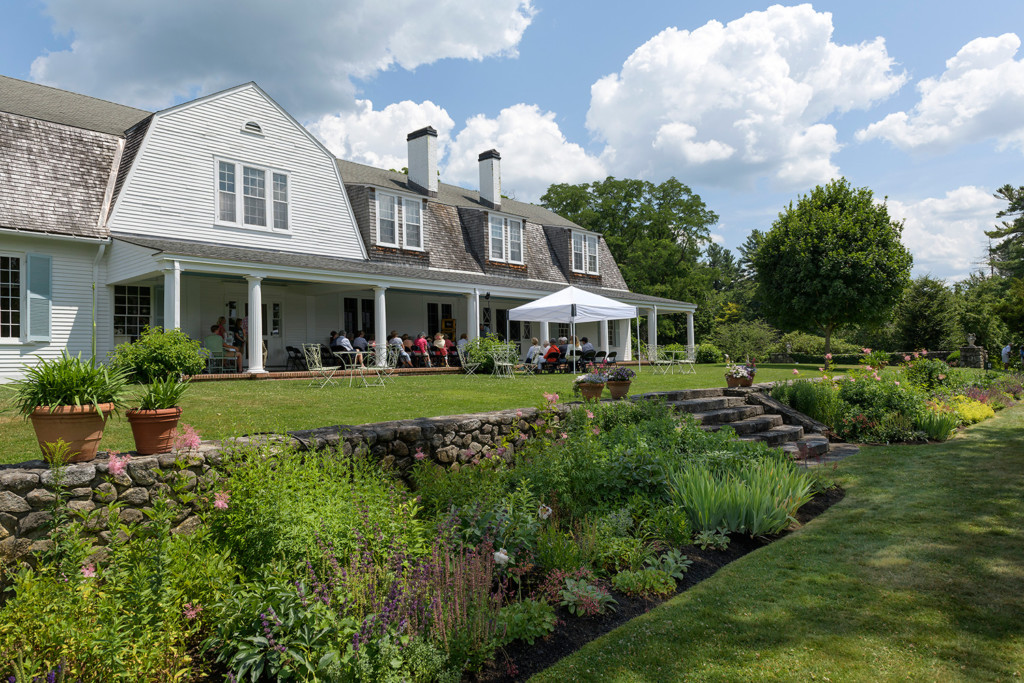 On a sunny summer afternoon, the front porch overlooking the garden at The Fells in Newbury is the perfect place for a flower arranging demonstration by local floral designer Robert Jensen.

Visual art has the power to inspire us in many ways. Art in Bloom is the popular practice of designing a floral interpretation of a work of art and displaying it together with the corresponding painting. A collaboration between galleries, and amateur and professional floral designers and garden club members, Art in Bloom was originally the idea of Boston Museum of Fine Arts volunteer Lorraine Pitts back in 1976. Since then, the idea has grown into an annual event at many major galleries across the country.

Each summer, The Fells Historic Estate and Gardens in Newbury has its own Art in Bloom exhibit. It showcases arrangements created by local designers and gardeners that were inspired by the current artwork on display in The Fells gallery. “I started Art in Bloom at The Fells about a dozen years ago,” says Nell Leach, longtime Fells volunteer and chair of Art in Bloom. “Many different people have participated over the years: Fells volunteers, professional florists, garden club members and friends who are great arrangers. We have had a wide range of art shows over time, which provide the source of inspiration for the designers.”

To encourage participation, local floral designer Robert Jensen has been giving workshops for the past several years demonstrating how to interpret a painting into a floral creation. “He is a great friend of The Fells, and we are very grateful for his participation. He has such a flair for this,” Leach says, “His theater background really comes through.” 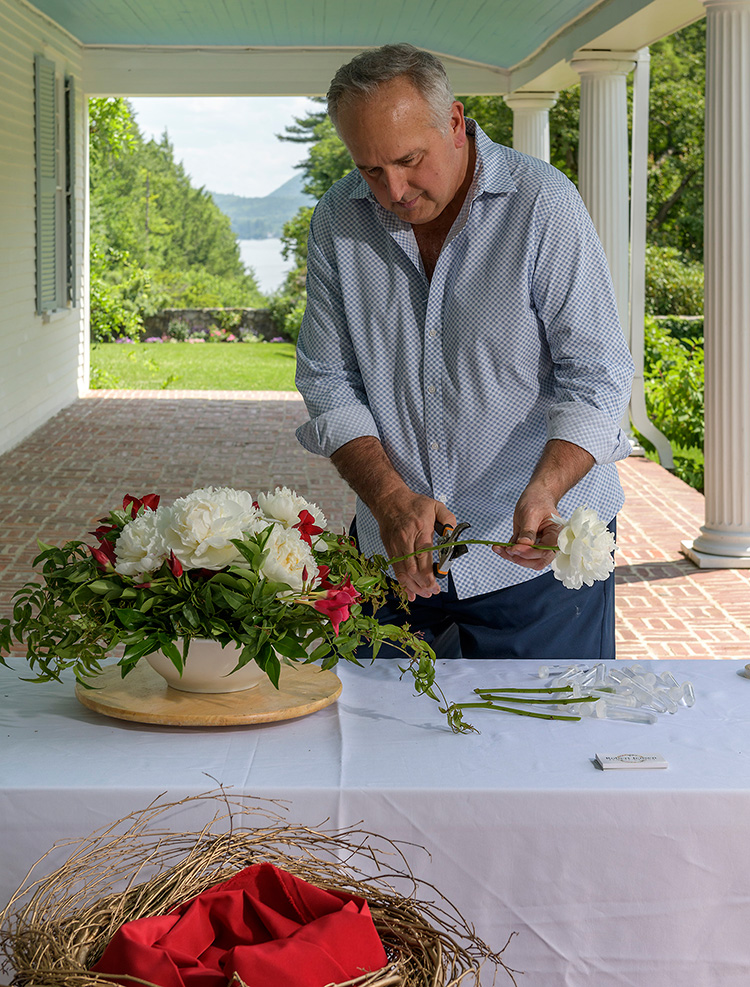 Jensen recuts the peony stems to enable them to take up water, keeping the blossoms fresh.

When Jensen left his career as an actor on Broadway after thirty years, he worked for two years at the Carolyn Hill Fine Art Gallery in SoHo as the in-house floral designer. “I had great fun shopping at the New York City flower markets,” Jensen says. “I was not professionally taught, but I have been dabbling in flowers since I was twelve.” Eventually he brought his love of flowers and decorating to New London, opening Robert Jensen Floral Design. “In mid-July there is so much in bloom, it gives potential flower arrangers plenty to work with and gives creative people an opportunity to express themselves,” he says.

Last summer, the paintings in The Fells gallery were from the Frances Weston Hoyt Collection—Bringing Light to Life—and a related exhibit of painters who worked with Hoyt called Distant View. Local floral designers and garden club members interpreted the painting of their choice in flowers, and the
arrangements were on display over a long weekend in July.

The Fells Executive Director Susan Warren participated, selecting the painting Mother and Child by John Traynor to interpret in flowers. “This painting represented to me, at the time, my daughter-in-law who was expecting my first grandchild, a little girl. I was touched by John’s painting and envisioned that the woman in the painting holding the little girl would be both of them in future years. The sculptured woman’s face I used for my vase seemed perfect for the flowers selected, and its whimsical design represented my happiness and my thoughts of embracing both of them,” Warren says. “I feel that when the designers come to The Fells gallery to select their painting from the exhibit for Art in Bloom, like me, they somehow, in some way, relate to what they see and can almost instantly begin to feel an attachment to it. I would venture to say that at that moment of selection, the creation may come to mind immediately—down to the container and flowers to be used. It seems cliché, but it could be said that the painting ‘speaks to them,’” Warren says. 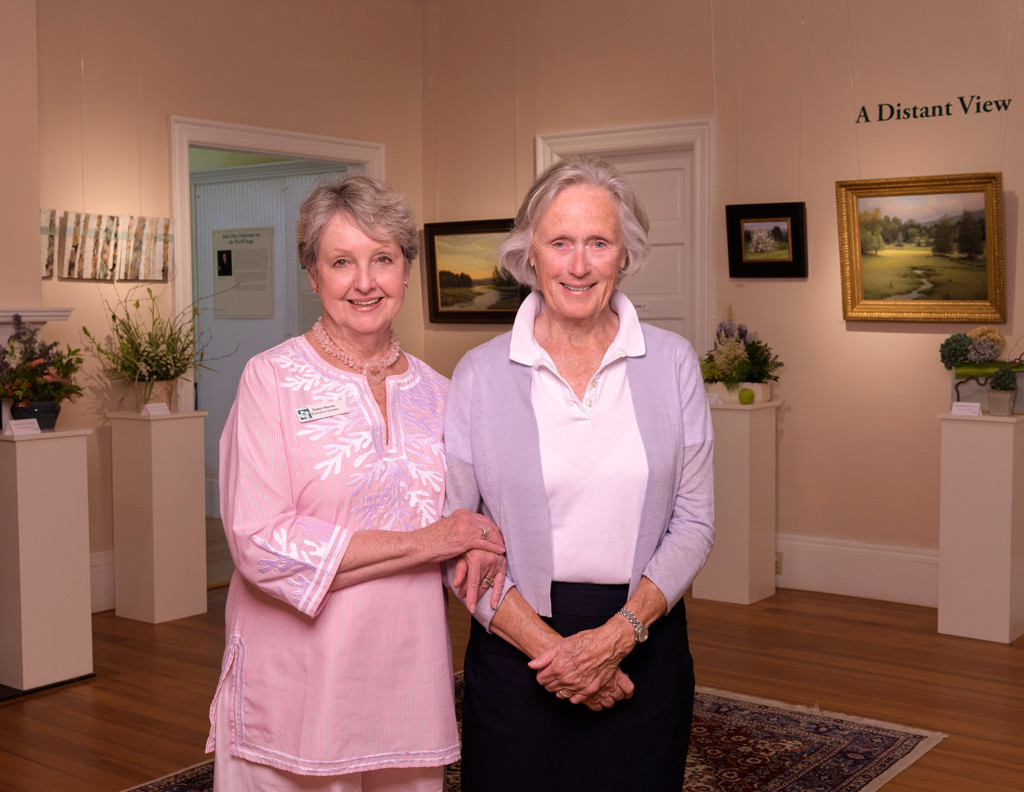 Executive Director Susan Warren (left) and Nell Leach, chair for the Art in Bloom program, look forward to Jensen’s demonstration every summer
because it encourages visitors to think deeply about the works of art and inspires them to be creative with their interpretations.

At last July’s workshop, Jensen played to a packed house. He chose a pair of paintings of doves by Mary Jane Q. Cross. “I was attracted to the peacefulness, theatricality and color,” Jensen says. “Sometimes simple and easy is fun to do. If you are familiar with what I do at the shop, you know it is usually over the top. People shout ‘Stop!’” he says, with a laugh.

Explaining the paintings presented at the workshop, Jensen told us that the first dove painting was called The Gift, My Peace, I Leave You. “Today in our worlds, we all would welcome a little peace,” he says. The second dove painting was called Present Comfort. He went on to explain the symbolism of love, grace, motherhood, sacrifice, devotion and nurturing represented by the doves along with Cross’s idea of the birds as messengers from a higher place.

As promised, Jensen kept the arrangement simple. Using a white bowl to hold a piece of floral foam for the base, he demonstrated how to make a grid of tape across the bowl. “This keeps everything sitting up,” he says. “Make sure the vessel you use is dry, or the tape won’t stick.”

Flowers may be the stars of an arrangement, but greenery is the all-important supporting cast. “I love using greens,” he says. “Sometimes I will use up to five different kinds of greens. They give such wonderful texture.” For this arrangement, Jensen chose glossy ligustrum leaves as a foundation. “They cover up all the tape,” he said. He put red mandevilla flowers and white peonies in individual flower tubes that hold water so each blossom would have its own water supply. The jasmine flower vine stems were so delicate that he placed three together into several water-filled flower tubes before adding them to the bowl, wrapping the tendrils of the vines around the greenery to form a bird’s nest on top of a bird’s nest. He laid the mandevilla in the jasmine, letting it find its own place, and finally added the white peonies that represented the doves. 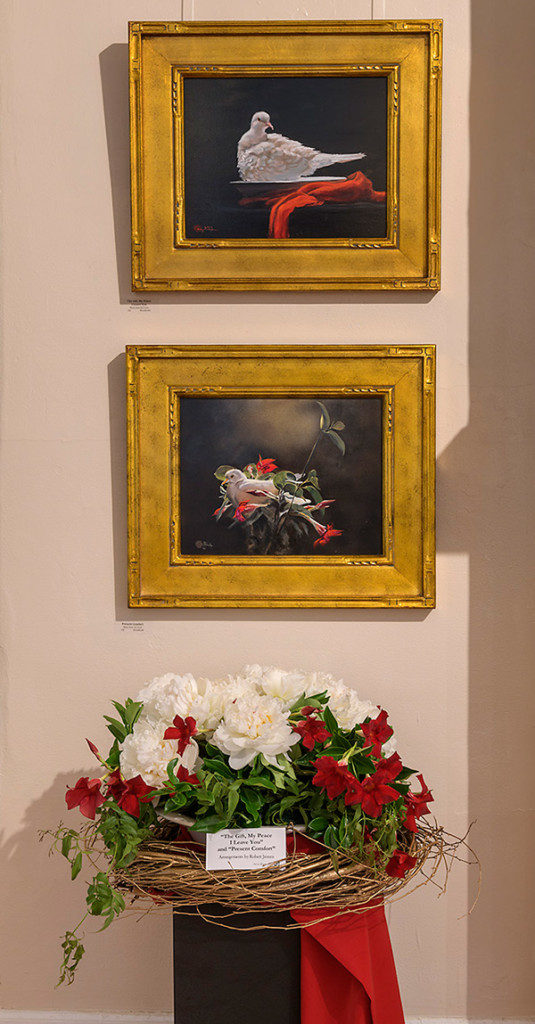 The finished arrangement is displayed at The Fells gallery under the dove paintings it represents. The top painting is The Gift, My Peace, I Leave You and the bottom one is Present Comfort.

Of the finished product, he says, “Even in simplicity, there is beauty and peace.”

Newly retired in 2017, Judy Odell of New London has attended two of Jensen’s demonstrations. “At the first one, I was inspired to be creative,” she says. “To just take some flowers and greens, and put them together with a few more things from my garden, using ideas
from my own arranging.”

The demonstration using the dove pictures gave her some new thoughts on coordinating flowers with paintings. “I’m astonished by the beauty created by both the artistry of the painting and the floral arrangement,” Odell says. “Both outstanding and uplifting! This workshop inspired me to ‘spread my wings.’”

“Robert Jensen inspires everyone who has the opportunity to watch him as he creates his magic in front of your eyes. Robert thinks outside the box and has the ability to create the unusual, yet beautiful, with the wow factor. Color, design, form and function come together in lovely unity to make those in his audience sigh in unison, ‘Wow!’”
Warren says.