Lisa Curry Mair’s paintings are influenced by folk-art traditions, but have her own special touch. 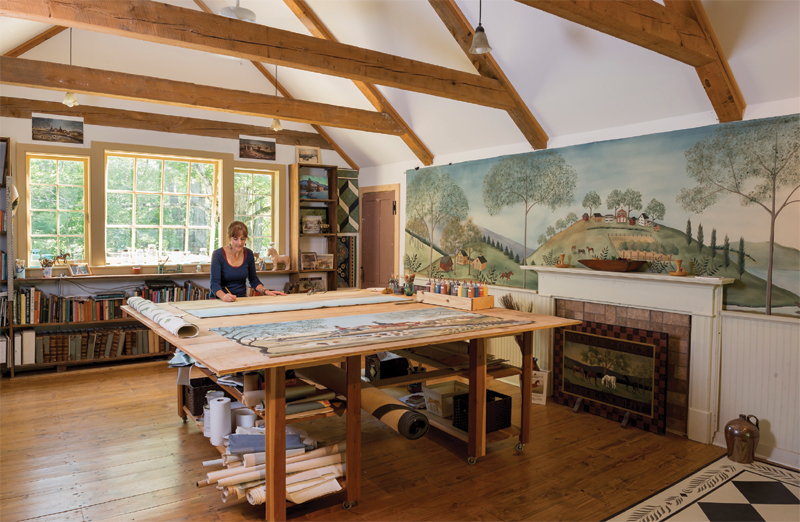 Painter Lisa Curry Mair’s two-floor studio is in a carriage house next to her remodeled 1790 farmhouse in Perkinsville, Vermont.

“Everything about his work speaks to me,” she says. “I love his composition, his sense of whimsy, how he throws in things you’re not supposed to notice. I connect with him on a lot of different levels.”

Curry Mair’s mural work echoes that of Porter—the same stylized landscapes; the same classical simplicity; the same grays and browns combining with warm, earthy tones. But there are differences, too. She departs a bit from Porter’s folk-art style. “I definitely have a folk-art leaning, but my work tends more toward realism. I strive to create mood with shading and colors, and a sense of the moment through composition and subject matter,” she says.

Another difference: Curry Mair is not an itinerant painter as Porter was. She is happily ensconced in her Canvasworks Designs studio in Perkinsville, Vermont. It occupies two floors—one for design, one for the execution—in a carriage house next to her home, a 1790 Cape remodeled into a three-story farmhouse in 1830. A bank of windows in her studio looks out on Mount Ascutney, a pond and a horse pasture where her horse Kate grazes with the others. “It’s quite lovely,” she says. “I never want to leave here.”

Good thing, because her days are filled with her own paintings as well as work for others, mostly owners of historic homes and museums. Many of her commissions have been for another of her artistic expressions: floorcloths, a decorative canvas floor covering used in many homes before the days of linoleum.

In fact, it was the linoleum in her old house that led to her now-twenty-five-year career of painting floorcloths. When she and her husband took up the linoleum in their kitchen, it revealed a beautiful reclaimed board floor—and a stain they couldn’t get rid of. To cover the stain, Curry Mair used some canvas left over from building a kayak to paint a floorcloth. She called on her then-modest art background and her college math major to create the traditional geometric patterns of long-ago floorcloths. Word got out about her kitchen floorcloth, and soon she was setting up her studio for what would be an avalanche of clients.

Six years ago, Cristin and David Roby called. The Lyme residents shared Curry Mair’s love of historic art, old houses and horses. The couple wanted Curry Mair to use her skills to add period-correct artistic elements—a mural and floorcloth—to their recently completed home, a meticulous replica of a typical 1790s Connecticut River Valley design. The Robys had chosen that design because they felt it was important that the house look like it belonged in the landscape—they worked with Classic Colonial Homes in Leverett, Massachusetts, to draw plans for the home; Clow Construction in Etna to build it; and had Architectural Components, Inc. in Montague, Massachusetts, make the exterior doors and windows. “The town of Lyme is a well-preserved New England village where historic memory is highly valued,” David says. 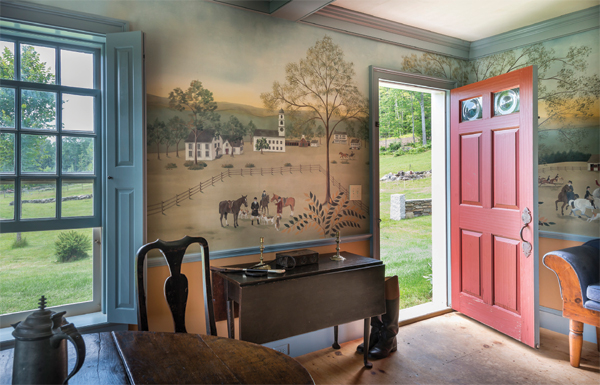 Another mural portrays a foxhunt on their farm.

That village is depicted in the mural Curry Mair painted for three walls in the Robys’ south parlor. “The front wall has two windows,” David says, “so we kept that a simple design with just a single tree in between. The south wall is a view of the village circa 1900, and the back wall depicts a foxhunt through our farm.”

The Robys—members of the North Country Hounds, which has foxhunting territory on both sides of the Connecticut River—are portrayed in the mural astride their horses and surrounded by their hounds. “I’m depicted fancifully riding side-saddle on my Pye,” Cristin says. “David is jumping Rumble over the fence, bringing up the rear of the field.” The other riders pictured are foxhunting friends.

Curry Mair worked from photos provided by the Robys as well as historic photos and postcards found in her research. After a pen-and-ink sketch was approved, the mural was painted in studio on textured canvas and then hung as wallpaper would be by Gilley Restorations of South Woodstock, Vermont.

“The trees and the natural landscape bring the outside in, which creates a wonderful calming atmosphere,” David says. 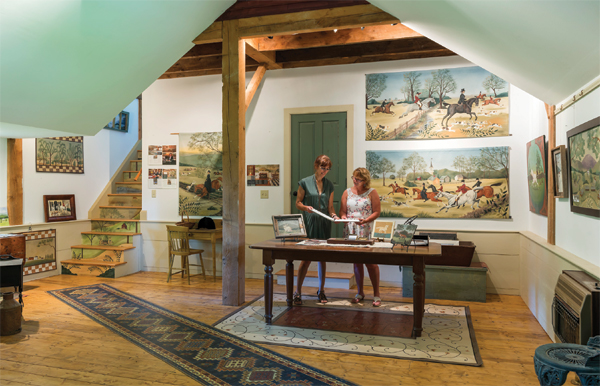 The murals of Lisa Curry Mair, shown here on the left with friend and client Evelyn Leach, are painted in her studio on textured canvas and then hung as wallpaper  would be. Curry Mairs artistic approach—stylized landscapes, classical simplicity, and a mix of cool and warm tones—is reminiscent of the famous nineteenth-century itinerant muralist Rufus Porter.

For the north parlor, which the Robys use as a formal dining room, Curry Mair painted a floorcloth that complements the historic Adelphi wallpaper. “It was important that the floorcloth’s design and colors not clash with the walls,” Cristin says. “The paper has an intense red ground and is very dimensional, as is the marbleized diamond pattern of the floorcloth.”

Another Curry Mair work gracing the Roby home is a portrait of David done as a birthday surprise. It re-creates the scene in Thomas Spencer’s Scipio, circa 1750. “I thought it would be fun to imitate the composition with David in 1790s dress, suggesting the period our house seeks to reproduce,” Cristin says. Also in the painting, a Rhodesian Ridgeback that was once a beloved family pet.

It is framed paintings like this that Curry Mair plans to focus on as she moves forward. She says she’ll still do murals (“they’re also paintings, large paintings”) and occasionally a floorcloth, but mostly it will be smaller works of her choosing, marketed to a general audience and galleries. “Years from now, I want to be like a little old lady, sitting here painting whatever I want,” she says.

No doubt much of what she paints will be historic art, doing what she calls her “Outlander thing,” traveling back in time through her art. “It means a lot to me to go back to a more peaceful time,” Curry Mair says. “That’s where my paintings go. That’s what I’m trying to do.” 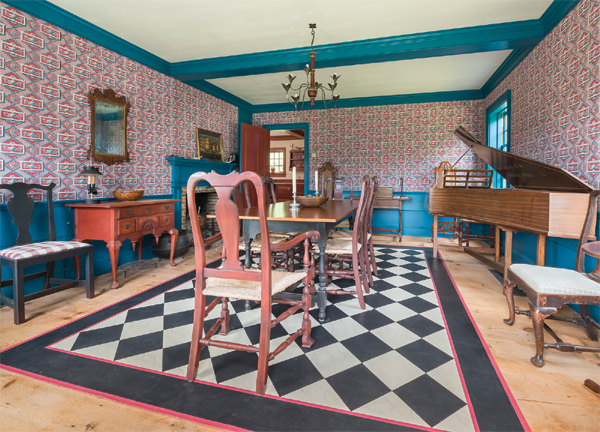 Before she turned her focus to murals and other paintings, most of Curry Mair's commissions were for floorcloths, such as this one in the Robys' formal dining room. Its geometric diamond design and red ground complement the historic Adelphi wallpaper. 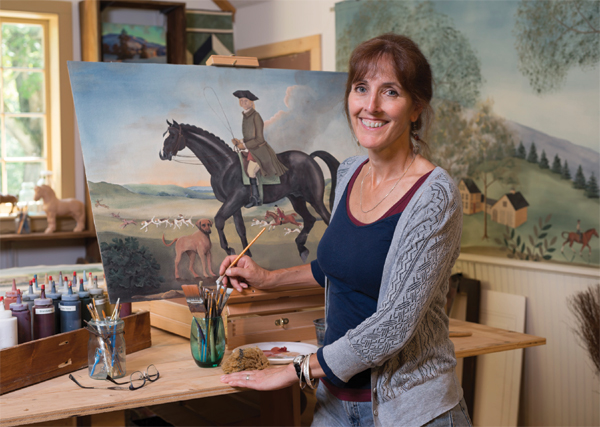 Lisa Curry Mair painted a portrait of David Roby astride his horse in 1790s dress as a surprise birthday gift from his wife, Cristin. 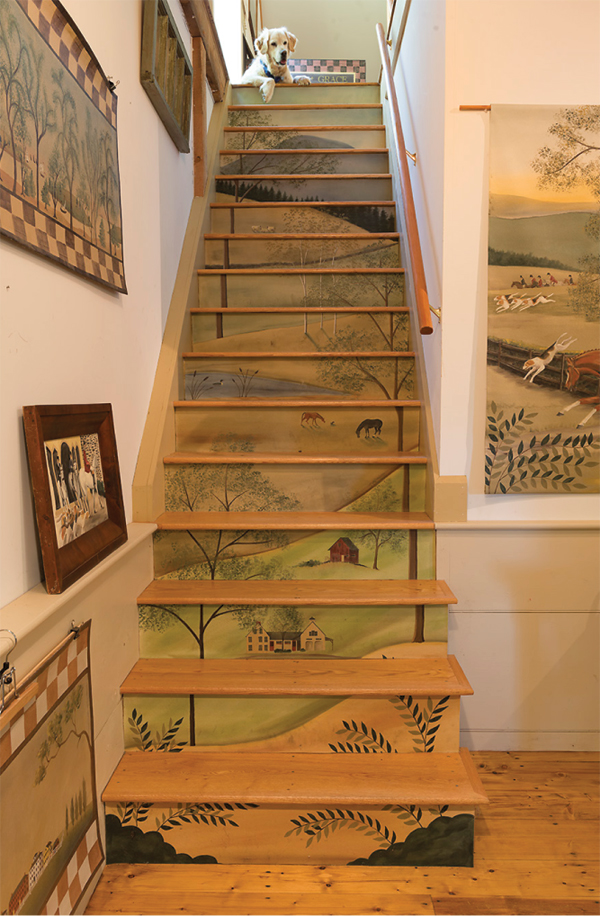 What Curry Mair calls a “vertical mural” is painted continuously on canvas and then cut to fit  the stairway risers.
Categories: Architecture and Interiors, Artwork and Design