At Home in a Carriage House

When most residential properties are developed, the house is built first, and the landscaping and any outbuildings follow. But Tony Hanslin and Holly Ostrander's property on five wooded acres in Grantham came about in reverse order. Five years ago, the couple began to create a Zen garden in a plot not far from their home in Eastman. After that, they added a wooden bridge across the stream, a teahouse and, finally, the post-and-beam carriage house in which they now live.

Hanslin and Ostrander decided to start with the garden, then move "backward" to the structures because they couldn't agree on what to build first. (This disagreement would later prove serendipitous.) Originally, the carriage house was going to serve as guest quarters. The final part of the project would be the big house that Ostrander had in mind. She and Hanslin would stay in the carriage house as long as it took to build the main residence. From the start, however, Hanslin suspected they might not need a big house. "He said, 'Let's build the carriage house first and see what you think,'" Ostrander says. Construction on the main residence went as far as laying pipe in the ground. But after moving into the 1,478-square-foot structure in 2008, Hanslin and Ostrander decided it was all that they needed. Says Ostrander, "We have no plans to build another house at this time."

With two bedrooms, a living area, dining area, kitchen and bathroom on the top floor, as well as extra bedrooms, laundry and storage areas below, Hanslin and Ostrander have plenty of space, particularly as they spend a lot of their time outdoors, working in or enjoying the garden. Hanslin practices tai chi in the teahouse that was built for that purpose next to the stream. And the couple enjoys the striking seasonal views of the surrounding garden and woods from the many-windowed abode. Life is enjoyably simplified in the smaller surroundings, with less "stuff," and, of course, Hanslin and Ostrander saved money by not building a second, larger house. 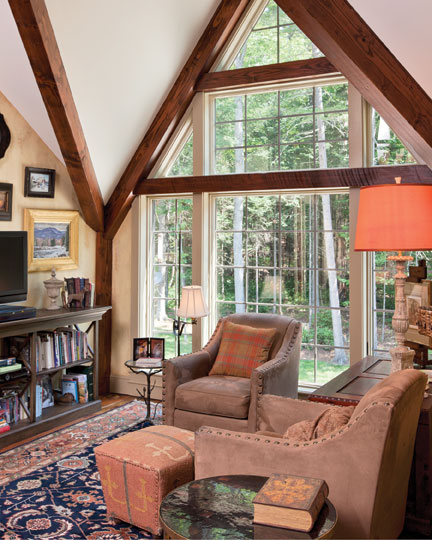 As the owner of Yankee Barn Homes-a forty-one-year-old postand-beam home building-and-construction company based in Grantham-Hanslin was able to handle the design and construction of his home in the woods. The inspiration for the structure, according to Ostrander, came from old Victorian carriage houses she had seen around New England. Up until that time, Yankee Barn had specialized in barns and barn homes, but Hanslin designed the carriage house differently. "It was the first we'd built with so many beams," he explained, noting its seven rooflines and steep gables. "This was a departure for us." All the beams are weightbearing

and provide structural support as well as decorative appeal. Floor-to-ceiling paned windows on the upper level of the house provide a feeling of being outdoors. "It's like living in a tree

The bottom floor of the house consists of spaces for utilities, including laundry and storage as well as two large rooms, or bays, with roll-up garage doors. These rooms could serve as garages but also work as bedrooms. Right now, Ostrander's grown daughter stays in one of the ground-floor rooms during her frequent visits- she is learning the ropes at Yankee Barn and has joined the business as general manager.

Ostrander, who has a design background, did the interior decoration in collaboration with Jude Golden, a former interior designer now working at Yankee Barn Homes. The fir beams create a strong graphical element, which Ostrander complemented with walls faux-painted by local painter Peter Walls to resemble a creamy yellow Venetian plaster. Many of the cabinets used in the carriage house were leftovers from model Yankee Barn homes. Other pieces came from nearby sources-the corbels holding up the kitchen counter, for example, are from Vermont Salvage. And many of the furnishings came from Hanslin and Ostrander's former home in Eastman. Since that house was bigger than the carriage house, they had put many items in storage while living- temporarily, they thought-in the carriage house. Once Hanslin and Ostrander decided to stay put, they had to purge the items in storage. "The downsizing was difficult," Hanslin admits, "but once it was done, it felt great."

Apparently, many people feel the same way about streamlining their lifestyle, because the design that appealed so strongly to Hanslin and Ostrander has been a big hit with Yankee Barn customers. "Empty-nesters are really liking it," Ostrander says. Other buyers include vacation homeowners, who are attracted by the carriage houses' small footprints and great views from the second floor. The ground-floor rooms with their garage bays provide excellent storage for snowmobiles, skis, threeor four-wheelers, and all manner of other "vacation toys." 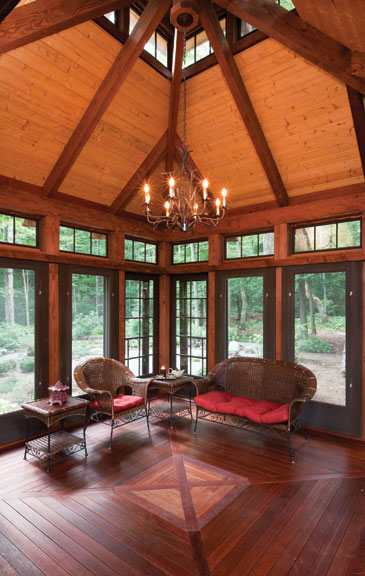 Furnishings inside the teahouse are intentionally minimal. It is a space for practicing tai chi and quiet relaxation.

Hanslin and Ostrander had been interested in creating a Zen garden for several years, prompted in part by Hanslin's interest in tai chi and his desire for a meditative environment in which to practice. A visit to the Japanese Tea Garden in San Francisco several years ago also inspired the couple to build a teahouse. Theirs is a simple 225-squarefoot, Douglas-fir structure with a pagoda-style roof and sliding glass doors and screens that make it usable three seasons out of the year. The teahouse sits near the edge of the stream; because it is not a residential structure, building regulations allow it be situated closer to water than can a house.

Hanslin owned the Grantham property for many years, even before he and Ostrander met. But it was completely undeveloped. So several years ago, Ostrander found herself surveying the property with some initial consternation. "There was nothing here but trees, and I was finding it really hard to envision anything else," she says. "Then I saw the stream, and that made all the difference." Sawyer Brook-which undulates through the trees and garden, separating the carriage house on one side from the teahouse and Zen garden on the other-is the defining feature of the property. The water can be heard from almost everywhere: from inside the teahouse on its bank, and even from the master bedroom inside the carriage house. Ostrander loves to watch the brook change-not just from season to season, but from day to day. After a heavy rain, the brook can be frothy and wild, or on a hot summer's day, reflective and calm. Brook trout can be seen there, as well as crayfish scuttling between the rocks. Hanslin and Ostrander's two Boxers, Deacon and Violet, also enjoy wading in the water.

Garden designer Terri Wilcox had a reaction similar to Ostrander's when she first viewed the site. With all the trees, it was hard to imagine a garden. But in the fall, when the greenery had thinned out a little, she began to see potential.

"We made the stream a focal point of the garden," she says, and situated the teahouse to take advantage of the sight of the stream and the sound of the water burbling over the rocks. One part of this project that really pleased Wilcox was how there weren't any other buildings or landmarks to work around. She could design the garden in order to save as many trees as possible, "taking the root area of the trees into consideration," she says, "and preserving the natural order." Very few living trees were taken down. For the most part, brush removal was all that was required to clear the way for plantings.

Those plantings include red dogwood, hosta, yellow hakone grass, Henry Lauder's walking stick and Japanese maple. In the spring, more than ten thousand naturalized bulbs-including daffodils, ball alliums and hyacinths-bloom all around the property. Pink, peach and purple tulips also appear in profusion, but nearer to the house, where they are less likely to be eaten by deer and other woodland creatures.

The garden has been built up over the last four years. Wilcox says she is pleased with the way it now flourishes in three seasons, from the early spring bulbs to the ornamental grasses in late fall. Even in winter, the shapes of plantings-such as the twisted corkscrews of Henry Lauder's walking stick-provide visual interest. One aspect of the garden that Wilcox had not been sure about was the gravel Zen pond. She was afraid leaves would make it messy and that it just might not work in the woodland setting. But it turned out to be one of her favorite aspects of the garden. "I like the contradiction of the pond and the trees around it," she says.

It truly is a property for all seasons, Ostrander says, and also a place where outdoors and indoors can merge comfortably. From the windows of the second floor of the carriage house, Hanslin and Ostrander can see the stream, the bridge, the pond, the garden and the trees.

In winter, when snow is falling, Hanslin and Ostrander like to turn off all the inside lights, turn on the outside lights, sit back with a glass of wine and enjoy the effect. "It's like being in a snow globe," Ostrander says. In any weather at all, she stays in touch with the changeable stream. "I like having my cup of coffee in the morning and looking out to see what it's doing. It's different every day."