At Home in the Treetops

A family didn’t have to move far to design the perfect house for retirement and a new generation of family members. 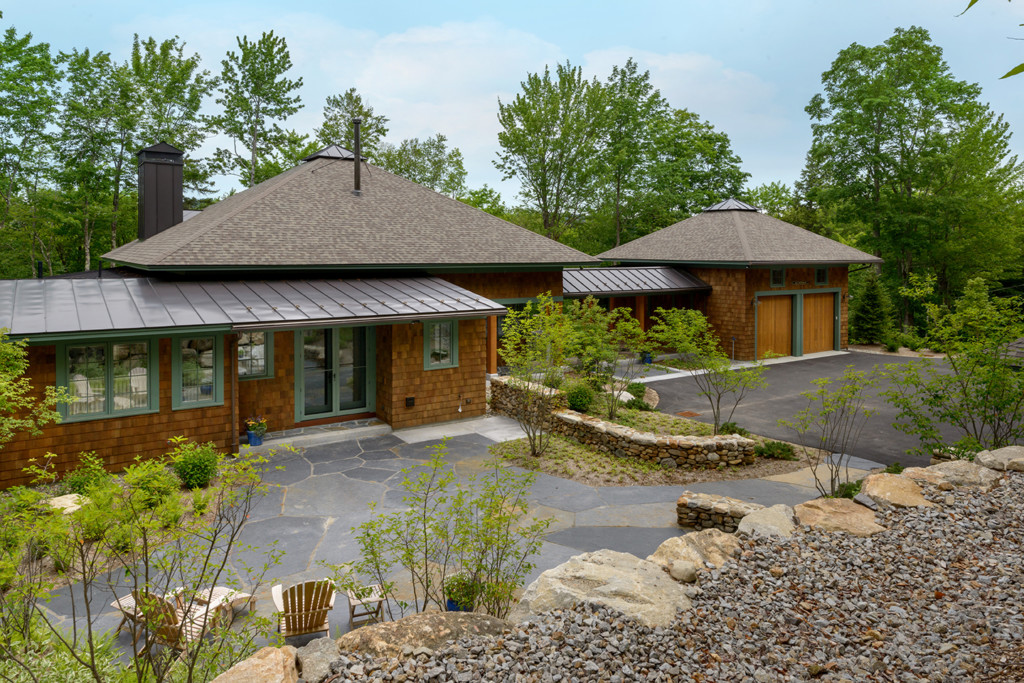 The four-season beauty of New Hampshire is easy to fall in love with, as a couple who raised their children in Massachusetts can attest to. For twenty-five years, the family spent long weekends, summers and holidays at their vacation home in New Hampshire. That home worked fine accommodating just the couple and their three children, who also loved the area and had summer jobs here when they were teenagers. “Although our children live outside New England now, they all still love coming to New Hampshire for vacations,” the wife says. “And they all love visiting at the same time.”

When the three children married and the first grandchild was born, the couple knew they were going to need more room for their growing family. In 2014, the couple purchased a home on the same street in the New Hampshire town they’d always come to, as they love the neighborhood. And during the next two years, they rebuilt that home thanks to help from Sheldon Pennoyer, of Sheldon Pennoyer Architects in Concord. It was a good thing they reached out to Pennoyer in 2014—“we had seen his work in New Hampshire Home and loved what he’d done,” the wife says. Since then, the couple has welcomed four more grandchildren to their family. 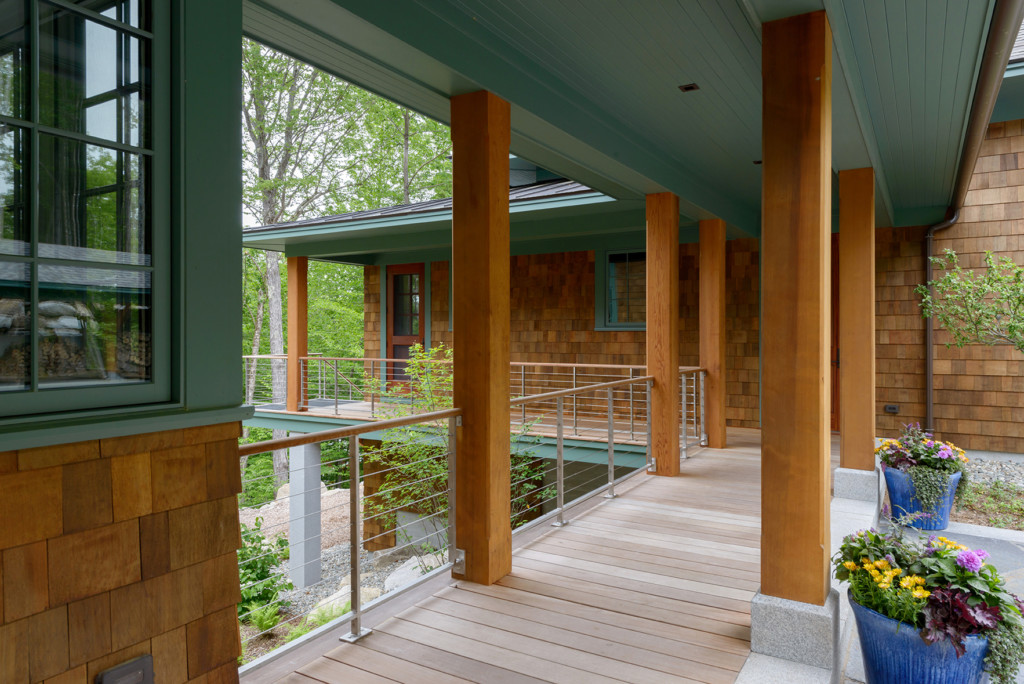 The connector between the house and the garage provides a view of the landscape beyond the house. Pennoyer says the wood floor with granite edges gives the sense of a bridge. The cedar posts pick up the tree trunks’ hue while the turquoise green trim draws the eye to the canopy of trees.

Renovating a home was not new for the couple—over the course of their marriage, the husband says, “We had done eight large-scale projects on our homes, including building additions, adding rooms and other renovations.” Plus the husband worked in commercial real-estate development and says he “can look at blueprints and live in them.” He also knows well the financial and work-flow ins and outs of real estate and is “an admirer of architects with vision and talented managers.”

As he looked ahead to retirement, both he and his wife wanted a house that was comfortable, with a master suite on the first floor, but that could also accommodate their children and grandchildren. Also on the couple’s wish list were three additional bedrooms and a bunkroom for the grandchildren when they got older. Energy efficiency and sound insulation were top concerns, too.

Pennoyer says although the nearby house that the couple ultimately purchased was a teardown, it offered better views because of its location at the top of the hill. “The site was a steep slope with granite outcroppings,” Pennoyer says, “but also gave us more natural features to work with.”

“We wanted lots of windows,” says the wife, “and for the house to feel like it was a peaceful home in the woods.” The husband says he wanted the house “to blend in with its surroundings and look like it had always been there.”

To capitalize on the site’s natural beauty, Pennoyer placed a screened porch on the northwest side of the house so the homeowners could enjoy outdoor living. “With the porch being a whole story above grade,” he says, “this gives the feeling of being in a tree house.”

“A big focus was on the way natural light and views entered each room,” project architect Renee Fair says. “This maximized the feeling of being part of nature, even from inside the house.”

“To reinforce the idea of a tree house with eaves close to the ground,” Pennoyer says, “we came up with an idea of three distinct volumes with deep overhangs.” The three pyramid-shaped roofs of the house, garage and woodshed also anchor the buildings to the hill. “I like the design a lot,” says the husband. “The buildings blend in with their surroundings and remind me of the nearby mountain peaks.” 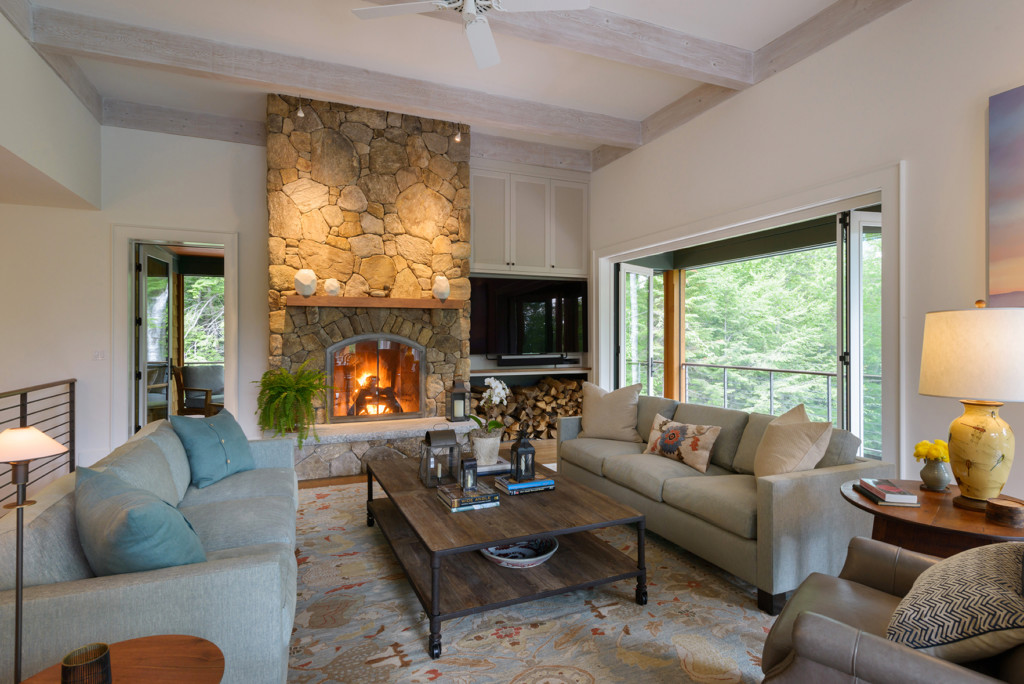 To create a warm and inviting living room, interior designer Sarah Chapin used fabrics and furnishings that were comfortable to the touch and pleasing to the eye. The bleached wood beams keep light in the space, and the stone fireplace adds a traditional touch. Jay Hufault, of Lake Sunapee Masonry in Wilmot, built the fireplace. The rug is from Landry & Arcari in Salem, Massachusetts.

The house features a first-floor master suite as well as an open living and dining room just off a roomy kitchen. Downstairs are three bedrooms—each with its own bathroom—and a den/playroom with an office area. Behind the cars in the garage is another guest suite, which the homeowners plan to convert to a bunkroom later.

The wife says she loves how the master suite is at the end of the house. “Our bedroom has three walls of windows that make the room feel like a sleeping porch,” she says.

The wife adds she loved working with Fair to organize the interior spaces. “Renee would put herself in our position and made the project run so much more smoothly,” the wife says.

The wife, who loves to cook, says Fair was especially helpful in designing the kitchen. “The kitchen is a wonderful gathering space,” the husband says. “It’s hard to get a group who has come over for dinner or cocktails to move to the living room to sit.”

As far as style, Pennoyer says the couple wanted some traditional elements—such as the living room’s stone fireplace and wood beams—and some contemporary touches. “The stair to the lower level is an abstraction of modern details,” Pennoyer says. “It looks like a waterfall and reads as one piece of wood. It doesn’t have the typical nosing, and its steel rails with wood cap give it the appearance of being thin and delicate.”

For interior design, the couple wanted to incorporate some furniture from their Massachusetts home with some new pieces. “Sheldon introduced us to [interior designer] Sarah [Chapin] and she became involved in the project early on,” the wife says. “We knew we had found the right person because at one of the first design meetings, she suggested a way for the windows to be built so we could hide the motorized shades.”

Sarah Chapin, of Sarah Chapin Interiors in Bronxville, New York, established her concept in relation to the architecture and its connection to the “woodsy, tree-top location” of the home. “I wanted to create an environment that was warm and inviting,” she says. “Bringing natural elements into the living space—along with fabrics and furnishings that were comfortable to the touch and pleasing to the eye—helped me accomplish that.” 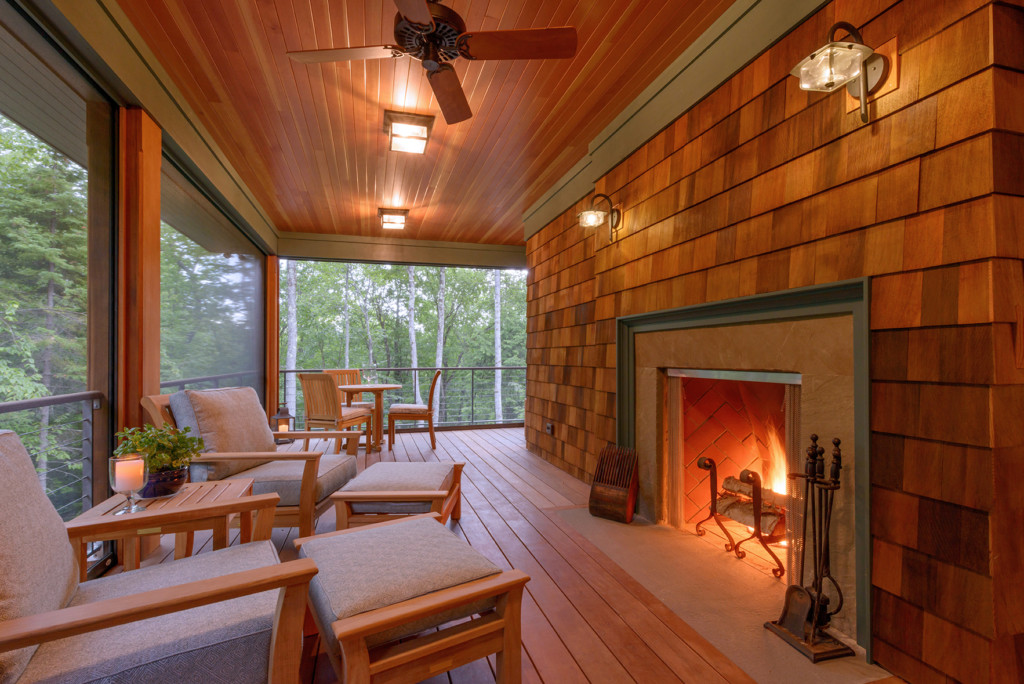 To capitalize on the site’s natural beauty, Sheldon Pennoyer placed a screened porch on the northwest side of the house so the homeowners could enjoy outdoor living. The double-sided fireplace provides warmth on cooler days.

When it came time to hire a builder, both Pennoyer and the homeowners chose Old Hampshire Designs, Inc. in New London and were delighted to work with project manager Bill Andrews. “We were impressed with Bill and had a lot of confidence in him and the Old Hampshire Designs, Inc. subcontractors,” the husband says. “Bill presented a vision of when and how he’d do things, and was one of the best project managers I’ve ever met.”

“For us, the most important aspect of Sheldon’s design was his attention to energy efficiency,” says Jay Tucker, owner of Old Hampshire Designs, Inc. “Through Sheldon and Renee, we were introduced to new products that we have subsequently used on several other projects.”

Pennoyer says the house generates about 90 percent of its heat from a ground-well heat-pump system, with a propane boiler providing the other 10 percent. The two 250-foot geothermal wells are spaced about 40 feet apart, thanks to what the husband says is the “aggressive water flow on site.” Seely Plumbing in Meredith designed the system.

The house also has a high-efficiency envelope, with 1-foot double-wall construction filled with cellulose instead of foam. For all these efforts, Pennoyer’s firm won the 2018 New Hampshire Home Design Award for Excellence in Green Design.

One of the couple’s other priorities was minimizing noise in the home. “We didn’t want to hear a toilet flush or wake up others when a child was crying,” the husband says. So the couple hired Cavanaugh Tocci Associates Inc. of Sudbury, Massachusetts, to create the acoustical standards for the home.

The husband explains that the firm placed a corrugated rubber membrane below the concrete flooring in which the radiant heat tubes are laid. “This system works very well,” the husband says. “If someone is sleeping downstairs, they can’t hear footsteps above.”

The couple also worked with Dave Pelletier of Acoustic Connection in Manchester, who did all the wiring and electronics for the televisions, WiFi and sound systems. “It was challenging to get signal through the concrete floor,” the husband says, “but worth the effort because both my wife and I love listening to music.”

After a year of design work and another year of construction, the home was completed in November 2016. Three years later, when the husband retired, the house became the couple’s year-round residence.

“The house is beautifully built,” Pennoyer says. “Old Hampshire Designs did a great job with the construction and D.S. Huntington in Peterborough did handsome millwork. Both companies put so much into this project. And the homeowners were wonderful to work with—they understand the value of good design and going through the process of seeing the design evolve.”

“We are so happy to now be full-time New Hampshire residents,” the wife says. “This is a great house and so very livable.” 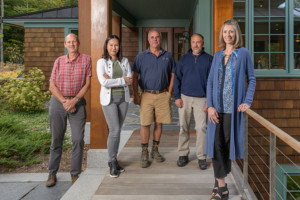 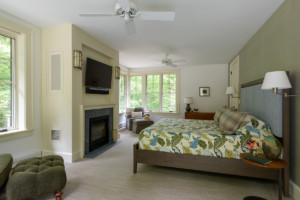 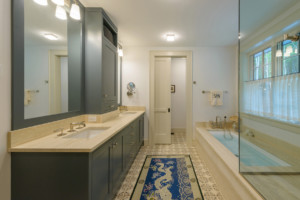 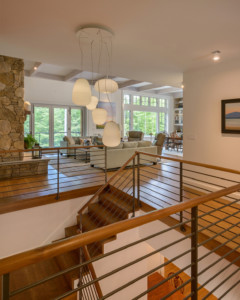 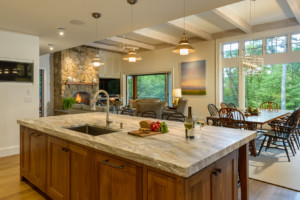 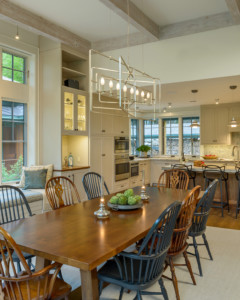 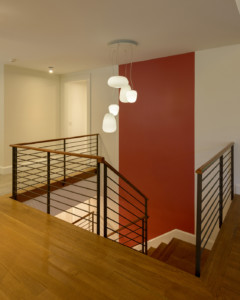 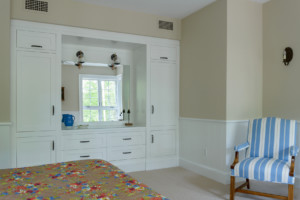 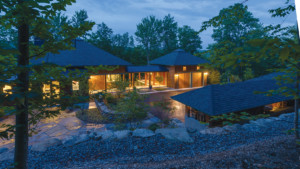