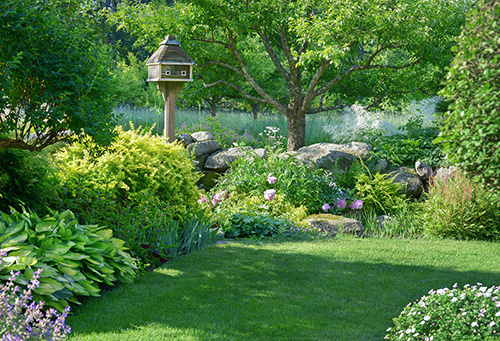 An antique purple martin house stands over this garden room, where splashes of gold surround the mixed border of hostas, shrubs and lady’s mantle.

Most of us plan our gardens around the color and timing of the flowers. Blossoms are beautiful and attract lots of attention, but they are fleeting. Foliage, on the other hand, is more dependable and has a longer season of interest.

Marney Bean finds combining plant shapes and leaf textures to be as rewarding as designing with flowers and the results last longer. “For me, it is more about texture and less about flowers,” she says. “I like to grow large masses of each plant. The quantity gives your eye a chance to rest and has a quieting effect.”

In the thirty-four years Bean and her husband, Delcie, have lived in their 1816 Dublin farmhouse, the landscape has evolved from overgrown fields to thoughtfully constructed and well-maintained garden beds and borders. “When the kids were young, we had horses, sheep, ducks and pigs; no cows or goats—nothing we had to milk!” she laughs. “There was a small overgrown garden in front of the house, and I started from there and worked my way out.”

Now, her home is surrounded with gardens and the stone walls are lined with gracefully curving beds. Still, she’s not ready to stop, and is working on a new bed with granite benches that will eventually be shaded by a newly planted bottlebrush buckeye and a flowering dogwood. “Gardening has always interested me,” she says, “and the more you learn, the less you find that you know.”

Bean grew up around great gardeners; her grandparents on both sides had large vegetable gardens. “We kids used to play hide and seek among the raspberries, eating them while we hid,” she remembers.

As a young woman, she visited friends in Canada who had a wonderful house with a spectacular garden. “They grew only four or five varieties of plants that they repeated throughout, and had a few pretty statues here and there, but it was done very well and the effect was priceless. It was a case of less is more,” Bean says. “I still love visiting other people’s gardens; each one has something to offer.”

Last summer, Bean opened her garden to the public as part of The Garden Conservancy Open Days program. Landscape designer Robert Gillmore—a regional representative for The Garden Conservancy—admires the Bean garden, calling it one of the best on the tour. “Its greatest strength is that it has matured so nicely. In terms of looks, there are enough large things for focal points. It is a well-established garden—not too new or too busy,” he says, “and the large graceful sweeps are the product of good planning.”

Inside the Beans’ garden

To even the casual observer, there is something special about Bean’s garden. Large-leaved plants—such as darmera, ligularia, hostas and astilboides—provide textural contrast. They are not just outstanding focal points but key elements in the design, as they are repeated across the landscape. The masses of large leaves can be seen and appreciated from across the lawn, while subtle contrasts of leaf shape, texture and color become apparent on closer inspection.

On the west side of the barn, cantilevered steps are built into the stone retaining wall and lead down to a vegetable garden that is as decorative as it is productive. Bean likes to mix ground covers and flowering plants with her cabbage, peppers, carrots and beets. Not just an attractive touch, this decision also draws native pollinators and other beneficial insects to the garden. “I like to grow Brussels sprouts, black Tuscan kale, cherry tomatoes, garlic, haricots verts and lots of onions, like the flat Italian cippolinis,” Bean says. “Every year, we save some of the heirloom seeds to replant.”

Other unusual plants in this patch are artichokes, endive, favas, black currants and soybeans for edamame.

A forty-foot arbor along the south side of the vegetable garden provides a shady spot for weeding breaks as well as a support for white climbing rose and kiwi vines. “We get loads of fruit. They are smaller than the kiwis you see in the grocery store, but so delicious. Just make sure you plant a male and a female vine if you expect to get any fruit,” Bean advises.

Recalling the farm that the property once was, Bean keeps chickens in an enclosure attached to the barn. “We started with six barred rocks. They used to free range during the day
until a cheeky fox got two of them,” she says. “Now I keep them fenced in.”

The herb garden is located just off the south side of the house, close to the kitchen, in an area that was originally an overgrown paddock.

After much digging, Bean built ten raised beds, enclosed them with wood and paved between them with flat Goshen stone. Two striking ‘Miss Kim’ lilacs, trained as standards, reign over all from the centers of their respective beds. At their feet, flowering purple thyme is alive with bees alongside golden oregano, lavender, alpine strawberries and coral-like curlicue sage (Artemisia versicolor ‘Seafoam’)—an ornamental salvia. Peonies, irises, horseradish, poppies, lovage, phlomis and geraniums populate some of the other beds, and the culinary herbs Bean cooks with—such as parsley, sage, chives and tarragon—are close at hand.

To keep her landscape looking lush and healthy even during the dog days of summer, Bean uses an organic approach to gardening, mulches the plants and a gives a weekly deep watering.

“My garden frustrates and annoys me at times, but most often, it makes me happy,” she says. “I love to garden, and all the hard work pays off in the long run. My garden holds up well all season because of the emphasis on
the leaves.”