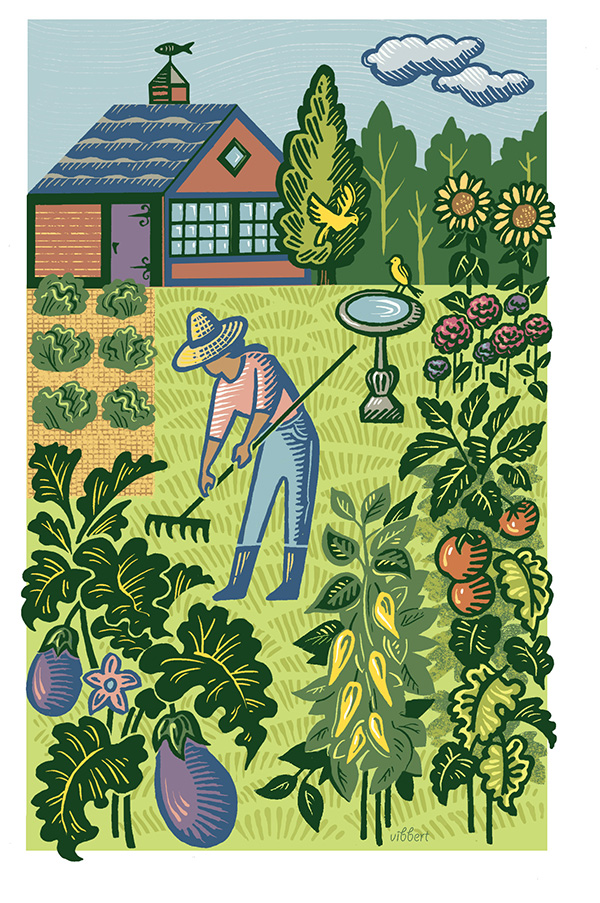 I used to be an herbicidal maniac. Woe betides any plant that found itself under the deadly-by-default care of my gangrene thumbs. Then, with the purchase of our home in 2013, my husband and I inherited a bountiful 50-foot-by-150-foot garden plot. It was so productive, in fact, that our purchase and sale agreement granted exclusive rights to its harvest to the former owners through that Hallo-ween. This yard-sized salad bowl of produce—testament to another’s perennial care and wisdom—was intimidating and, ultimately, inspiring. Undaunted by a past littered with the desiccated remains of hapless houseplants, I decided I would give gardening a try the following spring.

When the time came, I felt com-pelled to have the whole plot tilled, hoping that both the sight and the fact of the freshly turned earth would promote a sense of possibility. I settled on a still-sizeable swath nearest to the house and filled it with six seedlings each of eggplant, tomato, pepper, lettuce, basil, cilantro and parsley. To the rear, I sowed sunflowers, zinnias and cosmos. I made the rookie mistake of neglecting to set down weed-suppressing fabric—an oversight that resulted in a great deal of time bent over, laboring, sweating and swearing to myself. The good news was that seeds were sprouting and seedlings were stretching skyward. Still, by mid-July, the weeding was wearing me out, and my patience was waning. A well-timed week out of town allowed me to turn over garden-tending duties to my husband, who gamely made sure that everyone (weeds included) was watered morning
and night.

Upon returning, I headed out to the garden and discovered, shaded beneath some broad leaves, a gloriously smooth and shiny eggplant-shaped eggplant. It seemed like a sort of magic—at first there was nothing, and now there was something! And it was gorgeous and gleaming and edible! It was not magic, of course; it was plant biology: fully explicable and deeply satisfying. I was hooked.

I applied the wins (“I can grow things!”) and lessons (“All weeds must die!”) of that season to the following spring, but with a twist: the garden plot remained too big for me alone to manage, so I invited a few friends to join me. By planting time, I had a partner: a friend whose home plot was too well shaded for all her needs. We had full sun morning till night. It was a perfect match.

Sonya was an experienced and fearless gardener. I measured distances between seeds with a ruler; she worked from instinct and intuition. I furrowed my eyebrows, over-thinking whether, what, and how much to plant; Sonya furrowed the soil, getting the growing going.

Some days, we bent over our separate seedlings in tandem while our two young sons gleefully zipped about, skittering through dust and mud—at least one occasion in their little boy buff. Sonya’s infant son accommodated our hours out-of-doors in a shaded bouncy seat nearest to where she was working. We learned midway through the summer that a daughter would follow in March. And so our garden grew.

Sonya and her family have since moved away; our community garden of two is now a solo endeavor. The outsized plot has filled in with grass, and my ambitions are now no greater than two raised beds, room enough for my beloved eggplant and a few companions. My thumbs have greened up, no longer auguring doom to the plants in their midst. They may indeed have a little bit of magic in them after all, conjuring from the ground a garden in full fruit
and bloom.