There are lots of reasons for all the buzz about bees lately. 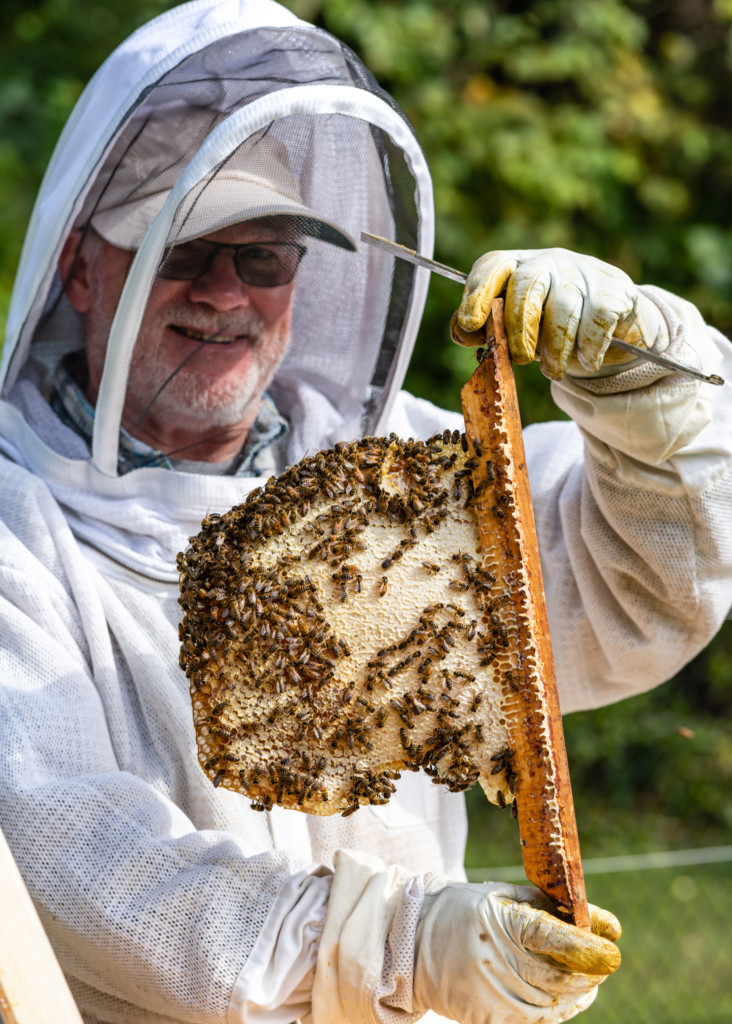 Capital Area Beekeepers Association (CABA) member Dan Ford, of Penacook, shows off a comb taken from a top bar hive located at CABA’s club apiary on the grounds of the Bridges House in Concord.

The interest in backyard beekeeping in New Hampshire is rising. Randy Harris, past president and founding member of the Capital Area Beekeepers Association (CABA) has noticed the trend. “We started the bee club in 2010 with only 17 members, it soon grew to about 40, and now we have 250–300,” he says. “Every year, 100 people go through our bee school. Even more are interested but our meeting space is limited and spots fill up fast.”

For many beekeepers, it is all about the honey—but Stephanie Green, recent president of CABA, has other reasons for doing this work. “I don’t even like honey,” she says. “I keep bees because they are the most fascinating little creatures I have ever encountered and they are so important to our environment.” Bees are essential for pollinating most of the fruits, nuts and vegetables we eat; many wild plants and wildflowers need pollination to set seed and survive another year. Green says more than half of the CABA members keep bees to do something positive for the environment. “Honey is just a bonus to them.” 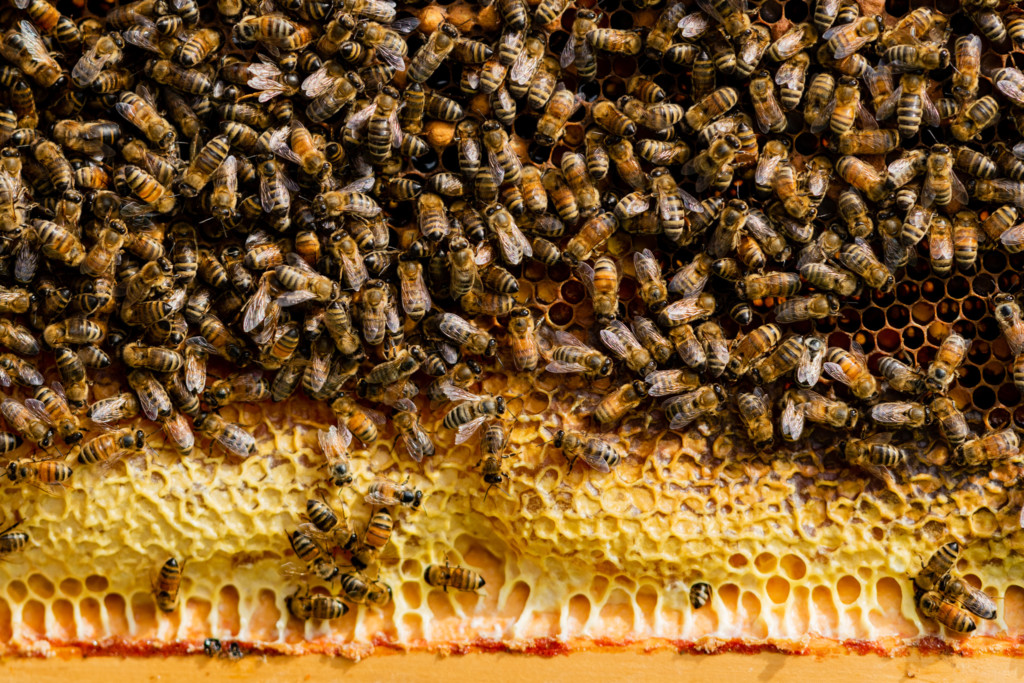 If you enjoy fruits such as apples, blueberries and watermelon, thank a bee! They pollinate about one third of the crops we eat.

The New Hampshire Farm and Forest Exposition has a beekeeping display and offers lots of information. Plan to attend February 14–15, 2020.

The New Hampshire Beekeepers Association is the statewide organization for beekeepers.

There are many other benefits of beekeeping as well. A successful beekeeper has one eye on the weather and learns to connect with nature by becoming more observant of what’s in bloom. The ability to slow down, be calm and focus when working with the hives has been shown to be of great benefit to veterans with post-traumatic stress disorder. Many people with allergies swear by local honey for lessening and even relieving their symptoms. Beeswax is a valuable ingredient in many skin care products and candles.

The buzz on bees

Within each hive is a highly structured society. During the height of summer, a healthy hive can have between sixty thousand and eighty thousand bees—and each one has a job to do. To keep the hive running, the queen is constantly laying eggs—up to 1,500 a day in summer or roughly one a minute, day and night. She is the largest bee in the hive, and lives between one and three years.

The all-female worker bees make up 95 percent of the colony. Half their life is spent working in the hive and the other half foraging. Some workers protect the queen, feed her, wash her and groom her. They also spread her pheromones through the hive letting the colony know she is alive and well. Other workers produce wax to build the six-sided cells we know as honeycomb; some workers clean and cap the cells containing bee larvae; other workers feed the developing bee babies; and many forage and pack away pollen and nectar. Workers are the smallest bees in the hive, and their lifespan is only between four and six weeks. In that time, one bee produces just 1/12 teaspoon of honey—so tens of thousands of bees are needed for honey production.

Drones are bigger than workers; they are all males and their only job is to mate with the queen. Since they die shortly after mating, each hive needs several hundred drones. Those who don’t mate and die are driven from the hive by the workers in the fall.

The hive is structured so the queen and brood are in the hive boxes below and honey storage is in the “supers”—short for superstructures—placed above the hive. A metal grid, called a “queen excluder,” keeps her from entering the supers and filling them with eggs, which would make extracting honey more difficult. The smaller workers can easily pass through the grid to fill the frames in the supers with honey. This is the honey beekeepers get to harvest.

To bee or not to bee 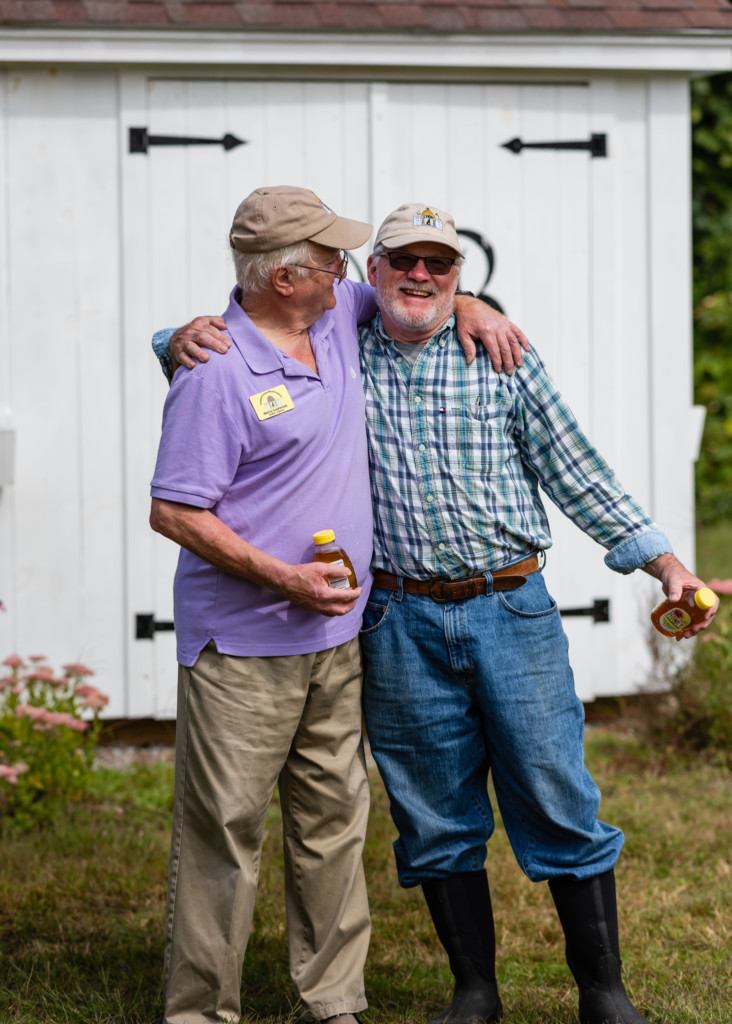 Stephen Ludwick (left), of Concord, and Dan Ford, of Penacook, both enjoy beekeeping, which they began in 2018. Every few weeks, they check the hives at the club apiary for bee strength, honey stores, brood, eggs and larvae, while looking for troublesome mites.

Beekeeping isn’t easy. “There are bee-havers and bee-keepers,” Harris says. “A bee-haver puts out the hive boxes and walks away. He has bees but doesn’t do anything with them; while a bee-keeper works with his bees and manages his hives. You can guess who has a better chance of success.”

“Be prepared for more work than you expect,” says Luke Levesque of Hillsborough. A member of CABA, he has kept bees for seven years and serves as a mentor to many beekeepers in his area. “You need to inspect your hives often, especially during spring and summer to check for mites, make sure the bees have room for honey storage, that the queen is okay and that the colony hasn’t gotten so big that it is ready to swarm. A super full of honey is heavy, and that bee suit is hot in the summer.”

Even in winter, you need to check the hives every two to three weeks to make sure the bees have access to food. “This is a twelve-month hobby,” Harris says.

The top three reasons for these losses were:

Then come losses from nosema, a type of bee dysentery; from bears, raccoons and skunks, who love honey, too, and also eat the protein-rich larvae; and from chemical and biological threats. “There are so many challenges to the bee population, and the list gets longer every year,” says novice beekeeper Roger Goode of Hillsborough.

Beekeeping is an expensive hobby, and the initial investment is high. “We figured our first 8-ounce jars of honey cost about $225 each,” laughs Laurie Hambleton. She started keeping bees with David Hunt, owner of Hunt’s Honey Fields in Windsor. He has kept bees for six years and has nineteen hives.

At a minimum, a beekeeper needs electric fencing to keep bears at bay; two, deep hive boxes with frames and several shallower supers to harvest honey from; a bee suit, or at least a veil and gloves; hive tools; and a smoker. A package of bees has about ten thousand workers plus a queen. Most bees are raised in the South and shipped north in the spring. For a higher chance of success, look for locally raised bees that are adapted to our climate. Some beekeepers have enough bees to sell a nucleus colony, called a nuc, which is about one-quarter the size of an established hive, and contains a queen, workers, brood and a few frames with combs built in.

Your first step should be joining a club and attending bee school. “Bees don’t make honey alone, and beekeepers can’t do this alone,” Hambleton says. “There is so much to learn, and the bees are constantly teaching us more. The networking and mentoring offered in a bee club is invaluable.”

There are ten bee clubs around the state, and most offer an annual bee school, usually held in January and February, where volunteers teach introductory courses on bee biology, pest management, equipment and hive care for beginners. If you are hesitant about jumping in to beekeeping, CABA maintains a club apiary at the Bridges House in Concord. Here, novices can work alongside experienced beekeepers to learn the ropes.

Bridges House was the home of Gover-nor and U.S. Senator Styles Bridges. In 1969, the property was given to the state with hopes of it being used as a governor’s residence. After a huge renovation in 2006, it is now the setting for state functions and community events.

“Capital Area Beekeepers Association was brought to my attention by my friend Anne Baker who knew of my passion for pollinators,” says first lady Valerie Sununu. “It has been my sincere delight to partner with CABA. The Bridges House is uniquely positioned to welcome all Granite State beekeep-ing enthusiasts to share, and learn how to nurture and support our most in-dustrious and prolific pollinator: the honey bee.”

Even if you have no interest in keeping a hive, you can help honeybees and native pollinators survive by avoiding use of chemicals in the landscape, planting organically grown plants (nothing raised using systemic pesticides, such as neonicotinoids) and having plants in bloom all season from early spring through late fall.

“I make it priority to be pollinator friendly by researching any product I use, by leaving the dandelions and clover for the weary traveling bees to rest and gather, and by planting flowering plants that honey bees love,” Sununu says.