The distinct design and structural evolution of the historic Canterbury Shaker Village Dwelling House is anything but ordinary. 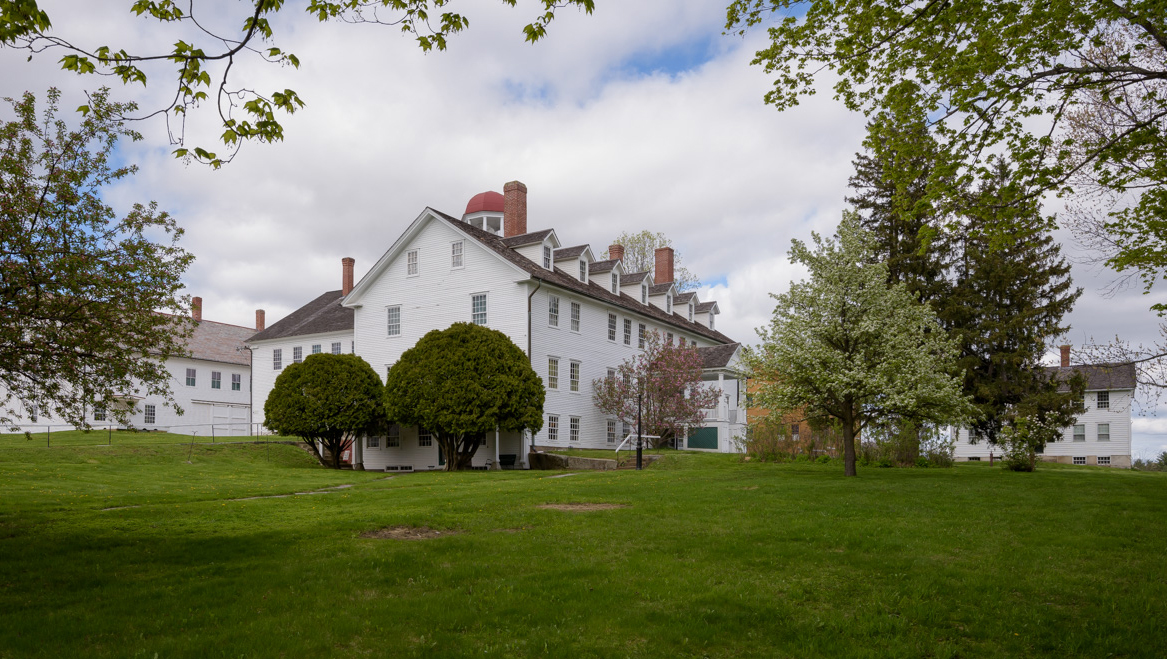 Esteemed for its architectural integrity and significance, the Dwelling House at Canterbury Shaker Village is one of New Hampshire’s most important historic buildings. It preserves the two-hundred-year-old legacy of the Canterbury Shakers and best reveals their approach to design: a style and practice that was never archaic or fixed, but rather organic, extremely skillful and responsive to the pace of their communal life.

“’Tis a gift to be simple…” proclaims a popular Shaker song. This reverence for simplicity— to live simply—is just one of the many defining characteristics ascribed to the Shakers,  a Christian communal society founded in eighteenth-century England that valued equality between the sexes, celibacy, order-liness, and communal living and ownership.

This distinct religious group, one of the most successful communitarian societies in history, emigrated to the United States in 1774. Over time, nineteen self-contained communities were established from Maine to Kentucky—including one in Canterbury, founded in 1792 on the vast farmland of Benjamin Whitcher, a convert. The Canterbury Shakers thrived for two hundred years, and were one of the most long-lived and prominent communities; their last member passed away in 1992. Since then, Canterbury Shaker Village—a National Historic Landmark and one of the most intact Shaker villages in America—now operates as a museum.

The Canterbury Shakers were very industrious. They developed and adopted new technologies as well as manufactured many important and practical items, such as clothespins, flat brooms and packaged garden seeds. Most notably, the Canterbury Shakers built beautiful buildings and pieces of furniture, highly collectible and revered today for fine craftsmanship and simplicity of form.

Even so, “We often oversimplify the Shaker’s love of simplicity,” says Rebecca Soules, daily visitor and youth programs manager
at Canterbury Shaker Village. 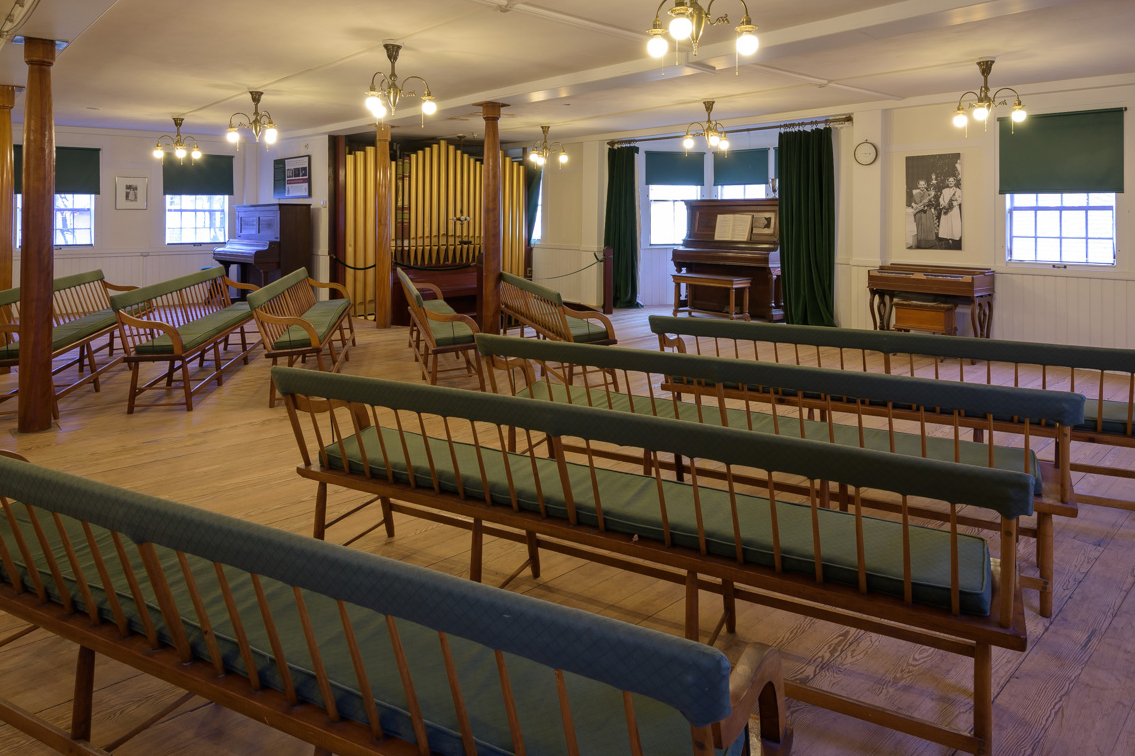 The Chapel, a multipurpose meeting space, was built in 1837 to accommodate the growing size of the community and provide a space for worship in the winter as well as an area for musical and theatrical performances.

Indeed, when it comes to Shaker design, there is more than meets the eye. The extant architecture at Canterbury, in particular, serves as one of the best expressions of all things Shaker; it is a striking artifact that allows visitors today to acknowledge a more intricate and extremely thoughtful approach toward construction and design.

The Dwelling House is one of its most important buildings, and it speaks vividly of this enduring style. “The Canterbury Dwelling House is one of the most complete Shaker dwelling houses anywhere,” says James L. Garvin, a graduate teaching lecturer in historic preservation at Plymouth State University and former state architectural historian for the New Hampshire Division of Historical Resources. “It displays the most thorough evolution of Shaker architecture. Here we have a building that embodies some of the old and some of the new. This building continued to grow and develop in a way that reflected the changing needs, growth and prosperity of the Canterbury Shakers.”

Built in 1793, the Dwelling House was the Shakers’ primary residence. It was central to their daily routines: a shared place where they slept, ate, worked and prayed. Every Shaker community had one. The one at Canterbury, however, stands out from the rest. It remains in its original location, and is the only existing Dwelling House that retains portions of its original structure and much of its first-generation, eighteenth-century detailing, including raised-panel doors, hand-forged hardware, and yellow and red washed rooms.

“When many Shaker communities grew in population in the nineteenth century, they knocked down many of their original buildings and often rebuilt spacious and grandiose dwelling houses made of brick or granite,” Soules says. “At Canterbury, they never did that.”

Instead, the Canterbury Shakers gradually expanded their building in order to accommodate their burgeoning community. They transformed a 2½-story building with a gambrel roof into a 3½-story T-shaped structure, containing fifty-six rooms, built by the Shakers themselves with locally sourced materials, such as Eastern white pine.

The first floor was primarily dedicated to preparing and eating food, equipped with a large kitchen, bake room, meat cellar and pantry. The second and third floors provided sleeping chambers and common areas. 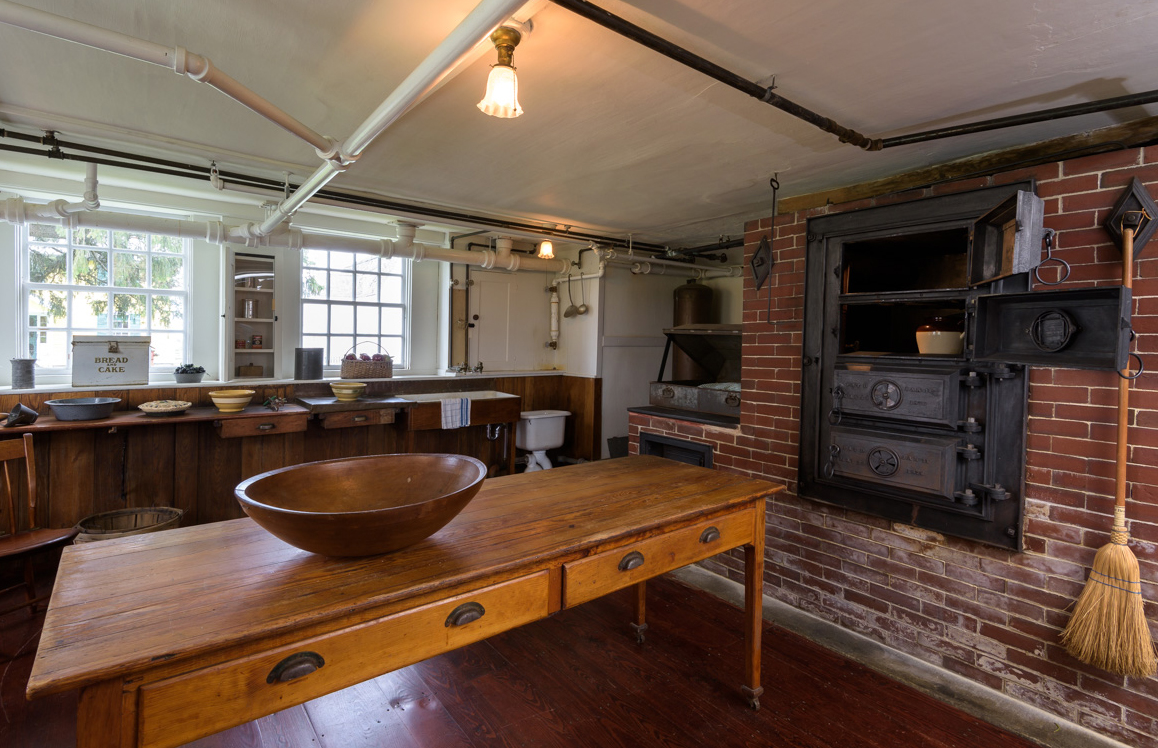 Food preparation and storage was a major endeavor in the Shaker community. The Dwelling House’s Bake Room contains a revolving bake oven patented by a Shaker sister. Its four shelves could cook as many as sixty loaves of bread at one time.

Throughout the building, members were both joined and divided. There were designated rooms for men on one side of the building and women on the other. The Shakers also used gender-specific doorways, staircases and storage facilities, but shared some communal areas, such as the chapel and dining room. The architecture, therefore, was designed specifically to accommodate the Shakers’ fundamental principles—most of all, the desire to live celibate and harmonious lives together.

The Dwelling House received its greatest modifications throughout the nineteenth century: eighteen-foot-long wings were added to the east and west ends; a twenty-foot-square wing was added on the north side; the roofline was modified; a belfry (used to call members to meals and work) was affixed; and new rooms were designed, including a fifty-two-by-forty-three-foot chapel and an extensive attic space for the storage of out-of-season clothing.

This attic, in particular, is one of best-preserved Shaker storage areas in existence and best exemplifies the Shakers’ love of order. It is fitted with six closets, fourteen cupboards and 101 drawers, ordered in a symmetrical arrangement like the general layout of the building itself: women on one side, men on the other. “Your average New England attic is a cluttered mess,” Garvin says, “but this was an attic that was governed by rational thought, efficiency and the equality of the sexes.” 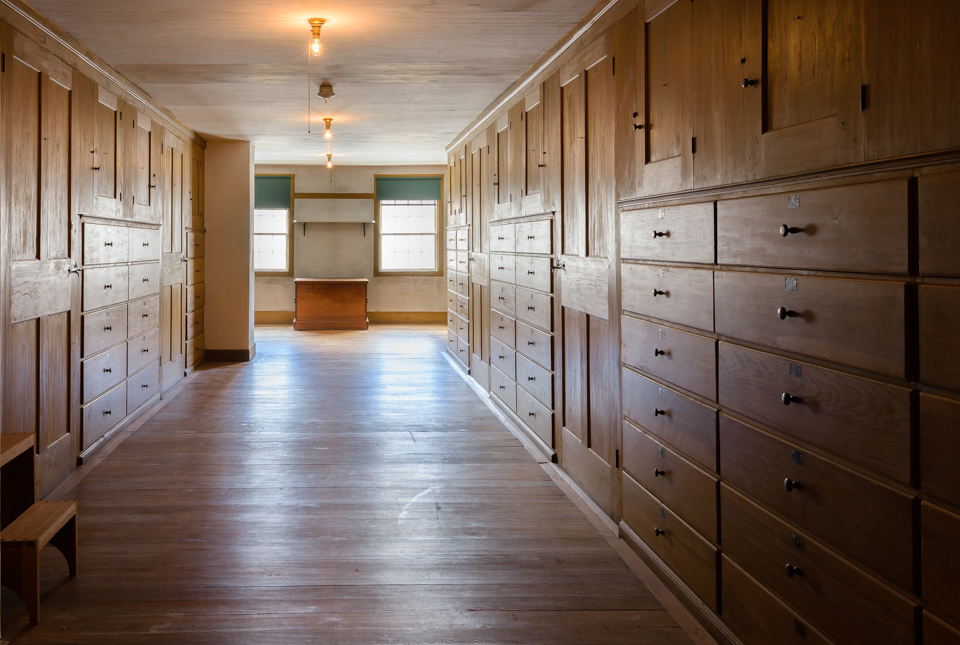 The Sister’s Attic is one of the building’s most unique and best-preserved spaces. The built-ins—made of pine and basswood, and varnished with a pale yellow wash—were used to store seasonal clothing and items. The attic is fitted with six closets, fourteen cupboards and 101 drawers.

The building also underwent major technological and stylistic evolutions. Unlike the Amish, the Shakers embraced technology, and were often the first of that period in New Hampshire to install and use cast-iron stoves for heat, electricity, telephones and indoor toilets.

Stylistically, the Shakers were not old-fashioned either. They preserved the austere and unornamented spaces from the original building, but also redecorated rooms with Victorian wallpaper and furnishings as well as twentieth-century linoleum. “The Shakers loved linoleum because it was easily cleaned,” Soules says. “So in a sense, it effectively contributed to their love of neat spaces and order.”

Overall, the Dwelling House does embody a simplified architectural form—one that refrains from ornamentation and extraneous detailing—yet there does exist an often-overlooked complexity to this seemingly simple design aesthetic, an inconspicuous intricacy that speaks volumes of Shaker craftsmanship.

“The Shakers thought carefully and rationally about the essence of what they were trying to build,” Garvin says. “They were much less influenced by the changing architectural styles of the time. Instead, they looked at something like a staircase and reduced it to a great simplicity—to the essence of what it needed to be.”

The Dwelling House’s double staircase, one of the building’s standout features, is an example of this practice. Its sinuous, hard maple handrail fitted with interesting newel posts, rhythmically winds its way up through the entire building. Garvin sees this feature as an “independent invention,” one of the highest workmanship.

“It’s very difficult to make a handrail like that because you need a big piece of wood to carve away at in order to get that winding curve,” he says. “That is something you can easily overlook. It looks simple and is pretty, but you might not realize how much effort and knowledge of wood and the use of wood was invested in such a simple feature.” 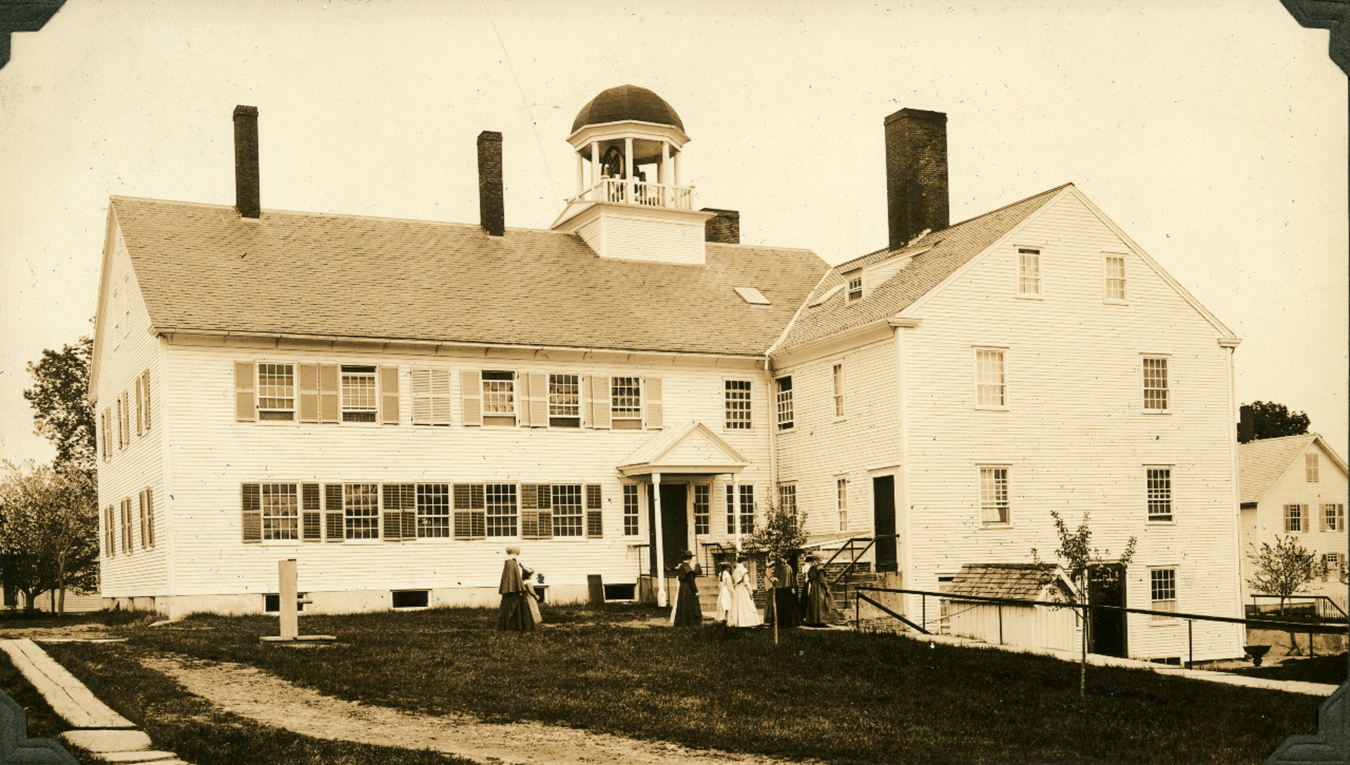 An exterior view of the Dwelling House circa 1900. The domed cupola’s five-hundred-pound bell was cast for the Shakers by Paul Revere & Sons of Boston in 1832 and was installed in 1837; it still functions today.

The Shakers regarded work as worship. They saw God in the details—unseen or unassuming features were just as important as those that were more prominent. “Everything they did—cook, clean or build—they saw as part of their devotion,” Garvin says. “Therefore, they did everything to the best of their abilities. They invested so much time in what they did to make it perfect and pure. The idea that ‘work is worship,’ I think, accounts for the beauty and fine craftsmanship we admire so much today.”

Although the Canterbury Shakers may be gone, their architecture serves as an enduring and telling manifestation of their approach to design.

Shaker simplicity may be forthright and beautiful, an aesthetic many wish to attain within their own homes for
a sense of order and harmony, but as the Dwelling House reveals, its architecture is just as complex. Its refinement and evolution speak of clever designers informed by faith, hard work and community.

Today, Canterbury Shaker Village endeavors to reassess these details. “A part of our mission is to rethink tradition, and to figure out how Shaker beliefs, traditions, even their architectural practices are relevant to the twenty-first-century lived experience,” Soules says. “Hopefully, every visitor who comes here can find something within the village that resonates with them, something that has an impact on their daily lives.” 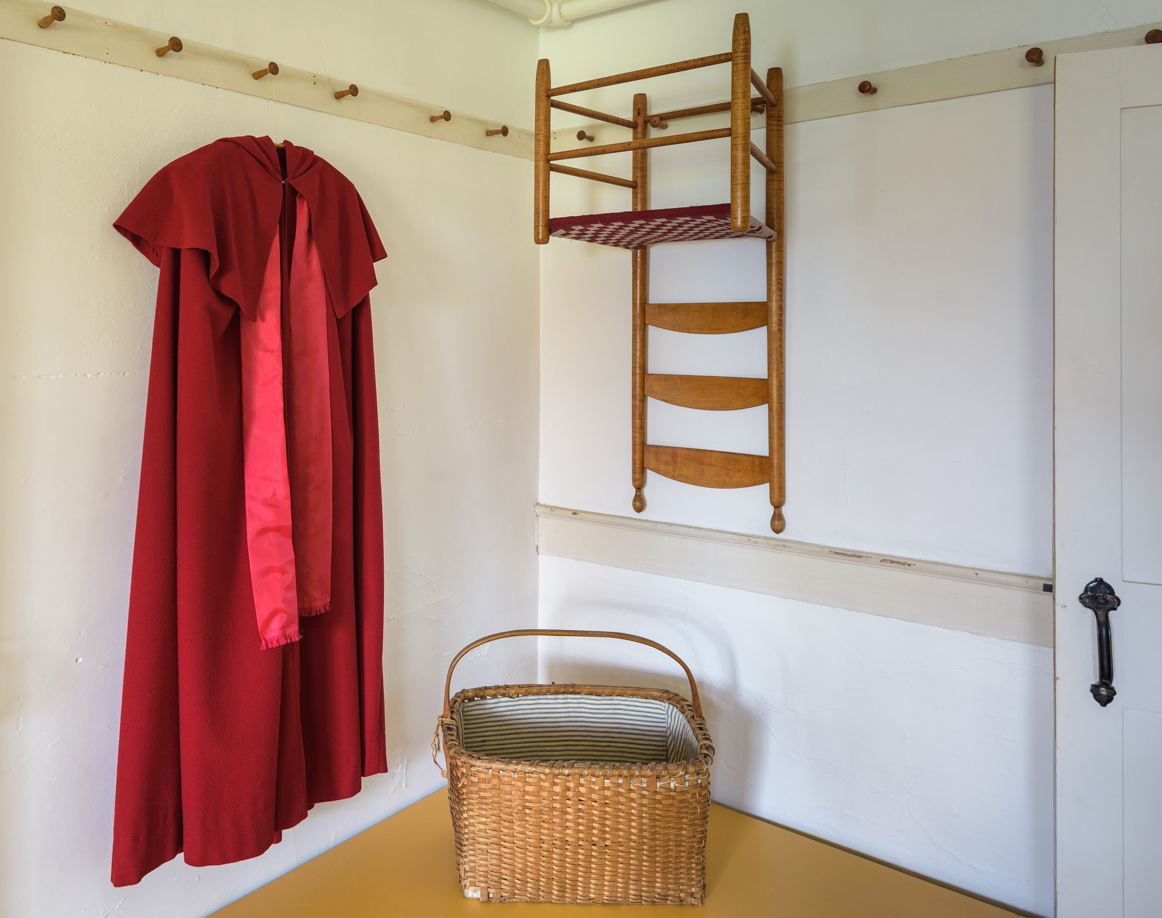 Several rooms throughout the Dwelling House now serve as gallery spaces where visitors can learn more about Shaker life and admire the fine craftsmanship of their furniture (many original pieces are on display) and the building’s distinct architectural details, such as the pegrails.

Canterbury Shaker Village is open daily through October and on weekends in November (check the website for seasonal hours). Admission fees support the preservation of the village, its collections and visitor programs. General admission includes all guided tours, exhibits and self-guided areas. Admission is $19 ($10 in November); $9 for children ages six through seventeen; and children younger than age five are admitted free of charge.