Built in the 1880s, this elegant residence in downtown Portsmouth once again has passers-by tipping their hats. 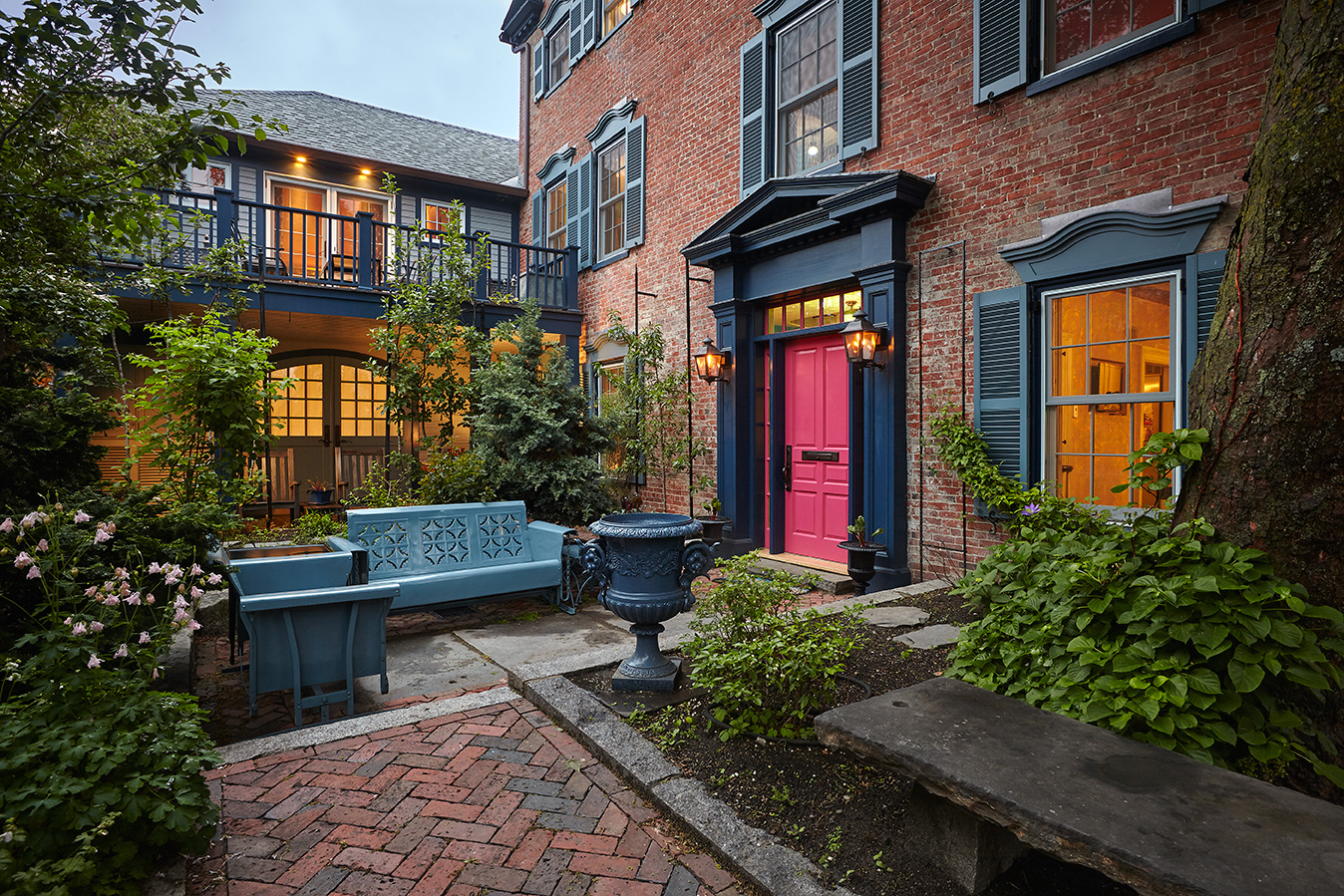 When they found their soon-to-be home, their sense of recognition was immediate. “We loved the character of the house. It had a quiet authenticity about it,” the homeowner says. “It wasn’t overly grand. The house was strong and solid. I loved its scale and proportion. And, it had a garden entrance. Clearly, the house needed some major renovation, but it had good bones.”

As she dug into the history of their house, she learned that it had originally been a warehouse and was converted to a home in the 1880s. Most recently, the house had been used as an office. 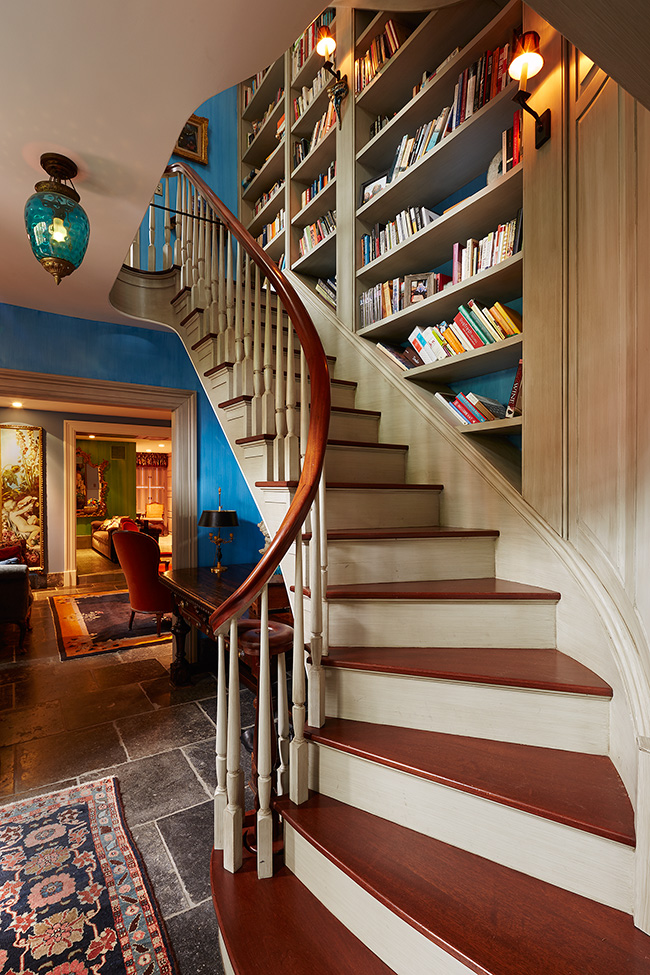 The center stairwell was rebuilt to include bookcases. Heat-retaining stone on the first floor enhances radiant floor heat.

Inside, they discovered a graceful stairwell, a testament to Portsmouth’s renown for fine woodworking. The front parlor had its original, large casement windows, still glorious even though thickly coated with untold layers of paint. In general, the rooms were pleasant and cozy. Off the parlor, a stairway led down to the basement; in the kitchen, a back door opened to the street. The floors slanted a bit, and there were three old fireplaces.

The big question was: how might they transform this building back into a residence, and most important, into their home? For these homeowners that was simple: make a plan, build a great team and keep the communication going, right down to the last details.

“She has that wonderful New York energy,” says architect Lisa DeStefano of the homeowner. “They were very appreciative of the history of the street and the town.”

Even when the homeowners were traveling, DeStefano, of DeStefano Architects in Portsmouth, found them very accessible. “Once we got the building stabilized structurally, we did a lot of 3D sketching,” DeStefano says. “They’re both very visual, and we could sketch side by side, working remotely. They could easily imagine themselves in the space, and this kept the project moving forward.”

Working with DeStefano and Jeff Jones of Maine Coast Builders in York, Maine, the homeowners had the exterior of the house restored. This included repointing the brickwork as needed, designing the garden and installing period hardware. Once again, pediments were placed over the windows, so the house no longer had that surprised “no-eyebrows” look. A small addition with a garage and master bedroom suite was built as well.

Inside, doorways to the kitchen and living room were widened. The basement stair was relocated to a spot in the back of the house, which created room to build a capacious kitchen pantry.

“Because our front windows are very exposed, we decided that the casual activity of the kitchen would fit well there,” the homeowner says. “So, we moved the kitchen into what had been the parlor and created quieter, more private spaces in the back.”

To make room for the stove and a long counter, a fireplace was removed. The casement windows were stripped and, in some cases, rebuilt. For privacy, Jones made Indian shutters. 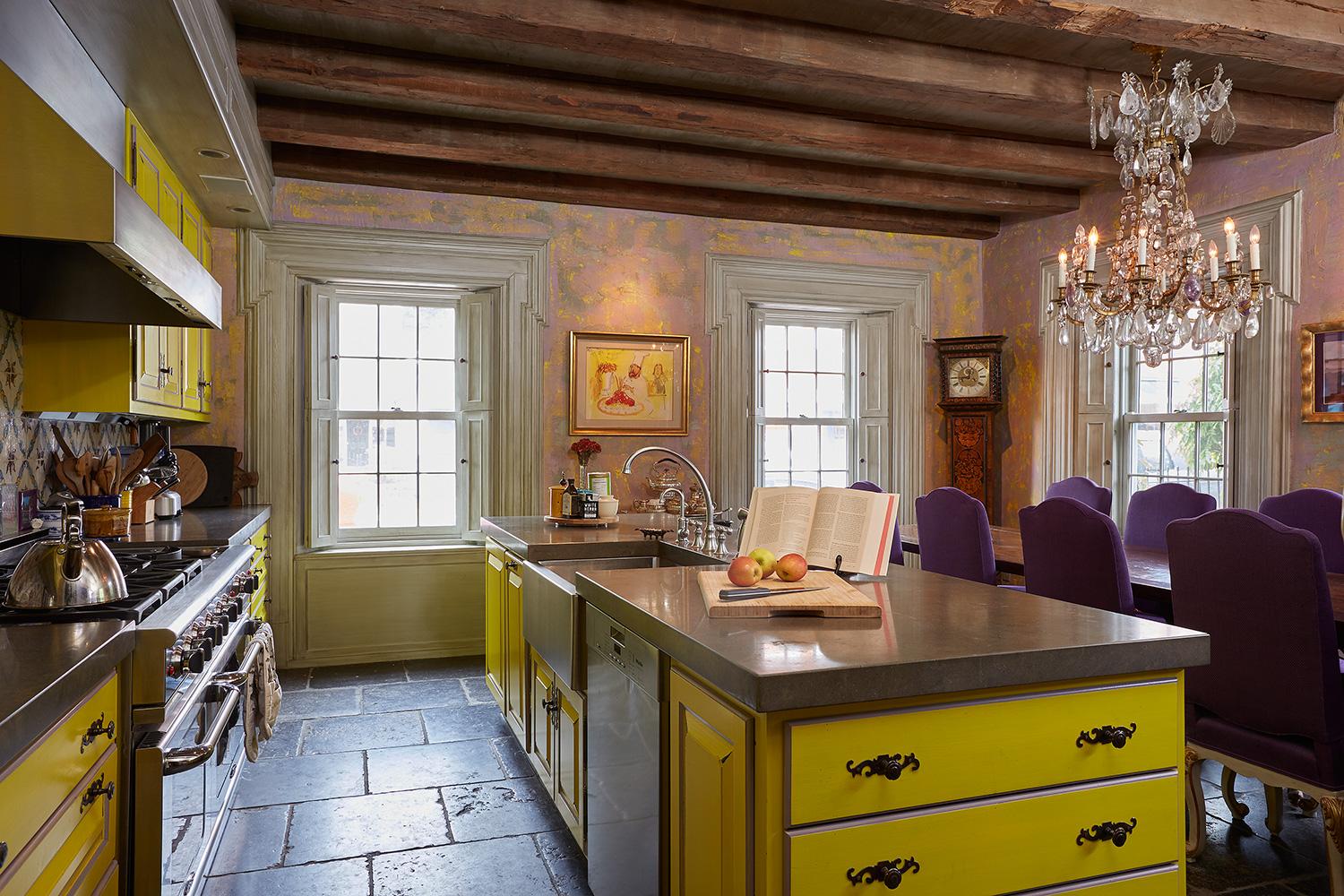 Spare and elegant, the kitchen/dining room combines functionality with exuberant color. The backsplash is made from seventeenth-century Dutch tiles and the chandelier is eighteenth-century French. The walls evoke old plaster walls found in Tuscan homes.

For people who love their books, a home is bereft without them. “Culling our books was not at the top of our list,” the homeowner says. “We did do some sorting and winnowing. It was a pleasure to realize that having them was an option.”

Jones took the stairwell apart and rebuilt it. This time, built-in bookcases were included. “That was my favorite part of the job,” Jones says. Bookcases were also incorporated into the upstairs hallways and library.

The stairwell is built so precisely that the bottom step is formed a bit irregularly so that one can step off it toward the kitchen as well as to the front.

The banister already boasted one volute, the turned mahogany curl that is its finishing touch. But Michael V. Wise, a Portsmouth woodworker, created a match for the other side. “The volute was developed by the Greeks,” says Wise. “It hasn’t changed much since then. I just did what the guy a couple of hundred years ago did.”

In concert with rebuilding the stairwell, radiant floor heating was installed, followed by laying down resourced French petit granite tile in the kitchen and living room. Patterned cream and gray cement tiles were installed in the back foyer. The combination of radiant floor heating with stone and concrete tiles creates steady, draft-free warmth.

Mason Jim Leslie, of J. B. Leslie Co. Inc. in South Berwick, Maine, rebuilt the fireboxes for the remaining fireplaces in the living room and library. He specializes in building a modified Rumford design to fit existing spaces. The library’s fireplace surround was built from local fieldstone. For the downstairs living room, Leslie made the fireplace’s limestone surround from scratch.

The homeowner, whose taste favors European antiques, notes that the design is from Normandy. Looking at the surround, she notes, “Jim did a beautiful job on that.”

As the project developed over many months, so did the buzz on the street. Someone might buy a snack at a nearby shop and dally a bit. Or, when the homeowner grabbed a morning coffee, someone might ask, “How’s the house project?”

Bringing in the color!

When it came time to paint and plaster, the homeowner notes with real understatement, “I am not afraid of color.” Plus, she had a clear vision of what she wanted. Luckily, she met her match with painter Jeff Weyers of Weyers Painting LLC in Eliot, Maine, and then plaster craftsman Chris Janes, of Janes Corp. in Portsmouth.

“I knew I wanted a red library,” the homeowner says. “And the crystal chandelier with the amethyst drops would go in the kitchen along with the Dutch and Portuguese tiles. I wasn’t going to reupholster everything, so working with orange and purple was a given.”

Weyers learned his trade from his Dutch father who is also a fine arts painter. Collaborating with the homeowner, he mixed paints, added antique glazes, and experimented with textures and transitions. The homeowner wanted a gray cream for the woodwork, feeling that white for a house of this vintage was not appropriate. Consequently, the woodwork is lightly streaked, adding a texture that is more felt than seen.

The kitchen’s color scheme builds on the homeowner’s cherished early eighteenth-century French chandelier and specifically on a pair of seventeenth-century Dutch tiles, featuring a very regal cat and dog. And there lay the origins of the kitchen’s purple, citrus, blue, mauve and sepia hues. “Purple is a color that can really go bad when you’re decorating,” the homeowner says. “However, I had done this color scheme in New York, and I knew it would work. But the plastering was another matter. Chris Janes was so willing to experiment. I wanted the walls to resemble a very old plaster wall in a Tuscan home.

“People were very tactful when I’d describe these color schemes,” says the homeowner with a smile. “But Chris pulled it off.”

Upstairs the library is a brilliant red. Standing in the room, the color is both enveloping and energizing. “It’s two reds,” the homeowner says. “Often historic colors can be dull and flat looking. But here we juxtaposed an orange-red for the walls and a blue-red for the trim. Because of the variation, the light dances and the room feels
very alive.” 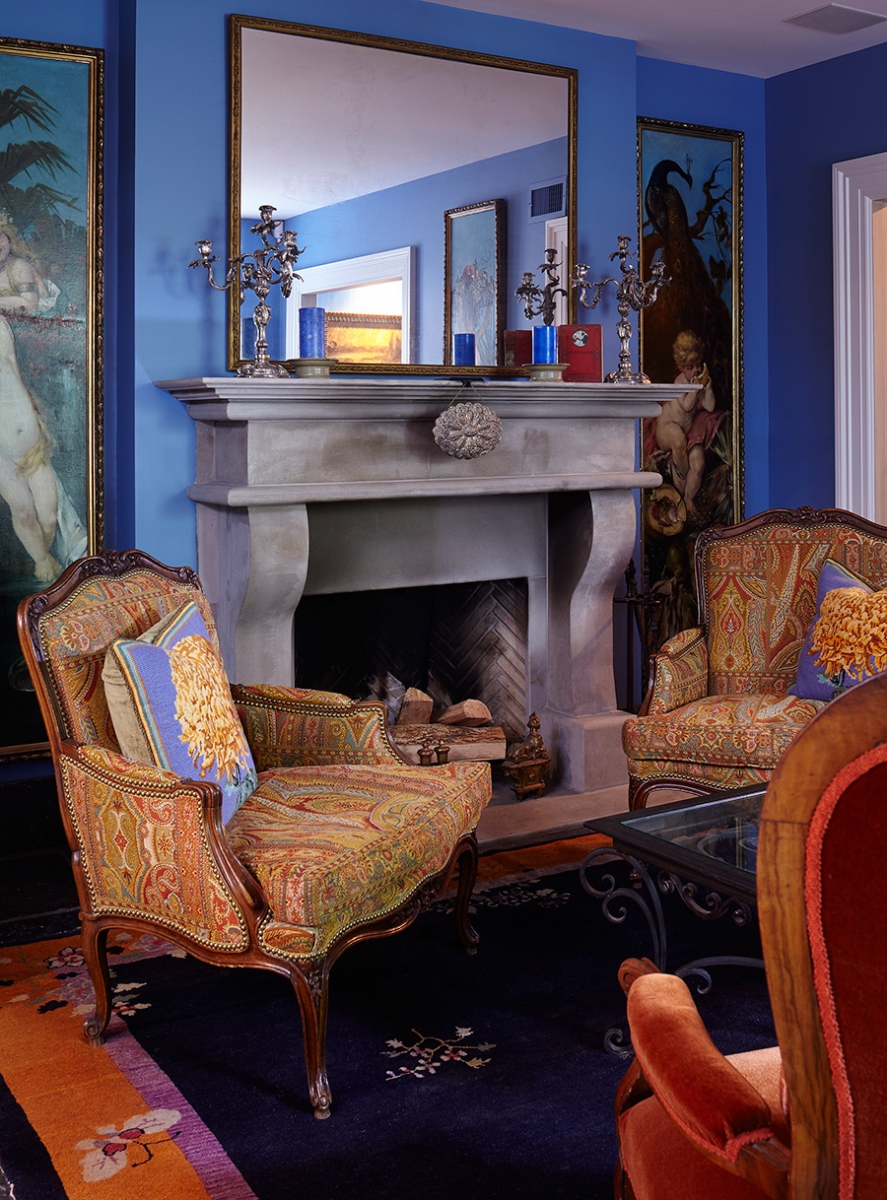 The look of this living room is formal, but the feel is relaxed and comfortable. The limestone fireplace surround was custom made.

Downstairs, two eighteenth-century French sconces light the back foyer. This elegant, carefully designed space is paneled and painted mauve accented with blue, complementing the rug, drapes and upholstered chair. Concealed behind the panels are a large closet and small downstairs bath.

From the foyer, one passes through a comfy media room—painted a deep emerald green—and then into the downstairs living room painted in that deep shade of French revolutionary blue. And although these downstairs rooms are open, they are clearly separate rooms, defined by color rather than by walls.

“I love decorating,” the homeowner says. “But by design, I want it to be durable. I don’t want to fuss with it.”

Now, a few years later, their home feels very settled. With its conversational spaces and comfortable furnishings, it inspires one to sit by the fire, have a glass of wine and talk about books. 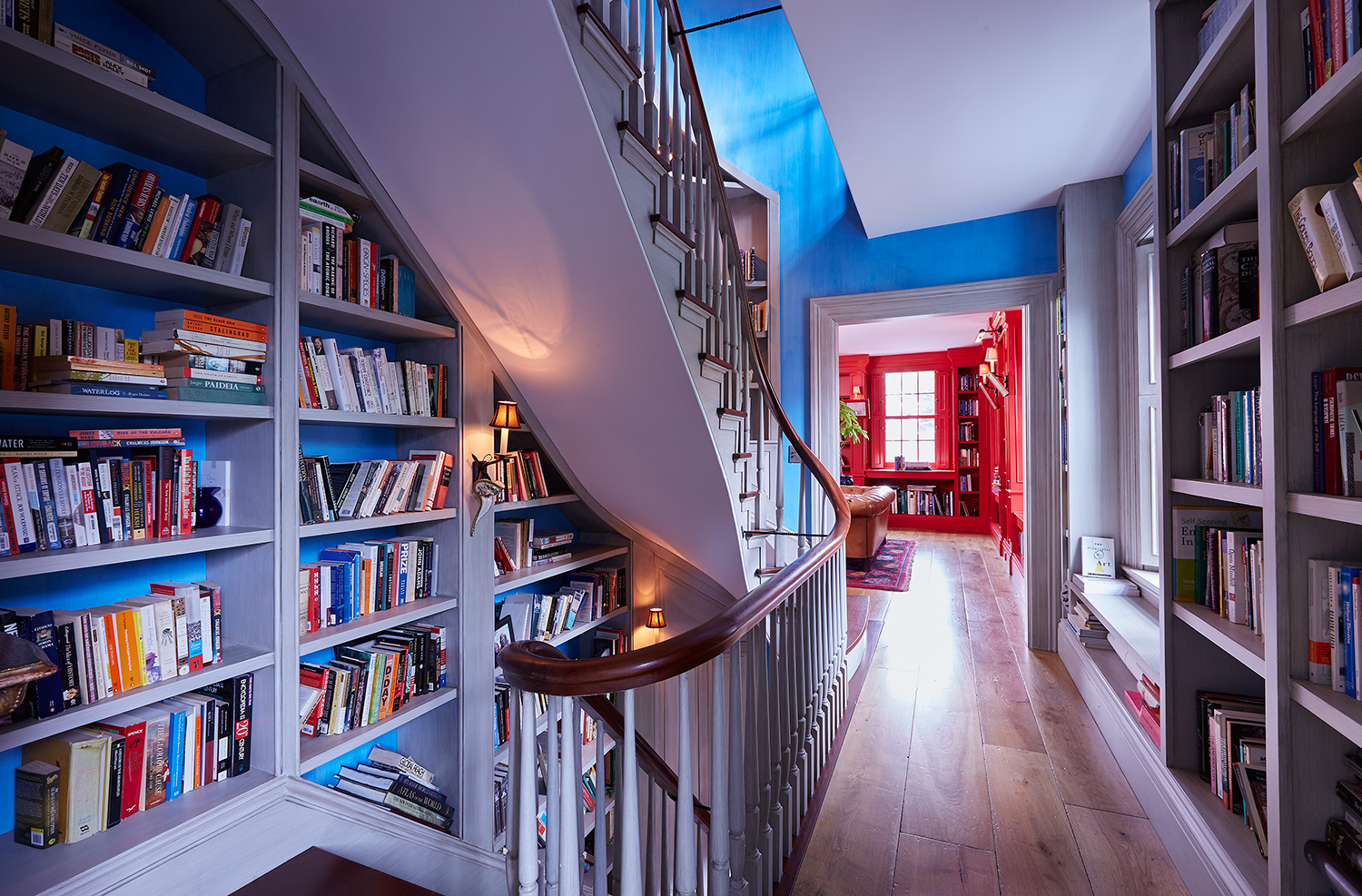 Views of the stairwell reveal sinuous lines that gracefully connect one floor to another, from top to bottom.
Categories: Architecture and Interiors