Building a chic and fun space for teens

A third floor is transformed into a stylish retreat for a couple’s two preteen daughters. 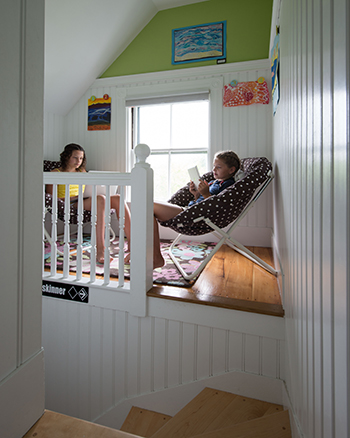 Surrounded by their colorful artwork, sisters Isabelle (left) and Ophelia relax in their cozy third-floor “nook.” The family worked closely with contractor Iain Moodie of Portsmouth to make the space teen-friendly. The cheery overhead light (facing page) was designed by Kim McCue of KM Lighting & Design in Portsmouth.

The challenges of renovating an older home can often be overcome by creativity.

That’s what one Seacoast family discovered when they moved to Portsmouth, drawn by the city’s unique sense of community. “We’d lived in Portsmouth before, and loved the city’s character and missed the quirkiness of living in an older home,” says Katherine the homeowner, who prefers to only use her first name. So, in 2008, Katherine and her husband, Jeff, purchased a circa 1900, four-bedroom house that was in good shape but needed updating.

Iain Moodie, a local contractor and builder, was the homeowners’ go-to resource for the necessary renovations. He considered the New England-style home a “typical” older house: “Nothing was really level or plum, and you have to create more interior space,” he says. Updates included putting on a new roof, replacing the heating system and furnace, and rebuilding the front porch.

Another must-have: an enjoyable, comfortable space for Katherine and Jeff’s two daughters, now ages nine and eleven, who were fast approaching their teen years. “Our older daughter had just started middle school, and we really wanted a nice space for them both to enjoy,” Katherine says. Thinking creatively led to teen-friendly rooms that are comfortable as well as memorable. 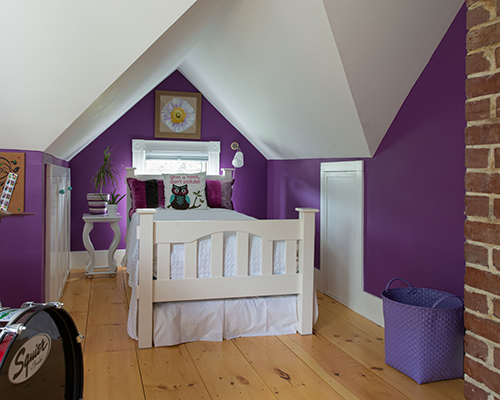 Painted a vibrant purple, this bedroom is a cheery teen space. Contractor Iain Moodie created additional storage space by building closets into the wall around the bed. The orchid painting over the bed, as well as the bedspread, bed skirt and accent pillow are from Somnia in Portsmouth.

The home’s third floor became the designated teen space. The first challenge was changing out the third-floor stairway, which was carpeted. The floor underneath “wasn’t worth refinishing,” says Moodie, so he rebuilt the staircase using maple boards and installed white beadboard on the walls. The beadboard extends into a small landing area, which was transformed into a cozy nook with pine floors, a window and comfy seating—a perfect place for the girls to relax, listen to music or do homework. The walls above the beadboard are a vibrant spring green, complemented by
children’s artwork. A whimsical green and blue polka-dotted light fixture, designed by Portsmouth craftswoman Kim McCue of KM Lighting & Design, completes the look.

The showpiece of the third floor is the bathroom, formerly a space where there was little more than a claw-foot bathtub. All slanted walls and angles, the room was gutted and leveled. When the roof was replaced, Moodie installed a skylight, which brightened the room with natural light. Small closets and storage were created where there was seemingly no space. “I utilized the eaves for potential space,” Moodie says.

The room was transformed with tile from Portico Fine Tile & Design of Portsmouth. Using an upbeat color palette of spring green, powder blue and bright white, one wall (which includes a large, wall-mounted sink and cabinet) is completely tiled in all three colors. The floor is powder-blue ceramic tile, and the claw-foot tub was replaced with an updated shower and bathtub, surrounded by green, frosted glass tile and a glass shower wall. “We really decided to go for it,” Katherine says. “I hadn’t thought of tiling an entire wall until I spoke to the people at Portico. Their idea was brilliant.”

“The bathroom is fun and unique,” says Brett Cooper of Portico. “Many homeowners introduce primary colors in the bathroom via towels or light fixtures, but this family took the plunge with tile. There’s nothing boring about that bathroom!” Combined with Moodie’s custom-built storage solutions, the bathroom is memorable and useful.

Each of the Katherine and Jeff’s daughters has her own bedroom, tucked under the eaves. Echoing Katherine and Jeff’s preference for bold colors, one room is painted a deep purple; the other, Surf Blue by Benjamin Moore. In both spaces, old carpet was ripped out and replaced by barn board floors. Moodie built custom shelves in the walls, easily accessible to the sleeping areas. Brian Gahan from Somnia in Portsmouth simplified the space, says Katherine. “He has a great eye for pulling things together and making the space consistent, which makes it comfortable,” she notes.

One unexpected challenge of living on the third floor was moving in the bedroom furniture: beds couldn’t fit up the narrow stairwell and were moved in via a bedroom window.

The finished rooms are a retreat for the girls and their friends, a place where they can practice music to their hearts’ content: one daughter plays drums, the other recently took up electric guitar.

Katherine and Jeff are thrilled with the results. “It’s a good space,” says Katherine. “The girls like their rooms. It’s a space they can be proud of as well as hang out with their friends.”