Building a net-zero home for the long term

A Concord couple designs a home that produces as much energy as it uses—and allow its occupants to easily age in place.

Harold and Laura Turner had a particularly ambitious list of goals when they set about designing their new house in Concord a few years ago. Like all prospective homeowners, they envisioned a beautiful, comfortable home. But they also wanted to build one that was self-sustaining in terms of energy (a net-zero home), that they could age into and that would serve as a leading-edge example of both kinds of houses—a kind of living laboratory so others could discover how to build more efficient and age-appropriate homes in the future. 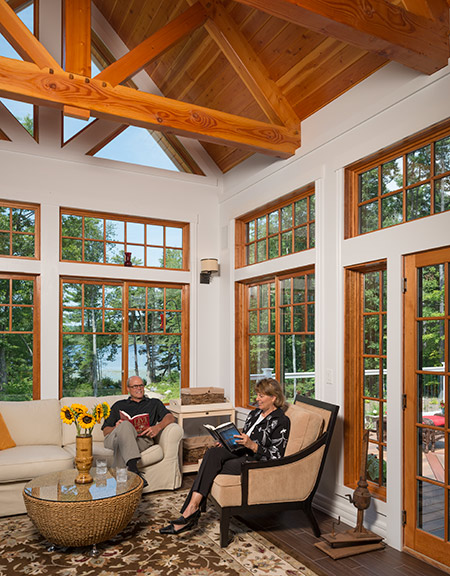 A three- season room allows Harold and Laura Turner to enjoy the comforts of home with views of the great outdoors.

The Turners’ home is in a rural neighborhood in the city of Concord, surrounded by 6.74 acres of conservation easement along the shore of Turtle Pond. The footage for the finished living space is 3,300 square feet, but Harold estimates the actual living space to be closer to 3,100, due to the thickness (about one foot) of the house’s walls. The two-level house is on a sloped piece of land, with grade access at both levels (the surrounding earth serves as insulation).

The upper level has all the rooms the Turners need on one floor, and includes living and sleeping areas as well as a kitchen, bathrooms and a washer/dryer. The lower level can accommodate guests and can also be used for a caregiver suite, should it be needed in the future, or for “multigenerational living” for extended family.

In addition to the home’s renewable-energy design, which includes geothermal heating and solar panels, all materials used were chosen with an eye for sustainability and durability.

Given Harold’s role as president and chief executive officer of The H.L. Turner Group Inc.—a Concord-based team of architects, engineers and building scientists that is nationally recognized for award-winning environmental building design—it is not surprising that he embarked on a project like this. His home is dubbed the ROSE Cottage Project because it is constructed using the Turner Group’s ROSE (Renewable energy production, Owner driven spatial design, Sustainable building practices and Energy efficient construction) construction method.

“We didn’t build a house just for the sake of building a house,” Harold says. “We built it for ourselves but also as a demonstration project, as a kind of net-zero example for people who might want to do something similar.”

He continues to take numerous measurements of the house’s efficiency, and a great deal of documentation and helpful information can be found on the ROSE Cottage.

In addition, Harold and Laura viewed ROSE Cottage as a way to try out new materials and ideas that weren’t available when they built their last home in Goffstown thirty years ago. “Even five years ago, not many people were talking about net-zero energy homes,” Harold says. “Ideas and materials for energy efficiency are evolving at a rapid rate now, and the possibilities for creating a self-sustaining home are more numerous than before.”

The Turners had another motivation for building a new home: they were now a family of two instead of four. With two grown children, Harold and Laura began considering a different home style where they could remain for the long term.

“The entire house was designed around aging in place,” Laura says. That meant one-floor living, other adaptations and a home design that won’t require a scientist to operate.

“We wanted a home that wasn’t so ‘smart’ that you can’t run it when you’re older,” Harold says. “We all know we won’t be as sharp as we think we’re going to be.”

Planning for a reduced footprint

The Turners started planning their new home about five years ago. From the start, they wanted to find land in Concord near Harold’s office, so his commute would be shorter. He can now drive, bike, or walk the approximately two miles to the office. Construction began in the summer of 2011 with the garage, which served as a dry storage space for the on-site contractors, as well as providing solar-powered electricity for the balance of the construction period via the photovoltaic (PV) panels on the roof.

The home’s main/upper level has a master suite and everything the Turners need to operate on a daily basis: kitchen, laundry, master suite, living and dining rooms. There are three steps into the house through a front or garage entry, but there is also a ramp leading from the garage to the side-entry door. Right now, the lower level of the house has two guest bedrooms along with a small kitchen, living room, laundry room and full bathroom.

The buildings on the property include the house (at left) and a detached, carriage-style garage (above) with sixty photovoltaic solar panels.

Laura, who is also a kitchen designer, handled the interior design of the house, keeping an eye on accessibility as well as aesthetics and energy efficiency. Some windows come closer to the floor than might be the norm, so a person in a wheelchair can see out. The shower is designed for wheelchair access. The floors are porcelain tile throughout (to accommodate wheelchairs and the radiant heating, and also for easier care and cleaning); in some rooms, the tile mimics the look of hardwood. Sylvain Dorais, owner of Custom Tile, llc in Bedford, did the installation.

In terms of decor, Laura says she went for a neutral palette, using “little pops of color” with pillows and area rugs. One of the loveliest parts of the house is a many-windowed three-season room, which is separated from the dining area by an eight-by-twelve-foot glass sliding/folding door assembly by NanaWall. This “wall” is left open for the three warmest seasons and closed for the winter to conserve heat, except for a couple of weeks during the Christmas season. All exterior doors are Marvin Ultimate Clad French doors, which provide a visual connection to the outdoors. One of the major contributors to the project was neighbor and master craftsman Jeff Thurston of Thurston Millworks in Concord, who built the large timber trusses used in several exposed ceiling areas. 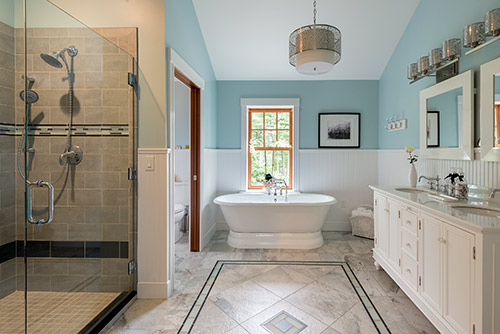 The master bathroom includes a wheelchair-accessible shower, at left.

As a cabinet designer for the Turner Group (her company is C3 Supply, LLC), Laura put a lot of thought into the kitchen. There is a T-shaped island with six chairs where visitors can hang out while the hosts are cooking. “It is so much fun to have people over for drinks and appetizers there,” Laura says. In the kitchen, the island cabinets are antique white; elsewhere, they are stained dark cherry.

According to the ROSE Cottage website: “The Concord climate, with its very cold winters and hot, sometimes very humid summers, required a mix of active and passive strategies to achieve cost-effective interior air conditioning. The structure utilizes the cool western breezes that flow through open power lines and over water during the summer. The lower level is naturally cooled with its earth berm on three sides.”

Heating and cooling are provided by two Bosch 2-ton ground-source heat pumps connected to a horizontal ground loop system. Hot water is generated by a nine-panel Bosch/Buderus Logasol SKS 4.0 flat plate collector solar system that stores energy. One hundred percent of the electric power consumed in the house is generated by a PV system. During the winter, all the power generated on a monthly basis is utilized on-site. During the other seasons, excess power from the PV system is fed daily to the local electric-utility company grid. Once a year, at the end of the first quarter, the net excess energy is calculated and can either be paid out to the Turners or banked for later consumption. According to Harold, he and Laura pay nothing for electricity and heat except for a small monthly fee for connecting to the grid. He is proud of the fact that the house doesn’t rely on the grid—there is even a battery backup for when the grid goes down.

Craig Lazinsky, of Bosch Thermotechnology Corp. in Londonderry, which supplied the heat pumps and other solar hot-water equipment for the project, notes that today’s homeowners are more aware of the need for energy efficiency. “There’s a strong push because homeowners are beginning to realize the money they put into high-efficiency equipment [geothermal wells, etc.] will save them money in the long term,” Lazinsky says.

Harold is quick to point out that he and Laura don’t live in a radically different way. Their house isn’t that different from non-net-zero houses in terms of daily operation. He even describes himself as fairly “conservative” in outlook. Energy conservation has the potential to become mainstream. “Once you figure out that you can do something that is both economically feasible and sustainable, it’s pretty conservative,” he says.

That is the secret to the net-zero houses of the future, he says. Builders need to be able to offer these energy-efficient models, and people will start to want them. For this to happen, he says, “Government mandates don’t work. It has to happen over time. Builders will start to say, ‘OK, this is what the market wants. How do I do it?’”

In the meantime, Harold says, “There’s no question that we’ve built something ahead of the current housing market, but that is already changing quickly with some major builders across the country offering net-zero or net-zero-ready models.”