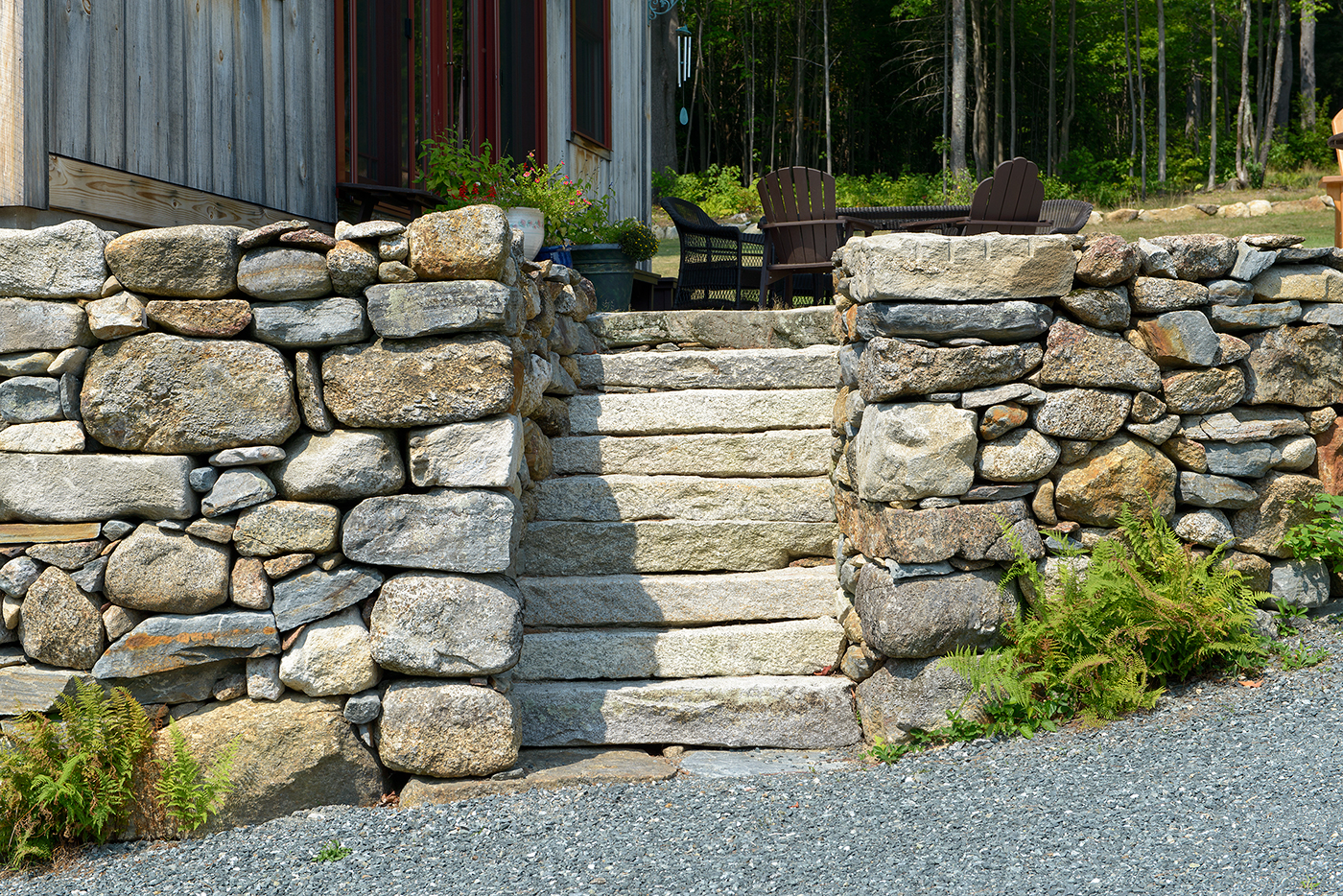 This new timber frame barn in Bradford had an old foundation. Finishing touches include a new retaining wall, patio and steps, all built on a solid stone base. This project was aided by an abundance of local stone.

Before Kevin Gardner begins his lecture on building stone walls in New England at the Madbury Public Library, he lugs in two plastic buckets of small rocks, plunks them by the long table that serves as his lectern and spreads a green towel on top of the table. The crowd piles into the room right on time. Nearby, homemade pies grace a side table, refreshments for after the lecture.

Gardner—author of The Granite Kiss, one of the select, definitive books about building stone walls in New England—has spoken at historical societies, town libraries, Canterbury Shaker Village, Old Sturbridge Village and Boston’s Arnold Arboretum, to name a few. He’s part of the New Hampshire Humanities’ award-winning Humanities to Go program, presenting lectures like the one in Madbury to community groups throughout the state, and also an actor, director and teacher of theater. When he spots the pies, he smiles and says, “Now, that’s cruel.”

Having captured everyone’s attention, Gardner very judiciously places one rock on the green towel and then another to lay the first course of the miniature wall he’ll eventually build.

The rocks themselves seem unremarkable at first. This assortment all fit comfortably in Gardner’s hand. Some are gray, or mottled, or flecked with mica, or maybe ringed with a white stripe. Nothing special, just the kind of odd rocks you might find walking down a dirt road anywhere in New Hampshire.

“All rocks want to go to the center of the earth,” Gardner says as he carefully places yet another stone. “This is something to work with.”

Strangely, he notes that New England’s thousands of miles of stone walls actually compare with the construction of Egypt’s pyramids. Quoting author Susan Allport, he says, “It would have taken … 15,000 men [working 365 days a year] close to 250 years to build the more than 250,000 miles of walls in New England and New York.”

Gardner scrutinizes his tabletop construction—even a miniature stone wall sometimes requires a meditative pause. He finds a stone that seems to fit a spot and continues: “The entire nation of Great Britain contains only about 70,000 miles of stone walls. And Allport’s figures refer only to walls—they do not include foundations, ramps, stairways, wells or bridges.”

How we got here

Gardner outlines the great fall of the virgin forest and construction of stump and split-rail fences. Hopeful, determined settlers heaped up those wooden fences with glacial rubble, the stones they continually tilled up in their fields. In the late eighteenth century, when the wooden fences rotted, stone wall building began in earnest: first in earlier settlements like Exeter, and decades later, inland. Farmers used the accumulating rubble to build the single stack walls that we still see delineating the contours of the land, along with boundaries and old homesteads.

From 1810 to 1835, the Merino sheep industry was booming in New England and life was good. But by 1840, the sheep had nibbled fields right down to granite in places, and soon many farmers moved west to greener pastures. By the late 1860s, stone walls sported metal stakes laced with barbed wire to fence in diary cattle. But even that innovation couldn’t keep farmers in New England. 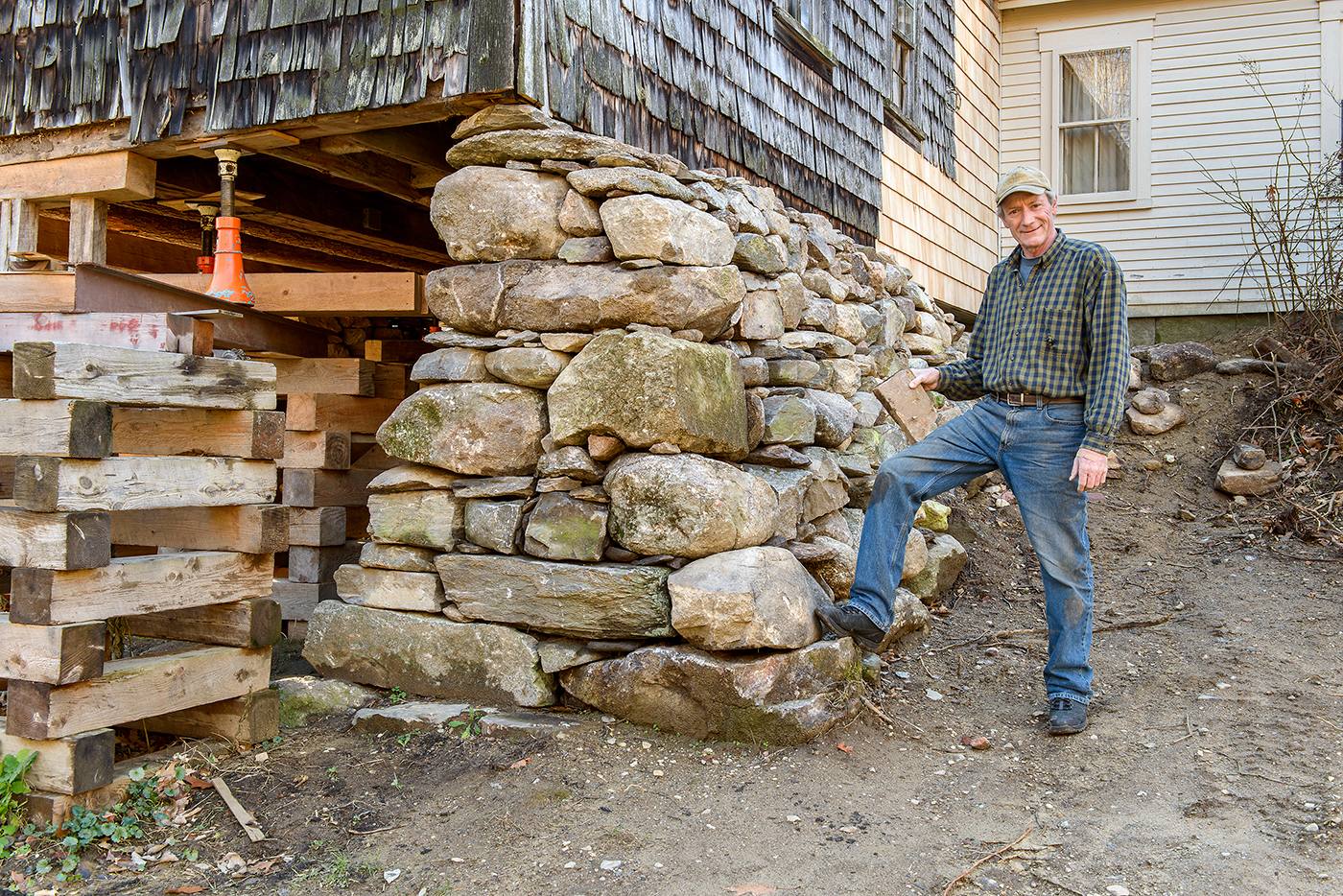 This battered foundation wall is bigger at the base and forms a classic right triangle (top). It’s an exceptionally strong wall and easily supports the old ell (bottom, before the foundation was rebuilt). Working alone for the most part, Kevin Gardner uses a small loader with a fork to place the larger stones. Then, using iron bars, he tightens up their placements. 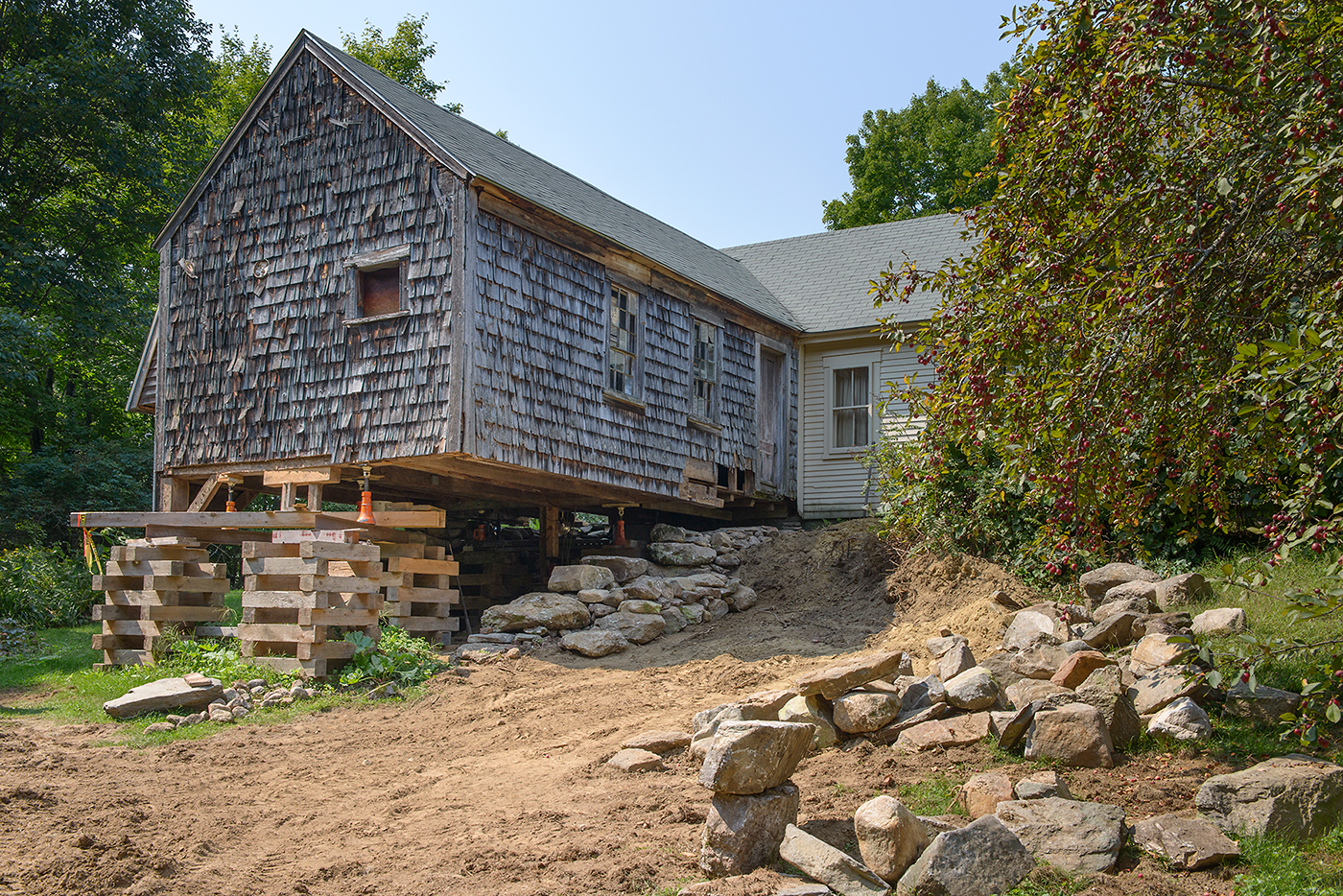 Yet, stone walls would soon experience a kind of renaissance in the nineteenth century with the birth of nostalgia for “Ye Olde New England” and all its virtues.

“Ever notice how presidential candidates like to pose in front of stone walls?” Gardner observes with a smile. “Even car dealers try to associate their products with stone walls.

“Have you had enough?” he asks the audience. Before him on the green towel is a lovely double-faced stone wall that is very much like the one he’s leaning against in the photo above.

Gardner recalls working on that wall in 1988. “It’s on Route 202 near Concord. It does look good doesn’t it?” he says. “That was a project the entire family crew worked on. It’s a classic double wall. There’s no distinction between the inside and the outside. The two faces are interwoven together, and there are big stones throughout the wall. This kind of wall is very stable. It’s a good example of the old style of building.”

When Gardner refers to “the family crew,” at that time it included his sister-in-law Stephanie and uncle Derek Owen. Gardner learned about working with stone from his uncle, who often “signed” his walls by including a crossed T as part of the stone pattern.

It seems that Owen Associates, the family business in Hopkinton, which specializes in dry stone walls, has coined numerous terms to describe their work: a “problem solver” is often an elongated, triangular stone; a “cheap seducer” is a stone that looks like it should work but doesn’t. And it was Gardner’s brother, Chris, who came up with “the granite kiss”: “That instantly discouraging, and inevitable, experience in stonework when a finger or two fails to escape the contact point between two large stones on the occasion of their first meeting.”

Especially useful to a fuller under-standing of stonework are the many Zen koan-like statements that Gardner shares to provide guidance to would-be stone-wall builders. Of course there’s the oft-repeated, “One over two, two over one.” But then there’s also, “Pick the stone for the spot, not the spot for the stone”; “Try to train yourself to remember more than one available space”; “Move on if your work area temporarily defeats you”; “Aim for steadiness rather than speed”; and “Avoid needless force.”

All worth repeating, when a beginner tries to repair a stone wall on his/her own. Yet for Gardner, perhaps the most elusive sensibility is that old-fashioned “willingness to take the time to do any given thing … to find that infinite patience.”

Repairing stone walls was once an annual chore as immortalized in Robert Frost’s poem, “Mending Wall.” Stone walls actually are fairly fragile, especially single-stack walls. Gardner notes that even the heavy vibration of highway traffic can cause stones to topple off their perches. And, then there’s the occasional earthquake, which fluffs the land like a big tablecloth, scattering stones like so many crumbs. So Gardner encourages those who are inclined to go ahead and pick up a stone or two.

These days Gardner works mostly on his own and not full time. He takes on work that appeals to him, and has participated in major restoration projects at Canterbury Shaker Village, Acadia National Park and many other historic sites throughout New England. He enjoys “communing with history … I like to say I’m looking for anonymity when I build,” he says. “When someone drives by, they might think it was done two hundred years ago.”

See how stone walls are built

For more information about these and other New Hampshire Humanities programs, visit www.nhhumanities.org/event-calendar.