A net-zero home builds on old traditions with new technologies for future generations.

These galvanized metal roofs each reflect the sky in a slightly different way. The nine-kilowatt solar array on the barn roof blends in beautifully while providing ample electricity for the new home just up the hill.

Today, just as in the 1850s, southern light warms this hillside farm in the White Mountains. Old stone walls and apple trees define pastures and fields once used for sheep and seed corn. The richest soil in these parts is found along the rivers, but no aspect better typifies the hope and determination of that time than this gentle slope with its small, sturdy farmhouse that incorporates refined Georgian details. The English barn and attached carriage house—now renovated to be a cottage—are still sited where they were built, a few steps away from the main house.

Behind these older buildings, a new home has been built. It sports a new, snazzy, galvanized, standing-seam metal roof— as does the old farmhouse. Altogether, these buildings have the hip look of being old and new all at the same time. It’s kind of like a family photograph where the old folks and the youngsters all have a bit of something cool. Instead of a baseball cap, Doc Martins or a bow tie, it’s a solar array on the roof, a touch of red and white on the trim and doorways, or those can’t-be-beat classic details.

True, no one’s raising sheep or growing seed corn on this property today. But the apple trees are chugging along, and this family compound with its new, net-zero home on the hill is still cutting edge. 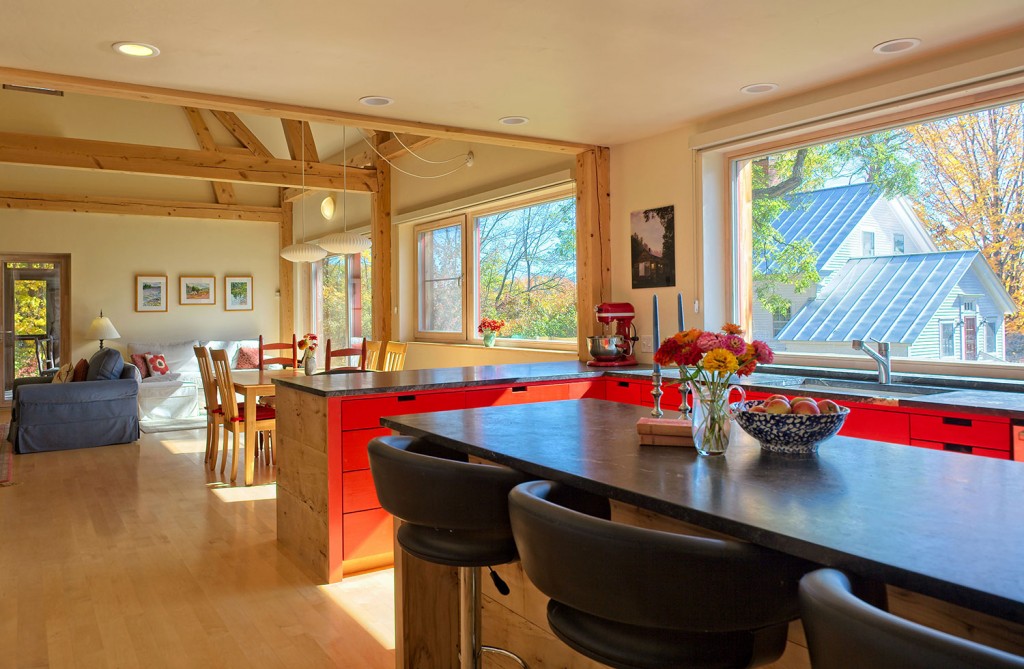 Light is vital for this new, net-zero home, designed and built by Ben Southworth of Garland Mill Timberframes in Lancaster. The home’s siting provides day lighting and passive heat solar gain. Notably, the old homestead was sited with similar intent.

Take the three siblings, add their families, plan on grandchildren and, for this generation, a new house onsite made sense. “We opted to build a net-zero home because it would be sustainable and last for a very long time,” the homeowner says. “We chose Garland Mill [Timberframes] to design and build the house because of their philosophy. They understand places like this. And, Garland Mill owner Ben Southworth is great to work with.”

Garland Mill, a family-owned design/build firm based in Lancaster, has been in operation since 1856. The Southworth family has owned and run the water-powered mill since 1974. Today, cousins Ben and Dana Southworth are the third set of multi-generational family owners and operators to run the mill. For the past twenty-five years, Ben and Dana have designed and built homes and other buildings; most are timber frames. The cousins specialize in designing and building high-performance homes, using local wood; lots of insulation; triple-paned glass and mechanical ventilation with heat recovery; salvage materials whenever possible; and healthy products, such as paints with low volatile organic compounds. For Garland Mill’s net-zero homes, the goals are to dramatically reduce the heat and hot water loads, and then generate enough energy onsite using photovoltaic (PV) panels.

“We take the design process seriously,” Ben says. “It takes a while to get to know homeowners, their goals and dreams. It also takes time to understand the site, which is critical for solar power, and to take advantage of the sun for lighting and passive solar heat gain. We provide the strategy for achieving clients’ goals and the net-zero energy standard.”

As Ben puts it, “We like to come back to visit and kick the tires.”

The engineering of a net-zero house 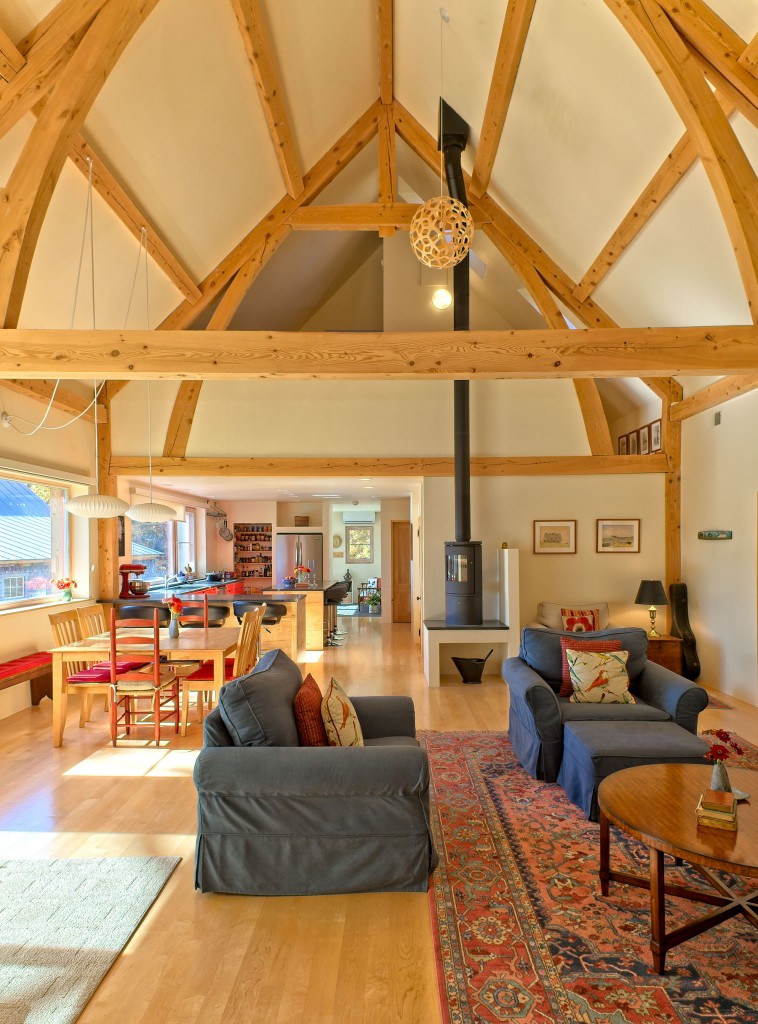 The home’s great room is timber-framed, incorporating hemlock beams and rock maple flooring, both local woods. The hemlock naturally appears whitewashed. The curves of the sling brace trusses were cut to resemble Gothic arches, which softens the overall look.

This net-zero house fits in with the New England vernacular of outbuildings. But a net-zero house does not dictate a certain style; instead, it’s the insulating envelope and solar generation that distinguishes net-zero homes from code-built homes. And like all houses, these features start with the foundation.

“There’s a giant boulder under this home so there’s no basement, just a crawl space,” Ben says. “If someone needs to go down there, we’ve supplied a padded creeper.”

To begin, the foundation hole was dug, and footings and frostwalls were poured around the perimeter of the foundation. Inside the frostwalls, between six and eight inches of crushed stone were added, along with a diagonal length of perforated pipe to mitigate radon. On top of the crushed stone and radon mitigation piping, six inches of recycled foam was added and topped off with a thin polyethylene vapor barrier. The slab was then poured over the polyethylene.

Tape was used to create a sealed, insulated envelope throughout the house. This ensures that doors and windows are sealed to the framing, and all other possible air leaks are sealed. The roof is insulated with eighteen inches of blown fiberglass, and the walls are thirteen inches thick. Two cold-climate heat pumps provide the heat for the house.

“This was one of the first houses we tried those heat pumps on, and now, that’s all we use,” Ben says. “The key to net-zero is to reduce heat loss from the building. We superinsulate the building and make it airtight. We use triple-pane, wood windows that have aluminum cladding on the exterior. You have to be really passionate about efficiency to build net-zero home.”

Early in design, Ben engaged some engineering friends to think through the building process. “For this project I hired Marc Rosenbaum [of South Mountain Company in West Tisbury, Massachusetts] to help me think through the cold-climate heat pumps. David White [of Right Environments in Brooklyn, New York] helped me analyze the thermal bridging,” Ben says. 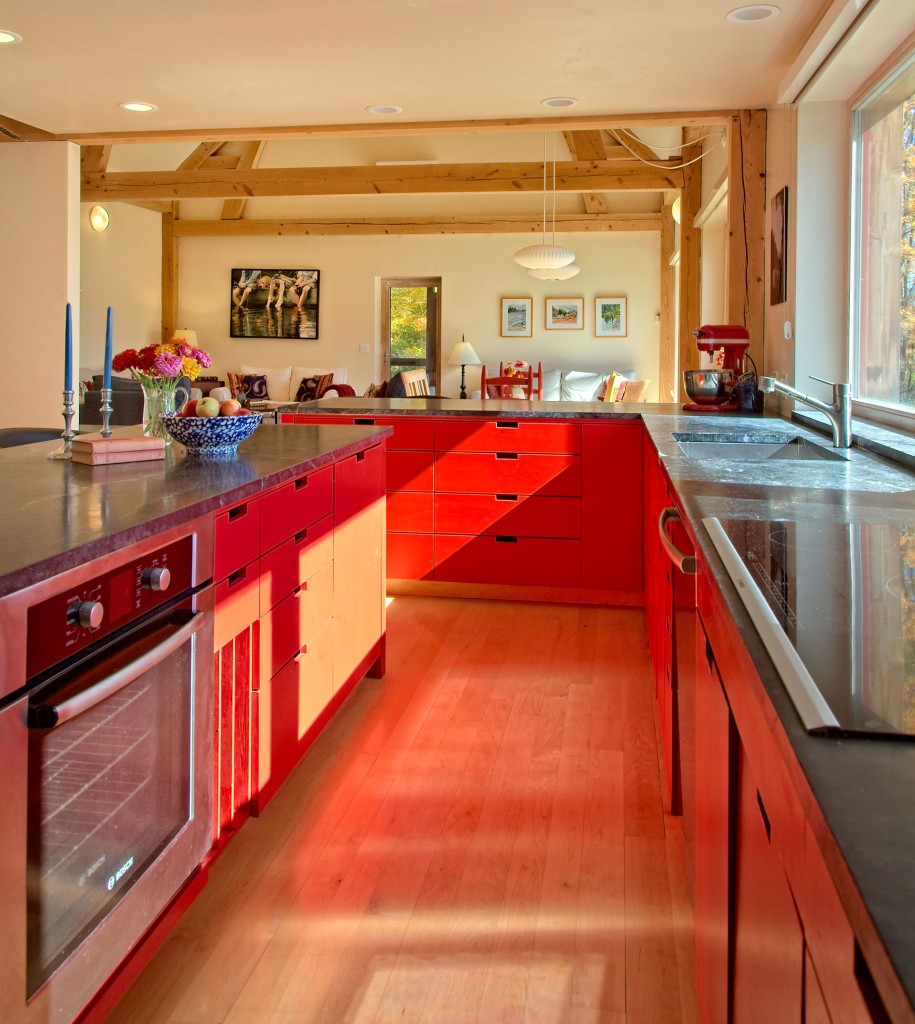 With bold statement colors and simple open spaces, small touches—a bowl of fruit, a bouquet of zinnias and a pair of blue candles—really stand out.

“We did two-dimensional heat-flow models to identify any cold spots that might be prone to condensation,” White says. “If we found any deficiencies, we went back to the drawing board.”

All the electricity is provided by a nine-kilowatt array of solar panels on the nearby barn roof. In the summer, the solar panels produce more than enough electricity, and the overflow goes back into the grid—using the grid as a storage medium. The utility keeps track of how much energy has been “banked” in the summer months and allows the house to draw that banked electricity in the winter. The energy tracking process is called net metering, hence the term net-zero.

“By adding electricity to the grid, a net-zero building makes the grid more resilient and lowers the cost of energy for everyone,” Ben says.

He says with electric cars becoming more common, the excess solar generation will be stored in car batteries, and cars will provide backup energy to buildings. “This synergy will make for a more resilient grid and eliminate the need for fossil-fuel peaker plants that are very expensive, inefficient and dirty,” Ben says.

“It’s a whole lot easier to build a new net-zero home than it is to retrofit an older home,” Ben says. He predicts that since many buildings are too difficult to fix, they’ll simply start coming down. But, he says, for the right old home, a deep energy retrofit can breathe another hundred years into a building.

Creating a sustainable home extends to concepts that save energy in other ways, such as making use of local woods and salvaged materials. The floors are rock maple, and the timberframe beams are hemlock. The cabinet surrounds are made from a sugar maple found on the property. Salvaged four-panel doors and associated hardware are used throughout the home. In a subliminal way, those materials connect the home to the old farmhouse.

Universal access is a design priority for Garland Mill and a big benefit for the multigenerational family who occupies this net-zero home. Accessible homes include step-less entries, a downstairs bedroom with an accessible bathroom and thirty-six-inch-wide doorways. These features can provide access for small children, older people, a teenager with a broken leg or a middle-aged person after hip surgery. 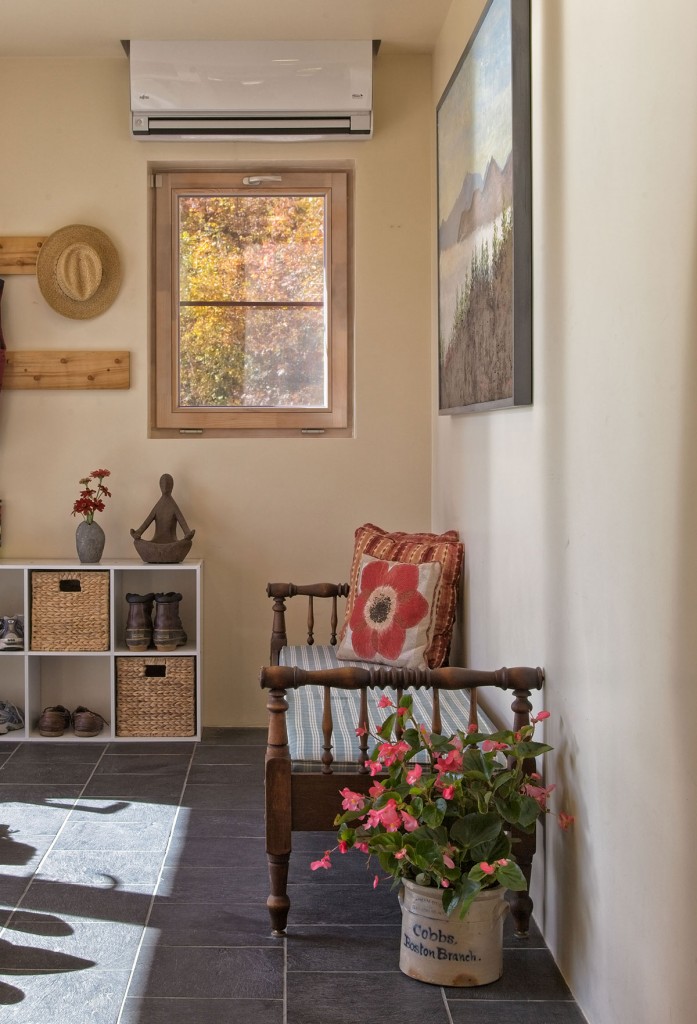 The tiled entryway, with a bench for taking off shoes, stays neat thanks to conveniently placed cubbies.

Open drawer pulls in the kitchen are another subtle, universal-access touch. “The open handholds are so easy to use,” Ben says. “And, they do have that cool, mid-century modern look.”

A screened-in porch is, of course, a necessity in northern New England, along with the backup heat a wood stove can provide. Here, a highly efficient Mørso wood stove gets its fresh-air intake from a steel pipe that connects directly to the stove and runs under the house to the outside.

In winter, when the house isn’t used as much, the efficiency setting for the heat pumps is 50 degrees and the hot-water tank is turned off. The house reliably stays above freezing.

The modern, unfussy décor is the homeowners’ choice. Many of the paintings are by an artist in the family. A bookcase library has something for everyone, especially children whose books are on the lower shelves. Cozy couches and oversized chairs are perfect for reading to the kids.

The brilliant red in the kitchen and dark soapstone counters make a bold, warm statement. In the great room, soft plums, reds and blues predominate. The large pendant lights are by New Zealand designer David Trubridge and, of course, the lights are LEDs.

The look is fresh: layering old and new seamlessly. It’s just right for this net-zero home that synthesizes both concepts throughout.