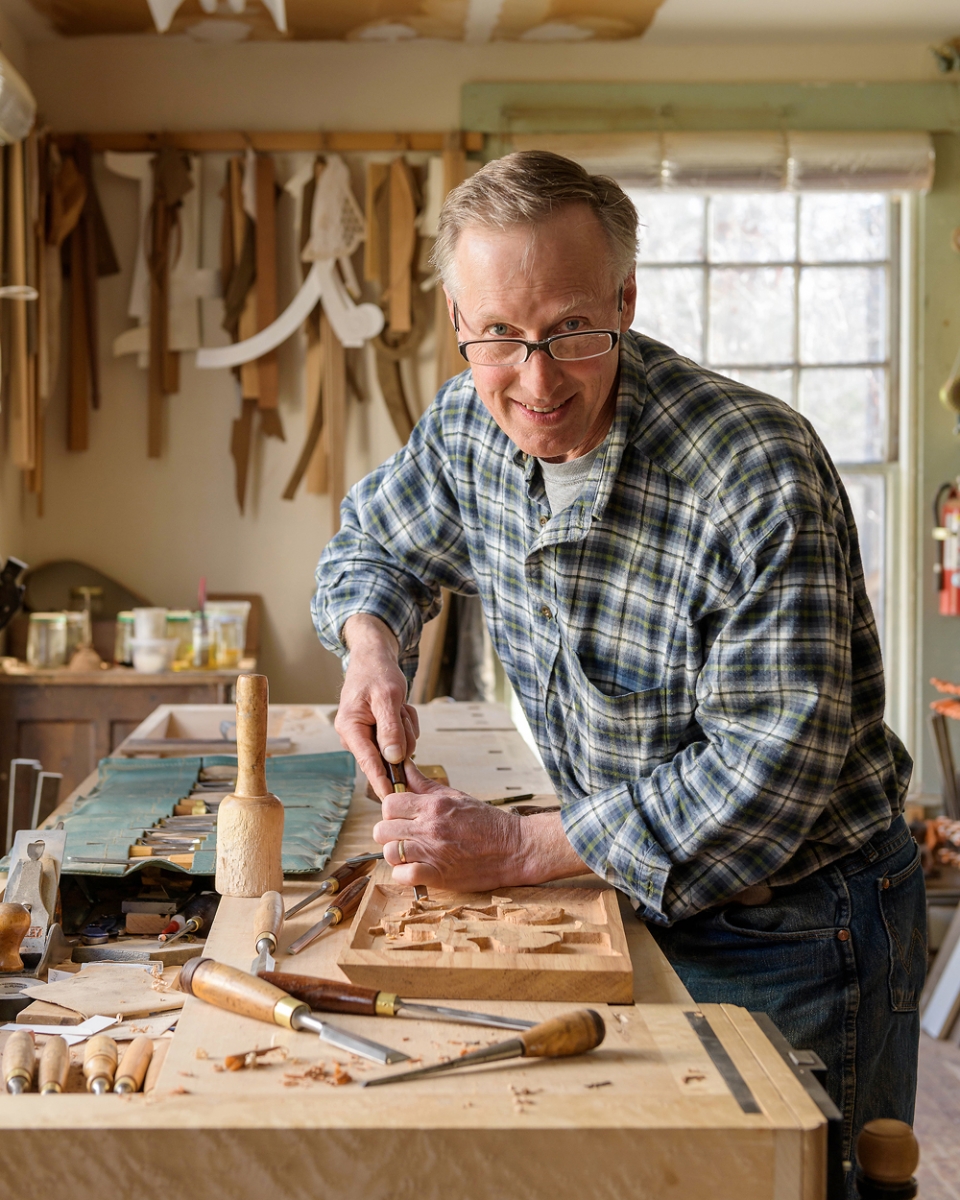 In his Canterbury shop, David Lamb works on a sample carving for the frieze. “This is a preliminary study before committing to the actual panel,” he says. “The level of detail is what I planned to do for all the panels.”

When it comes to making fine furniture, David Lamb has extraordinary talents. He discovered his passion at age fifteen and became an apprentice of master cabinetmaker Alejandro de la Cruz, who lived and worked down the road from Canterbury Shaker Village where Lamb grew up. Since 1986, Lamb has lived and worked at that very same home and shop, and in the intervening years, has made pieces for celebrities (including Harrison Ford and Ivan Lendl) as well as many private collectors. Lamb’s work has been commissioned by clients nationwide; one homeowner, a client since 1994, has nearly thirty of his pieces.

In 1992, Lamb became a founding member of the New Hampshire Furniture Masters, and from 2010 to 2014, he was New Hampshire’s fifth artist laureate. He is inspired by eighteenth- and nineteenth-century furniture design; he’s also known for the exquisite craftsmanship of his pieces, which include secretaries, tables, breakfronts, chairs, highboys, desks and sofas. Lamb works with a variety of woods, including mahogany, maple and cherry, and many of his pieces feature intricate carvings of leaves, vines and flowers.

In 2011, Lamb was commissioned by Colin and Paula Cabot to carve a frieze for the timber-frame addition to their 1875 farmhouse at Sanborn Mills Farm in Loudon; Lamb began the project in 2013. The addition was built for meetings at the farm, which, until the Cabots’ purchase, had been owned by the original family since the 1770s.

For their commission to Lamb, the couple—who built a classically inspired opera house in Milwaukee before moving to New Hampshire in 1997— wanted to include a classical allegory at Sanborn Mills Farm: a nonprofit dedicated to reviving and sustaining traditional crafts, such as blacksmithing, timber framing and using draft animals (such as horses and oxen) on a working farm.

“We first saw David’s work at a New Hampshire Furniture Masters’ Auction shortly after we moved here,” Colin says. “His work stood out, and we felt a carved frieze was more appropriate to our farm than a piece of his furniture.”

And so began Lamb’s commission to create a frieze telling the story about the Triumph of Craft—“because that it what his work is,” Colin says. “Our farm also celebrates the triumph of craft, with our skilled workers in the woodshop, forge and garden who strive to use materials off the land for everything they do.”

New Hampshire Home [NHH]: How did this commission unfold?

On both sides, the story begins in the wilderness. On the south side, the viewer is looking at the forest floor and the subject matter is more intimate, with details such as individual flowers, mice, a salamander and fungi on a stump. On the north side are mountains and forest.

NHH: What was your inspiration for representing the stories?

DL: The nineteenth-century engravings of White Mountain artists and their romantic views of the mountains guided my approach. I had to have a broad landscape for each panel, which are each about ten inches tall and six feet long. I was piecing together elements to create the story, which Colin and Paula gave me carte blanche to interpret.

NHH: What was the first step?

DL: I began by composing sketches that were two inches or three inches high and a foot long, which is how I work when I’m designing furniture. I really like the scale of things when working small. Once we figured out what would be represented on each panel, I used a photocopier to enlarge the drawings to full size and taped them to the space to see how they’d look once they were in position.

NHH: What material did you use for the frieze?

DL: Paula and Colin wanted me to use pine from the farm, but I needed thoroughly dry wood. So I found some dry, local pine that had no knots—for which one pays a premium. Softwood is easy to carve and it holds detail, but one needs to use exceptionally sharp tools. The challenge is not to tear or collapse the somewhat delicate wood as you’re carving. 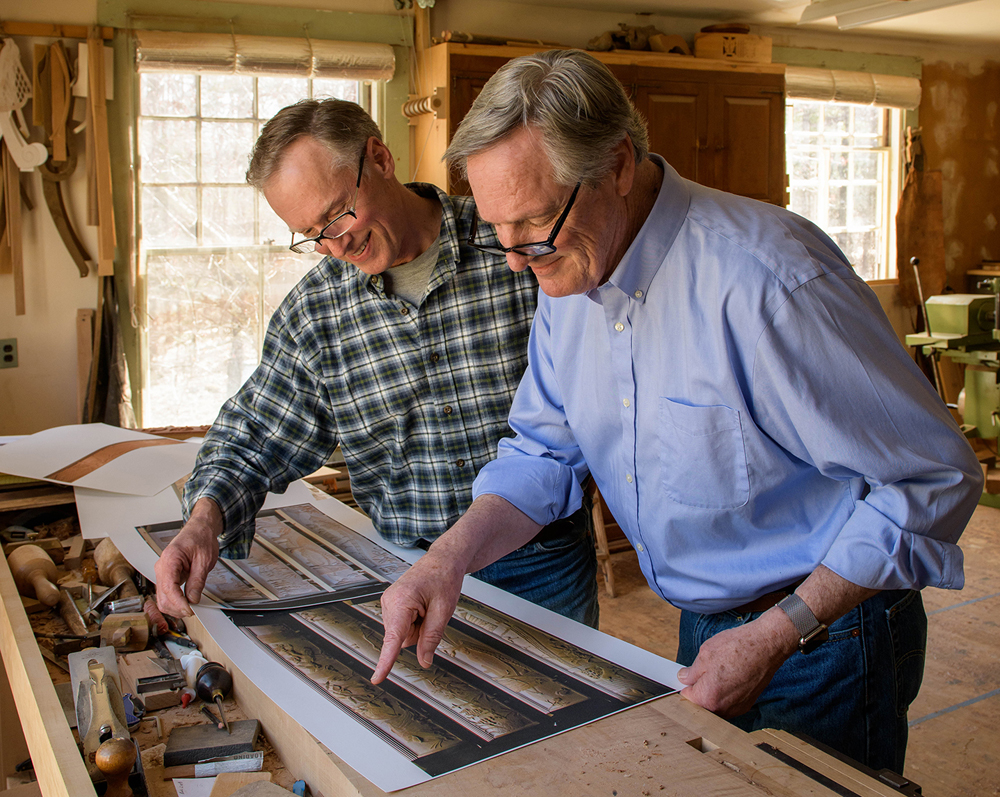 NHH: How was this project different from others?

DL: It’s not often I have a project that’s just carving—usually carving is a component of a piece, like a table I was commissioned to do after the frieze. My first piece of architectural carving, made around 1980, was a mantel piece that had Corinthian columns with acanthus leaves on the capitals. This was a huge step for me as a craftsman.

NHH: How is carving different from other ways of working with wood?

DL: It certainly is a different skill. Thankfully, my training has been diverse and through my apprenticeship with Mr. de la Cruz and my formal schooling at Boston University’s Program in Artisanry, I learned to understand the value of having many skills. That means being able to offer more to my clients and having new avenues of artistic expression. It is a rare breed of furniture maker who also carves. Carving is pure art, as there is no technical necessity for it.

NHH: Do you prefer carving to working on machines to make furniture?

DL: I like carving very much. Carving is very relaxing and deliberate, but you can’t make mistakes and cover them up. Carving can also be very contemplative. For example, when I’m doing machine work, I’ll play rock and roll music. When I’m carving, I like a quieter environment—I’ll play classical music or no music at all. I like going out to our gardens with a sketch book to draw an iris, a crabapple blossom or a morning glory. Later, they might appear in my work.

NHH: How about the human figures and animals in this frieze—what inspired them?

DL: I usually don’t do people or animals in my work, so for this project, I looked at books of old engravings to find a horse drawing a carriage or a turkey fanning its tail. One of the panels shows maple sugaring, and I found a photo of a Canterbury Shaker sugar house from the late 1800s that I used as a model. I created a scene with a workhorse pulling a sled with a big gathering tank for sap in it.

NHH: What was your favorite panel to carve?

DL: The first panel I drew is the one showing the approach to the farm. The road is so magical, the way it comes out of a forest and then into the farm. My panel shows the sheep grazing in the foreground, and you can see the cupola of the barn in the distance. There’s a dog in the field keeping an eye on things. I wanted to create the sense that the viewer is approaching something special.

Another panel shows another dog—Toby, the Cabots’ chocolate Labrador retriever—on the front porch looking at a pie on a windowsill. I had fun with that one. That panel has a woman working in a garden, and a wagon from Sanborn Mills Farm going to town with flour and pies. I also love the panels that show the water-powered gristmill and sawmill.

NHH: The panels seem to have a lot of depth. How did you achieve that?

DL: It’s tricky, because I can only carve to a maximum depth of half an inch with the material we chose, while at the same time illustrating three perspectives—up close, mid-range and in the distance. To add depth and tone to the panels with a process similar to bleaching, I brought Mark Adams into the project. He is a furniture conservator and architectural finisher, and his work helped the frieze a great deal. In fact, Mark has partnered with me many times over the years. He helped with design and finish work on Harrison Ford’s and Ivan Lendl’s projects.

Mark was working on a big restoration at the Park Avenue Armory in New York City when I was doing the Cabots’ frieze, so we had to wait a year for him to add his magic touch. In his studio, he re-created the same light conditions that are at the farm, so he could take the panels there to work. His goal was to make the panels look like there was little or no added color or effects on them, which he was very successful in doing.

David Lamb’s concept sketch shows what he planned to carve. His carvings are, at most, a half-inch deep.

This panel is based on the drawing above. On the left, Toby, the Cabots’ chocolate Labrador retriever, eyes the pies cooling on the windowsill. Daylilies grow near the farmhouse porch, and the farm’s garden is shown in the background. On the right, a wagon takes finished goods to town.

This panel shows the area where wildlife and wild plants live. Note the hornets’ nest on the left; the bulrushes and wetland plants in the center; and the irises and elm tree on the right.

Lamb says, “I find the road leading to Sanborn Mills Farm magical.” Sheep graze in the pasture on the left while cows do the same on the right. The barn with the cupola is in the distance.

David Lamb says he took artistic “liberties with the seasons by showing early spring and summer” in this panel. On the left, sap buckets hang from maple trees and oxen pull a sap tank. On the right, oxen pull a wagon loaded with hay.

Lamb shows the transition from the rugged mountains and wilderness of northern New Hampshire to the rolling landscape of the central part of the state, where Sanborn Mills Farm is. Elm trees surround the water to the left, while fir trees grow at the base of the mountains.

This panel gives a close-up view of the wilderness. On the root of the tree stump to the left is a newt, who is being observed by a mouse on a nearby log. Wild plants include jack-in-the-pulpit, fiddlehead ferns and trillium.

Mark your calendar for September 22, when you can meet David Lamb and other New Hampshire Furniture Masters at the group’s

annual fundraiser: The Master’s Piece. The evening features a silent auction of the masters’ work along with a dance performance, live music, artisanal foods, craft beer, a signature cocktail and more.

Tickets are $75 in advance and $90 at the door, and may be ordered online at furnituremasters.org.