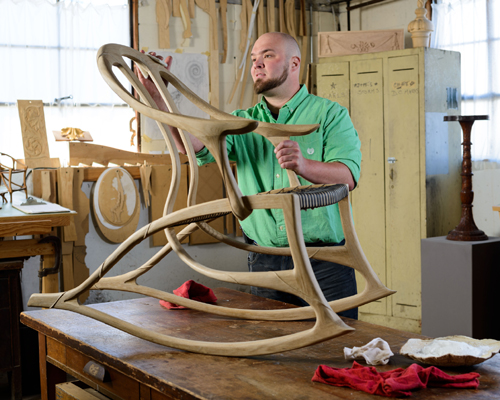 Greg Brown’s Alden Rocker is named for his grandfather, Alden Hobart, whose fishing net inspired the chair’s design. Brown used spear fishing line made from braided Kevlar for the seat and steamed white oak for the chair. The chair can be seen from September 10 to 25 at the New Hampshire Furniture Masters 2016: Distinctive Exhibit, held at 3S Artspace in Portsmouth

Greg Brown didn’t have to wait long to find his dream job after he graduated from the North Bennet Street School. (The Boston, Massachusetts, school offers intensive training in traditional trades, such as furniture making.) In fact, Brown has been so busy since the minute he completed training there in February 2010 that he’s been working nonstop ever since. Besides doing projects for luminaries—one of whom is a famous musician, another is a prominent government official—three of Brown’s pieces have been recognized by the California-based Design Journal: his Alden Rocker was named one of the “Best of 2015 Products,” a platinum award; in 2016, his Devil’s Embrace tilt-top table received a platinum award for design excellence while his Lindsay Maple Table won a gold award.

Brown says that woodworking “found” him two years before he enrolled at the North Bennet Street School—and those of us who love fine furniture are glad it did. This exceptional thirty-three-year-old artist shares his remarkable story:

New Hampshire Home [NHH]: How did you realize your passion for fine-furniture making?

Greg Brown [GB]: In 2006, two years before I enrolled in Bennet, I was looking for something to occupy my mind. I had graduated college with a bachelor’s degree in health science, with the intent to be a trainer since I was big into sports. But I had a change of heart and decided to take a part-time job as a carpenter. One of the guys on the crew, Lou Aubin, changed my life. He had a full woodshop at home and loved building boats. He’s the one who introduced me to carving. I made a half-hull model with him and was hooked. He gave me a key to his shop and told me to use it any time.

NHH: How did you get from there to the North Bennet Street School?

GB: I became obsessed with woodworking, and would buy old tools on eBay and refurbish them. At that time, I was living in Manchester, Connecticut, down the street from a woodworking school and became an assistant there so I could buy other tools at cost. I was able to drop in on classes for free, so I learned what I could at school and did the rest at Lou’s shop. For practice, I carved three dozen ball-and-claw feet! Soon I began working full-time at M.J. Martin Woodworking in East Hartford, Connecticut, where I made custom cabinetry and architectural woodwork, and did small carving projects. I also did carving demonstrations at the Connecticut Home Show. The muse had taken over!

NHH: Why did you choose the North Bennet Street School?

GB: I have always loved the embellishment, as well as the design, of fine furniture and wanted to refine my furniture-making skills. At Bennet, I learned how to build fine furniture, to make “twists” on eighteenth century reproduction pieces. I also found my niche in carving at Bennet and discovered there are not a lot of people doing that.

NHH: Where do you draw inspiration for your work?

GB: I have always loved the work of Gringling Gibbons, a seventeenth century English carver. He was inspired by nature and would carve these beautiful bouquets. 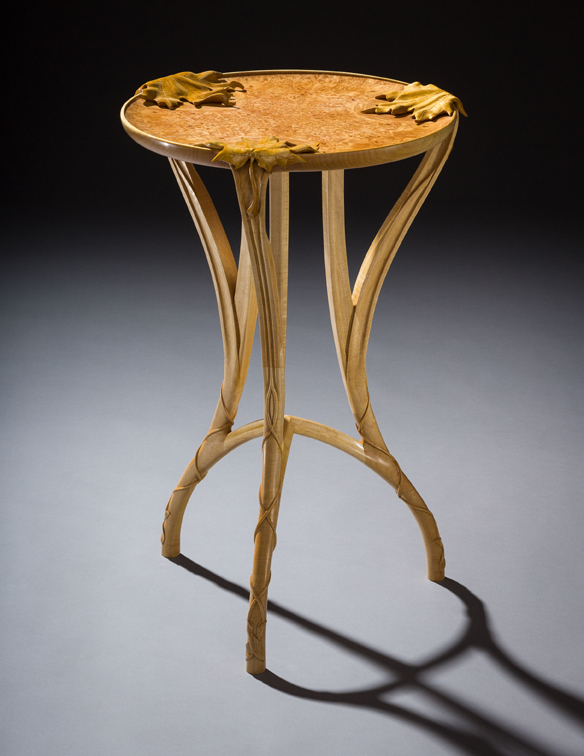 photography by bill truslow
Greg Brown’s Lindsay Maple table is made from sugar-maple and maple burl, and its design was inspired by the sugar maple forest near his shop. His carved leaves on the dished burl top evoke leaves floating on a rocky pool.

NHH: What brought you from Boston to New Hampshire?

GB: Bill Doub, who also went to Bennet, was a well-known furniture maker and carver living in New Hampshire at that time. Bill had heard about me from my teachers at Bennet, and in early 2010, Bill invited me to be part of a collective of nine woodworkers in Deerfield at the Lindsay Workshops, located in an old pneumatic factory. These guys had been working together since 2001 and were a diverse group. Everyone had their own machine space, and three of them were full-time furniture makers—Bill, Owain Harris and Jason Rivers. It’s a great arrangement, as everyone can use one another’s machines with permission and there’s a big open area for display.

At that same time, a high-end Realtor in Boston had seen one of my pieces in a gallery and asked me to meet him at his house on the Cape the next day. He wound up buying a table, and commissioned me to carve four urns and two mahogany corbels for his dining room, along with four gilded appliqués for the cornice in his foyer. I also carved two big pine corbels for his living room.

I was also asked to design and carve a mantel for a famous musician. A classmate at Bennet had recommended me to someone working for this person. Everything was coming together, and so quickly. It amazed me because I discovered carving in Connecticut—I didn’t even know I could draw before then.

NHH: It sounds like you’ve had some busy and exciting years!

GB: By the time I got to the shop in Deerfield, I had already worked in more than two dozen woodworking shops. I knew how hard it was to make a living. And I knew how hard it was to ask for help, until I met Richard Oedel at Bennet. I was his first summer intern in his shop in Boston. At that time, he was a new member of the New Hampshire Furniture Masters, and he introduced me to others in the group. So I reached out to them to see if they needed help. I had also been hired by Bill to deliver a furniture commission for his client in Montana, and while we were en route, I heard from someone who wanted to buy a carved sideboard I’d made at Bennet—a year later, that same client bought another piece I’d made at school. So my business was taking off.

NHH: Are you still involved with the New Hampshire Furniture Masters?

GB: I’ve been involved with the Furniture Masters for four years now, and it wasn’t until I was part of that group that my creative energy exploded. The Furniture Masters challenged me to build my own piece for their annual auction in 2012, and that’s how I made the Lindsay Maple Table that recently won an award. There’s a sugar-maple forest near my studio, and that’s where I got the inspiration for the table. I did a lot of experimentation with the design of this table and finally ended up making my own New England version of it. It’s a small, round table, a functional piece of sculpture as I see it.

Later that year, at the reception for the Furniture Masters at the New Hampshire Historical Society, this table sold. And jobs began flying through my door. Ever since that show, things have been going really strong.

Not only did the Furniture Masters help me find my artistic voice, they also helped me develop business skills, talk to prospective clients and describe my vision. The group has opened doors for furniture makers by helping them pool resources to create new works to share with the public throughout New Hampshire and beyond. There’s a wonderful camaraderie in the whole being greater than the sum of its parts.

One of the most impressive commissions I got through the Furniture Masters was building a bookcase for a prominent government official. I was so thrilled to work with such a VIP.

The greatest lesson I can share with young people is that you just have to pursue your passion and keep plugging away. There are people who will help you and guide you along the way. There’s more than just being in your shop alone, making furniture.

Where to Find Fabulous Furniture 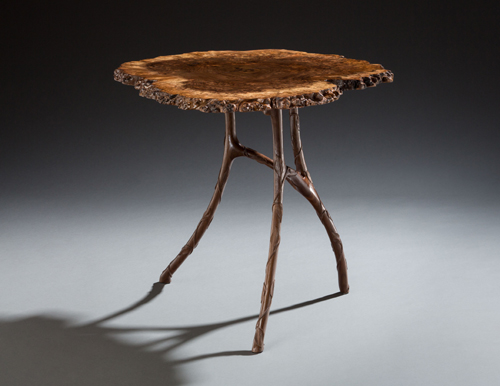 Greg Brown’s Devil’s Embrace was made for the New Hampshire Furniture Master’s 2014 Gala. The top of this black walnut table, which tilts, is made from a claro walnut burl that came from the Berkshires. Winding devil’s ivy climbs the legs.

You can see new work by Greg Brown, along with fourteen other furniture makers, at the New Hampshire Furniture Masters 2016: Distinctive Exhibit, which runs from September 10 to 25 at 3S Artspace in Portsmouth. The main event takes place Sunday, September 25, with an exposition and silent auction from 1 to 5 p.m., followed by a live auction at 5 p.m. and dinner with the Furniture Masters at 6 p.m. The exposition and silent and live auctions are free and open to the public; tickets for the dinner are $50 and available at www.furnituremasters.org.
3S Artspace
319 Vaughan Street in Portsmouth
www.furnituremasters.org