Celebrate the Holidays with Flowers

Florals accented with a little bling make this time of year especially festive. 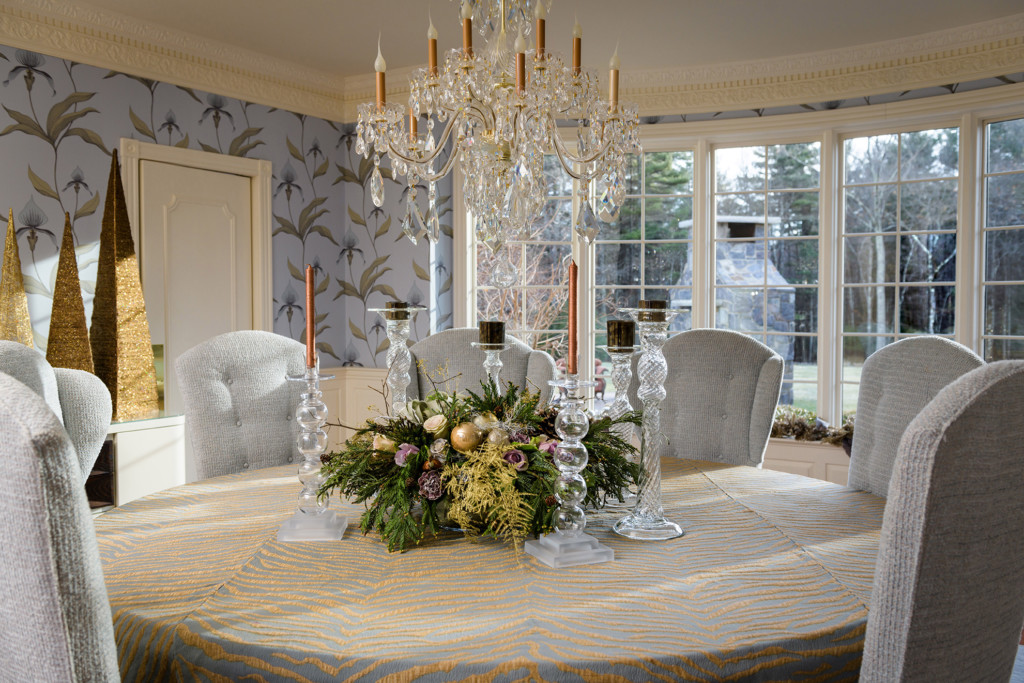 Diana Ginnard’s collection of crystal candlesticks is warmed by a low arrangement by Alyssa Van Guilder, of Apotheca Flowers in Goffstown. The arrangement is filled with redwood tips, cedar, festive ornaments, metallic plumosa fern and natural pinecones as well as fresh florals, including roses, lisianthus and carnations.

Diana Ginnard of Amherst enjoys spiffing up her home for the holidays. “I love the changes you can make to your décor just by putting up seasonal decorations,” she says. She and her husband, Mark, have hosted an annual Christmas party for years. “When the kids were little, we had a twelve-foot-tall tree and poinsettias all over the house,” she says. “But now, I want something different.”

For the past four years, Alyssa Van Guilder, of Apotheca Flowers in Goffstown, has been doing Diana’s floral decorations. “Alyssa is so creative and unique, an amazing talent,” Diana says. In fact, Diana likes Van Guilder’s work so much that Diana has Van Guilder create floral works of art for other celebrations and holidays, not just Christmas. “She may ask me about colors or a theme, but she knows my taste,” Diana says. “I tend toward muted colors, and she gets me!” Diana and Van Guilder have established a rapport that is often missing in business today. “Diana is one of our absolute favorite customers!” Van Guilder says. “She has mastered her own style voice in such a beautiful way, and we love being invited into her home to accentuate that style with our florals.”

Bringing in the decorations

In mid-December, Van Guilder brings her dedicated team of designers—Ricky Santiesteban and Matthew Radwan—and, using containers from Diana’s collection, they spend the day assembling. “I let her have free reign. I leave for the day so they can get their creative juices flowing without me there to bother them,” Diana says. “I look forward to seeing what they have done when I return home.” 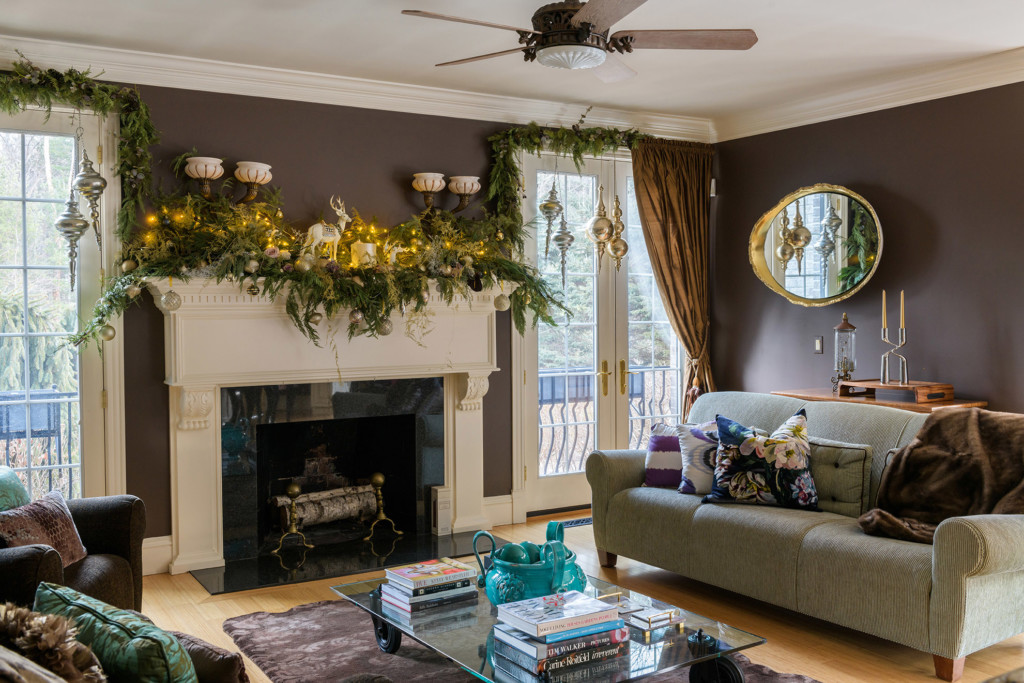 Since the fireplace is the focal point in this cozy living room, Alyssa Van Guilder and her design team at Apotheca Flowers in Goffstown created something a little over the top on the mantle using roses, a riot of evergreens and gorgeous ornaments, with a little holiday scene nestled in the middle. The Apotheca Flowers team decorated the two windows flanking the fireplace with garlands and oversized ornaments.

Last year, the team decorated five of the downstairs rooms in the Ginnards’ elegant, eight-thousand-square-foot, Tudor-style home. Dramatic centerpieces and tablescapes were needed to match the large scale of the rooms in which they were placed. Three of the seven fireplace mantels were adorned with seasonal greens embellished with lights, flowers and sparkling, lustrous decorations.

“We use 90 percent fresh and 10 percent bling for the holidays in Diana’s home,” Van Guilder says. “We also choose materials that will dry beautifully and not make too many messes. We obviously want everything to look fabulous throughout December for holiday gatherings and for her Christmas celebrations.”

Last year, Diana was impressed that the materials used on the mantels lasted for weeks and dried so well that she could leave them up long after the holidays were over.

“We source our flowers from all over the world,” Van Guilder says, “and work with wholesalers in Boston and Rhode Island as well as locally. Our favorite company to order Christmas ornaments and accents from is a wholesaler we adore called Roost.”

The elements of the design

The color palette used was largely based on Diana’s style. “She is approachable but deeply sophisticated while being a New Hampshire girl at heart.” Van Guilder says. “The touch of deep reds and unique purples in an array of natural textures all displayed in unique style-forward vessels showcases her style perfectly.”

Some of these colors are not what people think of as being Christmasy, and Diana is glad not to have red poinsettias everywhere. “We don’t need to be specifically red, green and white. The season is expressed through our foliage choices and that 10 percent of bling.” Van Guilder says. 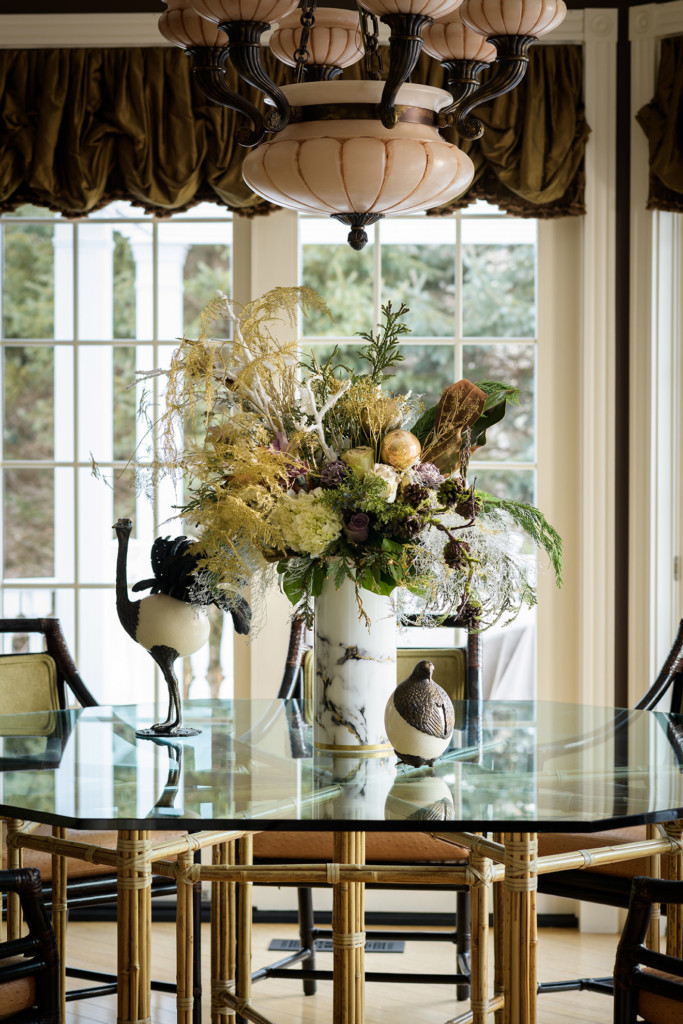 Texture abounds in these arrange-ments. Natural-looking cedar, cypress, pinecones, redwood tips, salal and magnolia leaves are accented with frosty, white flocked branches and dyed asparagus fern. “We have been loving all things dyed, sprayed and dipped,” Van Guilder says. These elements support the florals, which include amaryllis, black Baccara roses, muted lavender Amnesia roses, boutique carnations and orchids. “I love how she places every single flower and intertwines them with the foliage,” Diana says.

Working with the tree

It wouldn’t be Christmas without a tree! “We get one from the Milford Rotary every year,” Diana says. “They know what we like, and will put a few big ones aside for us.” She has been collecting ornaments for years and has amassed quite an assortment. The tree was up and decorated with the basics when Van Guilder and her crew arrived. They worked off that, adding extra embellishments, which echoed and coordinated with elements found in the mantelpiece and the arrangements on the accent tables. “The tree has a large presence, but the under-decorated style keeps it from overwhelming the room,” Van Guilder says.

Diana could not have been more pleased with the results when she arrived back home after Van Guilder’s day of decorating. “She does amazing work and has a heart of gold,” Diana says.

“We were aiming to enhance her home and play off of her unique style voice in order to prepare her space to celebrate the season,” says Van Guilder—and judging by Diana’s reaction, they hit the mark! 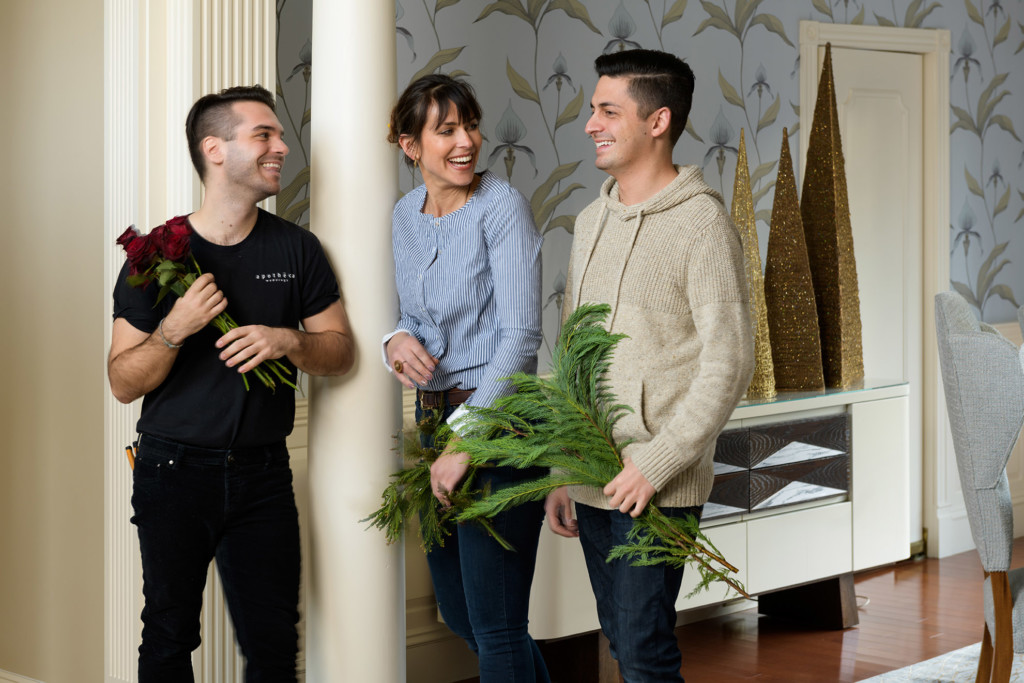 Alyssa Van Guilder (center) enjoys a laugh with two of her designers, Matthew Radwan (left) and Ricky Santiesteban (right). Pamela Lada (not pictured) did much of the behind-the-scenes prep work.

Alyssa Van Guilder opened Apotheca Flowers and Tea Chest in Goffstown in 2005 as a flower and gift shop with a tea bar. In 2008, they moved to their present location in Goffstown’s 1860s train station off Main Street, and added coffee, pastries and light lunches to the menu. In 2017, Apotheca invited A&E Roastery to take over the management of the café so Van Guilder could focus more fully on flowers.

Apotheca was voted 2019 Retail Florist of the Year by Florists’ Review Magazine and has started the Botanical Business Society, teaching other flower-loving entrepreneurs how to have successful flower businesses. Apotheca creates floral decorations for weddings, parties and other events. 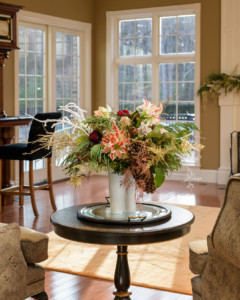 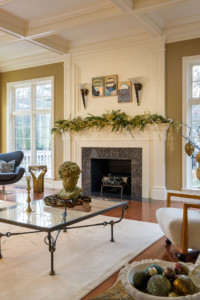 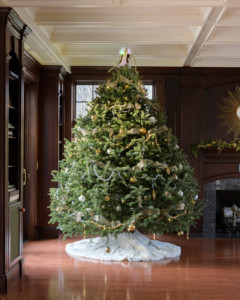