Connecting Past and Present

Thanks to Sheldon Pennoyer Architects in Concord, homeowners were able to marry a historic home to a new building and create a modern-style, award-winning New England farmhouse.

The living room is in the new addition and its glass sliders provide the mountain views the homeowners had hoped to enjoy.

During a visit to friends in the Monadnock area, a couple from outside Boston didn’t expect to fall in love with a nearby farm. But they did. One year later, when the property came on the market in May 2013, they put in an offer on the spot. “This wasn’t something we’d planned,” says the husband. “But in college, we dreamed of someday having a farm.” Being at the right place at the right time in their lives, “We jumped in with both feet,” he adds.

Though the farm is a spectacular property and offers magnificent views of Mount Monadnock from the farmhouse, that building had some issues. It was actually two houses that were joined. The original house was built circa 1815 in the valley by the dairy barn; in 1936, it was moved to the top of the hill, and in 1937, a Colonial-style addition was added.

While both houses were charming and beautifully finished, the couple wanted a central living space with more sunlight and access to the mountain views. The homeowners also wanted a building that was more efficient to heat. “Once our clients gave us the green light to rebuild the 1937 part of the home, we were able to come up with a design that met their needs,” says Sheldon Pennoyer, of Sheldon Pennoyer Architects in Concord. His design combined a light-filled modern addition with the older, timber-framed part of the house. “The new connector enables us to see both spaces together,” Pennoyer says. “It’s a delicate and natural way to bring the new to the old.”

Pennoyer’s efforts were so successful that he and his firm’s project designer, Jasmine Pinto, were acknowledged twice at the 2018 New Hampshire Home Design Awards. First was for Excellence in Architectural Design and second was for 2018 Home of the Year.

The wife, who studied architecture in college and worked in the field for several years, says the couple’s primary goals were keeping the 1815 house intact and building a modern farmhouse. “Maintaining that balance was the key,” she says. 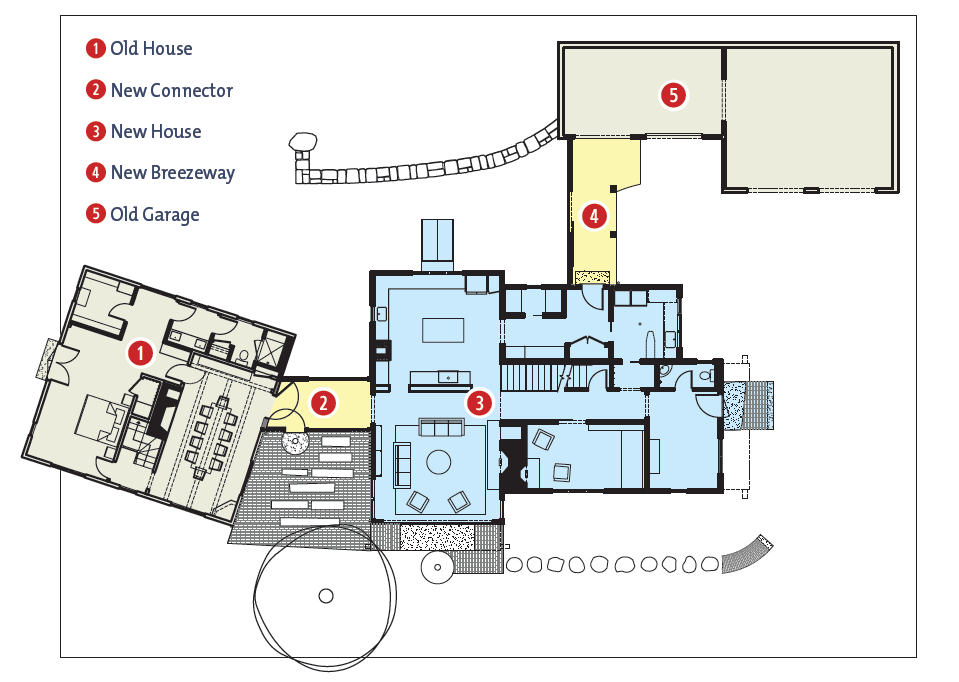 The husband, who met his future wife in a college architectural history class, is drawn to the modern aesthetic’s clean lines and lack of ornamentation. His parents’ flat-roofed house with expansive glass walls was designed by an architect from Marcel Breuer’s office and was subsequently named best house of 1957 by Architectural Record. “An ostentatious home wasn’t for me, and I also wanted to be respectful to the history of the farm,” the husband says. “In 2016, we hired Sheldon because he understood our goals.”

Although the 1937 house was taken down, lots of its pieces were repurposed. Its wide pine wainscoting and flooring are now cabinets in the kitchen and dining room, thanks to Woody Huntington of D. S. Huntington Company in Peterborough. The old front hall wall panels are now the head boards for beds in the guest rooms. Many doors were refinished and reused, as well as a pair of antique ship’s lights that were rewired and paired by the new front door. Pennoyer remembers saying, “Let’s save as much history as we can if we’re going to take down this building.”

Another one of the couple’s concerns was energy efficiency. “They wanted to use wood heat, and told us what energy targets to shoot for,” Pennoyer says. In addition to choosing a wood pellet boiler from Froling Energy in Peterborough, Pennoyer helped the homeowners think through a large photovoltaic solar array, which sits in the field just beyond the first-floor master suite in the old home. Although residential systems are typically 6 kW, this one is 9.35 kW and generates more electricity than the house consumes; the excess goes back into the grid.

To reduce heat gain on the home’s west side—the one with views of Mount Monadnock— Pennoyer and builder Timothy Groesbeck, of Groesbeck Construction in Peterborough, took great pains to keep a huge sugar maple near the new part of the house. “Tim’s team did a great job protecting that tree during construction,” the wife says.

Although the new building has simple, clean lines, its design does not skimp on details. “The details that Sheldon drew up, Tim knew how to build,” the wife says. “The two of them were very much in tune because they had worked on so many projects together.”

One of the design details that stands out is the staircase, mainly because of the material used. All the flooring in the new part of the house is made from red oak harvested from the property with help from forester Charles Koch in Jaffrey; the same wood is also used for the hand rails and the desktop at the top of the stairs. “You can see the wood edge of the stair when you’re standing nearby, and the lines are clean and perfect,” the wife says.

A second detail is the three industrial-style overhangs on the exterior walls; one is over the front door. “They remind me of something you’d see in a barn, and I like the way the tie bars attach to the house,” the wife says. “It’s pretty.”

A third is the way the living room and kitchen, which are located in the new part of the house, feel “almost loft-like” with their high ceilings and the wall of glass sliders facing Mount Monadnock. “When we have a dinner party, I love the transition into the dining room in the old part of the house,” the wife says. “The dining room is such a cozy space with its fireplace and seven-foot ceiling. It’s nice to have this contrast.”

The homeowners’ aesthetic for interior design mirrors the one they have for architecture—blending the old with the new. To help figure out how to place their furnishings—antiques from the wife’s family, modern pieces from the husband’s—the couple enlisted Phoebe Russell, of Lovejoy Interiors in Allston, Massachusetts. Russell also helped select all the paint colors and lighting as well as some specialty tile. 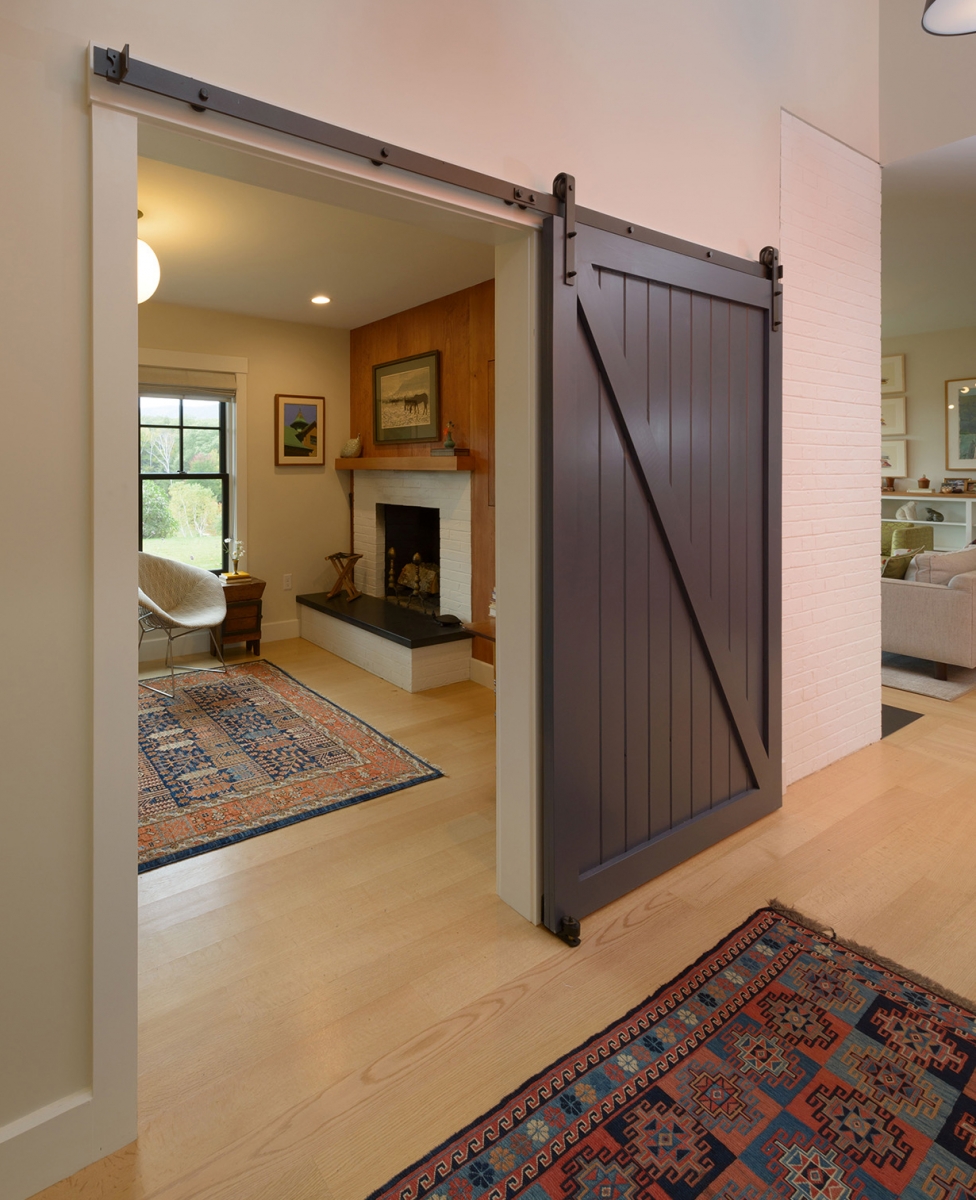 One of the reasons the wife said she wanted to work with Russell is because “she has a great color sense.” Russell chose a neutral white that she used throughout the house but also bold colors in other places, such as the orange wall along the stair off the kitchen. “She worked hard to get the right orange—it’s not too bright and not too dark, and looks good on both cloudy and sunny days,” the wife says.

Other colors are found in the guest bedrooms, which each have a color wall; on the dark-blue barn door and turquoise velvet chair in the den; and the mustard yellow and white herringbone floor tiles in the connector; and black and white tiles in the entry. “The colors are intentional and make a statement,” Russell says. “The homeowners’ collection of wonderful art helped dictate our palette.”

“Color really affects one’s energy level,” the wife adds. “It can calm you down or make you happy, or it catches your eye and can surprise you. The colors we chose are ones we’ve liked throughout our lives.”

After the homeowners bought the farm and began to think about its renovation, the wife collected a lot of design magazines. She’d clip pages and pin projects on Pinterest to help give Pennoyer and Russell ideas of what she and her husband wanted. “I kept tearing out photos of Moroccan tiles, and Phoebe said she knew just where to find those,” the wife says. “She saw what I liked and knew how to interpret it. The breezeway’s yellow and white tiles coordinate perfectly with the red oak floor, and the pattern in the front entry makes a perfect statement.”

Russell also helped the couple place their existing furniture, which included some chairs by Charles and Ray Eames along with a chair and a marble coffee table by Eero Saarinen from the husband’s parents’ house. Only the living room sofa is new.

For a modern touch, Russell selected a decorative light for every room. She kept the finishes consistent, choosing antiqued brass fixtures in the kitchen and living room, and blackened fixtures in the hall.

Pennoyer believes that the designs of the interior and exterior spaces are of equal impor- tance and take their cues from one another. Once he knew where the terraces were going, he enlisted Debra Shelley, of Shelley Landscaping & Masonry in Jaffrey, to help with the hardscape. “We found old pieces of granite on the land, which we layered out into the landscape, Pennoyer says. “That helped make the transition from the inside to the view.” Shelley also built the beautiful stone walls.

The wife is a talented gardener but wanted to plant what grows best in New Hampshire. She also wanted to create harmony and simplicity with the plantings, so she hired Laura Trowbridge, of Laura Trowbridge Garden Design in Peterborough. The wife had visited Trowbridge’s garden on a Garden Conservancy tour and knew others who spoke highly of her work.

The design of the gardens included perennials, shrubs and a Japanese stewartia tree. The wife also wanted annuals peppered throughout the beds, which allowed the perennials time to fill in. There were planters for the patio and hemlocks put in along the driveway. “The homeowners didn’t want overly formal landscaping,” Trowbridge says. “They wanted the feel of an old country farm.”

The homeowners were able to move in to their new house in May 2017, twelve months after construction began and in time to host their daughter’s wedding later that summer. “We always wanted a house where our children would want to come visit, a fun house our kids would enjoy,” the wife says. “We now have enough bedrooms so everyone can be comfortable, and space in the kitchen to cook together. We love to gather there, or in the dining room or living room.”

“We love everything about living in New Hampshire,” the husband adds. “The nearby mountains, the strong outdoor community, the local food movement, the artistic community. We look forward to doing more farming and being at home here.”

Left: The entry’s black and white tiles have a Moroccan feel.

Right: Just beyond the entry is the den. The transom windows carry light through the rooms.

Left: Above: The neutral palette of the living room highlights the artwork and view of Mount Monadnock.

Right: All the flooring in the new part of the house is made from red oak harvested from the property, with help from forester Charles Koch in Jaffrey. Woody Huntington, of D. S. Huntington Company in Peterborough, made the kitchen cabinets on the left from wide-pine wainscoting and flooring salvaged from the 1937 addition.

Right: The dining room is in the circa 1815 part of the house.

Left:  The upstairs bath has colorful floor tiles similar to others in the house.

Right: The second-floor landing in the addition provides space between the guestrooms as well as a workspace.

Left: The guest bedroom in the addition offers lovely morning views of the farm and mountains.

Right: Old pieces of granite were layered into the patio outside of the connector. The homeowners laud Timothy Groesbeck, of Groesbeck Construction in Peterborough, for protecting the huge sugar maple nearby during construction. 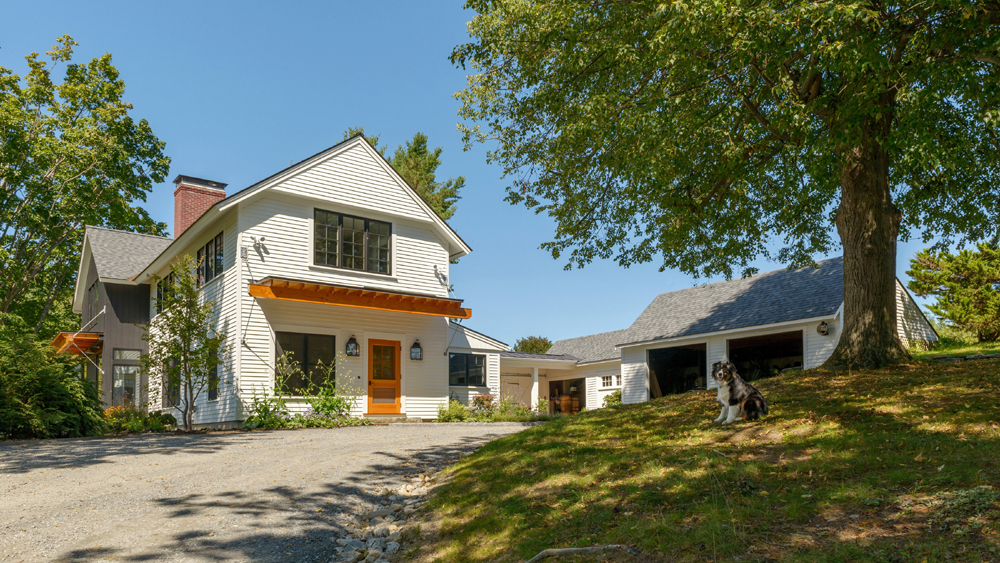